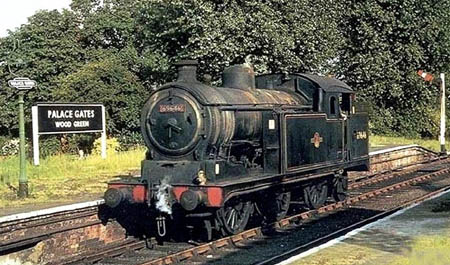 At the bottom of the three bay windowed Avenues (Northcott, Cornwall & Braemar) that lead off the A109 Bounds Green Road in North London, a quiet leafy pathway runs past the sheltered housing complex of Palace Gates into the junction of the two small parks of Avenue and Finsbury Gardens. The sheltered housing scheme takes its name from, and occupies the former site of, the terminus of a branch railway line that ran from Seven Sisters, and one that played a significant part in the development of the Wood Green area.

The Great Eastern Railway obtained Parliamentary approval in 1866 for a branch line to run from its existing Enfield line at Seven Sisters to the new leisure complex at Alexandra Palace being constructed at the time. Plans to link this railway with the Great Northern Railway’s branch line from Highgate to Alexandra Palace were thwarted by the cost of overcoming the steep gradients involved, and then by the fire which gutted the first Palace 17 days after it opened in 1873. A less ambitious suburban line terminating at a new station just 100 yards from the GNR’s existing station of Wood Green (now Alexandra Palace) was finally completed by the GER in 1878, with two intermediate stations at Green Lanes and West Green before it joined the main line into Liverpool Street at Seven Sisters junction. Both intermediate stations had small goods yards dealing mainly with solid fuels.

The Tottenham Civic Society have helpfully mapped the entire route of the line in the form of a printable flyer - see the references at the end of this page.

The name ‘Palace Gates’ was misleading as day-trippers hoping to access Ally Pally’s leisure facilities through the Dorset Road exit faced a stiff walk uphill in Victorian garb before they even caught site of their destination. Services initially ran into Liverpool Street, but improved rail network links led to the introduction of a regular service to North Woolwich in 1887, and this remained the mainstay of the line right up until its closure in 1963. It enabled people from the fast developing working class estate of Noel Park to access the docks and heavy industry of the East End as well as the munitions works at Woolwich Arsenal via ferry services over the Thames. The cheap early morning workman’s fares offered by the GER further fuelled house building activity along the line, and the increasing train use and development in that area was reflected in changes to the station name (Green Lanes in 1878, Green Lanes & Noel Park in 1884, Noel Park & Wood Green in 1902 and simply Noel Park by the time of closure in 1963). At its peak in 1936, the amalgamated LNER recorded 250,000 passengers using Noel Park station annually.

Although it was a terminus, Palace Gates was built as a through station. The line ran on to a locomotive depot with a turntable, water and coaling facilities, a goods yard and carriage sidings that covered some eight acres in total, stopping just short of the GNR’s Hertford North branch line before the Bounds Green Road bridge. The potential advantages of linking the two lines was not fully realised until the Second World War, and only then for purely utilitarian purposes. The imposing brick and gabled facade of Palace Gates station was obviously built to impress the hordes of tourists that unfortunately Alexandra Palace simply failed to attract. With the demolition of Nightingale Hall and the subsequent construction of the 3 Avenues on its grounds, the impressive vista of the main entrance and capacious booking hall was eventually hemmed in by suburban housing during the Edwardian period, reduced to opening onto a cramped pathway between Cornwall and Braemar Avenues. The previously mentioned footpath between Avenue and Finsbury Gardens ran under a subway beneath the line just before the beginning of the platforms, and the dip in the path is still evident today.

A more understated passenger and goods entrance to the other side of Palace Gates station was accessed via a gated forecourt on the corner of Dorset and Bridge Roads. On race days up until the advent of the Second World War, trains of horse boxes pulled by large exotic visiting locomotives would arrive with the grooms leading their steeds through a widened exit to walk up onto the roads leading down to the race track at Alexandra Park. At the north end of the station, the two 750ft platforms with 260ft of awnings apiece were linked by an imposing, fully enclosed and glazed footbridge. The two redbrick towers with goods lifts supporting this crossing were quaintly warmed by a fireplace at each end. This substantial structure was the unique and most distinctive feature of Palace Gates station. Good views of it can be found on Nick Catford’s Disused Stations website (see references below).

The following fantastic aerial view from 1930 shows a Liverpool Street train steaming out of Palace Gates and just about to cross the bridge over Park Avenue. The Wood Green (now Alexandra Palace) station complex built by the GNR is in the bottom left corner: 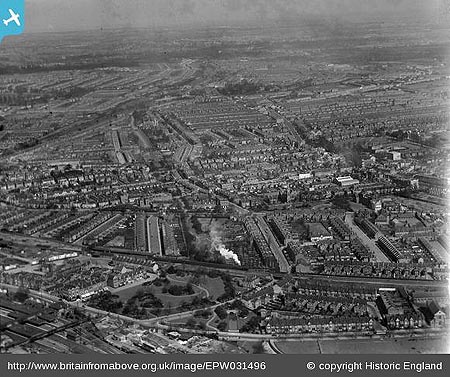 By the Edwardian period, the Palace Gates Line was at a peak with 41 arrivals from and 38 departures to Liverpool Street at half-hourly intervals (more frequent during rush hours) each day, an hourly service to and from North Woolwich plus off-peak goods traffic. Then, in 1920, the GER completely overhauled and intensified its suburban services from Liverpool Street, and also introduced a colour-coded system that differentiated first and second class coaches (yellow & blue banding) and had specifically coloured boards on the guard’s van to indicate the train’s destination. Palace Gates services were denoted by a fetching shade of pink. The resulting lurid colour scheme was described as ‘jazzy’ in the common parlance of the day and led to the whole operation being nicknamed ‘The Jazz Service’.

Two coach push-pull sets known as ‘autocoaches’ were also introduced at this time which allowed small tank engines to be operated by the driver from a cab in the rear coach with no reversing or run-around of the engine required at the each end of the line. The fireman remained on the engine footplate shovelling coal. These engines ran a half-hourly shuttle to Seven Sisters off-peak, but alternated with the Liverpool Street services to give a 10 minute train frequency in and out of Palace Gates during the rush hours (all in addition to the North Woolwich services). Modern residents in the area who currently complain of the noise of Inter-City trains being shunted at Bounds Green’s HST depot would likely have been struck deaf by the clanking, whistling, hissing, industrial cacophony that this volume of steam haulage would have produced practically 18 hours a day every weekday. All further compounded, of course, by similar noise levels emanating from the equally intense suburban shuttles and mainline express services thundering through the adjacent former GNR track. This was definitely not a locality for those of a nervous disposition.

The regular direct through trains to Liverpool Street had almost ceased by 1939 leaving the autocoach shuttle service link with Seven Sisters (where fast City bound connections could be made) but the North Woolwich service continued with 14 trains each way on weekdays in 1938 plus a generous hourly service late morning to early evening on Sundays. However, the outbreak of the Second World War and its aftermath marked the beginning of the Palace Gates line’s terminal decline. Wartime destruction of the Royal group of docks, City offices and the industrial base of London’s East End by the Luftwaffe, and the evacuation of many remaining businesses curtailed the North Woolwich service to peak time only. The Seven Sisters shuttle was withdrawn in 1942 with its brief over-optimistic post-war reprise in 1948 eventually halted by fuel shortages in 1951.

Post-War industrial reconstruction in the Blitzed areas was slow and demand for the North Woolwich service was further undermined by changes in employment patterns that were no longer concentrated in inner London. The last remaining once-daily direct service to Liverpool Street was withdrawn in 1947. Expanding electric tram and later trolley bus services had already started taking passengers on local journeys from Wood Green to Tottenham, Finsbury Park and Alexandra Palace East from the Edwardian era in direct competition with the railway route. Most damaging of all for the future of the branch was the 1932 opening of the Piccadilly Line extension through to Turnpike Lane, Wood Green and Bounds Green – competition which inevitably drew even more passengers away from the West Green, Noel Park and Palace Gates stations respectively.

The post-war increase in car ownership and commercial road haulage during the 1950’s and 1960’s further sealed the fate of the Palace Gates line. By the 1962 there were merely 6 trains to North Woolwich and 9 in the opposite direction at peak times only. The dirty ramshackle infrastructure, low uneconomic passenger numbers and poor service on the line seemed to characterise everything that the Beeching Report was shortly to condemn as wrong with the nation’s railway system. British Rail did not wait for the axeman’s report and announced closure.

The last passenger service ran into Palace Gates on Saturday 5th January 1963 – a special excursion for railway enthusiasts who had retained a special affection for the branch as one of the last steam operated lines in British Rail’s Eastern Region. Ironically, this last train was pulled by a diesel engine which then returned to Stratford empty – a rather sad and forlorn end to such a formative contributor to the area’s local heritage. Some freight operations continued until the end of 1964 by which time all the small goods yards along the line were closed. A large Charringtons coal depot continued on the old GER yard site at Palace Gates up until 1984 when the decline in the use of solid fuels finally led to its demise but its rail access was via the Hertford loop.

From Palace Gates, the line originally ran through Avenue Gardens and over Park Avenue on a bridge whose abutments are still visible today beside a pedestrian crossing. The continuing embankment between Park Avenue and Station Road has been overgrown with a beautiful and verdant grove of trees with unfortunately limited public access. The line then went over Station Road on another bridge through what is now the Public Library and onto yet another bridge to clear what is now the High Road in Wood Green. The high-level Noel Park station was situated on an embankment site subsequently built on for car parking in the modern Wood Green shopping complex (just south-west of the junction of Pelham Road and Gladstone Avenue). An architectural echo of the line can be seen in the modern pedestrian thoroughfare over the High Road that now links the two halves of the shopping and cinema complex and this is located just south of where the railway originally crossed the same road.

All of the bridges mentioned above were demolished after closure during the redevelopment of Wood Green in the 1960’s and most of the related railway architecture has also disappeared. However, Peter Kessler has traced and photographed what remains on the following website: http://www.historyfiles.co.uk/RailwayWalks/Britain/SevenSisters_PalaceGates/SevenSisters_PalaceGates01.html

Thank you to Richard Matz for providing the above article. Copyright remains with Richard Matz. The original version of this article was first published on the Bowes & Bounds Connected website on 13/10/2015 with added commentary from other contributors.