A Brief History of the GNR

By the 1840s, it was possible to travel from Yorkshire to London by rail but the journey was long and circuitous - via Derby and Rugby to Euston using the York & North Midland (Y&NMR), the North Midland (NMR), the Birmingham and Derby (B&DR) and the London and Birmingham (L&BR) railways, respectively.

The London & York Railway proposed a route from the capital heading directly north through Peterborough, Grantham and Doncaster with a loop line from Peterborough to Boston, Lincoln and Doncaster and branches to Sheffield and Wakefield. The renowned surveyor and civil engineer Joseph Locke performed the initial survey. The proposal met very stiff opposition from the group of lines mentioned above which were led by George Hudson, the so-called Railway King. Hudson employed every kind of delaying tactic imaginable. For instance, Locke was put under pressure and resigned his commission at short notice. Denison, on receipt of the resignation, acted very swiftly and employed another renowned civil engineer, William Cubitt, in a matter of days.

Once the bill was passed by parliament, the London & York name was dropped and the title "The Great Northern Railway" adopted.

It was decided to build the loop line (Peterborough - Lincoln) first because of proposed changes to Locke's original route of the main line. Construction of the northern end of the loop line was also deferred for similar reasons; running powers from Lincoln to Retford and from north of Doncaster to both York and Leeds being expedient at a time of economic slowdown. Although opposition from Hudson may have been expected, his demise was imminent and non was forthcoming. With Hudson out of the way, there was a strengthening of relationships with the Y&NMR and the other lines north of York. This upset the Midland Railway (the Midland Counties, B&DR and NMR had amalgamated to form the MR). At about this time, the Euston Square Confederacy was formed which continued the obstructions and dirty tricks initiated by Hudson. The leading figure of this alliance was Mark Huish, General Manager of the London & North Western Railway(LNWR), of which the L&BR was now part. Other confederates were the MR, the Lancashire & Yorkshire (L&YR), the Manchester, Sheffield & Lincolnshire (MS&LR) and the Edinburgh & Glasgow railways.

The line from London to Peterborough was built by Thomas Brassey. The initial climb out of London was stiff (for the period) with gradients of 1 in 105/110 for some miles. Thereafter, there were very few gradients exceeding 1 in 200 for significant stretches elsewhere on the main line. The King's Cross terminus was designed by Lewis Cubitt. 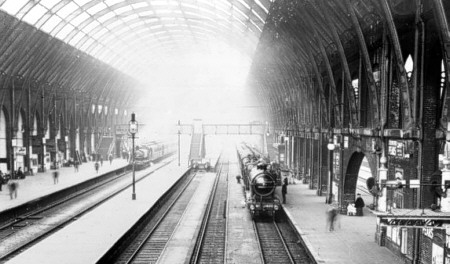 Once the link was completed and traffic started, the GNR started to gain a good reputation. Speed, comfort and reliability were paramount, even though the line was initially, anything but direct. Most importantly, the GNR started shipping coal to London; the first railway company to do so. The price of coal in London rapidly fell from 30 shillings per ton to 17 shillings per ton as a result.

An alliance (and later take-over) was formed with the Ambergate, Nottingham, Boston and Eastern Junction Railway. This enabled a London to Nottingham service to begin, What happened to the first train to run into the Midland Station at Nottingham is an example of the tricks the Euston Square confederacy would perpetrate. On arrival at Nottingham, the locomotive was surrounded by MR engines and was pulled and pushed into a disused shed; once there, a permanent way gang ripped up the track. It was months before the lawyers were able to get the engine released.

Then in 1856, the confederacy tried a rates war. The GNR reluctantly had to reduce its fares in accordance. However, the result was a remarkable success. As a result of the reductions, more people started using the GNR and realised that the service was much better than the competition and the takings doubled.

Finally, Huish tried some private negotiations with the GNR. The GNR made these public and the confederacy was broken. Shortly afterwards, an agreement with the MS&LR was made to run King's Cross Manchester trains. These were very successful and, despite the longer distance than the LNWR route, were often quicker. The LNWR again played some dirty tricks at London Road station in an attempt to obstruct this traffic.

Another area where the GNR had a significant presence was in west Yorkshire with many suburban lines in the Bradford/Halifax area, some jointly owned with the L&YR.

The North Eastern Railway (NER) completed their line from York to form an end-on junction with the GNR at Shaftholme thus completing what became familiar as the East Coast mainline until the Selby diversion of the 1980s. GNR stock was being used on most trains to Scotland, and in 1860, they proposed the setting up of the East Coast Joint Stock with the NER and the North British Railway (NBR). This helped to cement cordial relationships between the three companies.

Once most of the interference from the confederacy had subsided, the GNR started expanding. In the mid-1860s the direct line from Doncaster to Leeds was completed, some of which was joint with the MS&LR. In 1865, the company participated in the Cheshire Lines Committee (CLC) taking a one-third share. In 1867, the loop line was finally finished with the completion of the Gainsborough to Doncaster section.

There was also expansion in Nottinghamshire and Derbyshire giving access to more collieries. Colwich near Nottingham became, what would now be called, a freight concentration depot.

In 1876, there were two bad accidents at Abbot's Ripton and Arlesley. In due course, these lead to safety improvements on the GNR in signalling arrangements (absolute block), the introduction of the somersault signal and the adoption of the automatic vacuum brake.

After some years of discussions and objections, an agreement was reached with the Great Eastern Railway (GER) to build a line between Sleaford and Spalding. As part of the deal, much of the original loop line was taken into joint ownership but also included were some GER lines in Cambridgeshire. So the complete joint line stretched from St Ives (Cambs) through to Black Carr Junction, Doncaster.

One of the last significant expansions was the construction of a loop line from what had been the Enfield branch through to Langley near Stevenage. This line gave an alternative to the mainline, thus increasing capacity and also tapped some new sources of revenue. However, although the line was authorised in 1898, building did not start until 1906, and then only slowly; the Great War then intervened, so it was not completed until 1918.

Thank you Malcolm Peirson for the photograph of Kings Cross with C1 No. 4400.