The Aberford Railway: The Final Years

During the latter half of the 19th century and the first decade of the 20th century, various new developments led to growing output from the Garforth collieries. Growth was only interrupted occasionally by trade depressions and the major mining accidents which were usual in the coal industry at that time. The new Trench Pit was sunk in 1899-1900 and increased Garforth's output to 440,000 tons per year. 120,000 tons of this was being exported via Hull. This growth was also seen nationwide with the British coal industry reaching its peak in 1913. Both Garforth and the national coal industry were severely hit by World War 1. Many of the miners enlisted and sixty did not return. An export embargo continued many years after the Armistice.

Colonel Gascoigne died in 1905, and ownership passed to his son Colonel F.R.T.T. Gascoigne. With continuing problems, Colonel F.R.T.T. Gascoigne finally decided to sell the collieries after a five week strike in 1919. The Barnsley company of Wharncliffe Silkestone of Tankersley purchased the collieries in December 1920. These were organised as Garforth Collieries Ltd, and the sale included the Aberford Railway on a 60 year lease. They were bound to maintain the track and to repair any damage to the Light Arch. The lease included a condition that 'reasonable facilities' for public travel must be provided, and in return Colonel Gascoigne paid for £2000 of repairs to Empress including a new boiler. The company remained optimistic in 1921, even though Sisters Pit was virtually worked out and Isabella Pit had a limited amount of coal left. Air-powered mechanical cutters had been introduced, and the workings at Trench Pit were being extended. Garforth reserves were quoted as sufficient for a century of mining.

Unfortunately the relationship between the owners and managers declined, and by 1922 both were being served with over 100 summonses for various contraventions of the Coal Mines Acts. These included poor ventilation, lack of fire-fighting apparatus, and dangerous pony-ways. The management was heavily fined at hearings in March 1923, but the owners were able to prove that they had very little active part in the running of the pits. 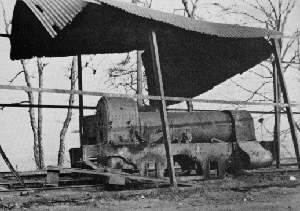 Despite the hearings, by March 1923 the collieries already had new owners. They had been sold to Old Silkstone of Dodworth, although the new board included three of the original directors. This sale included the lease of the Aberford Railway but the new owners saw very little use for it. Broken carriage windows were never replaced and the track was never maintained. Although Colonel Gascoigne had retained the right to run a passenger service, he never did. Soon the existing service only ran on market days, and the afternoon times became less convenient.

The Sisters and Isabella pits were worked out, at about the same time. Sisters pit was worked out in 1922 as expected. Ventilation and pumping were continued until the last of the Beeston seam was mined from Isabella in 1925. Despite the working out of these two pits, Garforth Collieries Ltd remained confident and sank the new Barnbow Colliery in the early 1920s. This mined the Beeston seam and used modern electric power. Coal was first raised in 1925. In 1927 the new colliery managed to hit the old workings operated by Sir Thomas Gascoigne in the 18th century, but survived the inevitable flooding with no loss of life. Both Barnbow and Trench found themselves in financial difficulties after the General Strike of 1926. Bankruptcy was declared in 1930 and the pits closed.

The final end for passenger traffic on the Aberford Fly Line was when Messrs Mouncey and Wilson began a new omnibus service between Aberford and Leeds. The daily service which used a Vulcan omnibus and a sixteen seat Chevrolet, was quickly joined by the competing Aberford Motor Co who operated two AEC omnibuses. Although these two companies would later combine to form the 'Red, White, & Blue', initially there was aggressive competition between them. The Aberford Railway could not survive with such competition, and finally closed in March 1924.

By this point, only Ignifier remained. Mulciber had been sold to Low Laithes Colliery in Wakefield in about 1911. Empress was sold to old Silkstone when the collieries closed. The last train was not marked in any particular way. Indeed we do not know its exact date. After the last train from Aberford, Ignifier was shunted into the Hawks Nest shed and forgotten about. Here, vandals and the weather reduced this fine little locomotive into scrap.

The ex-Midland coach survived longer and was photographed being used as a bungalow as late as 1947. It was reportedly burnt by a new owner in the early 1960s.

Next page: Route of the Aberford Railway.