The Aberford Railway: The Gascoignes

Although it is thought that the Romans extracted coal from the Garforth area for use in York, the first definite record of mining in the West Yorkshire coalfield was a 1262 lease in the Shippen area that included coal as part payment. There were a number of bell pits working the coal in the Garforth area by the 14th century.

By the 16th century, the Gascoigne family become a major force in the history of the Garforth coal industry. Descendents of Henry IV's Lord Chief Justice Sir William Gascoigne, the Gascoignes owned a large amount of the land in around Garforth. Records are sketchy at this time, although there was at least one mining legal dispute with the Duchy of Lancaster.

Detailed mining records for the Gascoignes start with the second baronet, Sir Thomas Gascoigne of Barnbow. In about 1640, Sir Thomas made notes about some of the pits in the area. Sir Thomas describes a system of water gates, a shaft pump, and drain; to drain a pit at Parlington Hollins. During the 1960s, this area was the site of an opencast mine, and a drainage sough much of the original workings were excavated. Abandoned tools found in the workings are now a part of the Wakefield Museum collection. The 17th century era workings were shown to have excavated almost 100% of the better quality coal. 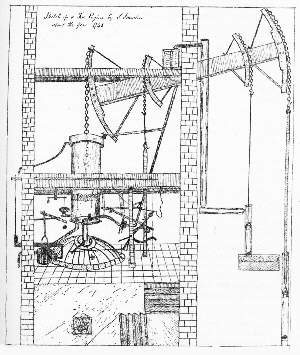 It is probable that the market for the coal was very limited. The coalfield extended to the south and west. Locations to the east could get cheaper coal by river. Coal from Tyneside and Wearside was sold as far south as York, so Sir Thomas Gascoigne could only sell coal to an area that included Wetherby and Tadcaster. Despite this limited market, the coal represented a significant mineral wealth and appears to have been the source of a number of local disputes amongst landowners in the area. By 1680, Sir Thomas Gascoigne is to be found on trial for his life for High Treason regarding the Barnbow Plot. Although usually interpreted as an illustration of the national politics of the day, the plot began amongst the local coal disputes. The accuser, Robert Belron was hired in 1674 as a steward for Sir Thomas's colliery.

Growth in the coal market was gradual during the 18th century, but accelerated after the invention of wrought iron in 1784. The geographic market remained limited for the Garforth collieries, but the collieries kept up to date with technical developments. The shallower beds were quickly exhausted, and workings moved deeper to seams that had to be pumped. The first pumps were powered by horses or water, but Garforth saw the use of some of the first Newcomen atmospheric engines. The fourth ever built, was erected at neighbouring Austhorpe Hall pit in 1714. A Newcomen engine was erected at Garforth in about 1740, and is thought to have been the engine sketched by John Smeaton in 1741.

By 1760, Garforth Colliery was started after a series of successful test borings to the Beeston seam. The colliery was located on the edge of Parlington Hollins at a site now occupied by the golf course. Some of the locations of the pit shafts, engines, and coal gins can still be made out in the form of mounds and dark soil. By 1774, the Garforth Colliery site had six operating pits.

In 1740 the Sturton estate (to the east) sank the first colliery into the concealed coalfield under the magnesian limestone. This was purchased by Sir Thomas Gascoigne (8th Baronet) in 1773. Even with the pumping engines, drainage could still be a problem, and the Sturton colliery's expansion was limited by a drainage sough. This sough ran over land still owned by the original owner, and she refused to allow it to be expanded. Unable to reach the lower seams, Sturton Colliery was worked out in the early 1800s.

The late 18th century was also marked by an increase in transport options. The Aire and Calder Navigation included transport to/from Leeds, and helped the development of a number of the Leeds-area collieries. This should have helped the Gascoigne collieries, because it could be reached via a 4 mile journey south from Sturton Colliery on Ermine Street. Unfortunately the route was blocked by other collieries who also had wagonways to the canal or the River Aire. Road transport to Leeds was also impossible due to the high turnpike fees. Hence all coal from Sturton had to travel up the Great North Road via Aberford. The area from Aberford northwards was primarily agricultural without any collieries, and represented a significant market. Sir Thomas Gascoigne planned a canal to Tadcaster and even acquired an Act in 1774. Realising that such a navigation would open the Wharfedale market to competing collieries, Sir Thomas abandoned the plan.

Next page: The Early 19th Century.