The Aberford Railway: The Railway

The Leeds and Selby Railway (L&S) opened on 22nd September 1834. This improved communications to Selby, but Richard Gascoigne found he was still unable to sell the Garforth coal to shipmasters in Selby due to undercutting from coal brought in by canal. Manston was equally affected, and together Gascoigne and Waud were able to negotiate a reduction in L&S freight charges. This helped and even allowed Gascoigne to sell some coal to the York market via the Ouse. 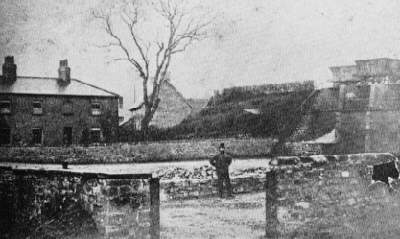 The Aberford Railway was also being constructed at the same time. Although first proposed in 1831, colliery developments took precedence and surveying did not start until 1833. The original survey by William Harker and William Walker had a continuous run dropping 100ft from Garforth to Aberford. The steepest point was a 1:72 bank down from the Sisters pit, compared to the shallowest gradient of 1:440 near Isabella. The continuous run allowed for gravity working down to Aberford, and horse working back up to Garforth. No Act of Parliament was required because the railway was a private venture over private land.

Boosted by the new collieries and the arrival of the L&S, the population of Garforth was growing during the 1830s. By this point, Aberford had declined in importance and was principally an agricultural centre and small market town on the Great North Road. Aberford's population was also growing, but at a much slower rate than Garforth and was quickly outstripped by Garforth. With the Great North Road attracting a wide variety of traffic through Aberford, Richard Oliver Gascoigne decided to open his mineral line to passenger traffic. Working as a branch on the L&S, it would become a link in the rail route from Aberford to Leeds.

The Aberford Railway is first mentioned in L&S minutes in October 1834. These record a request from Gascoigne's agent for a siding to be laid to the future Aberford Line. By November, Gascoigne was negotiating the exchange of traffic between the two lines. The L&S were initially hesitant, although this was probably because the proposed York & Leeds Railway was being surveyed at the same time. This would have also had a depot in Aberford, and may have used Gascoigne's line. In the event the York & Leeds was never built and the L&S agreed to match their train timings with the Aberford Railway's timings to allow for a smooth exchange of traffic. 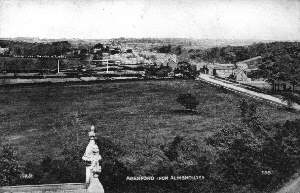 Records are scarce, but the Aberford Railway appears to have been built by Robert Kirkup who was also responsible for locomotive running on the L&S. Harker & Walker's drawings include track cross-sections indicating the use of edge rail fixed to stone blocks with cast-iron chairs at one yard intervals. Wharton's draft specification gives the alternative of wooden sleepers being acceptable. This could explain why virtually none of the required 10,000 stone blocks have been found. There are a number of stone sleeper blocks currently located under turf at the Aberford terminus, but these appear to be from an even older railway that used flanged tram-plate. This design was already out of date by the 1830s, and there is no reason for Gascoigne to change chosen it. There are no written records of this earlier tramway, and it is thought that it was a part of an unrecorded wagonway from Parlington Colliery to Aberford. Such a line would have become defunct with the closure of Parlington Colliery in 1822.

In April 1837, the Aberford Railway made an application to the Lord Commissioner of the Treasury to pay compounded duty rather than the standard rate, due to low passenger traffic and most of the passengers being carried gratis. Although this application described the Aberford Railway as a future railway, it was in fact already operational. Evidence for this is in the form of L&S minutes of 3rd March 1837 that describe traffic exchange delays between the two railways. There is also some suggestion that it might have opened to traffic as early as 1835.

Between February 1838 and February 1839, the Aberford Railway recorded a total distance of 2300 miles travelled. This works out at about 17-18 journeys a week, and is thought to represent both coal and passenger traffic. With the opening of the new railway, Gascoigne was able to recapture much of the northerly trade as intended. The Tadcaster market became almost entirely Gascoigne's, although Waud was able to retain a good share of the Wetherby and Knaresborough markets.

Early passengers were carried on a horse drawn wagon known as the 'High Flyer'. Built by the colliery carpenters who had little coach-building experience, the wagon was notably spartan. Wooden cross benches were used for seats, and lighting was supplied by three small windows on either side. The 'High Flyer' was attached to the end of a train of coal cauldrons. The brakeman sat on a platform on the 'High Flyer' and clanged a warning bell. A dandy cart was also attached behind the 'High Flyer'. For the journey to Aberford, the train only needed horse haulage up the bank from Sisters Yard. The horse was then uncoupled, and was trained to nimbly step on to the dandy cart as it passed down the hill towards Aberford.

Locally known as the 'Aberford Fly Line', the railway was entirely single track except the gradient between Isabella and Sisters. This had two tracks and a stationary engine. Even the lesser gradients could prove a problem for the horse in bad weather, and it was not unusual for the 'High Flyer' to arrive at Isabella with all of the passengers pushing the empty train! 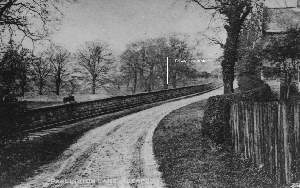 The York & Leeds Railway plan was reformed into the York & North Midland Railway (Y&NMR). Although a less direct route than originally planned, this opened as far as Milford in 1839 and was quickly used by the Garforth and Manston collieries to reach the lucrative York market. A more direct route would have been provided by Hudson's Leeds Extension which would have joined at Aberford, and use the Aberford Railway and L&S to reach Leeds. The extension was planned to compete with neighbouring companies, but was dropped after the companies ceased to exist or came under Hudson's control. Before the extension was dropped in 1848, a number of civil engineering structures had been built including a stone bridge over the River Wharfe at Tadcaster. This proved to be only a minor setback for the Garforth pits, as the rest of the Y&NM continued to expand during the late 1840s. 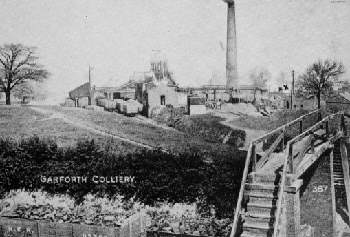 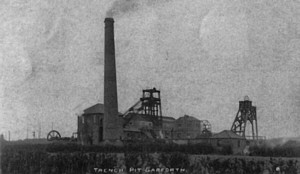 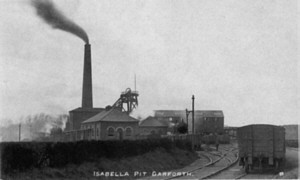 With the fall of George Hudson, the L&S re-opened to local traffic in 1850, and passenger services on the Aberford Railway were re-instated shortly afterwards.

Richard Oliver Gascoigne died in 1844. His daughter, Isabella, married Captain (later Colonel) F.C. Trench in 1850 who took the Gascoigne name. In 1852 Isabella's sister, Elizabeth, married Baron Ashtown (cousin of Capt. Trench). They took ownership of Lotherton Hall (near Aberford), but lived most of their lives on the Trench estates in Ireland. The colliery was jointly owned by the two families who operated it under the name of Gascoigne & Co.

The Y&NM (operator of the L&S) became a part of the new North Eastern Railway (NER) company in 1854. The Garforth passenger station appears to have been neglected during this period, and in 1860 the residents of Garforth were petitioning the NER for some very basic improvements. The station waiting room was actually the stationmaster's bedroom, and tickets had to be purchased from the kitchen window. Steps for passengers were also described as inadequate, and there were no sidings for goods traffic. Goods were usually shunted onto the Sisters pit siding with Sisters charging a toll of 6d per wagon.

A siding for 60 wagons was laid in 1865, but this did not satisfy the growing village. A completely new station was finally built in 1872, with some of the delays due to problems negotiating a sale price of some of Colonel Gascoigne's land. The combination of the new station and the Aberford Railway's purchase its first steam locomotive in 1870, moved the Aberford Railway into a new era of its life. This is discussed below.

Next page: The Introduction of Steam.