Most of the Aberford Railway was single track, although there were two tracks between Isabella and Sisters pits. This was a busy gradient and a stationary engine hauled cauldrons up to Sisters during the days of horse haulage. Today little can be seen of the Garforth end of the Railway, although the NER Station is still in use on the Leeds to Selby route which remains open. About all that remains of Isabella pit is the pit office which survives as Isabella Cottage. The line can be followed as a bridleway towards Parlington Hollins and eventually Aberford.

Excavations for new buildings at the Garforth end of the route, regularly dig into spoil from the Isabella and Sisters pits. 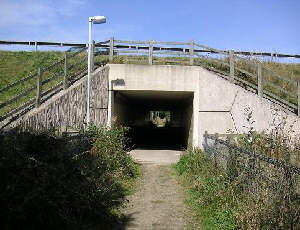 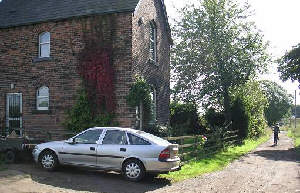 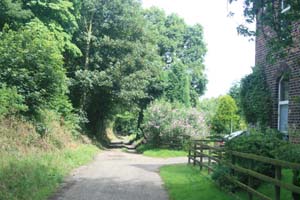 From Hawks Nest, the railway continues to Lily pit. This interval covered ground underlain by about 400yds of Slack Bank sandstone. Acting as a water reservoir, this rock was one of the main reasons for the early use of steam pumping engines in the Garforth area. This stretch of the railway was noted for regular flooding, and continues to be poorly drained today. A spoil heap and cottage survive at the Lily pit site. 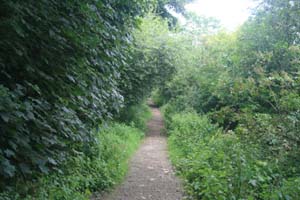 Immediately after Lily pit, the Aberford Railway crosses the site of the Parlington Colliery. This covered a wide area and coal fragments can reportedly still be found in the surrounding soil. The area was reforested during the 1960s, and a modern walker may have trouble following this section of the line. After the reforested area, the route crosses Parlington Hollins - a woodland that stood on the original Parlington estate. Through the Hollins, the line curves to the north-east in a shallow cutting towards Parlington Lane. This cutting was noted for flooding both during the days of steam, and today. Flooding does not appear to have been extensive as reports tell of the locomotives continuing to work through the flooded sections. Single-spike sleeper blocks have also been reported from this cutting. These are thought to have been from the unrecorded plate tramway that probably ran from Parlington Colliery to Aberford. 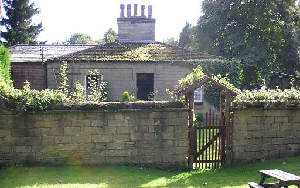 Beyond the cutting, the railway crossed Parlington Lane to reach the coal staithes and gasworks. Both had sidings, making this location the closest thing on the line that resembled an intermediate station. The gasworks building was adjacent to the gamekeeper's cottage, and is now used to store agricultural machinery. 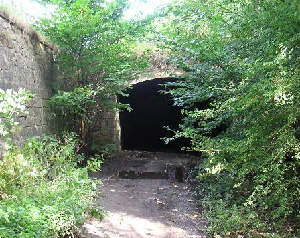 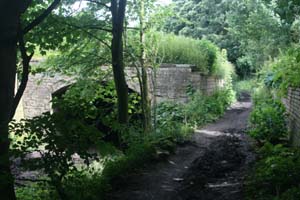 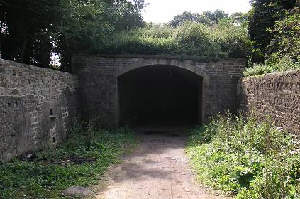 From the gasworks, the Aberford Railway descended towards the Dark Arch which still stands. This looks very much like a railway tunnel, but was built before the Aberford Railway was even thought of, and never carried the railway! The Dark Arch was built in 1813-4 and is thought to have replaced an earlier bridge. Wanting an un-interrupted view from the Parlington Hall lawn to the accompanying deer park, the Gascoignes filled a shallow valley and built the Dark Arch tunnel for Parlington Lane. This also had the advantage of hiding the dirty coal traffic from view. The railway passed to the south of the Dark Arch at the location of an existing sunken fence. 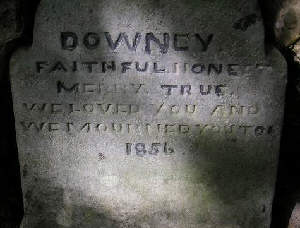 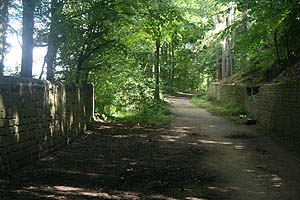 The Dark Arch has a curious memorial stone in the wall at its entrance. With a date of 1856 and a name of 'Downey', this may have been a family pet.

The remains of Parlington Hall can be see north west of the Dark Arch. After lying in ruins for many years, it was partially demolished in 1960. 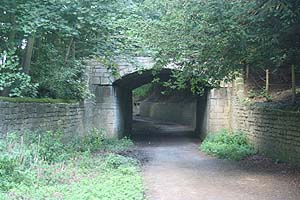 The railway then passes under the Light Arch. This arch also pre-dates the railway and is still standing. The Light Arch was built to take the park carriageway over Parlington Lane, separating the genteel carriages from the regular coal wagons heading to Aberford. When the Aberford Railway was built, it was also built through the Light Arch encroaching on Parlington Lane. The original arch was much lower but was rebuilt to accommodate trains. 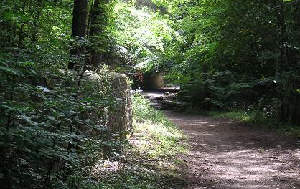 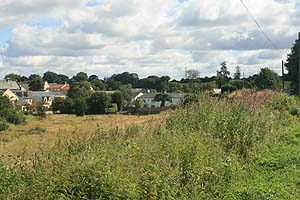 After the Light Arch, the railway passed a loading platform for Pinfold Quarry, before entering a cutting. After the cutting, the line dropped gently down to Aberford. The surrounding pasture gently drops into a shallow valley, leaving the railway supported by a retaining wall. This retaining wall still stands and incorporates a number of re-used sleeper blocks. After another 300yds, the railway reached the Aberford Terminus and coal staithes. The coal yard is now used by the lorries of Aberford Gravels Ltd. The station manager's house remains standing, and the weigh office and ticket window are reported to remain essentially intact. A gasworks was located on the opposite side of Aberford Main Street, but the last remnants were demolished during the 1960s. Aberford Main Street follows the route of Ermine Street, although its successor (the A1) now avoids the village.

Recent (2008) renovation work of Lotherton Hall by Leeds City Council has found ex-Aberford Railway sleepers in use as roof beams.

Next page: Further Reading and Acknowledgements.