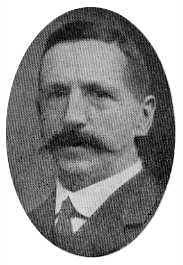 Born in 1862, Alfred John Hill became an apprentice at the GER's Stratford Works in 1877. Although young, he quickly showed his ability and won a Whitworth scholarship. By 1885 he was appointed to the position of Assistant Works Manager, and Manager of the Locomotive Carriage & Wagon Works in 1899. In 1912, he succeeded S.D. Holden to the position of Locomotive Superintendent. This position was retitled to Chief Mechanical Engineer in 1915. In 1917 Hill was awarded a CBE, and retired with the 1923 Grouping. Hill was Justice of the Peace for West Ham before retirement, and became Justice of the Peace for Bexhill-on-Sea afterwards. He died on 14th March 1927.

Hill's locomotive building was limited by World War 1, so his tenure was characterised by adapting and repairing. Despite this, he made many improvements including the building of a new foundry and a large engine repair shop at Stratford. Hill is probably best known for his N7 0-6-2T class which was continued by the LNER under Gresley. He also introduced the Robinson superheater to the GER.