This forum is for the discussion of the locomotives, motive power, and rolling stock of the LNER and its constituent companies.

Hi ,help information required re above as worked during 1924/48.What southern coaches were used,maunsell ? or older.Vivid memories of 1950/60 but to young to know pre war stock/formations.Thanks in anticipatioon,
Ron
Top

I believe the Banks/Carter book covers this in some detail, if you can get sight of a copy.
Top

offtherails wrote: ↑
Fri Nov 30, 2018 10:51 am
Hi ,help information required re above as worked during 1924/48.What southern coaches were used,maunsell ? or older.Vivid memories of 1950/60 but to young to know pre war stock/formations.Thanks in anticipatioon,
Ron

24 years is the duration of the Grouping period and all company stock evolved substantially over that time. There were through workings between Southampton and Bournemouth, but according to a 1930 East Coast carriage working Southampton-Glasgow was provided by a single Brake Composite (34 tons, 12 first:18 third seats) supplied by the North British (Southern Scottish Area) and the Bournemouth-Newcastle also by a Brake Composite (28 tons, 12 first:32 third seats) supplied alternately by the Great Central (Southern Area - Western Section) or the SR.
Top

Maunsell stock in this view: 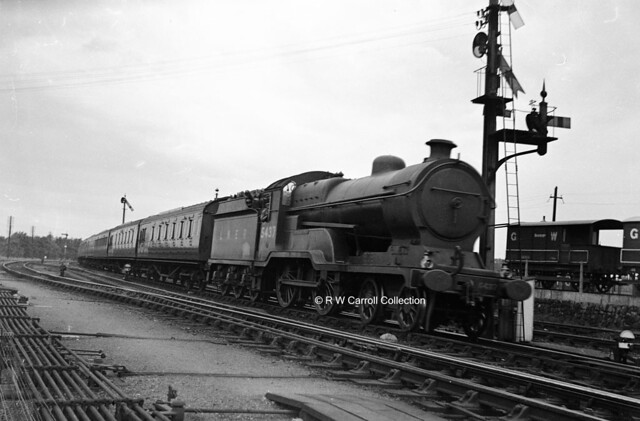 Thanks J W & 65447 for your info,great shot of D10 Prince George @ Banbury from Robert CWP.During the1950-1960s the southern coaches{ alternate days} we re hauled by an Oxford or Banbury HALL as far as leicester,Loco returning 1900 ish with a south bound FISH.As I intend to run said train on my LNER layout I wondered if GWR loco s were seen on this section of the Great Central between the wars.All information greatly received.
Ron
Top

From a later era I have some amateur archive film footage on dvds that feature the aforementioned train working at Bournemouth in 1967 featuring a Black 5 with B.R. Mk1s and also in 1965 just outside Basingstoke on the Beading line the same working again featuring another Black 5 and also a ex GWR Hall is seen also taking the Reading line although from memory I can't recall where the Hall was ultimately destined for without re-watching the dvd again?.
Top

Some notes I wrote about the train in BR days:

Fantastic piece of information,brings back memories of dashing out of school to watch said train thunder across the girder bridge.
Still hoping someone will dig up if GWR locos ran on GC metals 1924 till wartime,thanks for all replies so far,
Ron
Top
Post Reply
8 posts • Page 1 of 1