Post your photographs of the LNER and its Constituents here! Links to film/video are also welcome.

60822 photo 24629, on the up slow at a location often referred to as Hadley Woods though the overbridge is about 1/4 mile south of Greenwood Box whereas H Woods station is north of the tunnel. Train looks like ecs with ex works 1960 built Metro Cammell pullmans next the loco.

The rest i need locations for please

60919 photo 24624 - this was a 61B engine and one of the last V2s to be withdrawn. The location reminds me of Carmont south of Stonehaven. At the front of the train are 4 TPO vans from the west coast postal special, a very famous train featured in the film Night Mail. In the up direction the TPO Special was about 8.30 pm off Aberdeen, but this looks like a morning rather than an evening shot so I would say these vans are from the previous nights down train from Euston and the train is heading north rather than south.
Top

Flamingo there is a pic of the last V2 above 60836.
Hi interested in the area served by 52D. also researching colliery wagonways from same area.
Top

Neil, I presume you are making a personal collection of V2 photographs, mine aren't very good, but you have my permission to add these to your collection if you find them usefull.
In chronological order:

60881 at the Lincoln Goods Shed Open Day, 17/1/59, I intend to produce a topic about this event, when I find the original programme, and I have another pic of 60881 taken at the show, but you may think it's blighted by the image of Dad and I standing in front of the loco. 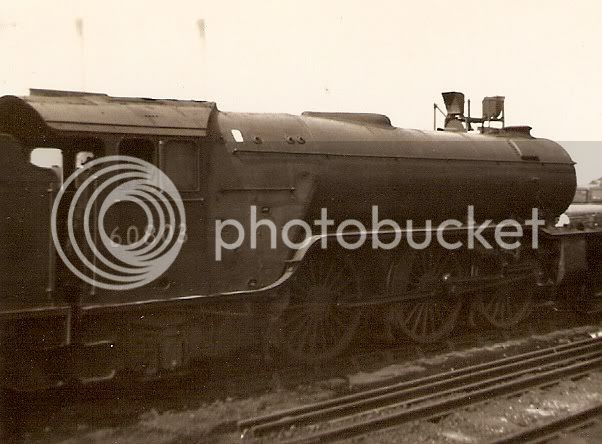 60803, taken at Doncaster, 20/4/60, from the window of the infamous Ian Allan works special from Nottingham Vic, the less said about that trip the better, or were other members on here conned that day, if so, I'd like to hear about it.

Neil,
(apologies if anything that follows duplicates previous returned info.)

60814 "24613" on Down Main at Welwyn North
60822 "24629" I think Greenwood, between Hadley Wood and New Barnet, on Up Slow, has already been identified. This spot was always known by local railwaymen as Folly Farm bridge.

60885 "24612" I have seen photos, some long time ago, with the distinctive signal which is by this train, before: Think it may be Barkston South Jn., on the Up line.

Neil,
A query : In trying to keep track/notes of which photo is which - is which location, in order create these replies; - something has been a little confusing, and I wonder whether it's correct, and/or you're aware of it.

Is this right?
Or is there some sort of numbering hiccup amongst your photos, which may cause you problems sooner or later? - - ( Rhetorical question only, if you wish it so.)
BZOH

60919 West Coast Postal at 15.30 ex Aberdeen, possibly between Aberdeen and Stonehaven in the area of Cove Bay. The engine took the PO vans on to Carstairs to connect with the main West Coast Postal from Glasgow and the passenger coaches came off at Perth, continuing independently to Glasgow Buchanan Street
Top

Neil
Sorry to revive this but I only just came here whilst looking for V2s. You seemed to have missed one of the replies, which was that http://www.steamlocomotives.photos.gb.n ... 24613.html was Welwyn North. Well, the caption has not been updated anyway. I concur, it is Welwyn North, taken from the footbridge looking south.

simonh wrote:Neil
Sorry to revive this but I only just came here whilst looking for V2s. You seemed to have missed one of the replies, which was that http://www.steamlocomotives.photos.gb.n ... 24613.html was Welwyn North. Well, the caption has not been updated anyway. I concur, it is Welwyn North, taken from the footbridge looking south.

Ooops Yes missed that reply, i have now updated the caption

Return to “LNER Photographs and Videos”