Behind the scenes for a few months I have been collaborating with Paul Craig (John Coffin of this Parish) to bring to life in 7mm scale one of his kits currently in the London Road Models 4mm range.

Paul very kindly offered to scale the D2 up for me and after a few etch supplier hiccups I received the test etches last week. This is a bit of a place holder because I have a couple of builds ahead of me before I can get my hands on this.

I am fortunate in that I already have a spare Gladiator Stirling Tender which these locos were paired with from time to time. I still need to order wheels and source castings but depending on which loco/what period I choose, most of them had been fitted with J6 chimney's and domes by the late 1920's. I can get these as spares from Gladiator if I need to.

More as it happens
Last edited by Robpulham on Mon May 10, 2021 8:47 am, edited 1 time in total.
Regards,
Rob
http://www.railway-models-and-art.co.uk
http://www.flickr.com/photos/robpulham/
Top

To further entice you, these are scans of the etches. 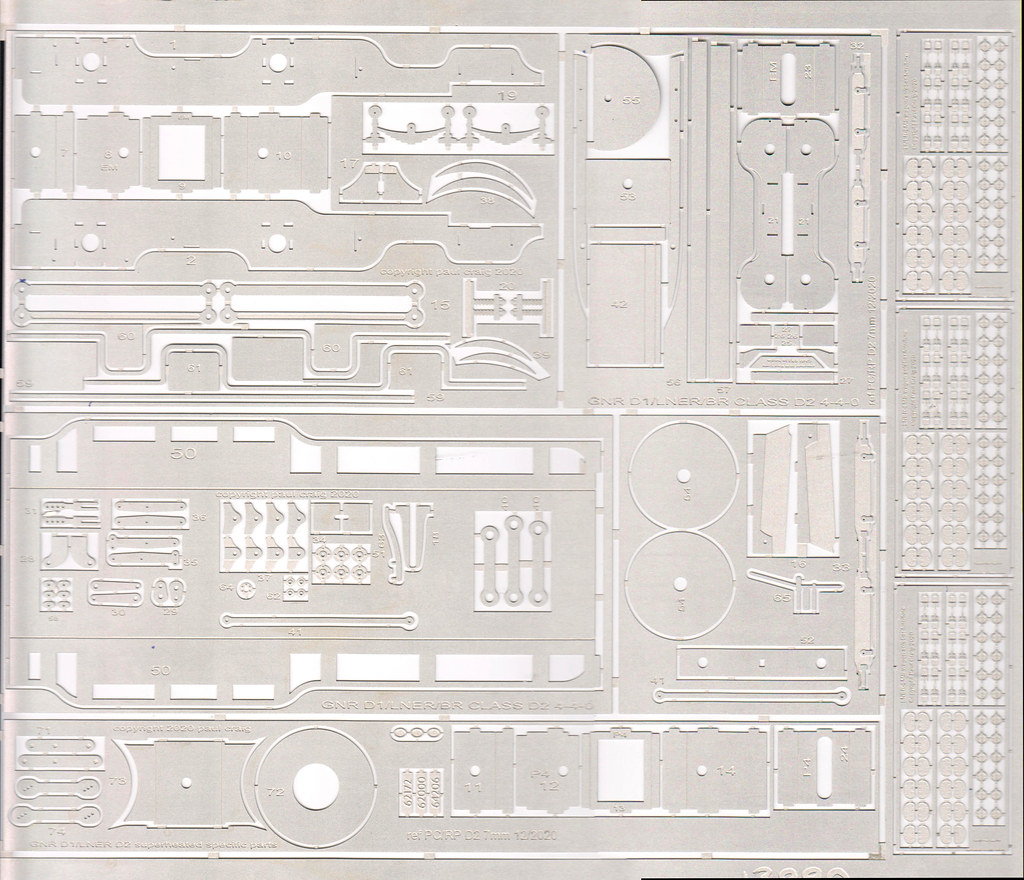 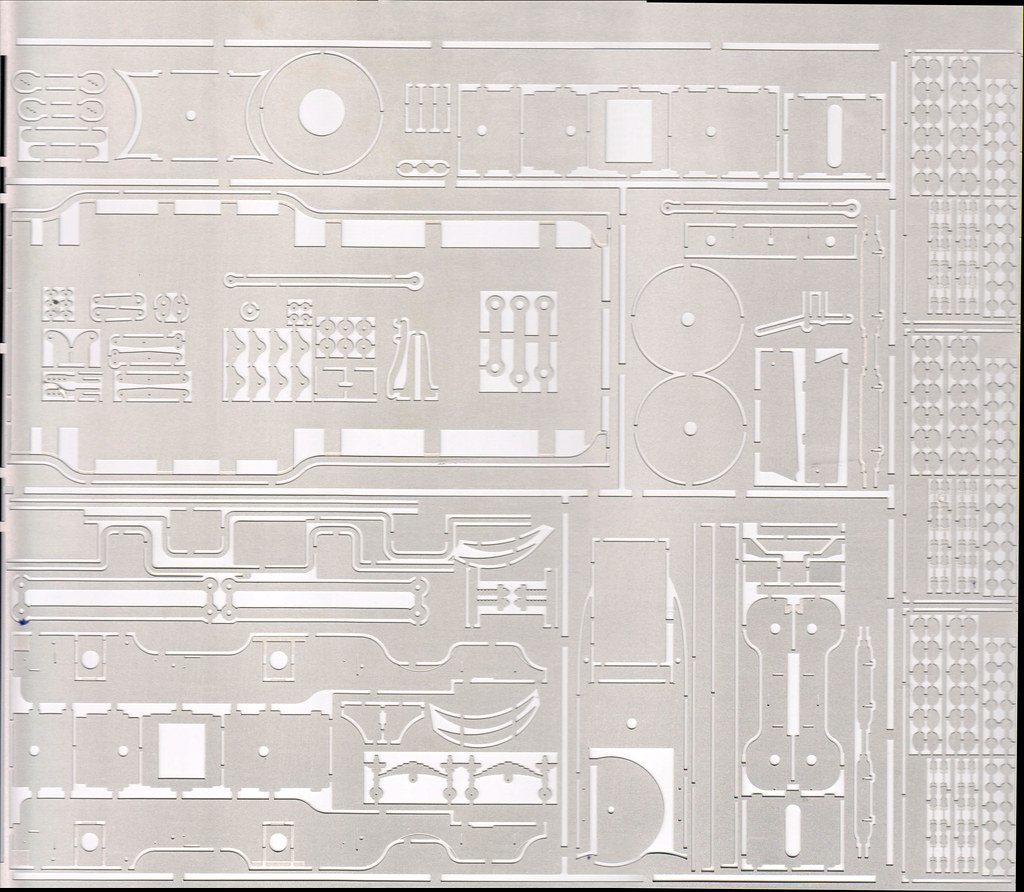 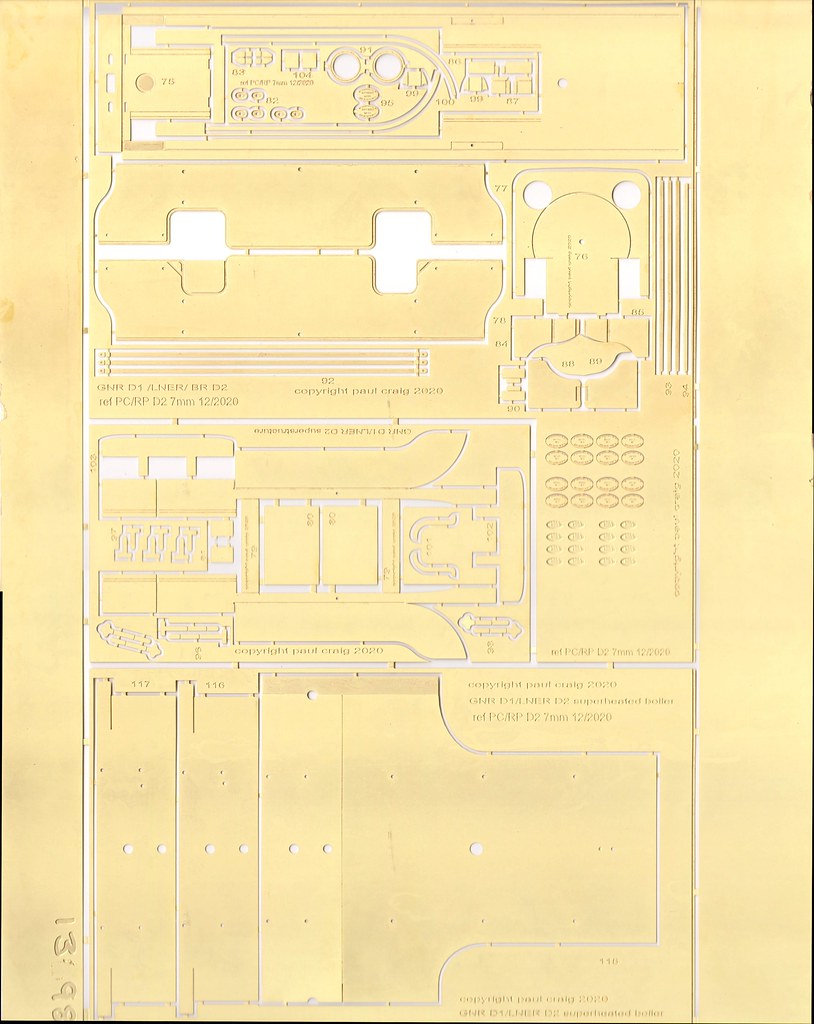 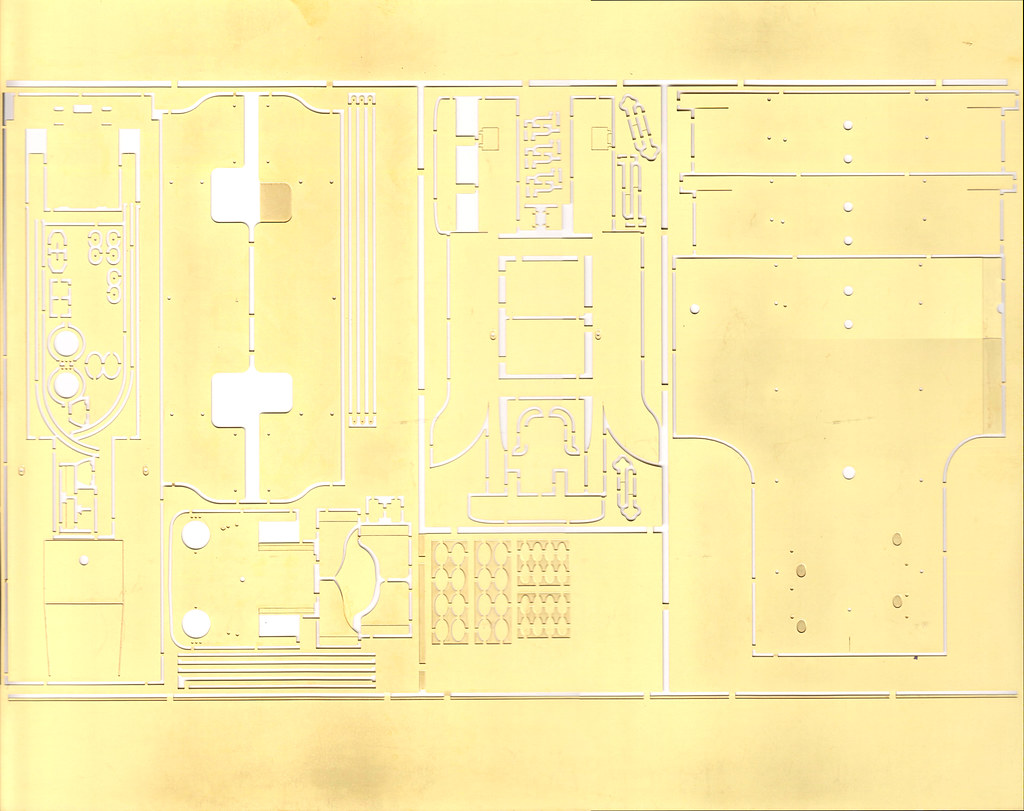 Although I am not quite at the point of officially starting this build I have been oranising the various castings and things needed for when I do get started. Many of the castings have come from David Hill at Gladiator, either from spares that came with the J6 kit or bought directly from him for this build.

One thing that I didn't buy was a whistle, I have long wanted to make such things and under the kind tutelage of Ian Middleditch a fellow Gauge O Guild member I have been playing with turning whistles.

First I made a form tool from a length of 3/16 silver steel rod (based it on a photo that Ian kindly sent me of some that he had made).

Next I drilled out the centre to take a 0.8mm rod and then roughed out the larger top part of the whistle.

I then parted it off and I took Ian's advice and put a length of 0.8mm rod in the tail chuck and through the hole in the part so that it didn't disappear into the mists when parted off.

Repeat the exercise for the bottom part and solder together on a length of rod with a 0.5mm spacer in between to create the whistle (I used a small piece of 20thou styrene with a hole and slot made in it to slip over the centre rod). 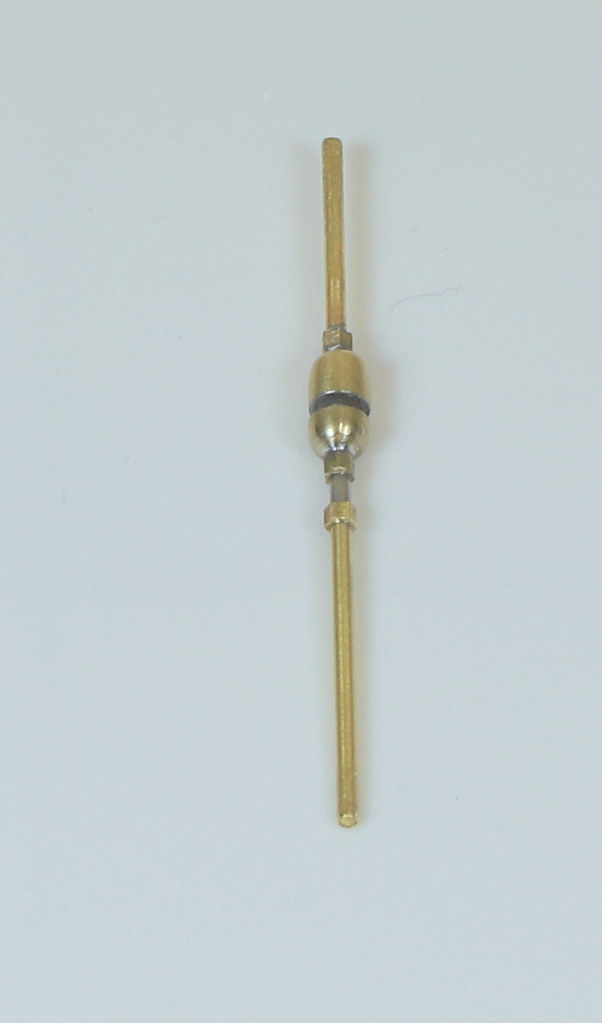 The nuts were added after the whistle was made up and are from microbore tube filed in a pin vice to a hexagon shape. 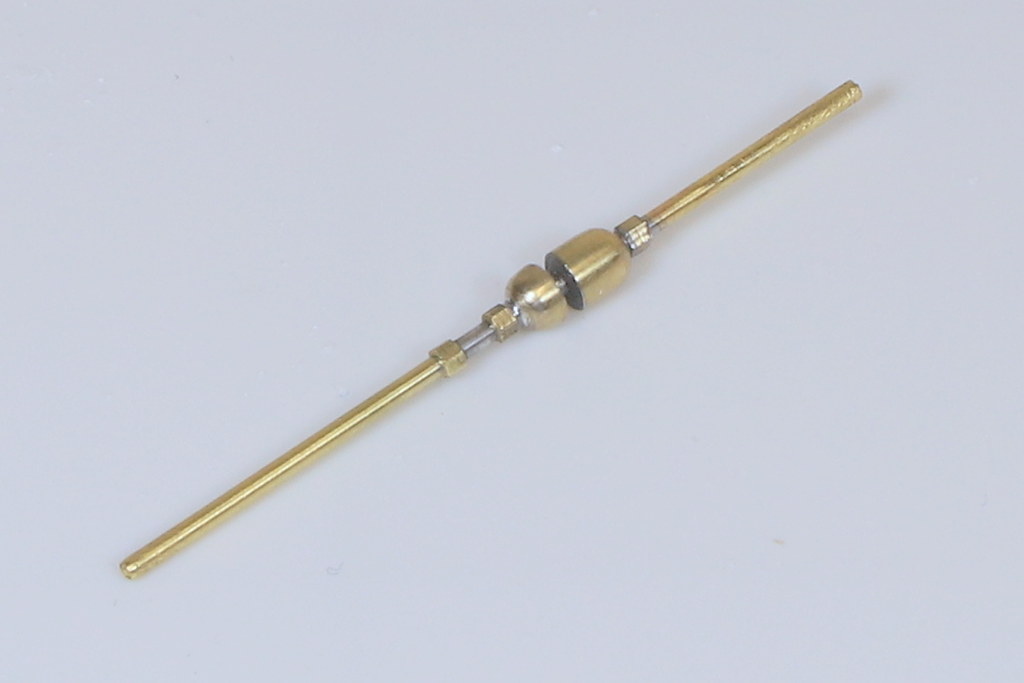 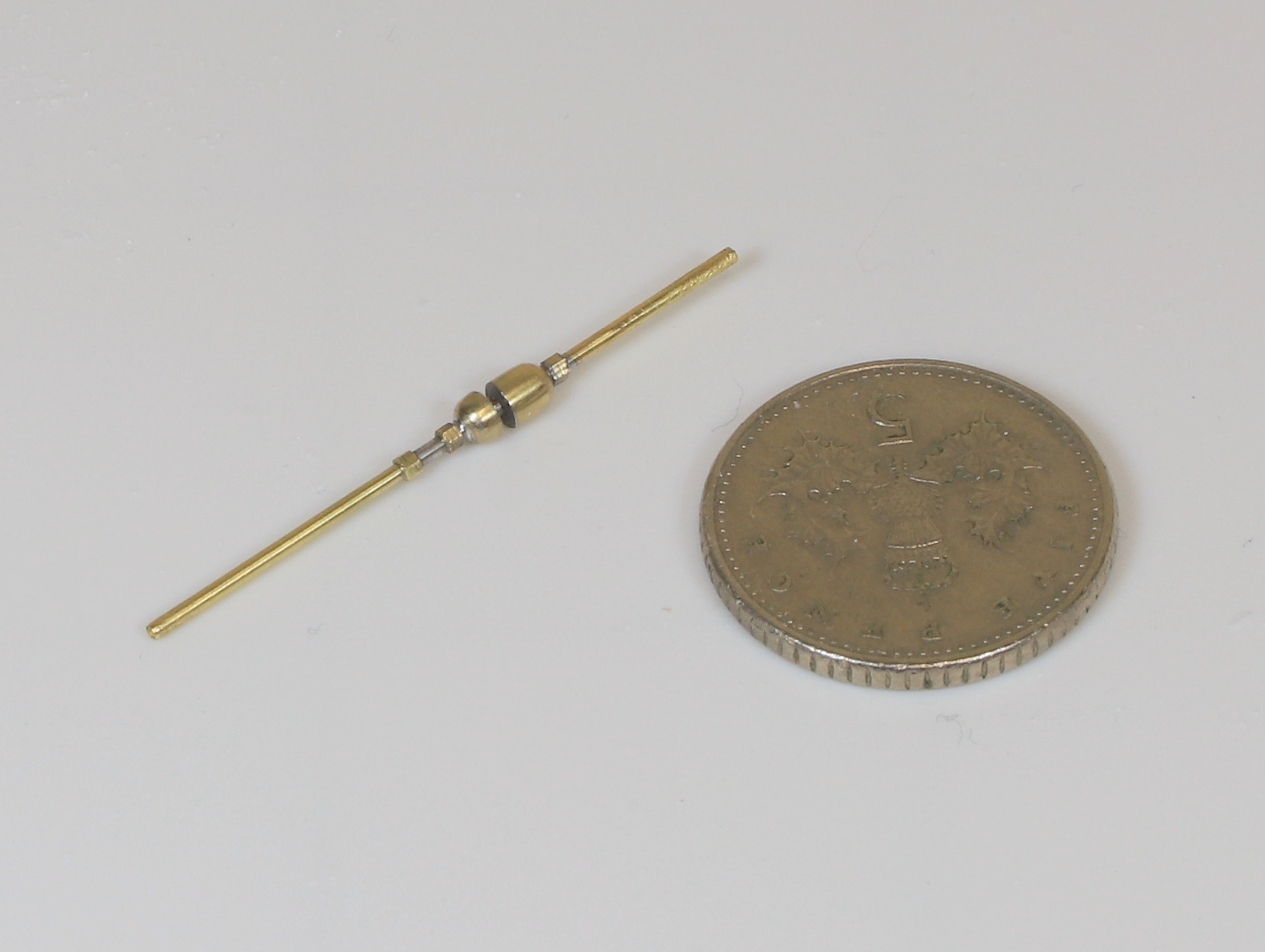 I'm looking forward to seeing this Rob, as Paul has mentioned this kit many times. Looks good so far, interesting use of home made tools, must remember and try it myself.
Top

Di you know if Paul intends to make this generally available?

Vernon, it is already available in4mm,
the reason behind this build is to see how easy it might be to convert to 7mm
then hopefully yes.

A fellow modeller asked me how I made my form tool for the whistle. I had already planned to make one to cut (if possible) globe lubricators.

I made one and it took a few refinements but I got there in the end. 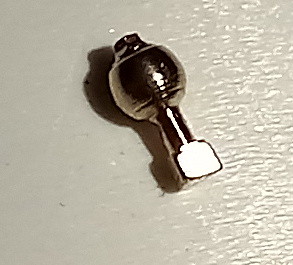 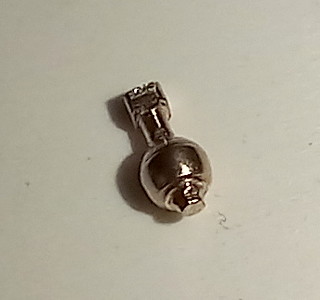 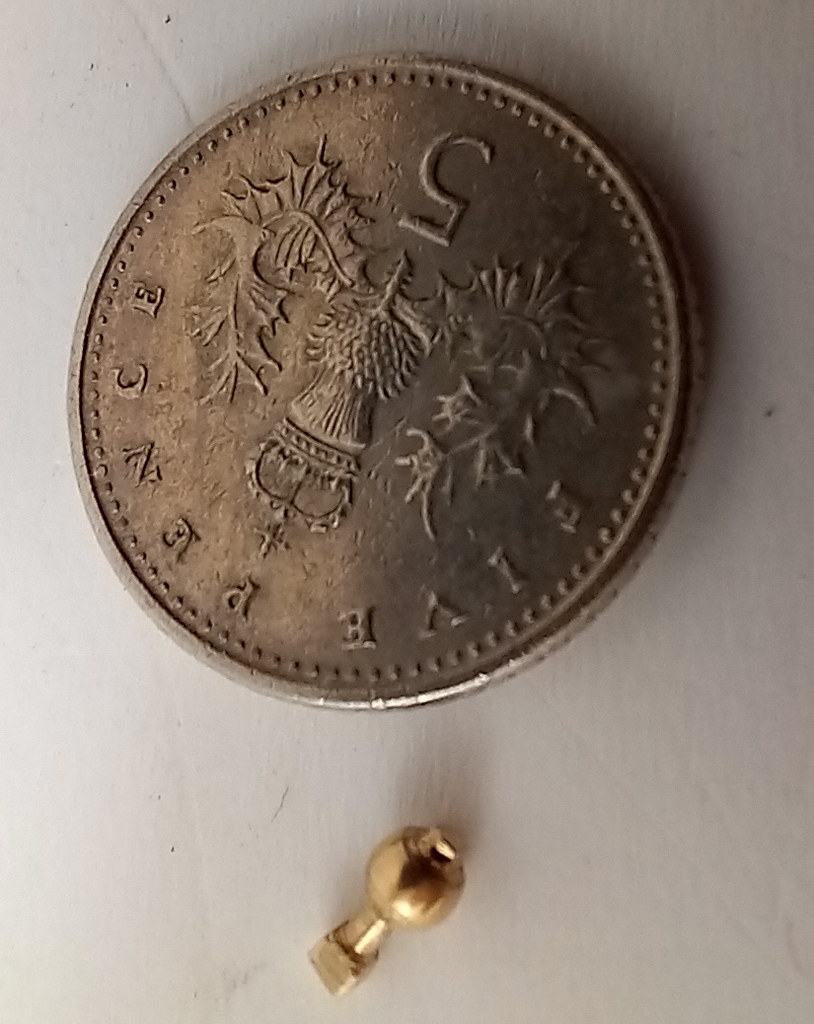 I realise that this may not necessarily fit in with many people's idea of Railway modelling per se, but I wrote up my method of making the form tool so if anyone is interested I will post up the words and accompanying photos.
Regards,
Rob
http://www.railway-models-and-art.co.uk
http://www.flickr.com/photos/robpulham/
Top

Further to my last post, when the brass bearings arrived I knocked one up into a lubricator to see how I would do it.

It was a bit interesting drilling out the bearing but following advice given I got a short length of tube the same diameter as my bearing and made a slit in it to make a split collet. This I gripped in one of the collets on the lathe and then I centre drilled it. Followed by drilling right through. They are slippery little blighters and one flew off into space as I was attempting to load into the lathe collet. Surprisingly I found it a couple of hours later.

I was fortunate to have some 1mm square bar in stock so I drilled right through one way and then half way on one side. When I fitted the rod through the bearing and into the square section I filed half of it away for the last millimetre which gave me a bit more room to solder the piece in that goes into the boiler. 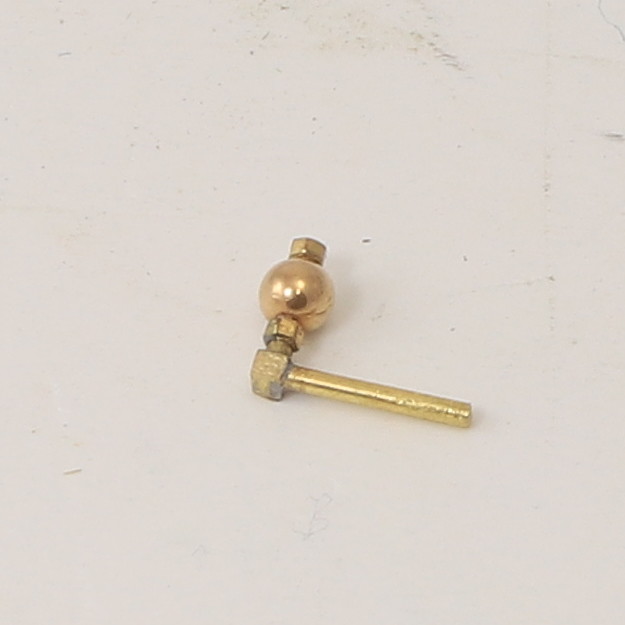 With the obligatory scaling piece. 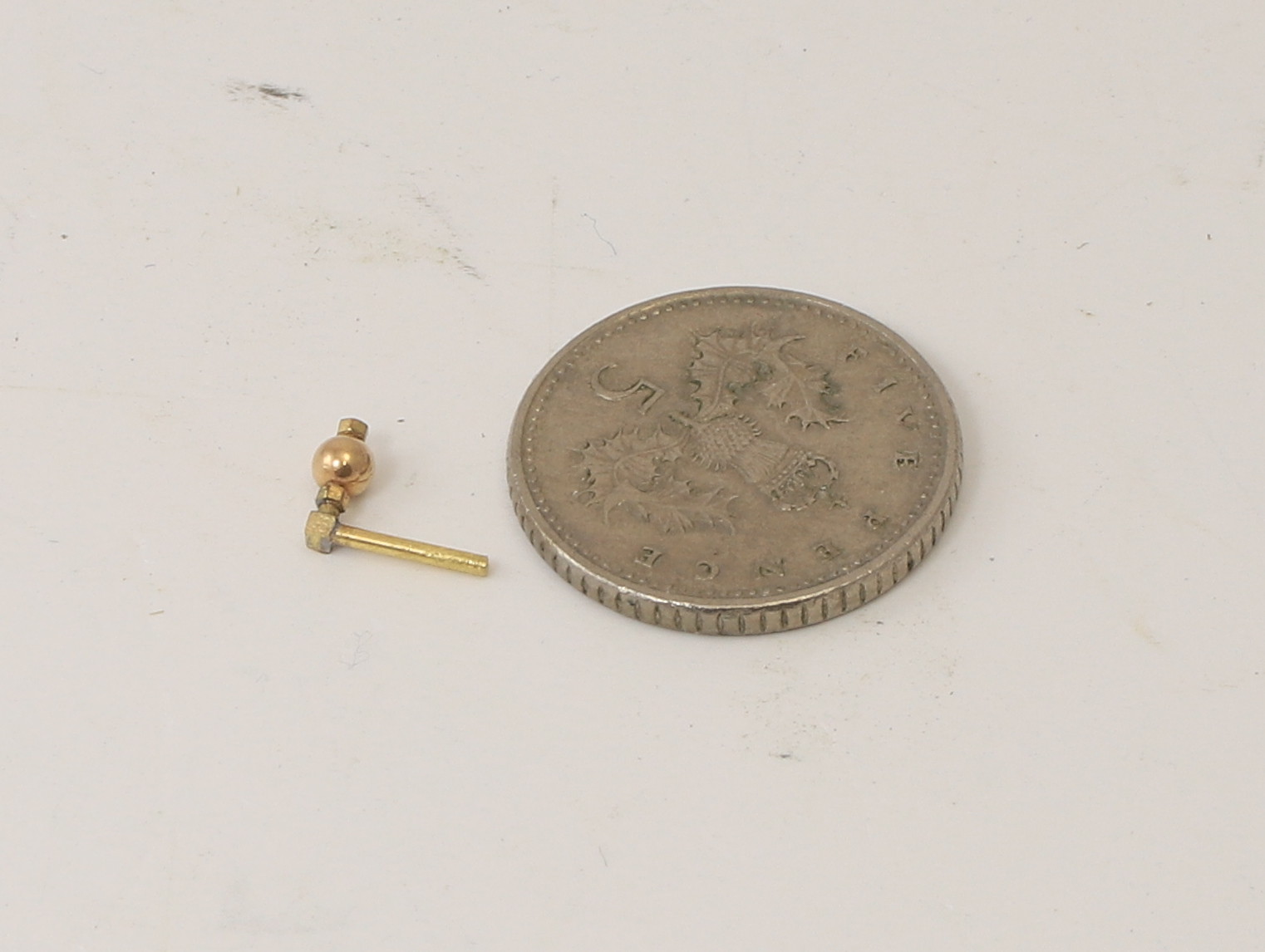 As with all such things in modelling making one is sometimes the easy part making another or several is more difficult. So it proved with the second one

I ruined one bearing when I hadn't quite tightened the collet enough and the bearing wasn't centred, then I didn't get enough solder on the cross pipe so that came adrift as I cut it short and I ended up having to re-drill it in the pillar drill before I could solder it back in.

But get a pair I did. My collection of bits for the D2 is slowly coming together. 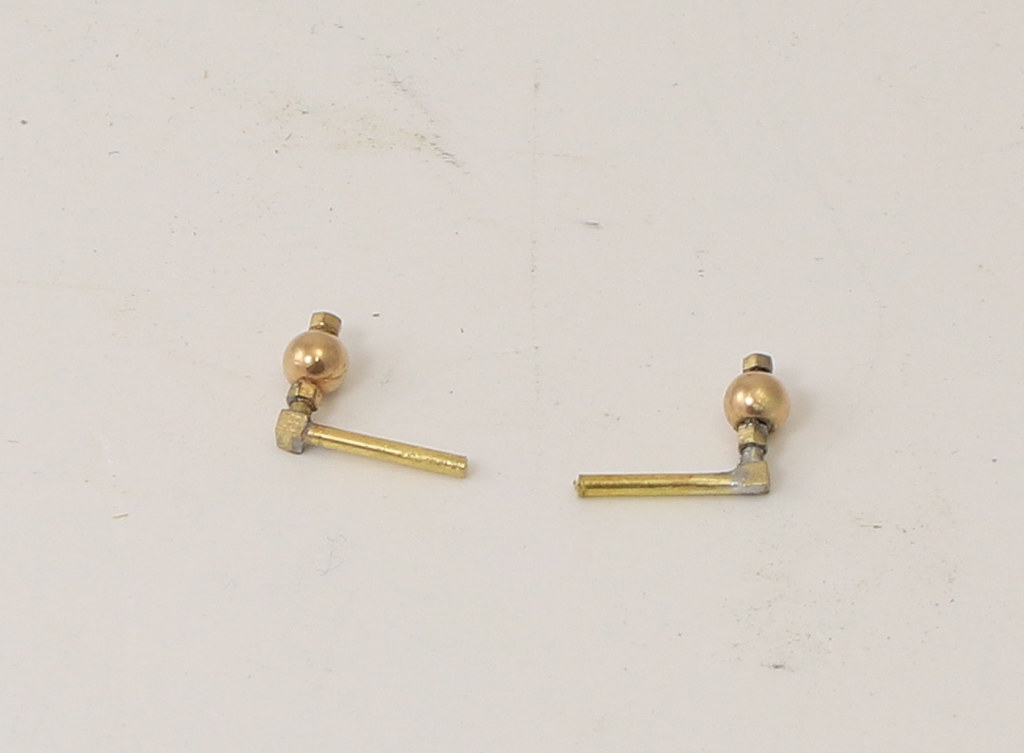 Have to say Rob,
that I hope the actual kit lives up to all the prep work you are doing

I have every faith in it Paul.

As to turning 4mm whistles, I am not sure. I am told that my lathe doesn't have a high enough top speed to turn sub 1mm items but I haven't tried it myself yet.
That said I have just scaled my working drawing for the whistle and that comes out at just over 1mm wide so it might be possible.

The most challenging bit I think will be drilling the centre 0.5mm for the stem.
I will have a go at some point this week.