Christmas came early today for me as the trader signs for the potato market arrived from Ben Weiner as well as the castings for the Handyside canopy supports from my colleague at Guy’s.
Tom Everitt’s 3DP columns were mounted for casting with a large wax feeder sprue on a sprue former and casting ring.

They were then invested in a very high temperature investment.

This was brought up to 900deg C to expand the investment and burn out the plastic. The investment expansion accommodates the shrinkage of the metal on cooling.

The metal ingots can be seen in the crucible with the hot casting ring in place. The metal is heated by induction to 1500 deg C.

At casting temperature the button of molten alloy can now be seen in the crucible.

It’s now been vacuum cast into the investment ring.

The exciting bit is when the ring is quenched and the castings divested.

The alloy used is shown here:

This sort of alloy is the stuff that some crowns and metal dentures are made of (as well as artificial hips). It’s about as strong as you can get in my trade and this little exercise was a test to see if it would be of use for student teaching purposes.
The final castings were minimally cleaned up with grit blasting to remove the investment, but the remaining green oxide layer may help paint adhesion - as will the ‘as cast’ surface. These columns can afford to have a bit of paint build up when sprayed as the top of the casting was quite heavy, in reality.

Trimming from the sprue and any adjustments will be done with diamond discs and burs, although this is a relatively soft Co Cr alloy compared to some. When fully fettled and painted, the columns will be attached with full strength epoxy resin adhesive. There is no way those columns are going to get bent!

Hope this is of some interest.
Tim
Top

The traders have now erected their name boards at the Kings Cross Potato Market. The signs were drawn up and printed by Ben Weiner: he even made the font specially for the job. The ‘traders’ are fairly obviously all people who are Club members or who have helped with the layout (or two of my grandchildren). The views under the canopy will not be possible, once the layout is fully assembled; indeed the supporting columns for the canopy (next job) will rather get in the way of the camera once they are in place. I think everyone must have gone to the refreshment club for a cup of tea...

This is the view that will be available: awaiting columns, wagons, carts, horses & people!

Thanks to everyone who has contributed to the model so far. CF really is a team effort.

I can only echo the last three contributors' comments - excellent stuff.
John. My spotting log website is now at https://spottinglogs.co.uk/spotting-rec ... s-70s-80s/
Top

The cast columns are now securely fitted to the canopy.  Locating them was going to be a bit of a challenge, but was helped by using some Evergreen styrene channel stuck to the beams. The ground position for the column was indicated using a simple jig.

The base of the columns was dug out through the styrene cobbled street to add a positive location.

The six columns were set in full strength, slow-setting, epoxy resin. This allowed time to ensure that they were plumb.

The columns are re-assuringly rigid and will allow the prototype photo that started off this whole area to be well reproduced in miniature. The Perspex screen is to also protect the end of the canopy and stop stray fingers.

Next job will be the railings on the main rooves.

Your work is pure art, to get that leave of detail in 2mm is breathe taking, my hat is well and truly dothed
oOo

Apologies for what is going to be a very long post. This was the state of play with the KX goods sheds up until two weeks ago.

However, I have been in correspondence with Malcolm Tucker, who knows a great deal about the KX Goods Yards. A little bit of knowledge can be a bad thing for some, i.e. me, and one of the comments he made was that the cart road was too low relative to York Road.  He was correct, of course, so I raised the whole section by 10mm and the scene was much improved. Unfortunately, this also raised the already tall long shed, especially in relation to the York Road viaduct,  simultaneously altering its horizontal relationship with the tracks going into the sheds. The solution to the height issue was to lower the roof of the main building by 17mm and take out the top story.

The roof was re-instated and a clerestory vent made by Alan Budgen, which actually then bring it back up by 10mm. That didn’t do much to help the relationship with the YR viaduct and track, so I chopped 90mm off the length of the building, to take it away from the road bridge. The height differences are very apparent when the two sections are juxtaposed.

The overall improvement by lowering the rear roof is, I think, quite significant. The raised 10mm is also apparent in this image: the gap at the baseboard end will obviously be filled in at some point.

The solution to how to handle the north end of the sheds is also just visible in this image; albeit only sketched in. The prototype had some large E-W canopies added in the 1890s and I thought that one of these would make an interesting addition at the north end.

On the prototype, these were supported and braced at one end by the walls of the potato warehouses and so a suitable wall was incorporated on the model. Ironically, it is the base of the chopped off building section and is more or less back where it started 7 years ago, when Mike Randall started off the whole scene.

A placeholder building can be seen, to give some idea of the effect aimed for.

This placeholder has a roof pitch that is too shallow and is 10mm over wide. The actual model will be of etched construction, courtesy of Jim Watt, because this roof was mainly glass.  The view through to the yard below should look quite effective.

The benefit of raising of the whole area becomes apparent when you look at the cart road canopies. They can now be seen underneath, albeit an intriguing view, but at least the new vehicles and horses will be more visible.

Finally, in this early morning deserted view one can see that the streets around Copenhagen Fields have quite a lot of cr@p on them, despite comments to the contrary from some quarters.

Worth all the effort? I hope so... the layout will be erected for the first time in over a years his weekend.

The saga of the goods yard rumbles on, with the extension of the Eastern Transit Shed(ish).

This was trial fitted on the layout last Thursday evening.

The shift rearwards of the back scene will allow the various huts and the round house to be better positioned and more visible from the front. Quite appropriately, a Refreshment Club mug was used to mark out the recess for the model building on the end wall of the transit shed.

The somewhat ugly far ‘leg’ of the main shed was hidden by an internal office structure made with clapboard: these show in some images of the prototype.

This whole assembly will be masked a bit by Jim Watt’s new canopy (shown as a ply rectangle in the first image above), but it will all look very interesting.

If you want to see all of this new work and get a good viewing of the layout, then the following may be of interest:
https://www.themodelrailwayclub.org/sho ... the-scenes
We are also producing a booklet about the layout, to be launched at this event.

Our 20-page booklet describing the history and making of CF has now arrived from the printers. Apart form some rambling commentary, it features excellent photos taken by Tony Wright, Craig Tiley & Barry Norman and was put together by Ben Weiner. It is nice and big at A4 size (whatever else!) and printed on good quality paper. Copies will be given to attendees at our CF mini exhibition on 10-11th July and will also be available through the Club shop at £3 + £1.50 p&p - or collect from the Club. The mini-exhibition is now sold out.

The latest addition to the layout is from Cornwall: Goods & Mineral Junction signal box, by the hand of Matthew Wald for the main structure & Jim Watt for the etched stairs, barge boards & lever frame (which is almost impossible to see).

With such a superb building now made, the surrounding areas - especially the ramp line up to the Caledonian Goods & Coal Yard - will need to be brought up to the same standard.

Well that was a very busy weekend. The MRC staged our first Copenhagen Fields mini exhibition. My daughter made some excellent cakes, the booklet looked good and I gave the opening talk and description of the layout 14 times. We had some very interested visitors: Tim Dunn the TV presenter was the last (but not least). I suspect that from the feedback we received, it will happen again; I think everyone appreciated getting really close to the layout and seeing the hundreds of cameos within the scenery, the trains were almost incidental. There were also a lot of local visitors, which makes it well worthwhile.

https://youtu.be/YrTmQL9Xz94
Matthew’s signal box required a last minute remake of the nearby civil engineering structure before the mini exhibition, involving shifting an arch by 30mm and thinning the structure by about 6mm.

This allowed width for the ladder, balcony and signal box toilet. 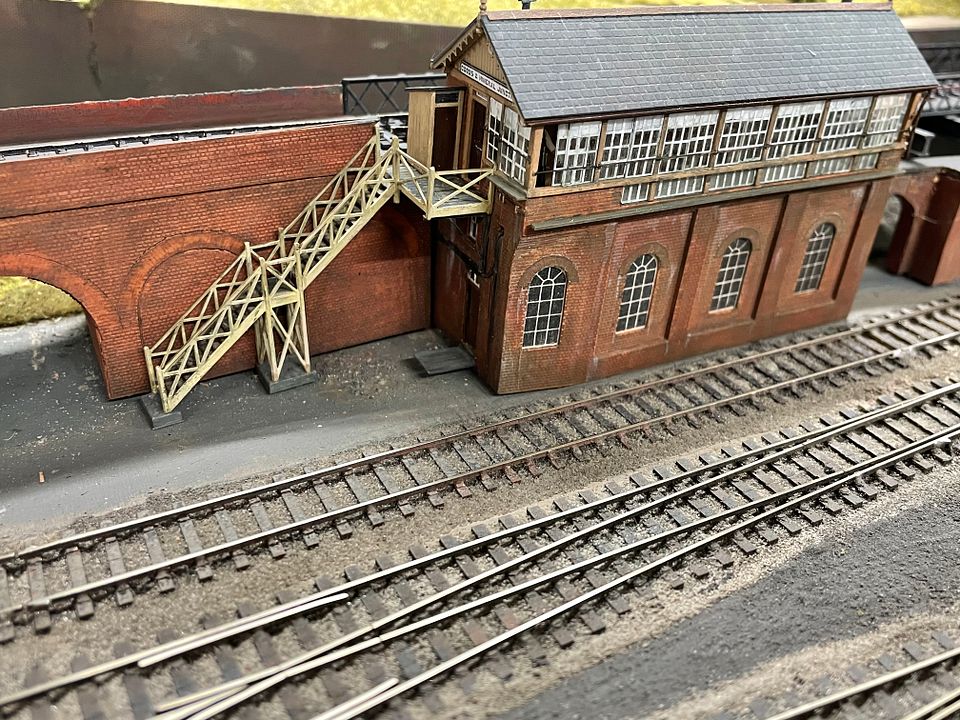 There is a great deal of detail to go in around the box, not least a chimney protruding from the ‘office’ below the ramp line! (photo by George Pring, courtesy the late David Challis - please respect copyright.)
That bracket signal is a strong contender for the next signal on the layout.

​
We had a useful CF photo shoot today with Phil Parker. Valour also had its first run.

Both locos painted by Ian Rathbone.

Should be a really useful (dark) green engine.