Another item finished for the weekend. I was gifted this some time ago. It's an ECJS XBV, produced by a chap who sells through Shapeways. Honestly, I couldn't recommend it as the finish was appalling and in addition it's not accurate (there should be a single door to the right of the ducket on both sides. Not to look a gift horse in the mouth, though, it struck me as a suitable candidate for a coupling adaptor van rather than the Bachmann fish vans we tend to use in extremis. So here it is, multiple coats of paint later in an attempt to fill the striations and with the ECJS number as we have not been able to locate the NER renumbering it was given in 1922 when transferred to that company's stock.

It's unusual, if nothing else.
Top

You seem to have made a good finish of it despite its flaws! Is this from the "Recreation21" account? I've often seen the huge variety of things on there and wondered what they would be like in the flesh. Do you have any "before" photos of the finish as received?
Top

The dark side has recently mentioned, the very excessive prices now being charged for postage etc, and then being taxed on arrival in the UK as well.

Recreation21. That's the fellow. Now, in fairness I should say that i didn't order this print, so I don't know what material was specified. I also don't know how old it is, so I can't say what the limitations of available materials were at the time. But it was a poor print.

I did have some brief contact with him through RMWeb when he decided he would do some 6 wheelers to go with the Stirling Single. I'd built my train, so I knew what was required, but when I offered diagram numbers and details, he replied that he was doing vehicles which 'looked about right' or some such phrase. I gave up after that. As I've said, there's a glaring error on this model for which there's little excuse. The missing door is clearly shown on the drawing in Hoole and I know he's seen the Hoole book as he uses the text from the drawing word for word on the Shapeways page for this print.

WRT Shapeways in general, their postage costs have always been astronomical but have now gone beyond ridiculous. The last time I looked at ordering I checked to see whether it was cheaper to have something sent to France where a family member could forward it and they wanted more postage from the Netherlands to France than their US site wanted to the same address. I've been told they're trying to put off private customers so they can concentrate on industrial work. Well, they're going about it the right way.
Top

We had some visitors to the test track at the weekend.

Mr King brought some of his newest work along as part of the collective journey to the Grantham running weekend. I'll let him give full details - the J21 has been pretty thoroughly covered already - but this is what we were treated to: 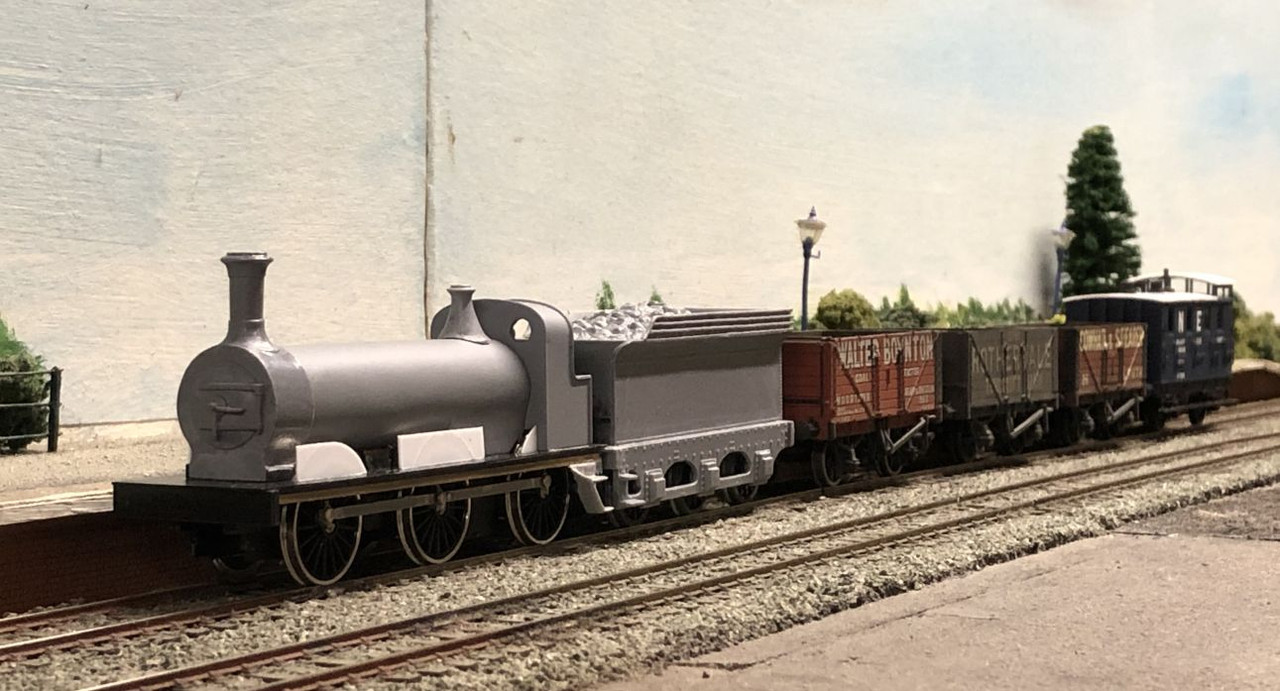 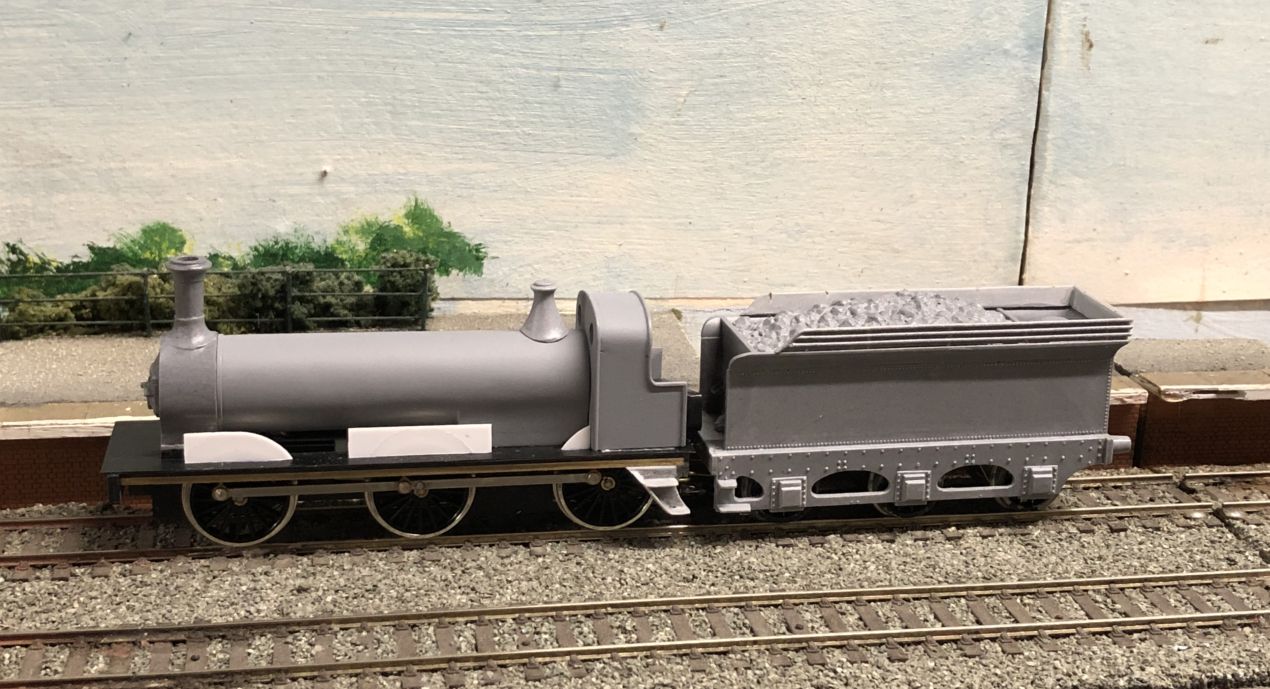 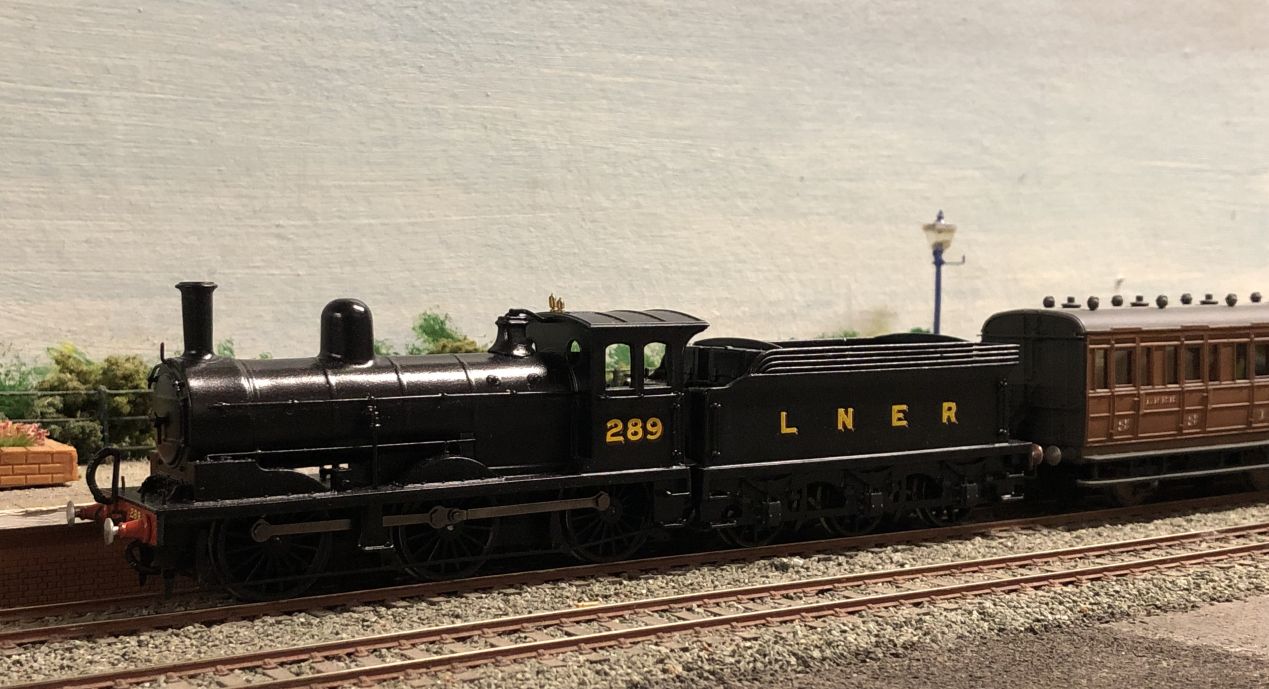 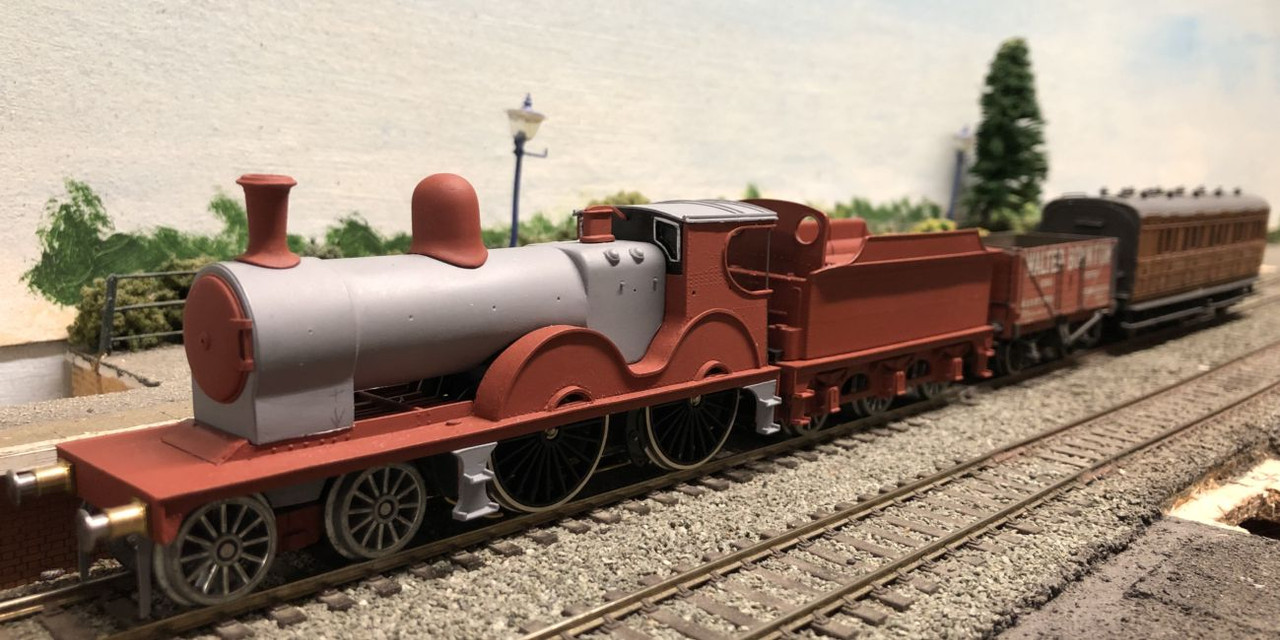 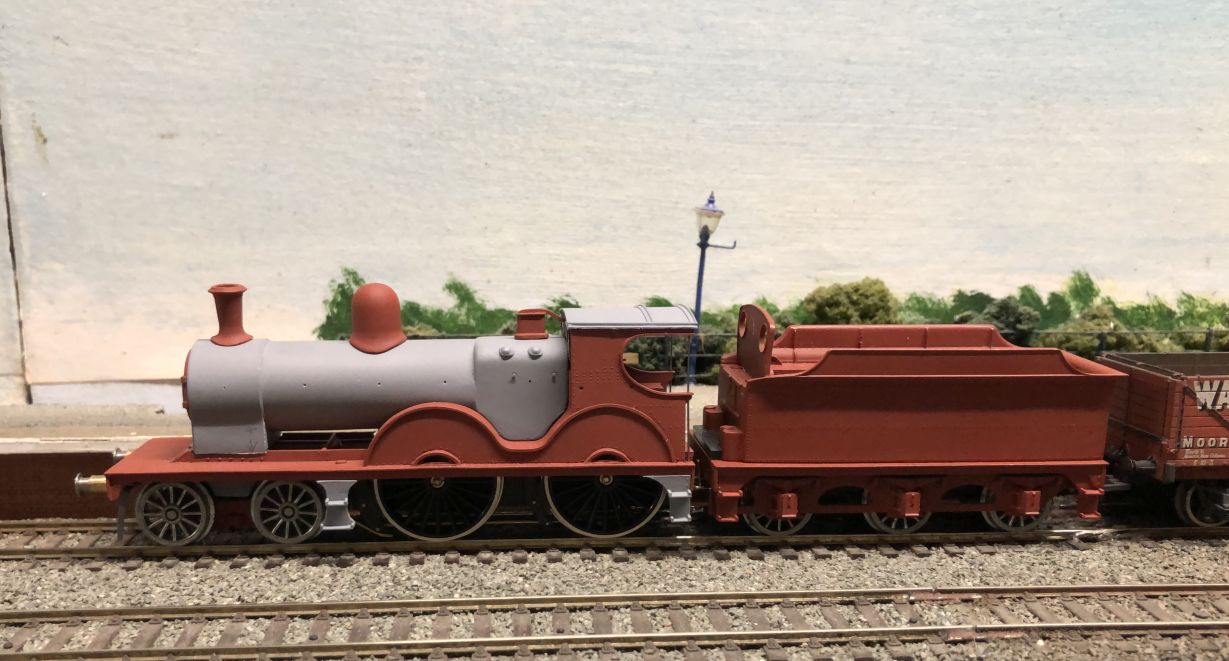 So Sexy, those Pre Grouping engines.

To save those requiring only a brief summary having to wade through details elsewhere, the visiting stock pictured above was:

The clearly unfinished Stirling 174 and the 4-4-0 are more purist-upsetting pieces of plastic loco construction stuffed with lead. The 174 has a healthy dose of modified Kitmaster parts thrown in too, and will certainly be a one-off. The 4-4-0, still currently held together by double-sided tape and gravity is in separable chunks to ultimately permit copying as resin castings, not including the idiosyncratic four-coupled driving portion of the chassis which I'm sure won't suit everybody. The other quirk with these locos is that they are supposed to finish up so that either one is able to take an additional home-brewed tender drive mechanism currently under the 4-4-0s tender, the gear ratios and electrical connections being suitably matched all round.

The C, or J21 body and tender tank / bunker are modified / detailed / smoothed 3D prints which were produced (in limited numbers I believe) by a fellow forum contributor, fitted as per the designer's intention to modified chassis units from Bachmann SECR C class.

Also sneaking in to the views are a GNR ballast brake built last winter from a vintage D&S kit, and some of Bill Bedford's "Mousa Models" 3D printed GNR six wheeled carriages. The latter came with one of the better 3D printed surface finishes that I've seen, but still benefitted in my view from some careful fine scraping to remove subtle ridges before "teaking".
Most subjects, models and techniques covered in this thread are now listed in various categories on page1

Well after the excitement of all those glamorous visitors, back to the drudgery of preparing exhibition stock, something I haven't had to do for over 18 months. I always leave this until just before a show, so if I have rectified any faults and they reappear, they're fresh in my mind. I have a notebook where required work is recorded, so there are the notes from Southampton in January 2020 and the running weekend last weekend to work through. 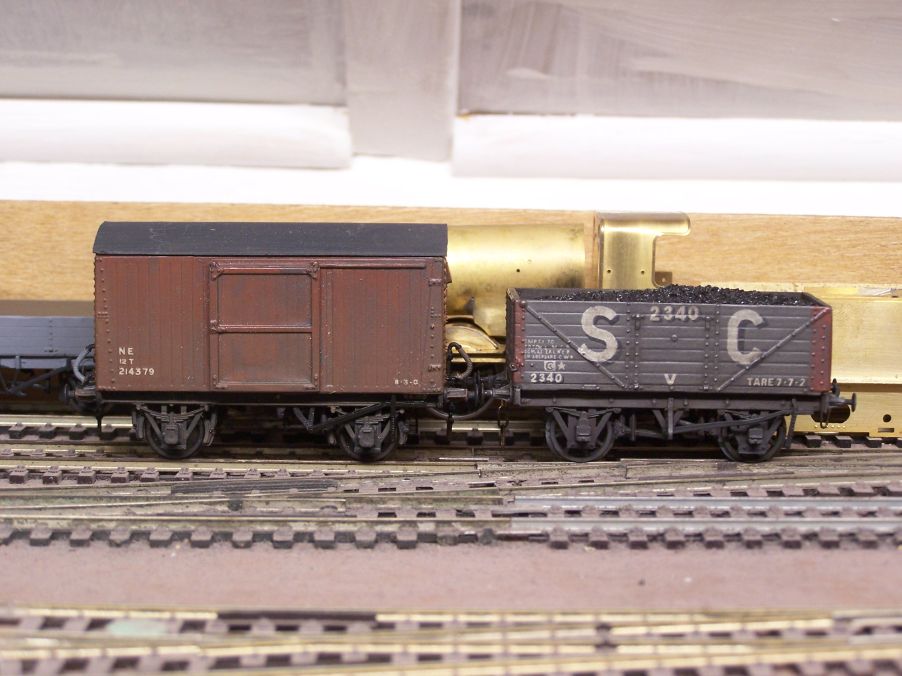 No matter how carefully you examine the stock, there's always one which turns up at a show with no couplings. Here there were two; on the van I'd clearly forgotten to fit them while the mineral had lost one end due to there being an open slot in the buffer beam. I use the spring and split pin to secure Smiths couplings - not because I have any hope that they spring, but it's easy and non-destructive if I want to change them - and it had pinged out of the bottom of the buffer beam. I've now glued a hook in place. 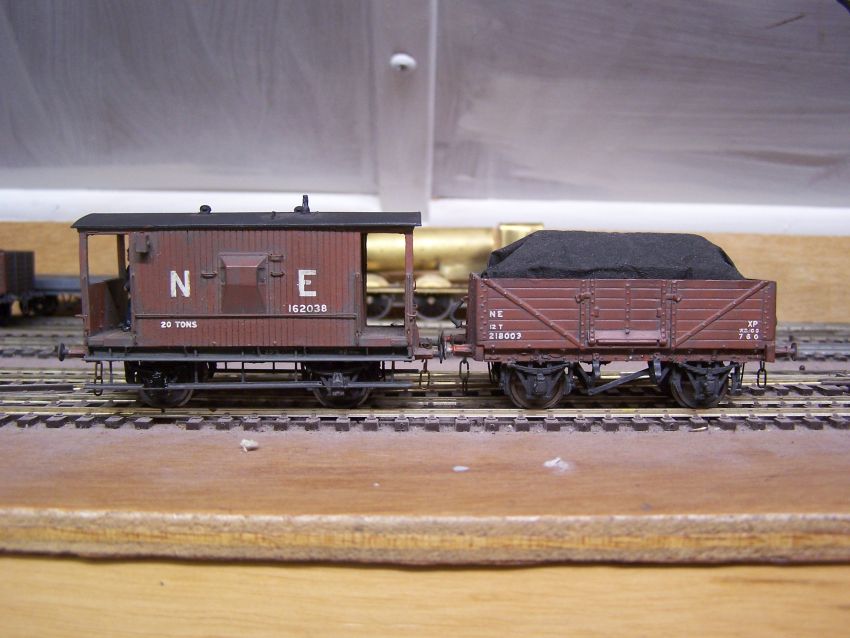 We're not taking all the usual stock to Leeds and so an extra BV is needed for the perishables train. I don't have an LNER liveried Toad D spare, so the guard will have to slum it in a Toad E and be glad of it. This one was in the box with a missing axlebox, so a replacement has been added and painted. The fitted high is from the Scotch Goods, having had some brake rigging added at some time which hadn't been painted. 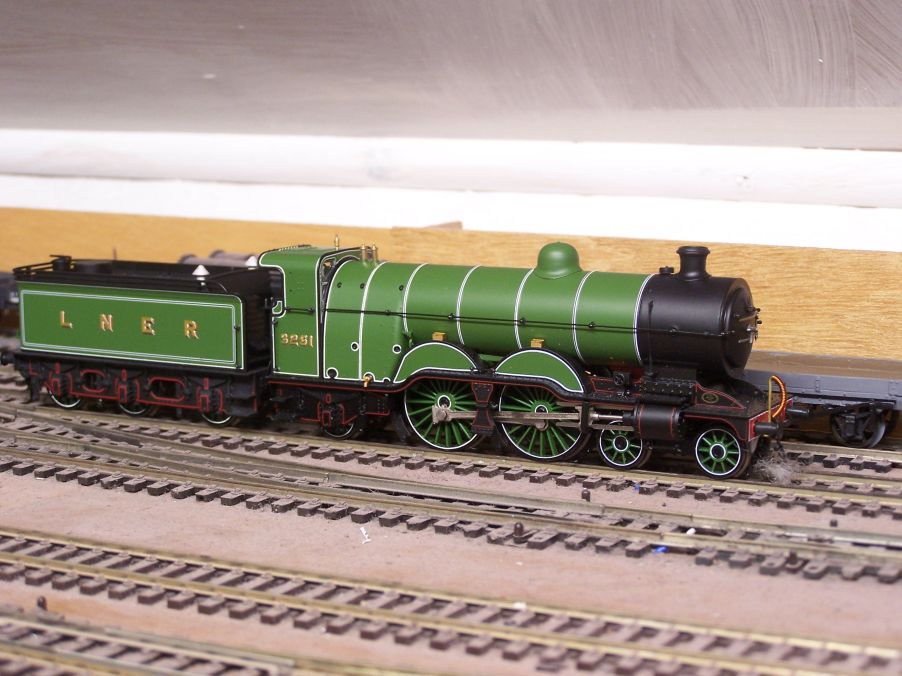 Also standing in at Leeds, this NRM C1. I acquired this cheaply as the packaging was damaged and there was no accessory pack. I've added front coupling, vac upstand and tender mushroom vents. It's since had the handrails painted green as well. 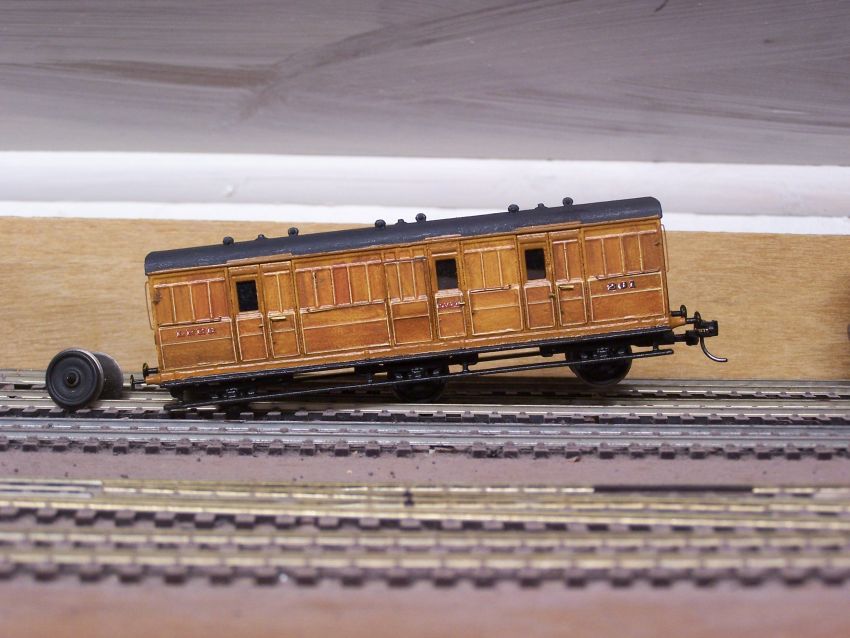 The XBV ran fine at the weekend, but it became apparent that it might be most useful as a Kadee to TL converter. That means some extra floor needs adding to support the TL holder, which is what's happening here. 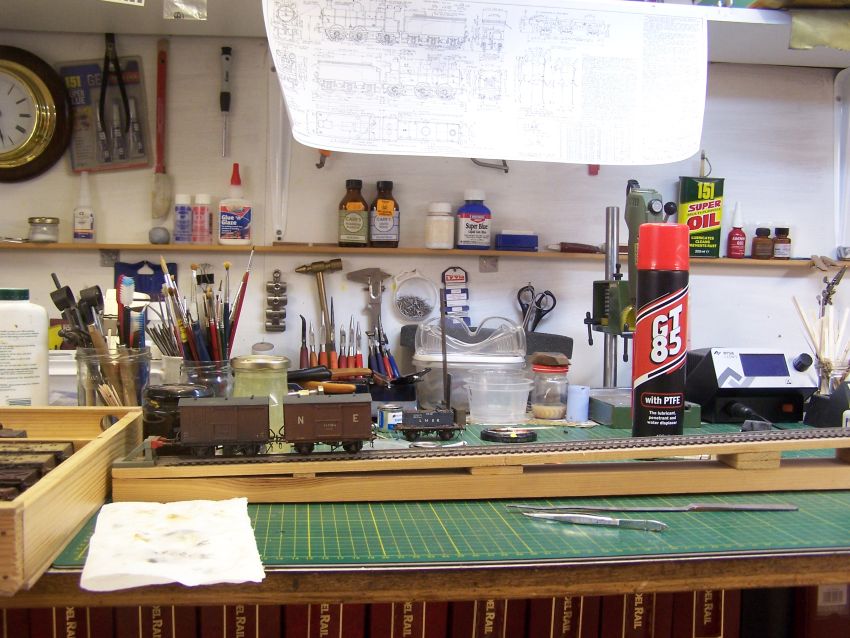 Most of the time has been spent checking stock for free running and oiling the more statically inclined. The perishables train especially was draggy at the weekend and all the stock has lain largely idle for a year and a half. I think this has been seen before - it's a metre of track raised 1 inch at one end. Vehicles should run down it with the minimum of encouragement, or ideally none at all. It's a good opportunity to check for other defects - missing buffers, loose roofs - and also showed up the need to have a serious wheel cleaning session. Clean wheels make a surprising difference to free rolling.
Top

Back to the workbench after a short break. Suitably equipped with mandrels, I attacked the J5. Now we have clearance on all wheels, I put the coupling rods together. Other than cleaning up the holes, I've done no fettling and it runs freely at once. Maybe I should buy a lottery ticket. 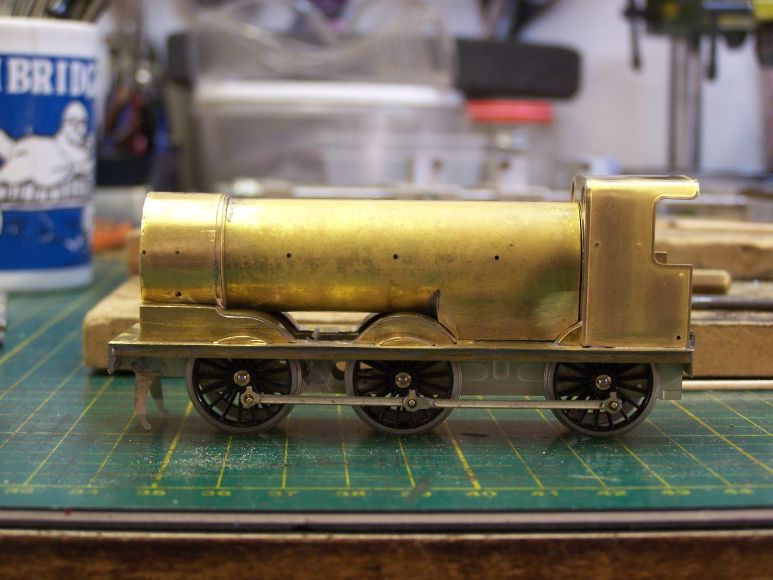 Before that I just fancied a wagon. I was given a bag of kits at the last Grantham running weekend by Steve Pearce, who joined the team for Leeds show. One of the items within was a McGowan GN brake van, so that seemed an appropriate item to start with. It shows its age as a kit, but with a bit of detail and some modern replacement parts (W irons) it can pass muster. 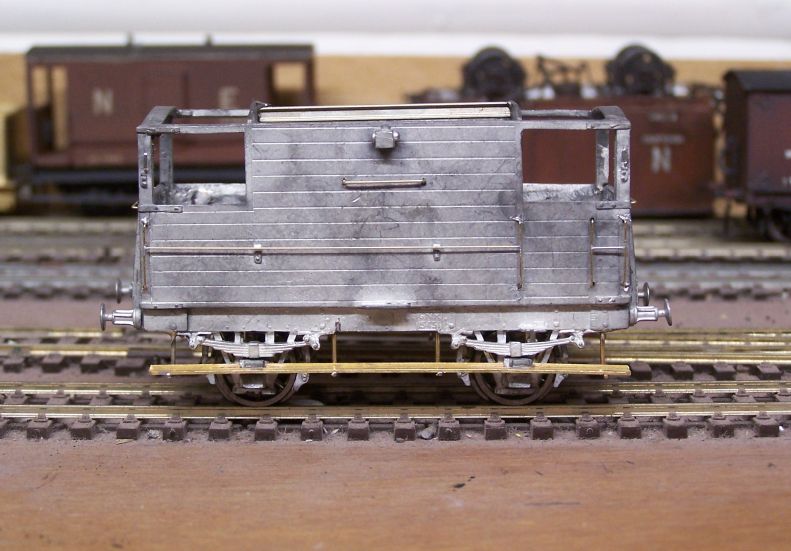 For the benefit of anyone else building this kit, this is the drivetrain I've chosen. 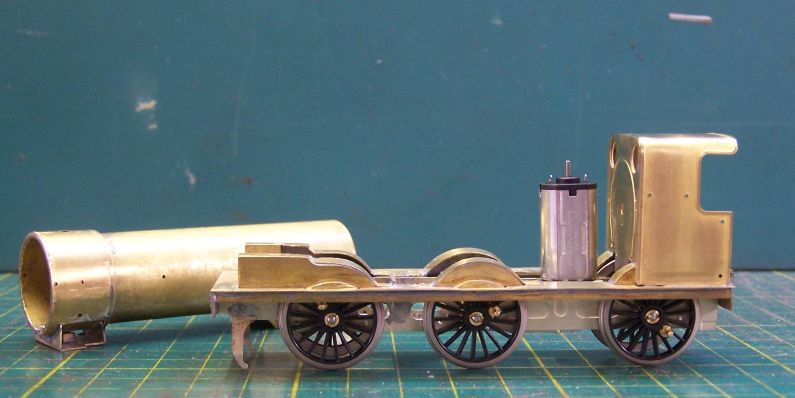 It's a High Level Road Runner Plus with the smaller of the two coreless motors Chris offers attached. Despite apparent appearance in the above picture it goes into the firebox vertically. Here it is with its clothes back on. 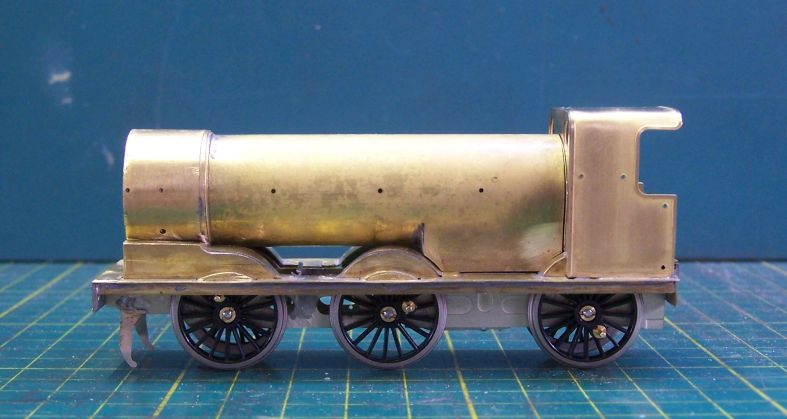 jwealleans wrote: ↑Wed Oct 27, 2021 9:43 pm Other than cleaning up the holes, I've done no fettling and it runs freely at once. Maybe I should buy a lottery ticket


Always a bonus when that happens. Now you should try one In plastic....just for fun

Maybe when i run out of metal ones. Don't hold your breath.
Top

I have a McGowan GN brake van nearing the top of my kit pile. I would have started it before but there is 1 axlebox missing! Plse, what W irons and axleboxes have you used on yours?
Top

MJT W irons, which are a very snug fit in the body so I didn't even have to pack them up off the plastikard floor, just soldered them to the back of the kit ones. Axleboxes are those supplied, again just soldered in over the bearing ends.

If I had one missing I'd just use an LNER one instead - it's what the real railway would have done.
Top
Post Reply
2603 posts