Thanks Jonathan, I had it in my diary already, looking forward to seeing Rob and Chris after a long break due to no shows.
Top

I still recall the "irony" of finding that nice easy Southern Pride etched sides were available for that 5 car steel panelled set just after I'd completed the marathon of modifications, improvements and substitutions to make something reasonably convincing and reliable from the Phoenix SRG (former BSL) aluminium approximations.

Look forward to seeing you if you make it Graeme.

Well, I'm spoiling you. Two updates in less than a week. This one has a bit of a story to it. As some of you may have gathered if you read this thread regularly, a few of us convene over Skype from time to time to chat with Jesse's mum and look at photographs. On this occasion the subject was a B15 with an up working north of Newcastle in the later 1920s. We'd covered the obvious stuff and it was Jesse himself who asked what the third vehicle behind the tender was.

Clearly a Doncaster design of the Howlden era; I thought it might be an M&GN luggage brake, but Steve White pinned it down as a Hound Van to GN D339. He also mentioned that Crispy Dave (Dave S in this parish) might have done some etches....

Well, he had. They were forthcoming and with the addition of some scratchbuilt bits and Mike Trice's 3D printed components for GN 6 wheelers, it is now waiting for me to get my finger out and prepare lettering so it can be finished off. 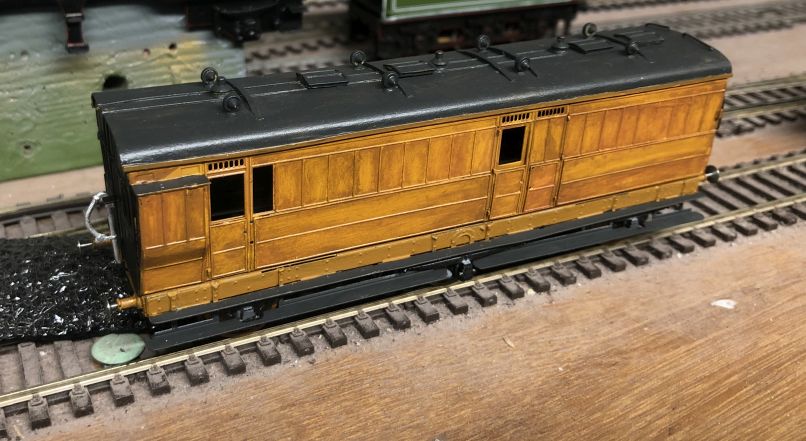 Another characterful vehicle which might well be seen hanging around on Grantham once it's in a fully presentable state.

The very sharp eyed might note more vents in the initial photograph - there are annotations all over the diagram book about various amendments to individual vans, so I've gone with the roof furniture as shown in the clearest photo I have. That van is also in goods livery with the original sliding door. They were teak when built and are illustrated as such in Nick Campling's book, so I've gone with that for my example. The LNER replaced the sliding doors with a hinged pair. Dave's covered both options in the etch.
Top
Post Reply
2615 posts