I think you are correct Jonathan. Certainly the NER sold some out of service.
I beleive that the NER/LNER had a few until the 30's for excursion traffic etc but not for timetabled services, off hand I don't know how many and by what date they had all gone. Someware I have it, but where ?.
Top

So, on the subject of rigid-bodied coaches, has anyone heard anything about the Genesis coaches? Things have been radio silent at Hattons for a while.
Top

Welp, now we know what's the deal with the Genesis coaches; I got an e-mail this morning about them, and apparently they've pushed the delivery dates back to the end of March, at the earliest.

The GWR and SECR coaches will arrive in shop 28th March; LBSCR, GNR and LNWR on June 6th; and the LMS, LNER, SR and Departmental stock will be on July 11th.
Top

Something of a relief for me: much to pay for between now and then.

I think I may yet cancel my order, though. The more I have played around with the Hornby coaches, the less convinced I am that the Hattons one are so superior that they are worth bothering with.

In fact it's convincing me that modelling - by way of kit building - really is the best way to go for GNR after all. My mods to the Hornby coaches make a nicer detailed coach, but it's still not GNR enough and I am finding myself changing my mind on that.
Top

Good thinking Simon. I've had that view all along after seeing what was proposed by both companies. But I suppose if one can't build kits there aren't any other options and of course kits are not cheap if one needs to buy them now. Fortunately I've had quite a number of GN Howlden kits in stock for many years. Have now got 11 running on my layout with many more to build when modelling priorities allow.
Andrew
Top

Simple kits would certainly be the ideal answer, but for limited-market items the currently available technology does not seem suited to delivering a completely suitable and inexpensive product. Injection moulded plastic kits, surely the simplest option for the less skilled, for those less pedantic about some of the details and for those who are short of time, are prohibitively expensive to produce in very small numbers. Etched brass kit construction usually means lots of separate pieces, demands soldering skills and accurate assembly, takes plenty of time unless you're very slick, and tends not to be cheap either. The very best I've seen of 3D printing so far doesn't seem to me to be quite good enough to produce carriage bodies that are sufficiently free of ridges to be truly ready for paint without extra preparation, so even Bill Bedford's one-piece GNR carriage bodies are not the perfect answer, good as they are - again, at a price.
A half-way house, for those whose eyes mainly see details above solebar level, might be some sets of cast resin sides, ends and roofs for a small selection of GN-style carriage types designed to fit the new RTR underframes, but I'm not offering to do the production. My time is promised for other things. I suspect that the biggest production challenge would be the lawful creation of sufficiently good master sides, a job requiring skill and ingenuity. Creation of the moulds and production of the castings would be somewhat easier. But how many modellers would be satisfied with something not strictly of the correct length sitting on a not-cheaply-acquired underframe not of the the correct style?
Most subjects, models and techniques covered in this thread are now listed in various categories on page1

I think there's another solution - which we saw in the Hachette Mk1 partwork - a new tooling, made cheaply, down a to price. The Hachette Mk1, which was not a perfect rendition of a Mk1 coach, but made cheaply as one small item in the overall partwork, was an all new tooling.

Assuming you could get the sufficient numbers of backers, some simplified, made down to a price (but designed for modifications by modellers if they so wished) set of GNR coaches would be entirely possible, and moreover, as Hornby have led the way with their theirs, easily made to ready to run with a simple chassis setup.

What GNR coaches though? There's your issue! There are so many different diagrams and styles. I think it's fair to say a an all third, a brake third, a first and similar are the formats for a basic range - past that, you need to get the lengths right. Can you make a single chassis for the 6 wheelers fit a multitude of body types without compromise? Which is what Hornby have effectively done with the Stroudleys, which hasn't gone down well.

It's a difficult one, for sure, for any manufacturer, and particularly where the GNR are concerned. I will be content for the moment with my rake but if a better option becomes available, I will look to swap or build accordingly. 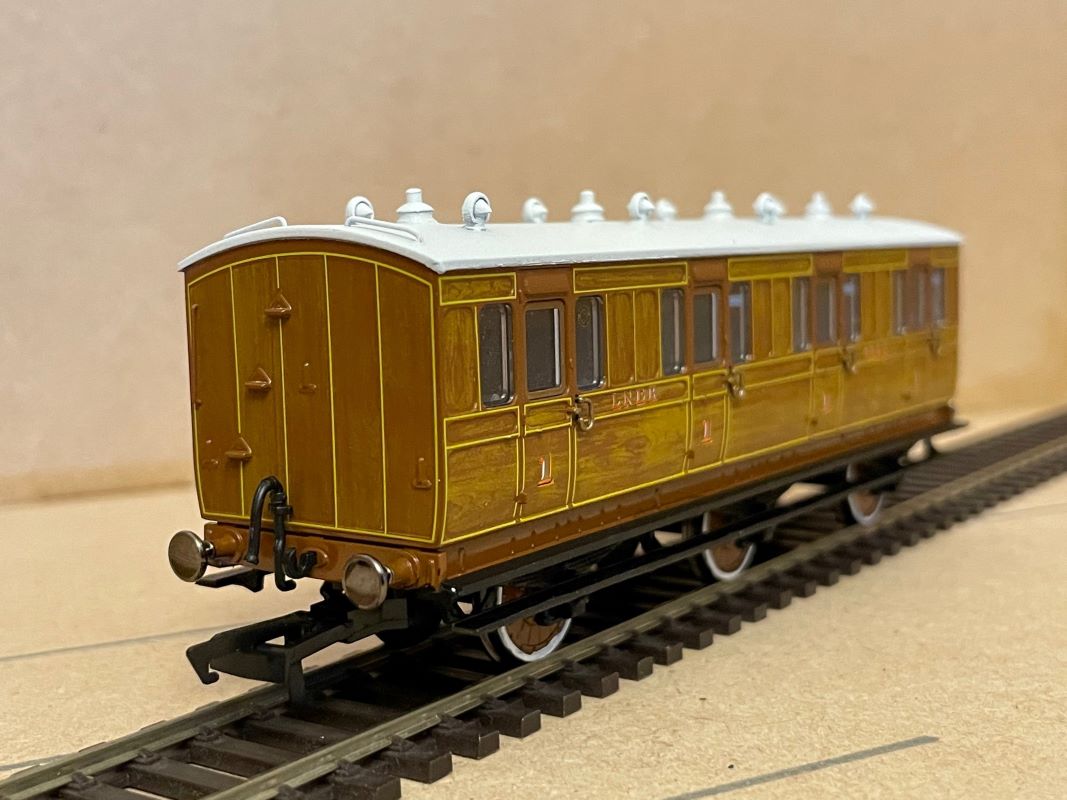 Or even something akin to the plastic Ratio kits. They have those GWR four wheelers - a kit designed similarly to but to GNR design would be make a nice, if niche, kit.

I have been um-ing and ah-ing over keeping my order with Hattons and have decided I will likely cancel my coaches, and look to build kits in future. The Hornby experience has cemented my views - I kit bashed some nice coaches and made them more GNR like but they're still not convincing enough.
Top

I am an Expat living in Canada. I am into GaugeOne and I have a Stirling Single that I want to build a rake of Howlden 6 wheel coaches for. I am looking for suitable drawings for these beautiful teak coaches. Can anyone in the group suggest a source of drawings and information.
Alan Wright
Arthur
Ontario.
Top

SteamerAlan wrote: ↑Wed Jun 29, 2022 5:03 pm I am an Expat living in Canada. I am into GaugeOne and I have a Stirling Single that I want to build a rake of Howlden 6 wheel coaches for. I am looking for suitable drawings for these beautiful teak coaches. Can anyone in the group suggest a source of drawings and information.
Alan Wright
Arthur
Ontario.

john coffin wrote: ↑Tue Apr 13, 2021 5:54 pm I'm with Dave,
GNR carriages have a distinctive roof pattern and more importantly the lower beading.
These things have no greater connection to the GNR than the fact that if as has been
said they are based on a Stoudley design, he at least once worked for the GNR.
The roof profile is a complete joke, and not even the early 4 wheelers of the GNr
have that profile.
THEY ARE JUST WRONG.

Hi Paul and all,
GNR carriages were produced prior to and later than the Howlden era with its very distinctive roof line.
I don't know when the Howlden series were built, but a Doncaster drawing of a GNR passenger break designed in 1872 featured a pure elliptical roof curve.*
Perhaps for modellers of an early era, the Hornby and Hattons pre-group GNR models may be fine if there is further proof of such GNR coaching stock.

Frankly, we all, those who know about GNR carriages, are indeed aware that for the period up until
1873/4 GNR carriages were built with a single curved style roof, as you mention that 3rd brake of 1872 is
well known.
However what we now call the Howlden style was actually introduced by the Carriage designer before,
John Griffith in around 1872/3, we have no published evidence of the reason for change. This style
was carried on when Howlden became Chief Carriage and Wagon designer, until he introduced
Clerestory rooves in the 1890's, which style only became redundant when the so called Gresley roof
was introduced in 1905, and basically lasted until 1941, after which the Thompson roof came into being.

However, since no one yet produces a suitable RTR loco in quantity, it is difficult to see how Hattons
or Hornby carriages might even be considered, except as departmental vehicles.

Not least since they are somewhat longer than the GNR carriages to which you reference.
Unlike the Midland, the GNR did not stick an extra pair of wheels under 4 wheelers which were too long.

Hello Paul,
Thanks for elucidating some of the history of differing GNR coach styles.
That certainly fills in the gaps.
I myself would be quite happy to use the elliptical roof coaches with say an engine built a decade or two later (viz. 1880s).
Of course there are probably still errors in length, wheel spacing, and panel detail.

just to be pedantic again, the early carriages are NOT elliptical, they are single radius curves on GNR.
The only so called elliptical rooves are those of Gresley carriages,
although when you draw them the Griffiths/Howlden rooves are a kind of ellipse, but not defined as such
rather two separate curves.