To use a well-worn but fully apt phrase: She's a stunner. Thank you for sharing your talent, greenglade.

The only other model of similar size I've seen was that of the GWR King that was in a display case on the concourse at Paddington, and that was many, many years ago. I don't know what gauge it was, what happened to it, or whether it's still there (probably not).
Top

The tender swap is an intriguing one. I completely agree from the aesthetics point of view. It is, strangely enough, I think, the only tender type fitted to the A3s that Scotsman never had. GNR coal rail tender, beaded corridor tender, streamlined A4 type tender, then back to beaded corridor tender in preservation.

That does not in any way detract from the brilliance of the piece, IMO. It's actually a nice talking point as a what if.


Thanks' for the kind words sir... yes the tender choice was a difficult one... I wanted it to match the Cab with curved sheets and the beading and yet fit my time frame of the late 30's I also wanted to include all of the fine detail and still be able to steam the thing....i did spend some time searching for any records as to whether 4472 had such a tender out on loan while her's was in for overhaul but to the best of my knowledge today, no such records were kept or weren't seen important enough to keep.. So I have chosen the high sided tender but keeping the original number for the streamlined tender used since '38'. here's a couple pictures to explain my reasoning....

I do not have a removable front section as it would make the fine detail at the front impossible to implement fully, it would also show the panel line of where it splits which to my eye would distract from the detail on the tender front section.. I can't seem to embed this particular image but hopefully the link will work.

next picture is from the inside, still some work to do here but what i wanted to point out is the two vents, these are as fitted today and are similar to those used for when the higher front wall and fairing was fitted as 4472's proper streamlined tender had. 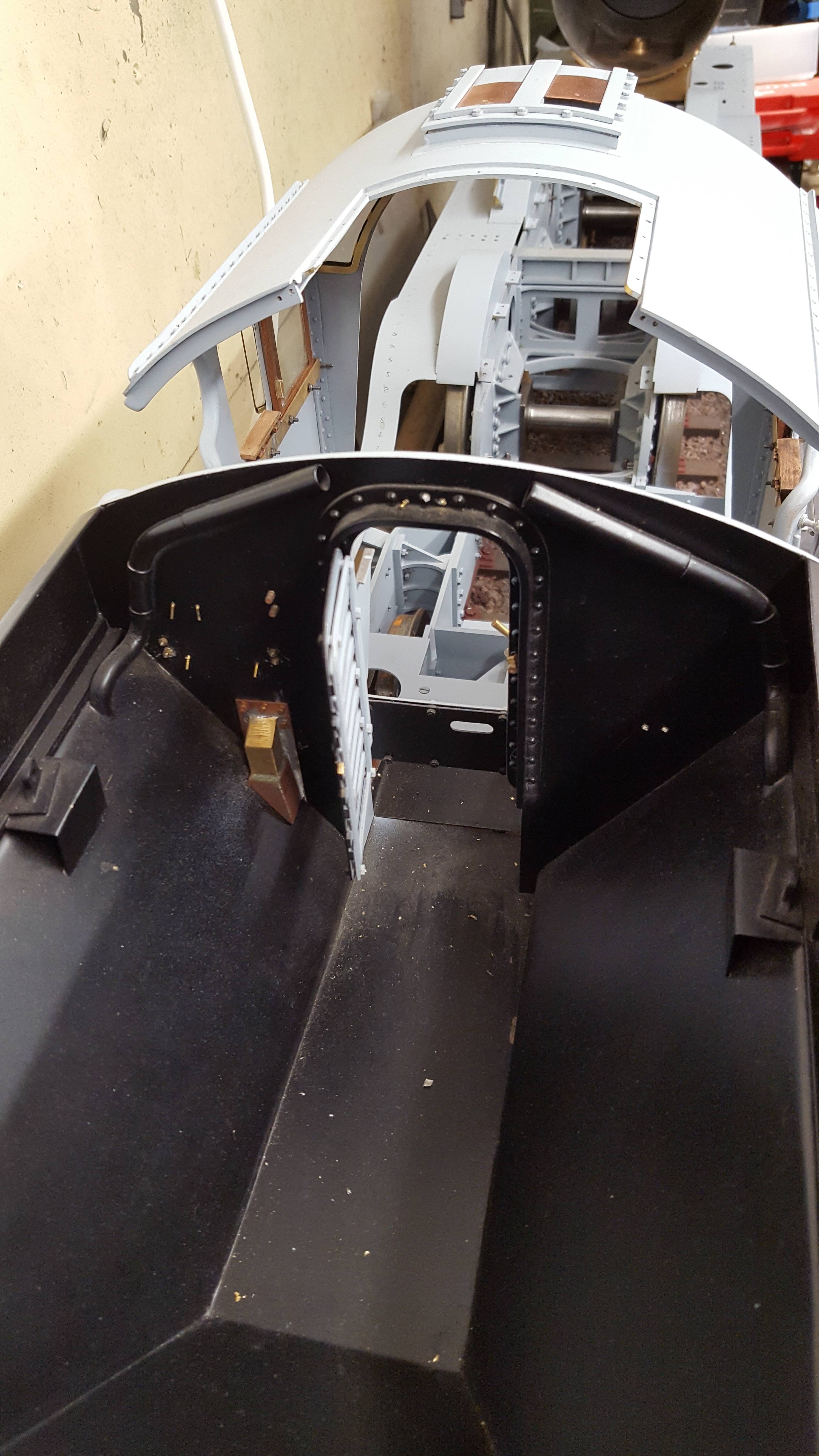 And here's the main reason for the lower vents and why, other than looks I couldn't use the streamlined tender and still be able to keep the model following the prototype without big hole in tender front and cab roof. As I have it I can still operate the model and keep it scale but there's not much room to play around with. I will be able to get my hand/arm to the controls thanks to the lower front coal wall and the cab service hatch fitted for this period, IIRC the early cab had a much smaller rear hatch, this one is to scale and works nicely. 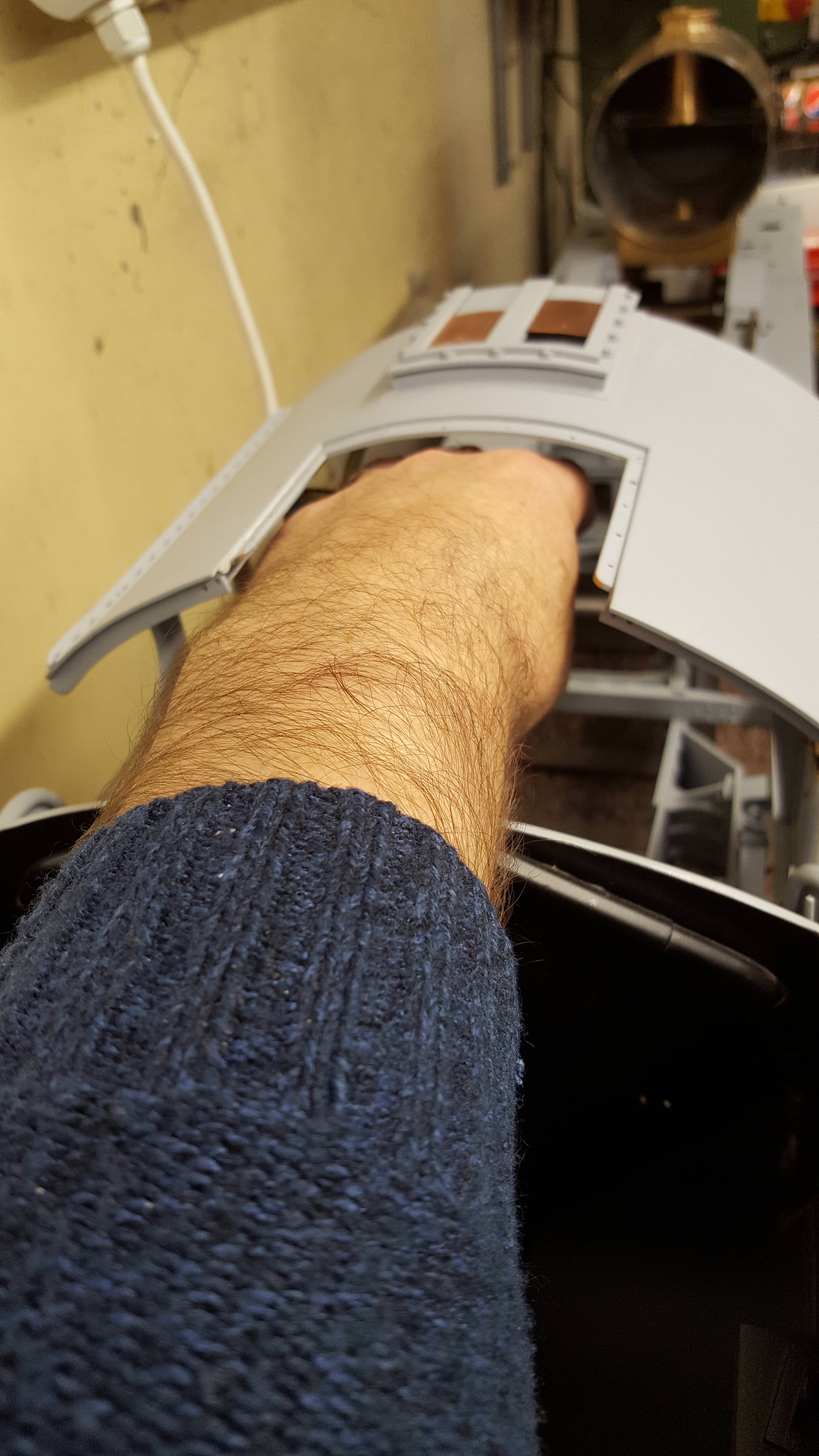 The ventilator housing is also a push on fit so there should be enough light for me to see the steam manifold properly for operating the various valves, valves i might add which will all be fully working as per prototype.. I anticipate at least 2 years work on building all of the valves, gauges, injectors etc....should keep me out of trouble...and the pub...

The only other model of similar size I've seen was that of the GWR King that was in a display case on the concourse at Paddington, and that was many, many years ago. I don't know what gauge it was, what happened to it, or whether it's still there (probably not).

Thanks' giner, much appreciated sir..

It's been some months since I last posted...I've done a fair bit more but probably not a lot different to the eye...main work has been on the middle cylinder. However I am now trying to get her ready for an event in 6 weeks which means getting her to look as good as possible. for this reason I have stripped her down and begun painting...I thought that I would share a picture of her frames totally stripped and painted...Once hardened I'll begin rebuilding her and share the progress here. The unpainted section is where the middle cylinder sits...distances are critical and paint can be thick at times..... 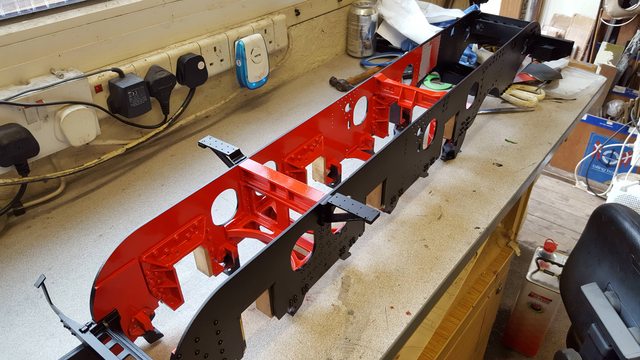 things are slowly going back together..the axle end black/white lining will be done in a month or two time when paint is fully cured..... 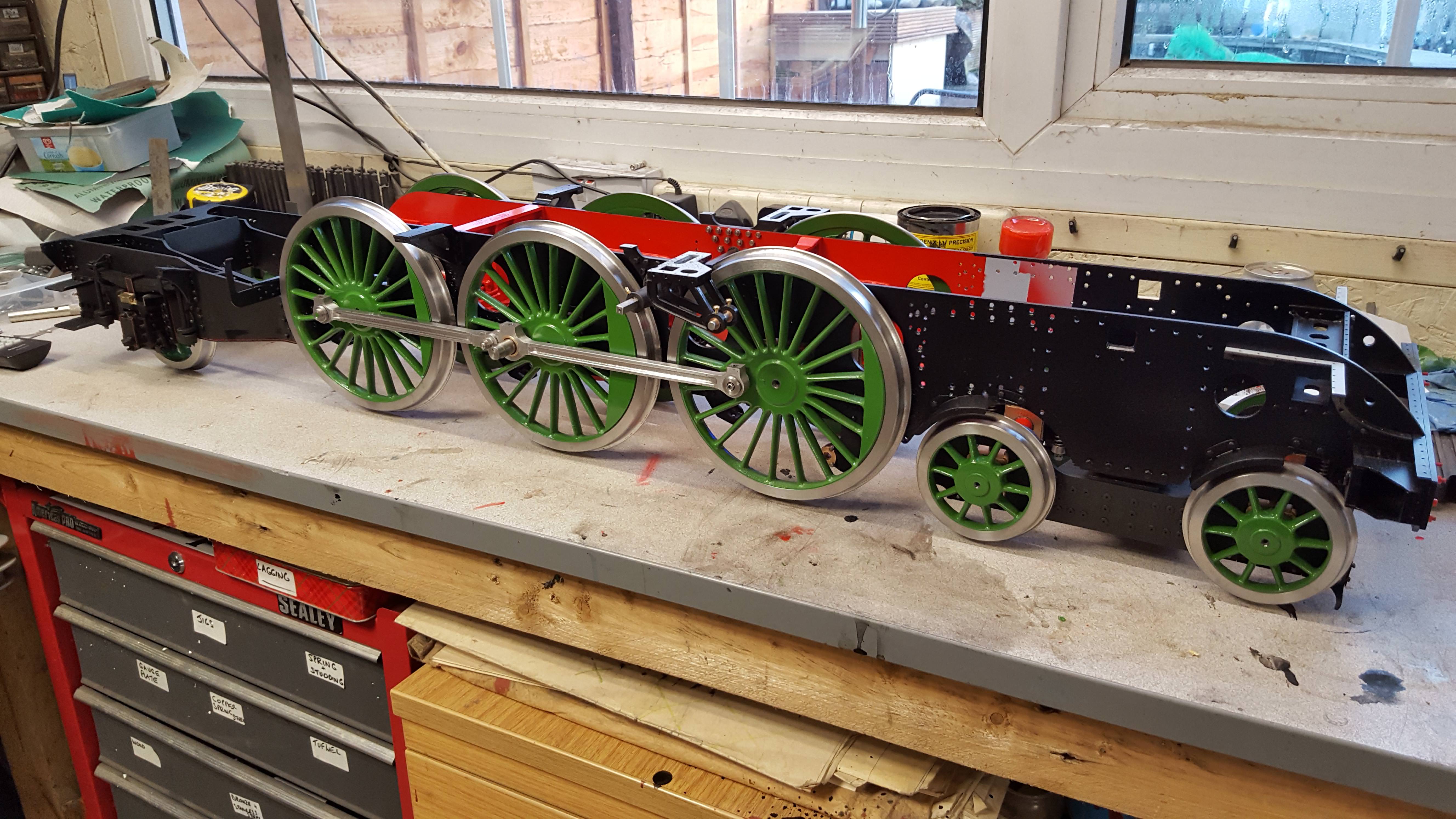 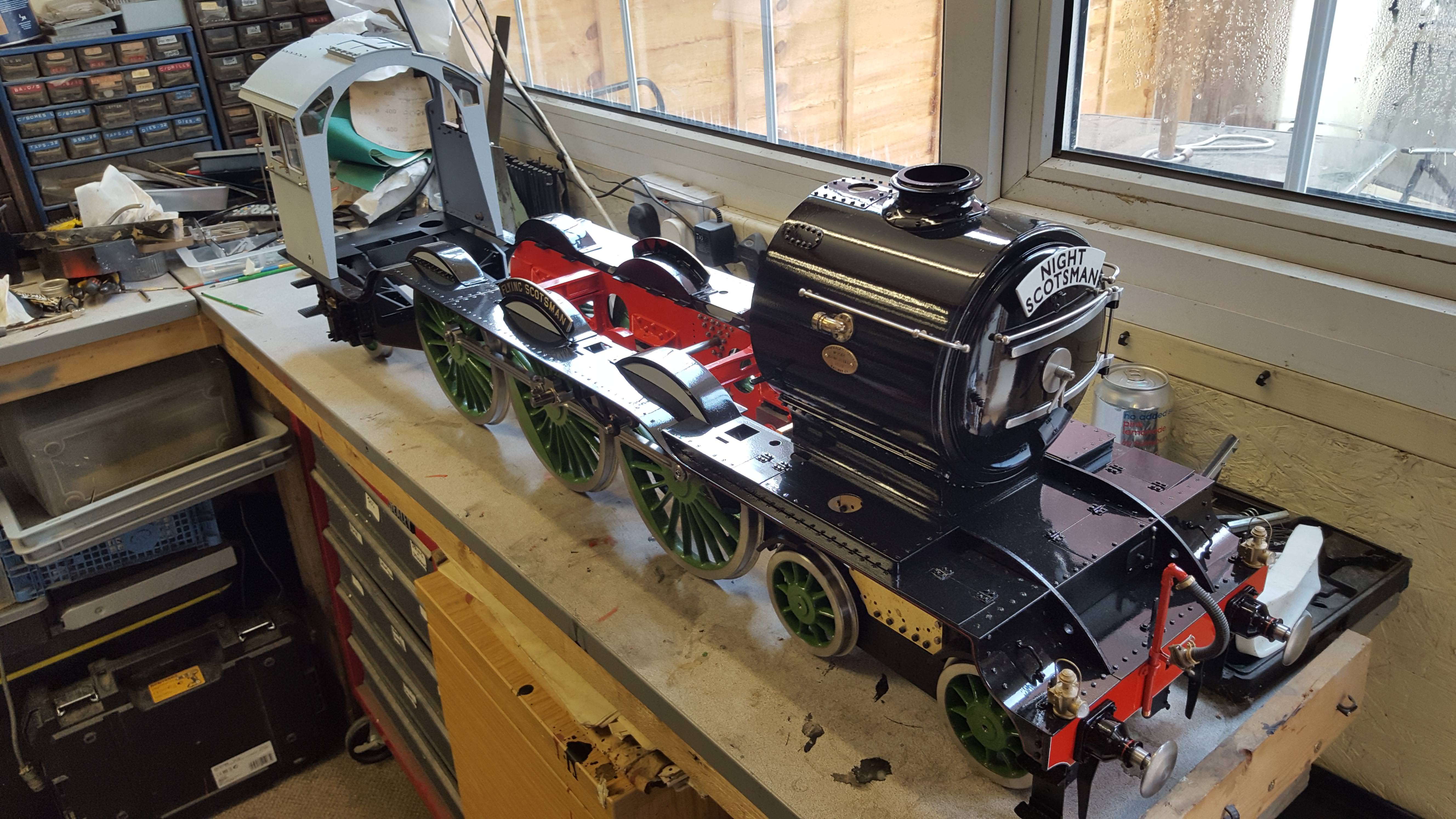 Very nicely by the look of that too.

Rain on windows? We've not had a drop for weeks.....
Most subjects, models and techniques covered in this thread are now listed in various categories on page1

ahh...the window was second hand and very cheap off ebay...far better than the small wooden window that it replaced but the seal is blown letting condensation in...I can live with it...

very nice Peter, are you brush or spray painting, which ever I commend your skills with paint.

As for the rain, we had about 2.5 hours last night in my part of West London! Now you cannot tell it fell>

Making good progress will be keen to see her in motion.

Thank's Paul, yes we had that rain too, I'm in Harrow... I spray paint as much as possible...regarding the current paint, I'm happy with the frames and associated lining, I'm not happy with the black upper works, so smokebox, running boards etc, I will repaint these at some point in the future, I still have many years of build so no rush. I'm forced to go with what I have for now as the loco has been invited to an LNER man's memorial event on 1st August and I just don't have time to redo it now, to be honest, I wasn't expecting a good finish due to the hot weather, enamel doesn't like being applied when it's too hot.

Evening all.....today was the Bob Todd memorial at the North London Society of Model Engineers club track...this is my 3rd consecutive year of being invited to this special day. This day is my barometer to see how far I've progressed over the last 12 months. I try to take a picture in the same place to help with this...this is this year's effort... 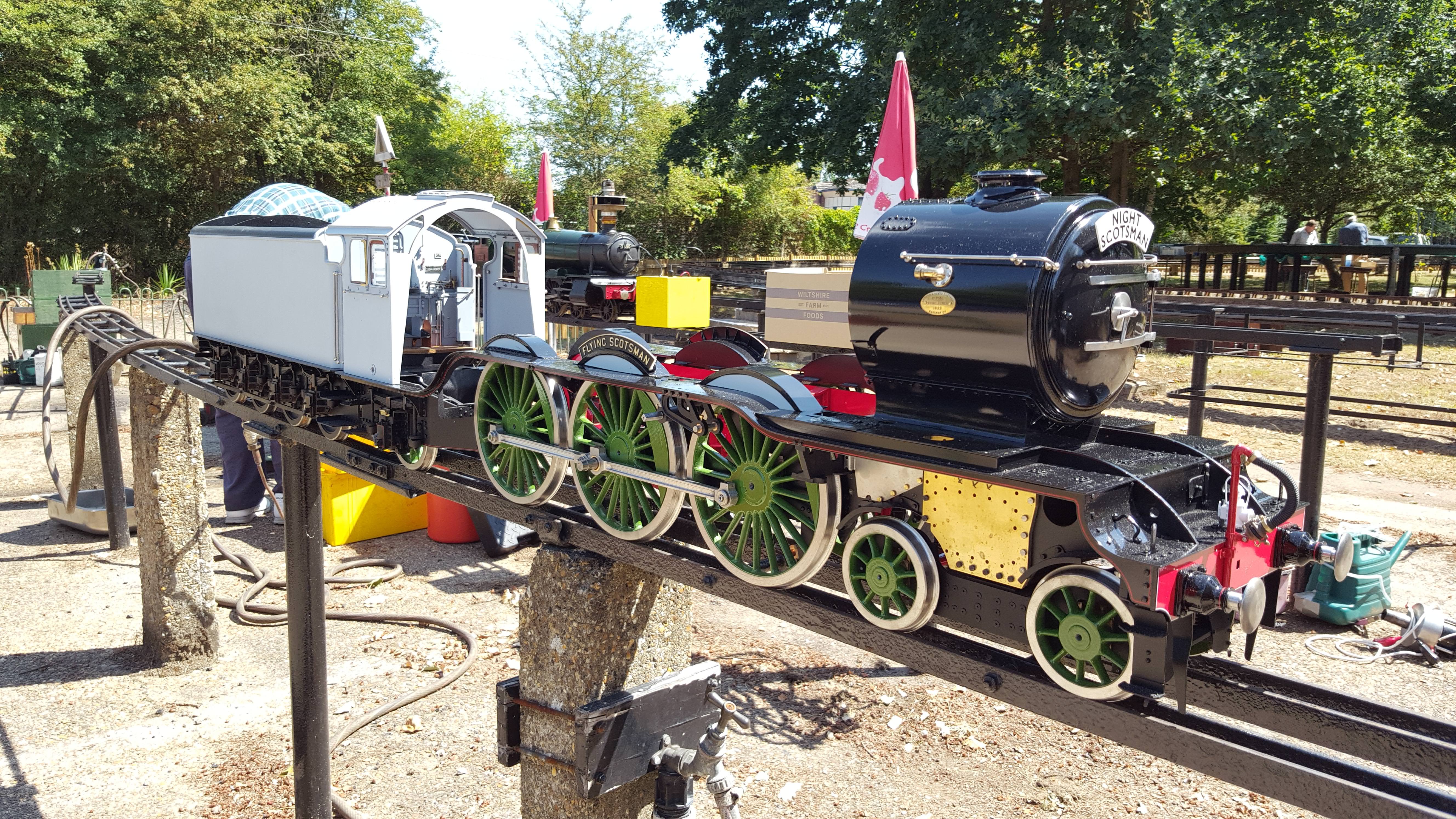 I like hearing stories from those of old, today I learnt that Bob at a very young age (IIRC 16) had been part of the 1938 Sterling single Flying Scotsman train when the new FS train was launched....what I time to have lived...

It's been a while since I last posted any pictures of 4472, she's coming along nicely and a lot has been done. I have decided to pay for a professional boiler by perhaps the best builder in the country, hopefully, that may be ready later this year, it will be modified from the drawing a little to give me a near to scale backhead along with other prototypical items. Lot's of small things done such as lining the wheels and making/fitting the return cranks

vacuum cylinders along with their brake shaft have been fitted and tested, all working as they should.

The 3 cylinders have now been worked on, outside mated to their flanges with inside mostly machined and all 3 test mounted to the frames.

This last picture brings us right up to date, all cylinders have now had their bores machined, ports, front covers steam chest bores, the steam inlet for all 3 has now been done.

Lot's still to do but progress is certainly being made...

I don't really feel qualified to pass comment on engineering models, but from a decidedly average model makers point of view, that looks amazing.

Thank's guys, but honestly, it's not rocket science building something like this, I bet many who think they couldn't do it in fact could. Some of the work displayed on RMweb is first rate, I love seeing the updates, especially in 7mm as that's something that I plan to get more involved in once I have finished 4472 and perhaps a Gresley teak or two to go behind her. Like most hobbies involving building something, you just take it one step at a time, my project just happens to have an awful lot of steps...