With the end in sight for the J79 my thoughts have started straying to the next build which is to be an LNER/BR J6 (ex Great Northern Railway) This is to be built from a Gladiator Kit which originated in the George Norton Connoisseurs Choice range (according to the etches). Extras include full inside motion from Laurie Griffin along with a few of his detailing parts. Once it's painted (by Warren Haywood) I will then be weathering it and adding the finishing touches.

We start with what's in the box.

First the brass castings and turnings

The chassis etches are quite substantial nickel silver etches, but the body etches feel much thinner so I suspect that they will require a bit of careful handling until they are soldered into a rigid structure.

Finally the extras, These are all from Laurie Griffin and were my suggestions to the gent that I am building it for to not only enhance it but to replace the vulnerable etched lamp irons.
Regards,
Rob
http://www.railway-models-and-art.co.uk
http://www.flickr.com/photos/robpulham/
Top

Saw the prices on the bags/box, thought 'oo' was dear, but it is a J6

It's and it will be a lot of loco when it's finished.
Regards,
Rob
http://www.railway-models-and-art.co.uk
http://www.flickr.com/photos/robpulham/
Top

the Geo. Norton "Connoisseur Choice" kits became part of London Road Models when George retired. After a number of years John Shelley of FourTrack Models took over the 7mm kits. In turn these went to Gladiator when JS retired to France. Interesting that the FourTrack name still appears on the box.

Especially so since Gladiator have now changed hands too. I gather that David Hill, the new owner has had a bit of a challenge working out what he can and can't do to bring some of the kit's in his range up to date without infringing copyright. Something that won't be obvious to those taking over ranges to keep them going.
Regards,
Rob
http://www.railway-models-and-art.co.uk
http://www.flickr.com/photos/robpulham/
Top

Worth remembering that the J6 was actually designed by the late Malcolm Crawley.

It's always interesting to know the history of a kit - both the good as well as those with a less than great reputation.
Regards,
Rob
http://www.railway-models-and-art.co.uk
http://www.flickr.com/photos/robpulham/
Top

The question of copyright for designs is an interesting one.

The artwork I designed (or rather modified from the 4mm version I designed for LRM) of one LNWR loco for Fourtrack Models is now in the Dragon Models website.

Do I have any rights over its use? John Shelley (Fourtrack) presumably sold the tools or the right to produce the etches from the tools he had made from my artwork. I was paid by John Shelley, but no contract, verbal or written ever existed.

Its the way the model railway small suppliers "economy" operates. At least it maintains the availability of models and kits.

This is a tricky one. If nothing appears in writing, I suspect that one has no come back. None the less, it does not stop some manufacturers from using artwork that is copyrighted for their instructions and box art! I can think of a number who have used my drawings without permission, which would have been readily available in any case.

The main exception to this rule is Danny Pinnock who has used many of my GN drawings and thanked me for the information in his instruction.
Top

The J6 is is officially underway,

I decided to build the tender first to get a feel for things and the plan is to use the tender for the pickups so hornblocks were fitted. The good news for this plan is that there were etched cut outs for fitting them with certainly simplified things.

All the wheels are blackened but I need to stock up on steel 10ba csk screws because I haven't enough to do the drivers.
The horn guides are Finney but I seem to have misplaced the strips for retaining the hornblocks so I used a trick borrowed from Warren Haywood and used surplus 12ba nuts and bolts from Slaters crank pins to create retainers. In fairness I could have probably just soldered strips of scrap etch across the bottom because the Slaters wheels are easy to remove.

At the minute there is a lot of side play. I plan to leave this for the moment because the finished model has to negotiate 5' radius curves. 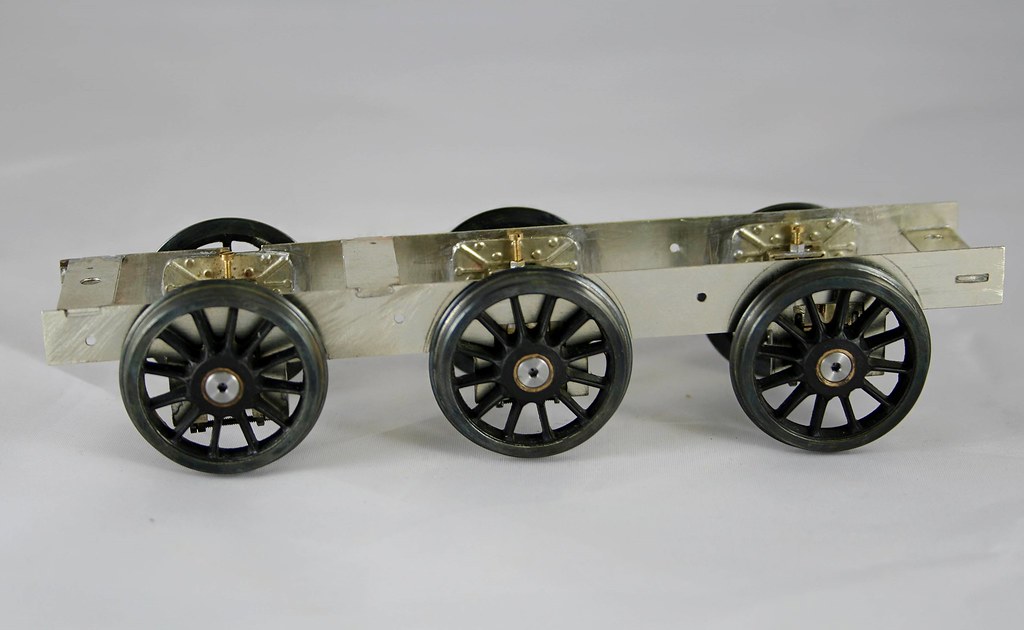 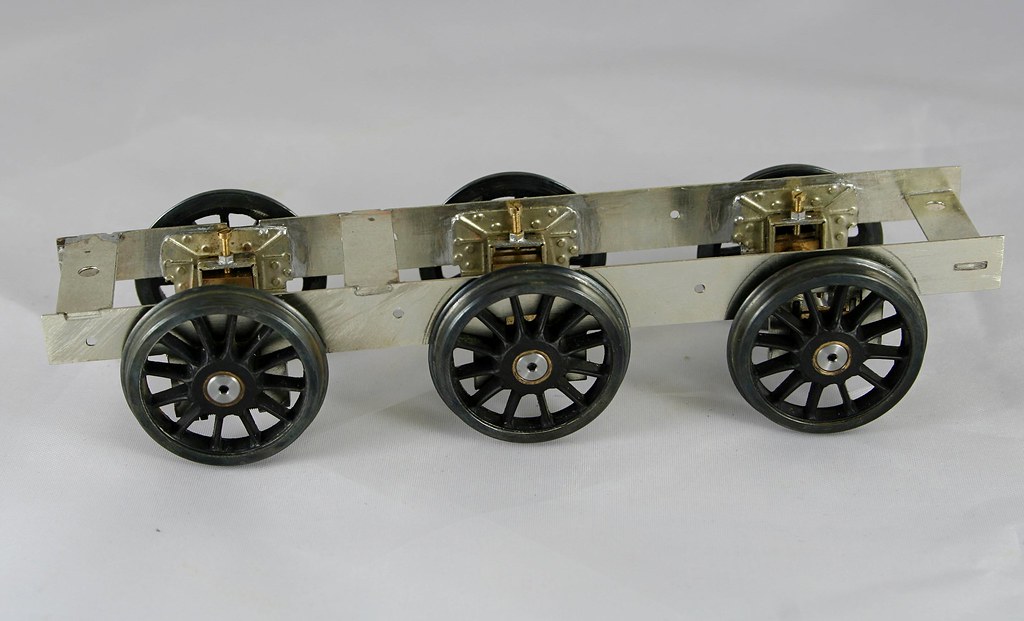 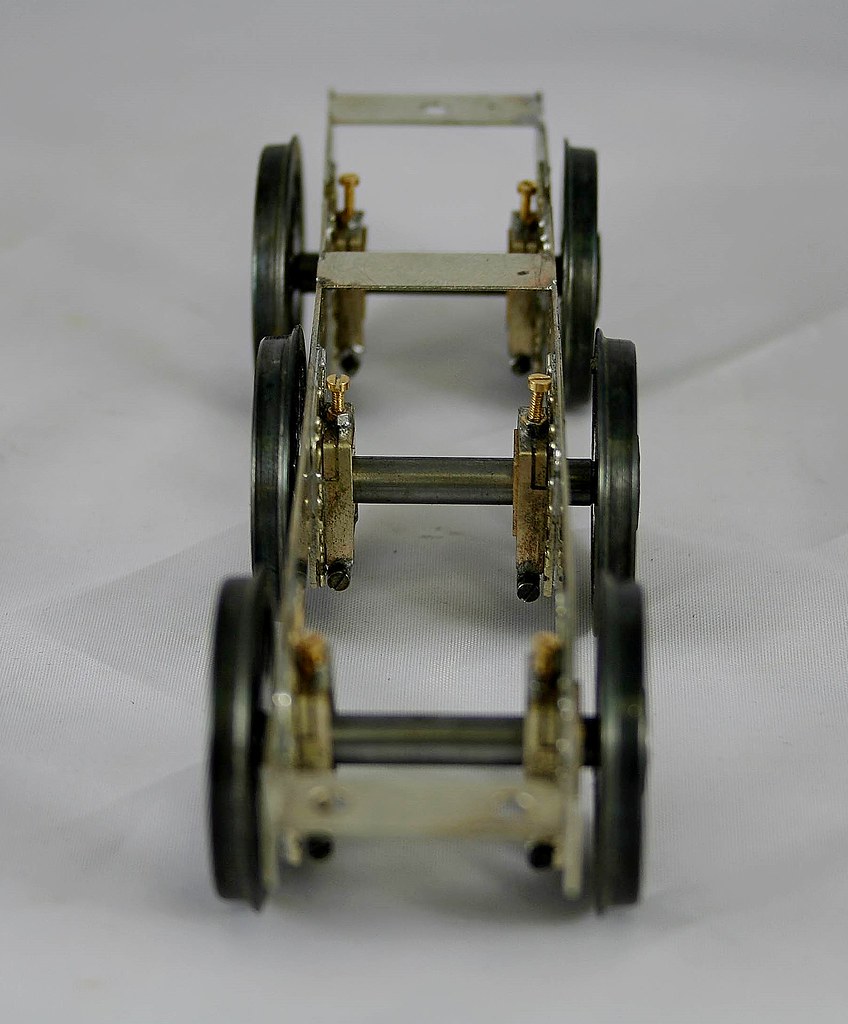 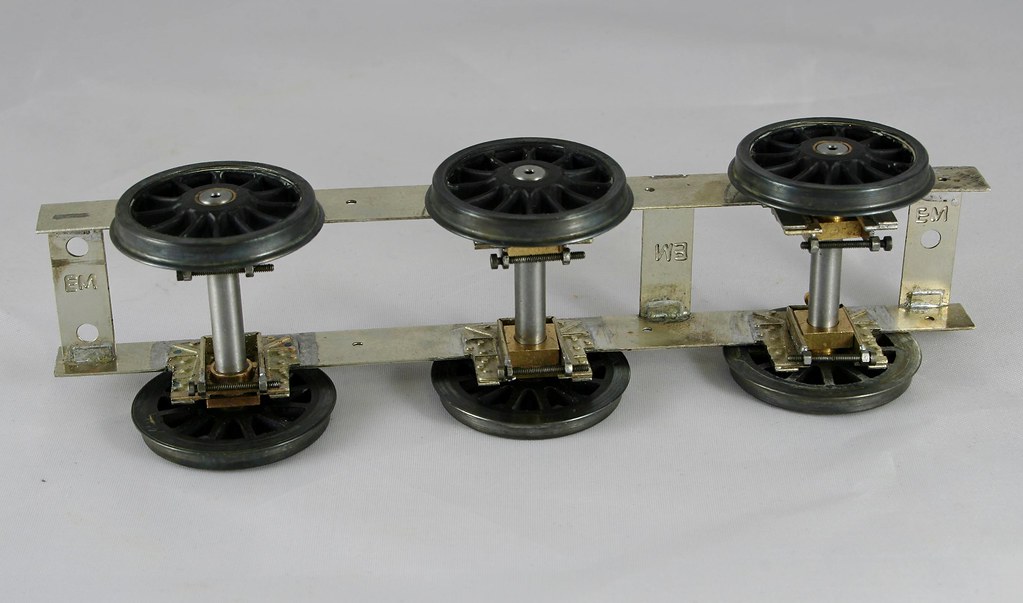 You will note in the last photo that I shimmed the spacers with some scrap etch I am not sure whether I really needed to but it helped to level the space with the top of the frames and to get a tighter fit with the rear spacer that goes through the frames mid way. I suspect that if I had tested it without removing the etching cusp I may not have needed it.
Regards,
Rob
http://www.railway-models-and-art.co.uk
http://www.flickr.com/photos/robpulham/
Top

Although it looks to have been a little quiet on the J6 front things have been progress albeit that it's taken a slight detour.

After careful study of the tender in the photo v's what came with the kit, my client decided that he would prefer a different tender to make the loco match the photo. The alternate tender is now on order from David Hill at Gladiator but won't be available until March. I plan to continue to build the original tender, if for no other reason than to make sure I don't lose any of the bit's off it. - I have made a little more progress which I will share at some point.

Which means that thoughts have turned to the loco itself. I am very gratefully receiving help and guidance from Paul Pen-Sayers (@Locomodels) on building and fitting the inside motion in the chassis and I have been given Carte Blanche by my client to replace items in the same manner as I would if building it for myself.

So far I have elected to obtain some Premier coupling rods and some driving wheel springs from Ragstone. The latter I will need to modify but they will look a bit more like springs than the rather 1D etchings attached to the frames. In fairness to the kit, the etches are labelled 1992 and things have moved on a bit in the detail stakes since then.

This is what I mean by 1D they are a single layer etch with just the outline of the strap that retains the leaves. 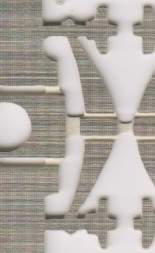 The reason I elected to go for the Premier rods is similar, in that the rods provided are only dual layer with the back layer half etched and they are designed to pivot on the crank pin rather than the knuckle joint. I could perhaps have modified them to pivot on the knuckle but without adding another layer from scratch, I felt that they would still be a bit on the delicate side for coupling rods. Paul of course made a superb job of those for Heather's build and I am guessing that he made up some additions in his workshop.

Moving swiftly on, I have started to clean up the inside motion parts and slipped some of them onto an axle to see how they fit. 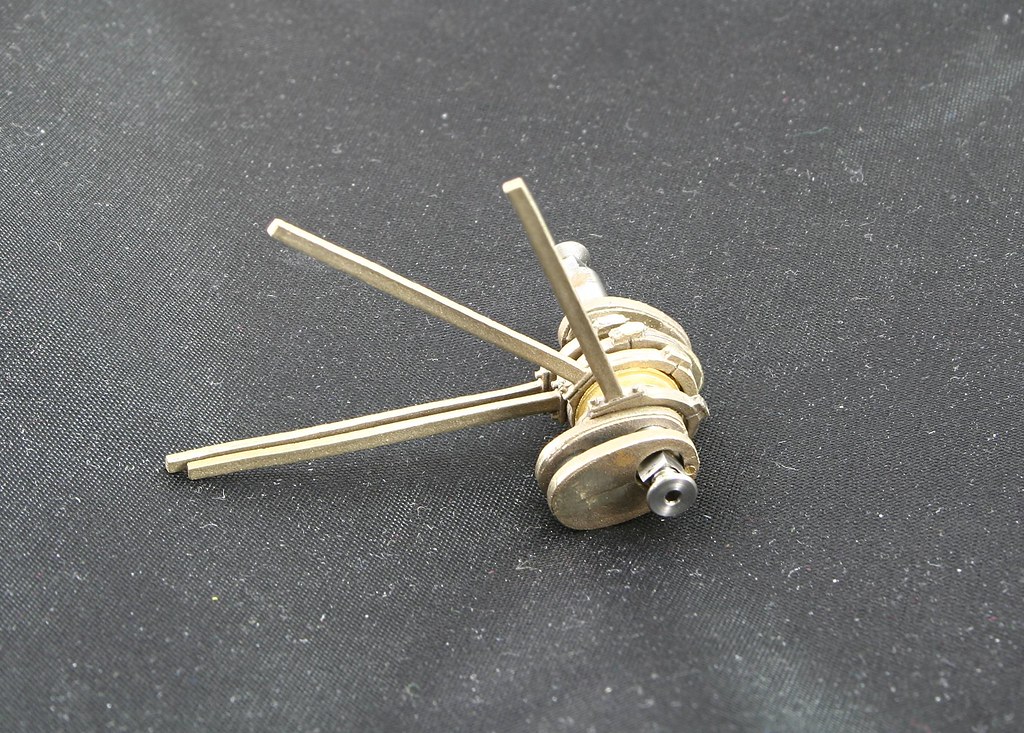 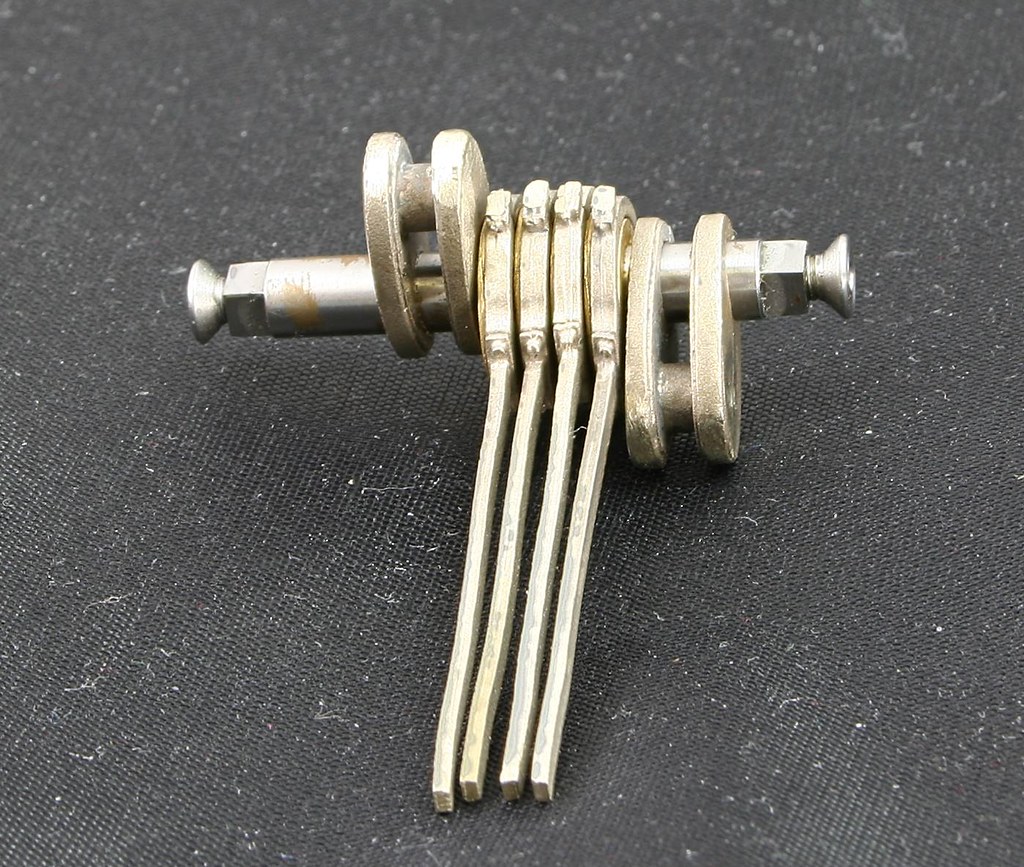 Much more work to do on them of course - including attempting to straighten those straps...
Regards,
Rob
http://www.railway-models-and-art.co.uk
http://www.flickr.com/photos/robpulham/
Top

So Rob, the stupid question I have to ask is, how do the connecting rods rotate around the crank with the axle in the way???

Cue sound of axle being sawn !

looking good Rob...I wish that I could get on with my (very small) collection of 'O' gauge LNER kits.....one day....keep up the good work sir...