That's the photo that I am working from - the guy that I am building it for bought a copy. I found another but it's of the same side taken from the rear at the same time but the resolution is poor so much detail is lost.

Thanks for taking the time to look it is appreciated.

by john coffin
Rob,
sent you a couple of photos by email, they are right side of 600 series,
hopefully they will help you see more.

by 9E
This one I presume:

I don't know what the Transport Treasury regard as the right (ie from the front or from the driver's perspective, but a search for 64206 in their lists:

yields a couple of results. It may be worth your client asking if they would add a copy to their digital collection to see if they are any use. Assuming they or you haven't already have tried.

I was having a bit of a slow moment struggling to find the photos referred to in the lists but your comment about asking them to add them to the digital lists finally sunk in. DOH! it's been one of those days and the reason why I am actively not doing any modelling tonight.

I should probably have been clearer, but I didn't want to find I was teaching you to suck eggs! On the latest news page there's a statement that if there are particular images you're interested in then email them and they'll add them to their digital gallery (where possible I assume). I did that a while back for a couple of Jubilee photos and they were very helpful.

by Robpulham
No problem Simon,

As I say I've had one of those days.

by drmditch
More of 251's cab.
(Sorry, the only one I took of the interior of the LH side didn't work very well.
If required I can try again next week!)

by Robpulham
Thanks again Caroline, all grist to the mill.

by Robpulham
Modelling took a bit of a back seat last week because everything I touched turned pear shaped so I didn’t risk it.
This week I have made more progress with the cab adding al the additional bolt heads that are visible in the photos and replacing those already pressed out on the right hand side of the loco to match. A couple of weeks or so ago I was given an RSU which was surplus to requirements by a neighbour who was moving house and I got around to setting it up and trying it out on these bolt heads/rivets. I have to say that it doesn’t look much (I was told that it was made eons ago by Bernard Weller) but it does what it says on the tin and I am converted. I just need to get used to it’s vagaries and how little solder I can get away with now. 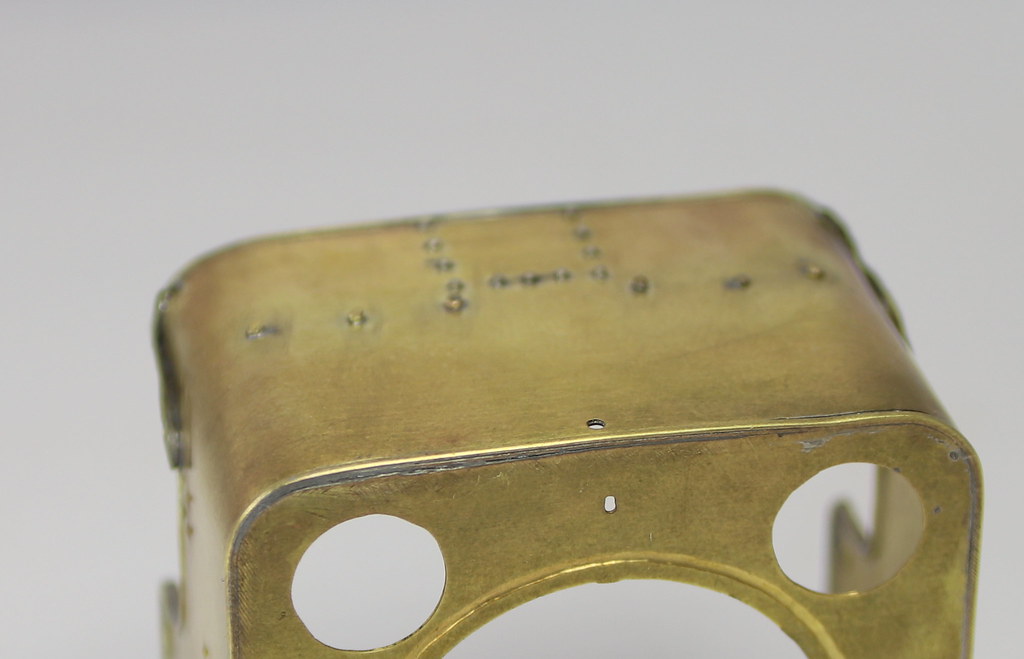 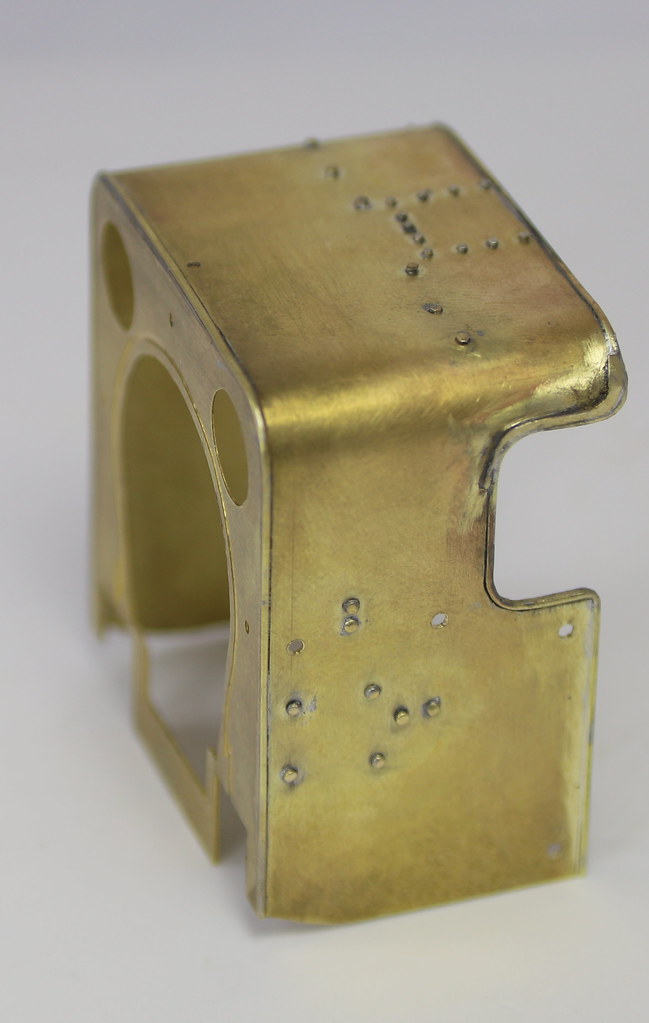 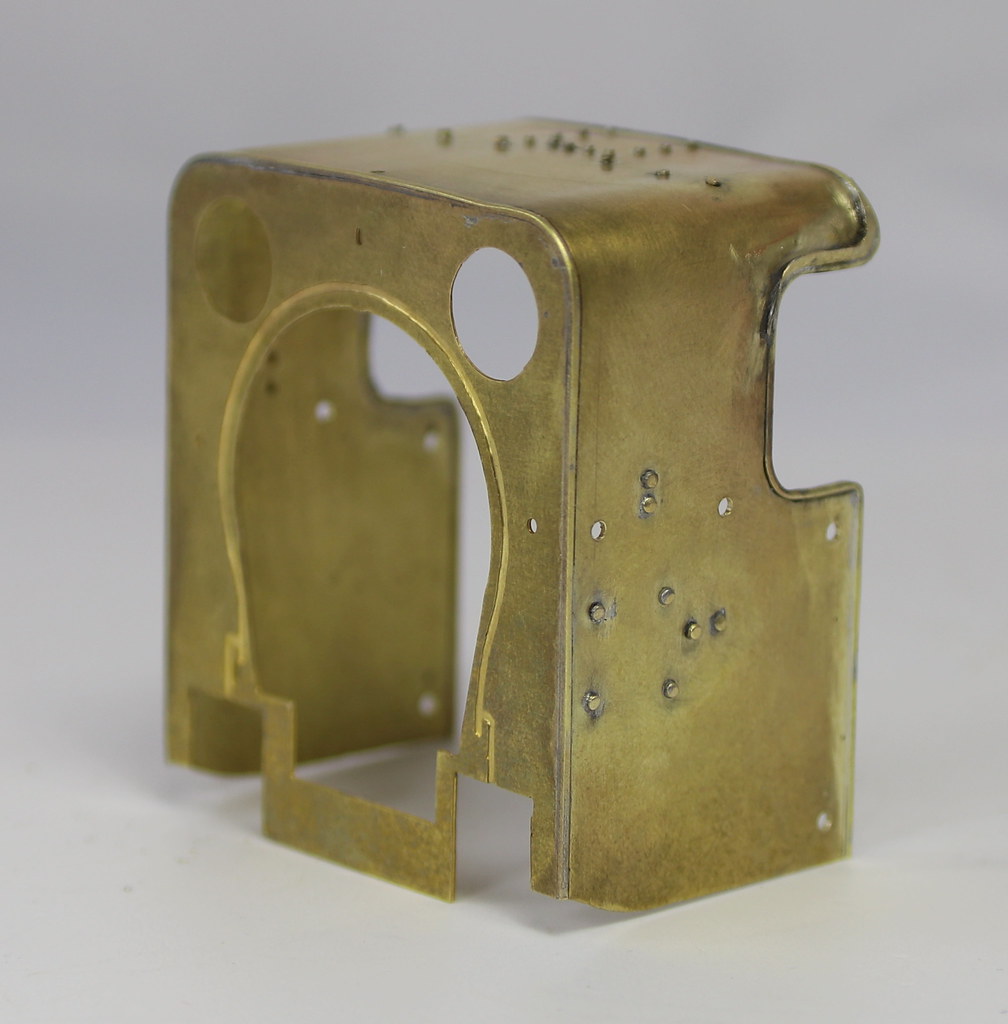 After seeing that Tony Geary had done a proper job on fitting the rather shapely rain strips above the cab cut out’s I bit the bullet, took them off and fitted them as correct as I can. They say practice makes perfect and so it did the first one was a right pain to get somewhere near right but the second one almost fell into place. 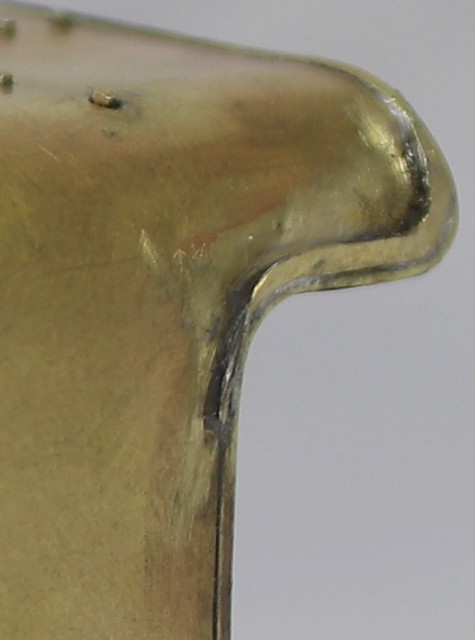 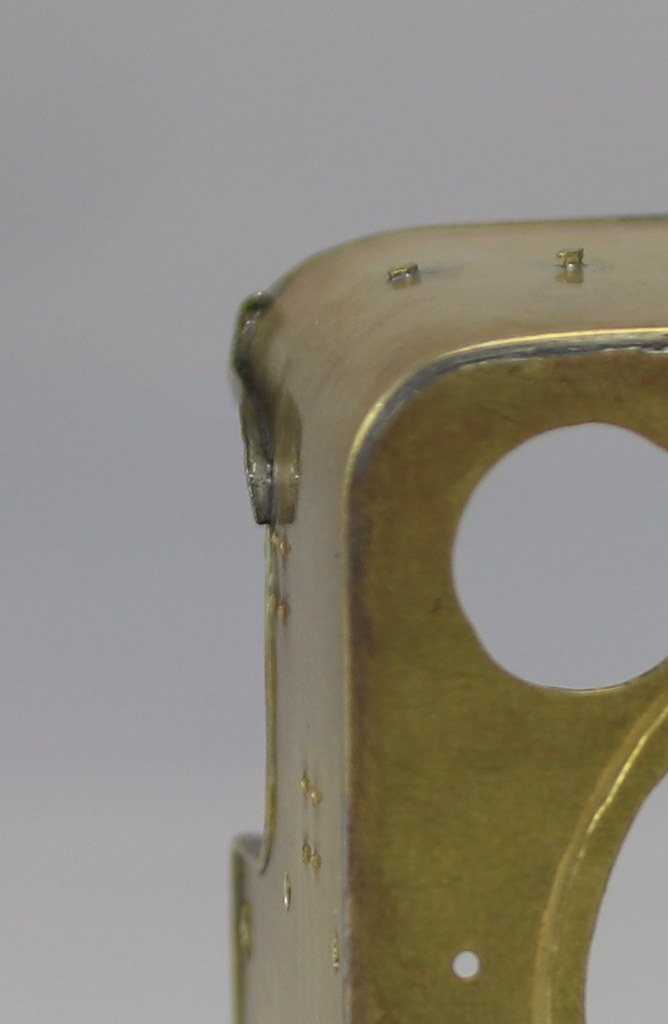 by Robpulham
Having sorted out the additional bolt/rivet heads on the left side of the cab I drilled out the punched version on the right side and added 3d versions to make them match the other side. I also fitted all the hand rail knobs but I will fit the rails themselves a bit nearer the finish line. 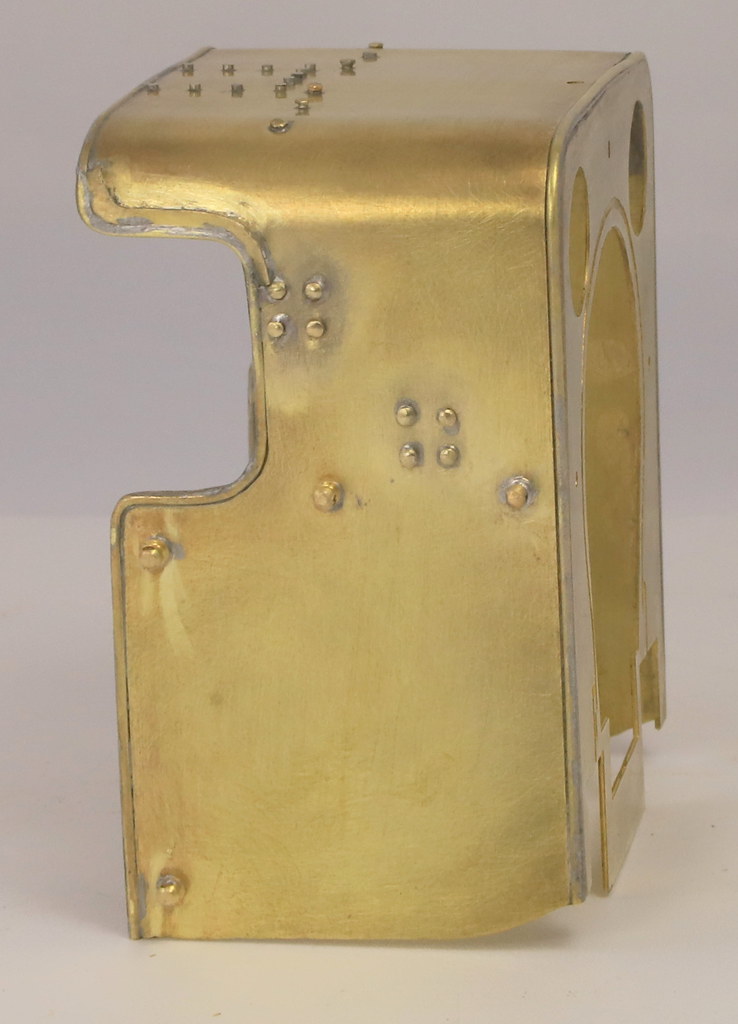 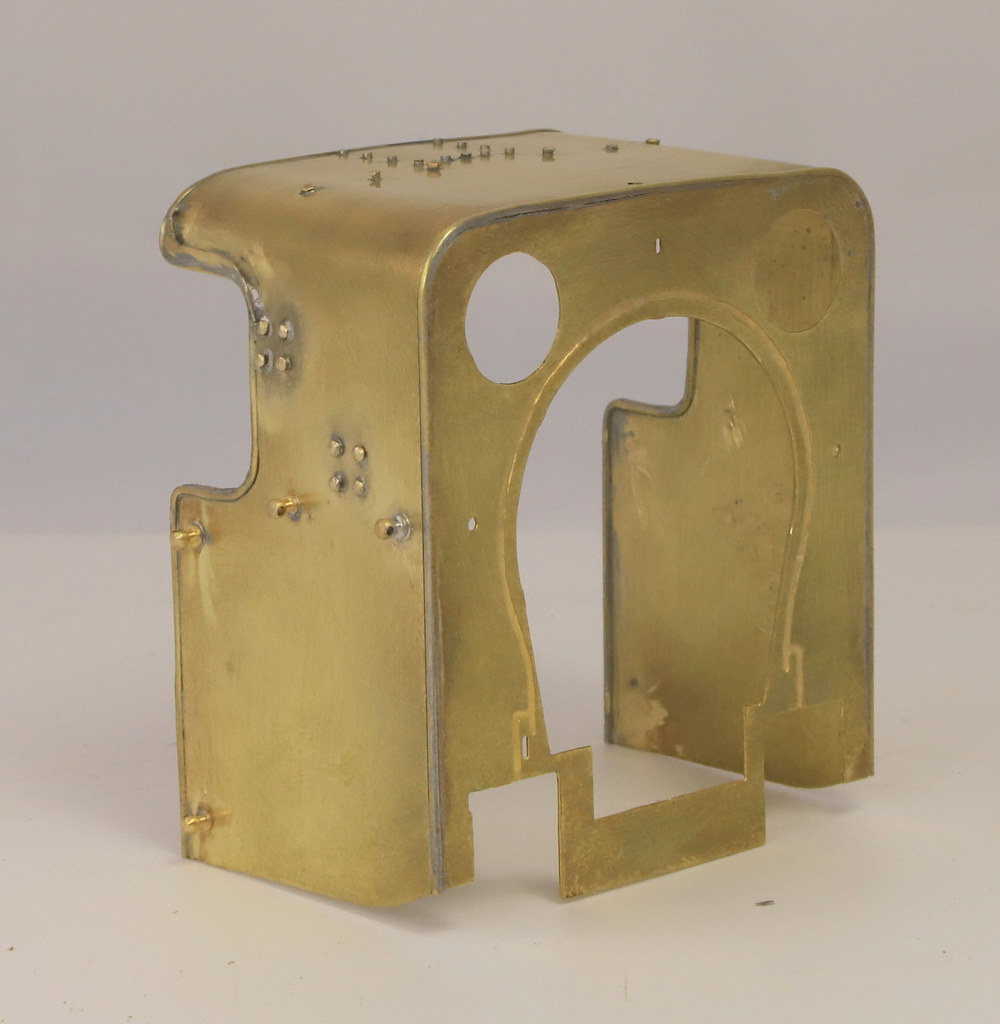 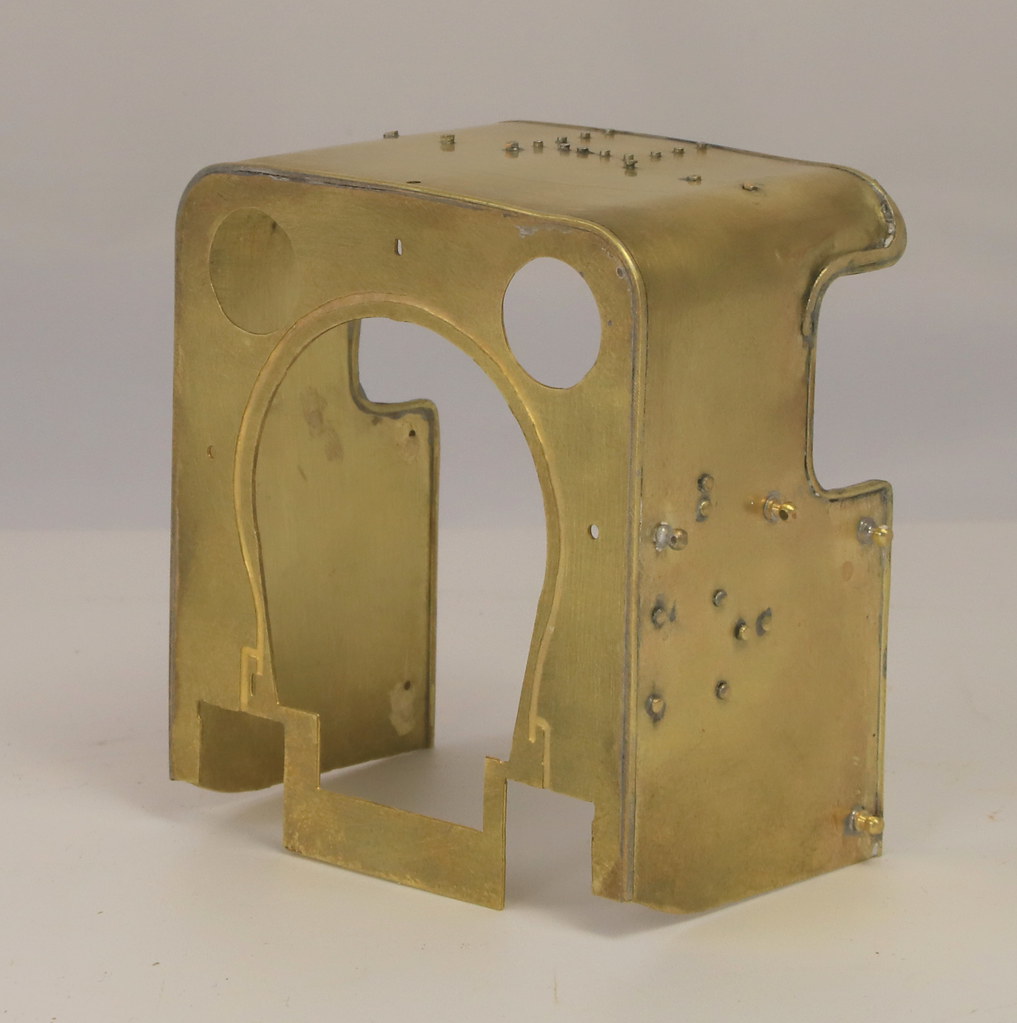 by Robpulham
I am still beavering away at the J6. The boiler bands are on but despite having Tony’s build as a guide I added two 0.7mm infill pieces down the side of the smokebox as Tony had but initially made them too deep thankfully this was all done before attaching it to the smokebox so it was a simple matter to take it of and adjust it.


I made a new mounting plate for the snifting valve which it now fixed in place and I have made a start on fitting the very prominent set of bolt/rivet heads bellow it on the photo that I am working to. – They still need a bit more work with files to make them a bit shallower and more even.


Again, I followed Tony’s lead and started to drill out the chimney in my little lathe. Sadly I don’t have Tony’s touch because I had only got to a 4.5mm drill when I must have gone a little too deep and the spigot came away from the chimney. I attempted to make a collet from wood as suggested by Davis Smith (DLOS) but my chimney casting was ever so slightly misshapen and I couldn’t manage to get it to centre in my 3 jaw chuck (I don’t have a four jaw at present).

I did the rest, the old-fashioned way and set to with a 2nd cut round file. In all honesty I think that it took less time to file it out than I had spent messing about trying to hold the casting to use a drill. I am just glad that I had drilled the base for the bolt heads before starting on drilling the inside or I may not have had the patience for it at that point.

Like the chimney casting the dome comes with a cast threaded spigot I suppose the original idea being that you would screw it to the boiler top. I opted to cut the spigot away and then using some emery paper wrapped around the boiler. I rubbed away at the dome until I got a good fit before cutting a couple of slots for the boiler band with a slitting disk in my Dremel. 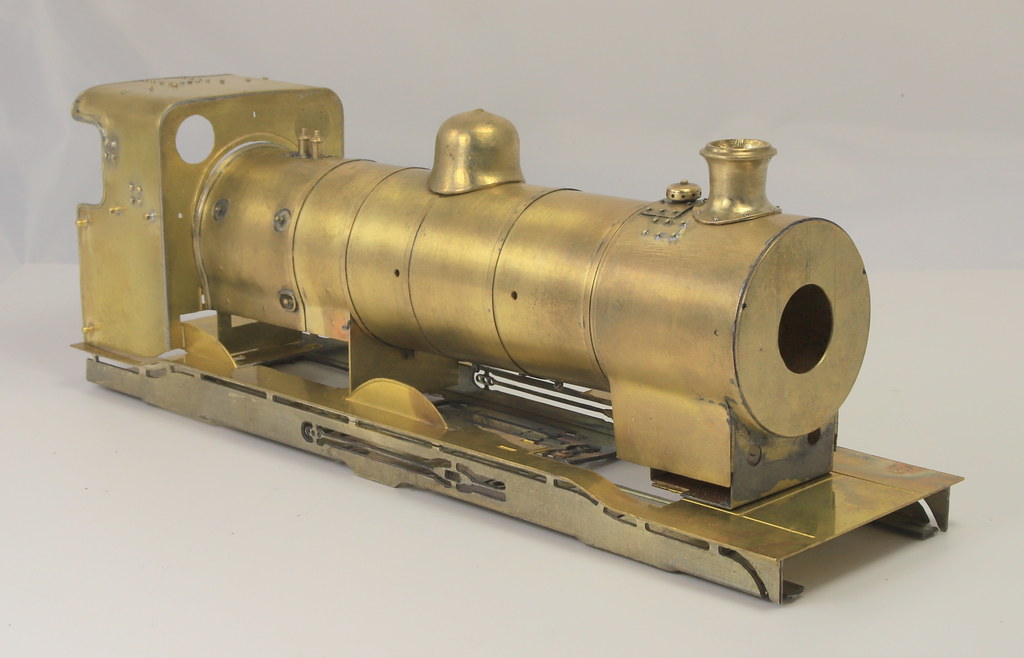 Not really much to show for all that work… as you will note it’s all just propped in place for the photo.

by Robpulham
Still working on the detail from my photo of 64206 and I noted that there was a semicircle of rivets/bolt heads on the left side of the smokebox just above the handrail surrounding the bottom half of an oval patch.

The patch is made from some very thin brass shim that I bought from china via eBay several years ago. It’s just under 0.1mm thick 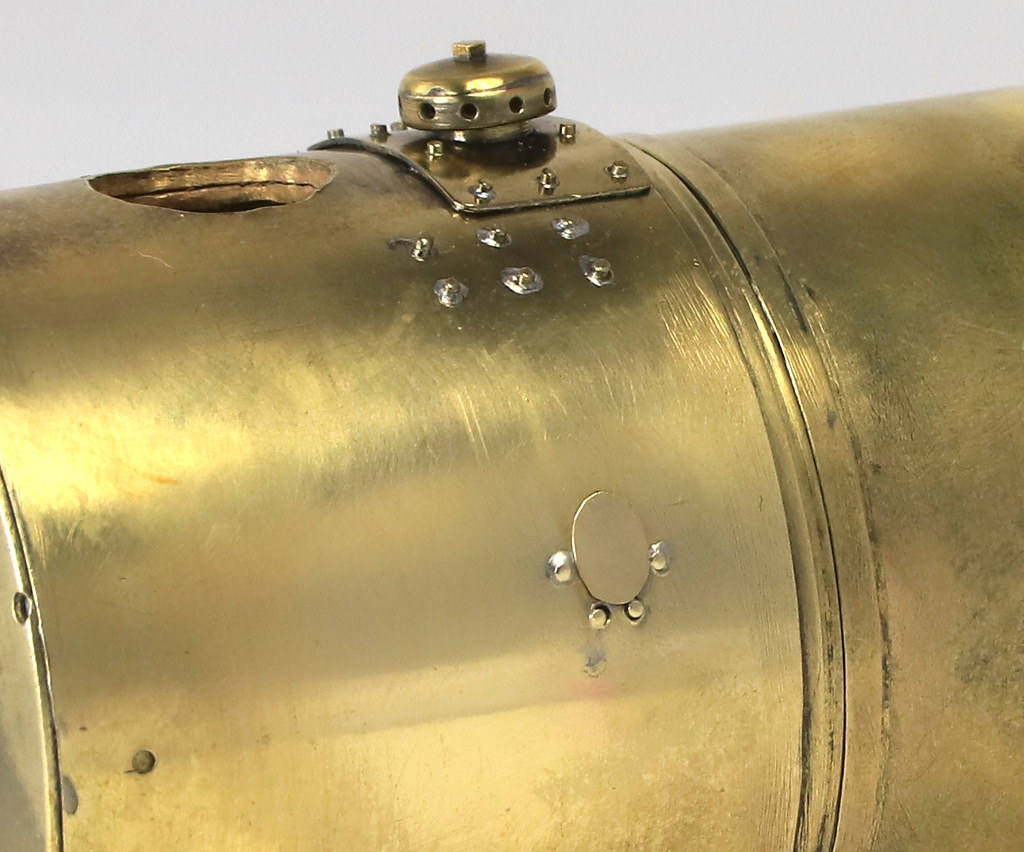 Next up I fitted the internal window frames and the associated rivets/bolt heads on the cab front. 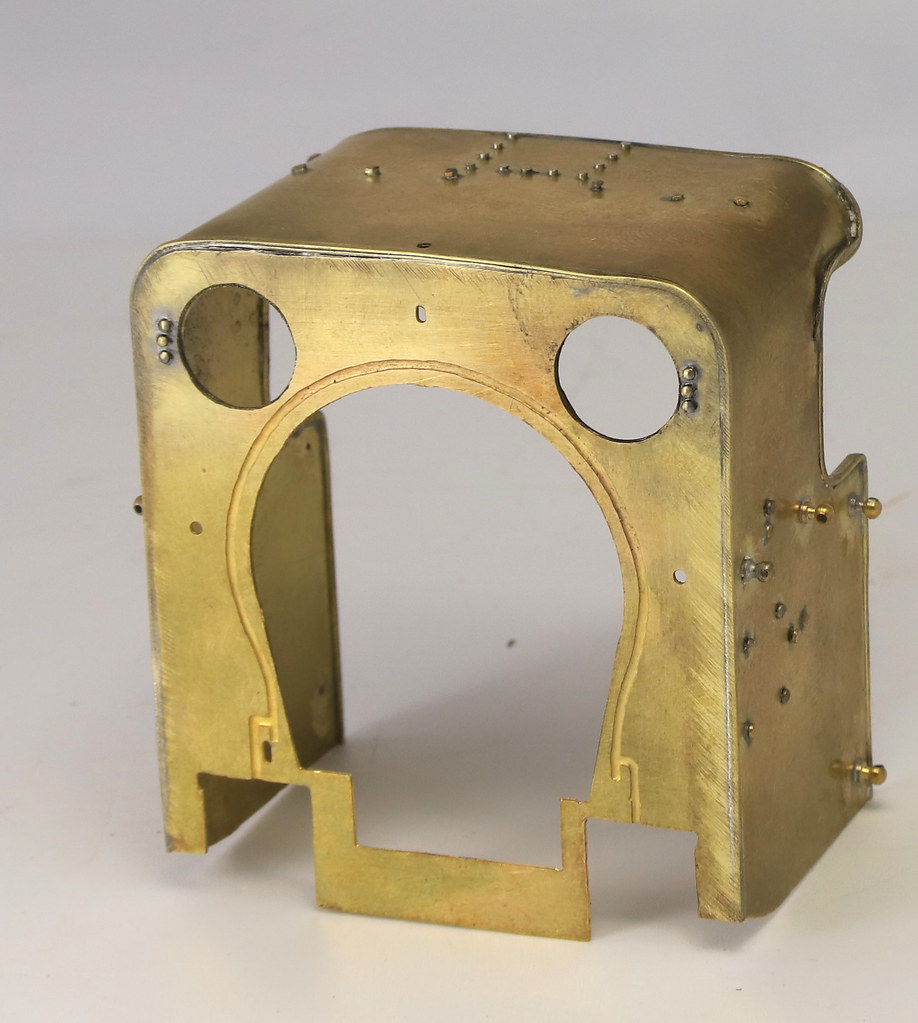 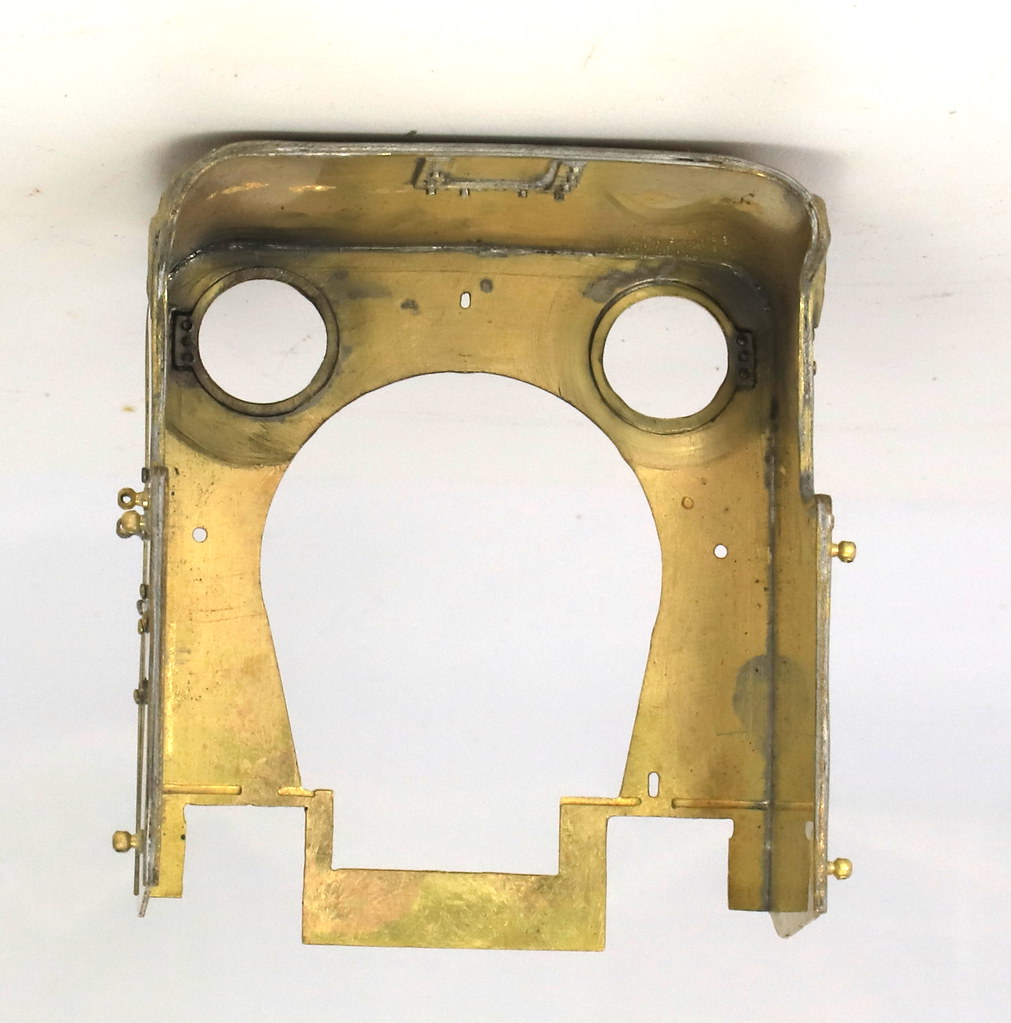 Hopefully that should be it for the boiler/smokebox and external cab details until I start fitting the castings pipe runs etc.

by Robpulham
Although I am working in the general direction of getting the footplate complete so that I can attach the cab/boiler etc. to it. I am not ding things in any particular order so when I glanced at the sketch in the instructions for the cab floor I thought I would have a go at that before fitting the splasher tops.

The sketch only shows the rear of the cab splashers/floor and at first, I took the etched lines at the rear for fold lines. Having folded it I couldn’t get the floor to fit so I ended up straightening it out and soldering it up. Surprise, surprise, it now was too long for the cab. I surmised that I would have to cut along the half etched lines to get it to it. However after a bit of head scratching I emailed David Hill (Gladiator) to ask how he had done it on his before doing something that while not irreversible would make a good bit more work. David replied very quickly and advised that the cab floor did indeed need cutting at the half etched line because the kit has options for both the 521 536 series locos with the 521 series having a much deeper cab. A point that I had completely missed!! 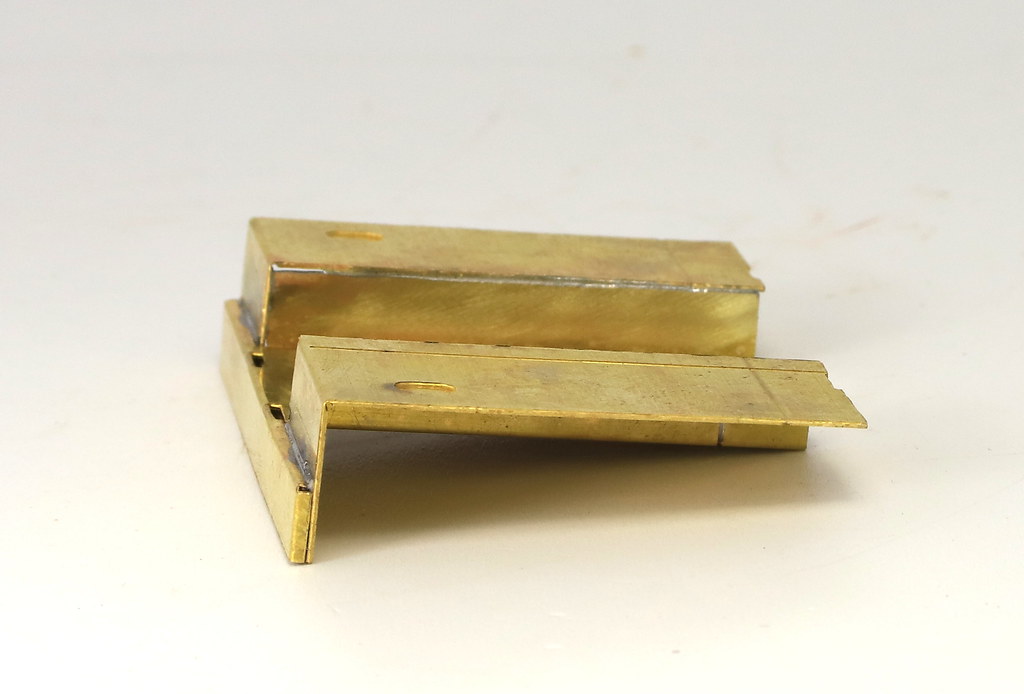 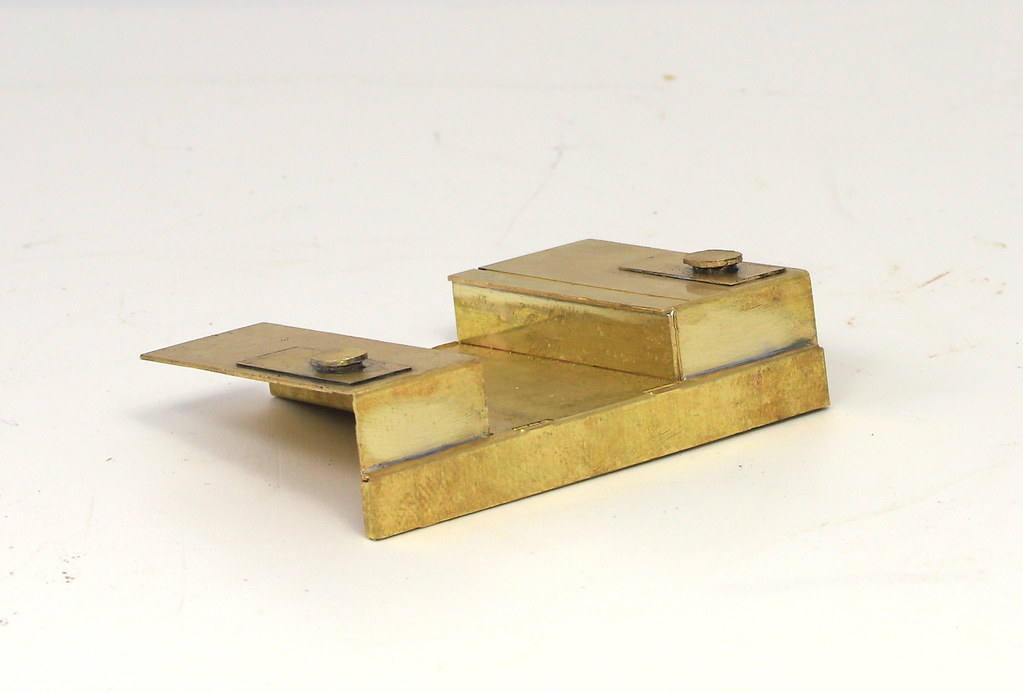 I made up the reverser and fitted it to the cab. 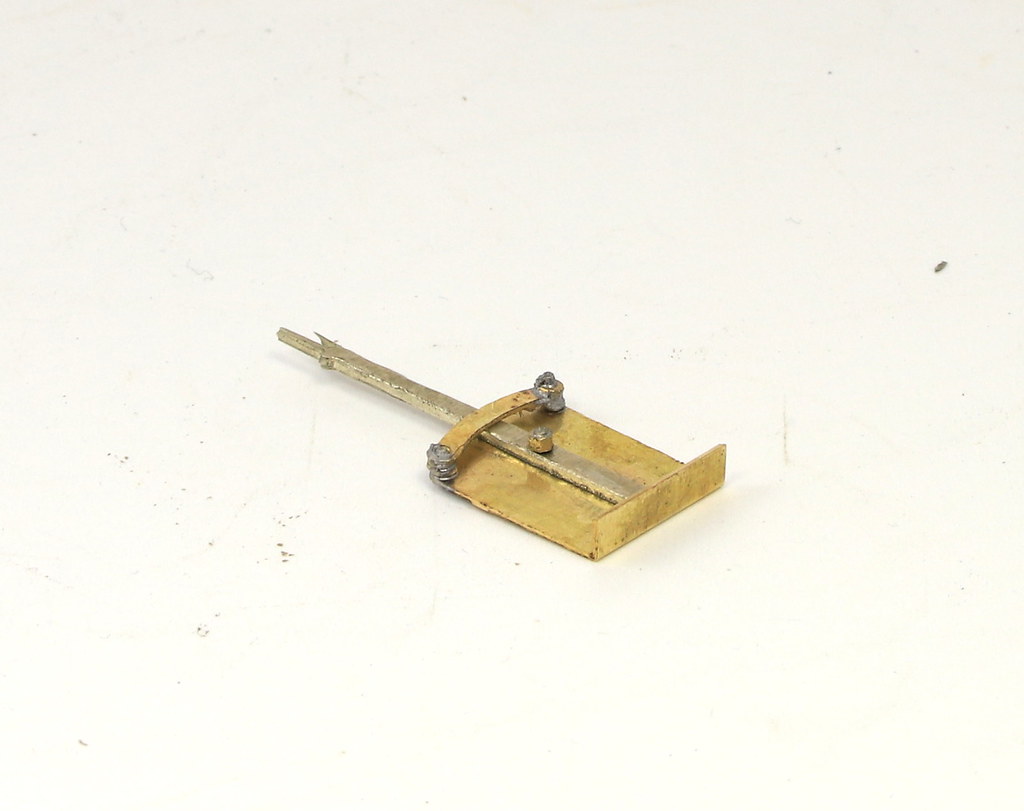 After having a look at the reverser in the C1 I added a couple of bits of scrap etch to give a little more detail – not very clear in the shot below. Strictly speaking the lever should be on the outside of the ratchet plate not in between as shown in the instructions 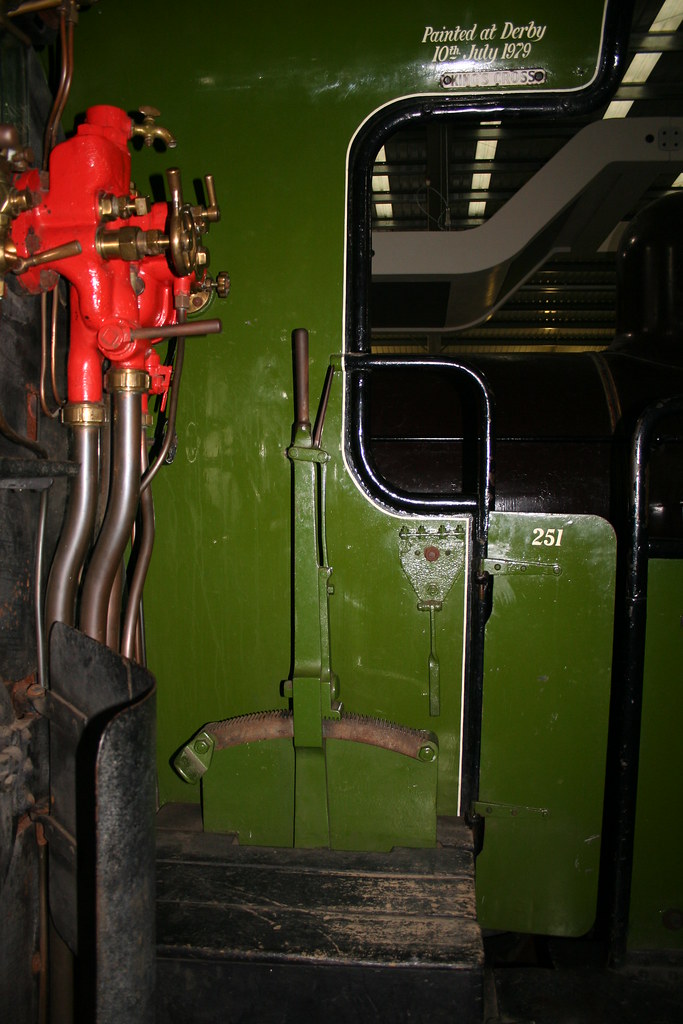 I decided to leave it as is, as it will be lot in the gloom of the cab.

It was probably a sign that I should have left it alone at this point but for the life of me I could only find two of the four splasher tops. I decided to cut some replacements out of 10 thou sheet on my “Mini Formit” guillotine (which I have used extensively throughout this build). Parts duly cut, the first front sandbox/splasher went on easily then it took over two hours to fit the rest and, in the end, I cut it off the cradle to make it easier to solder from the back.

For whatever reason they sorely tested my patience. It was even more frustrating when trying to fit the ashpan sides as again one went on easily without issue to the second was a nightmare which resulted in the splasher top coming adrift several times before I had both in place to my satisfaction. On the back of that I had an evening off last night.

But here is the state of play. 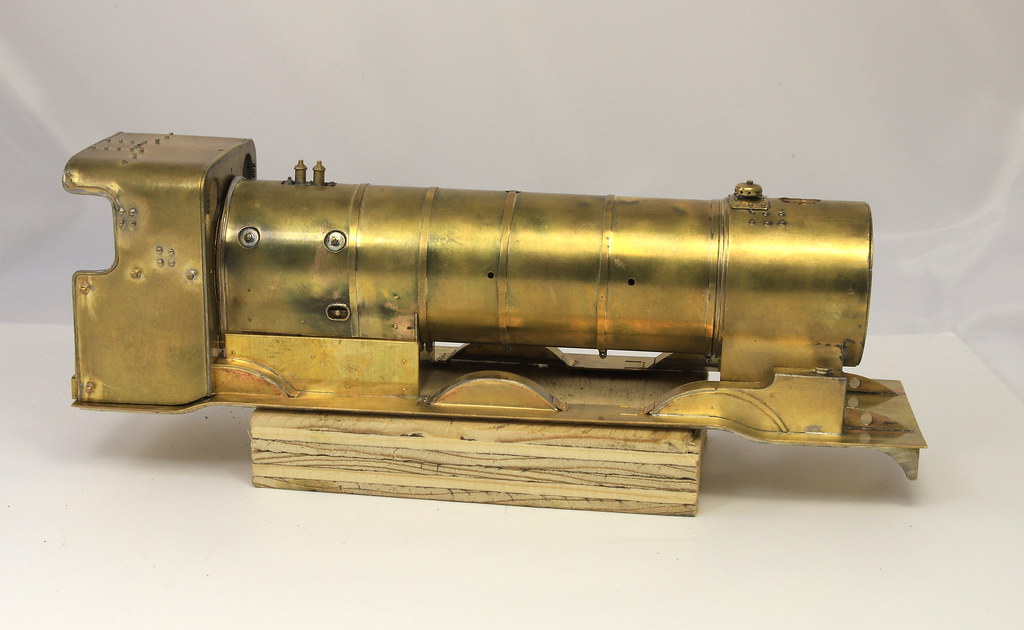 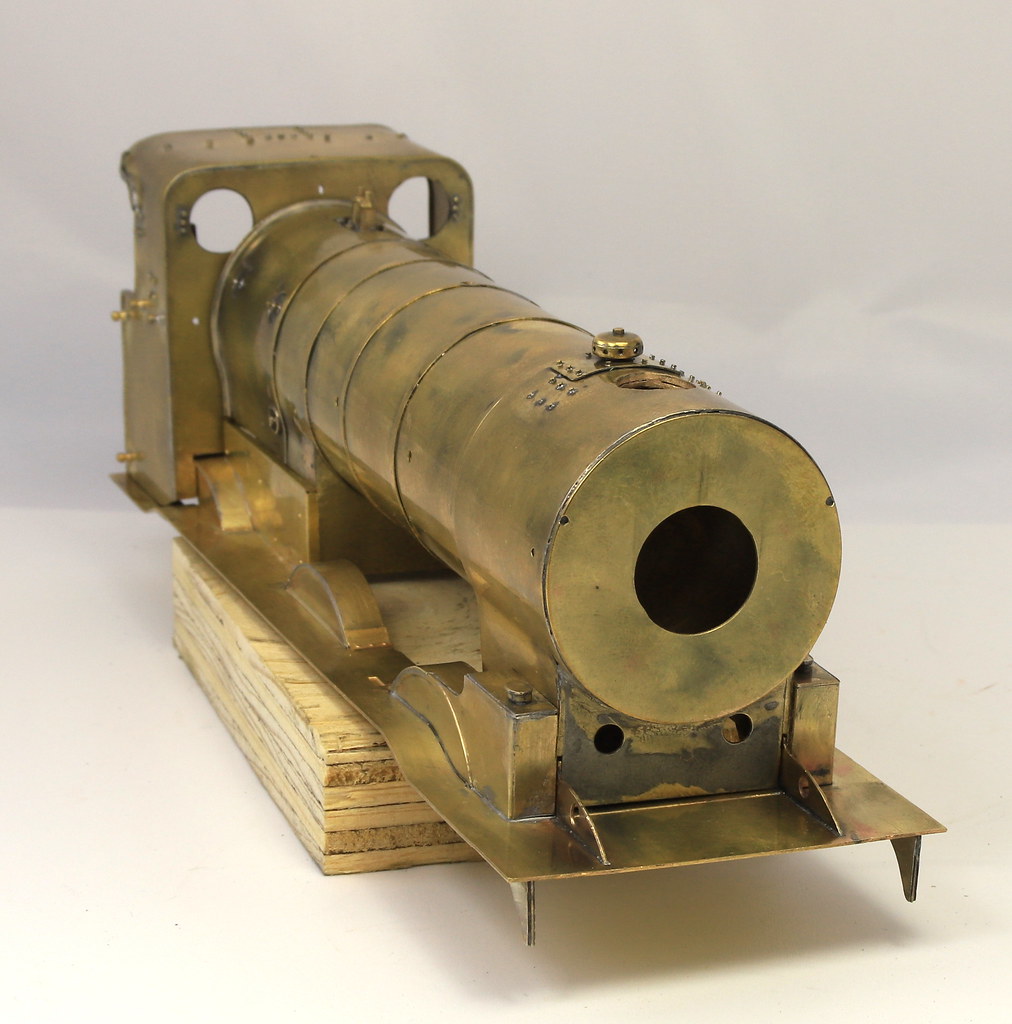 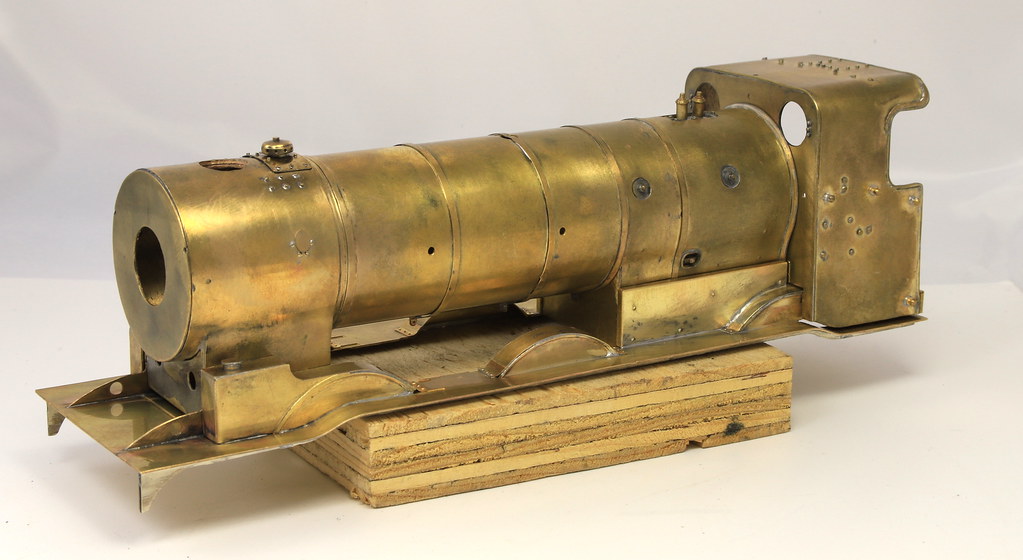 Still a bit of detailing to go on before I fix things together but I am getting there.

by Robpulham
The latest bit of modelling madness is a couple of Wakefield mechanical lubricators.

The kit provides a couple of nice but generic lubricator castings which have a lid and a hand wheel but no pipework. The lubricators fitted to 64206 are a little unusual to my eyes at least in that the pipes all come out of the bottom whereas I am more used to then coming out at the bottom of one or both sides. Now I could have followed Tony’s example and gone for some Ragstone castings but where would be the fun in that.
Cutting out and drilling all the parts (18 each not including the pipes) was relatively easy the fun part was soldering them all together without it all collapsing in a heap. 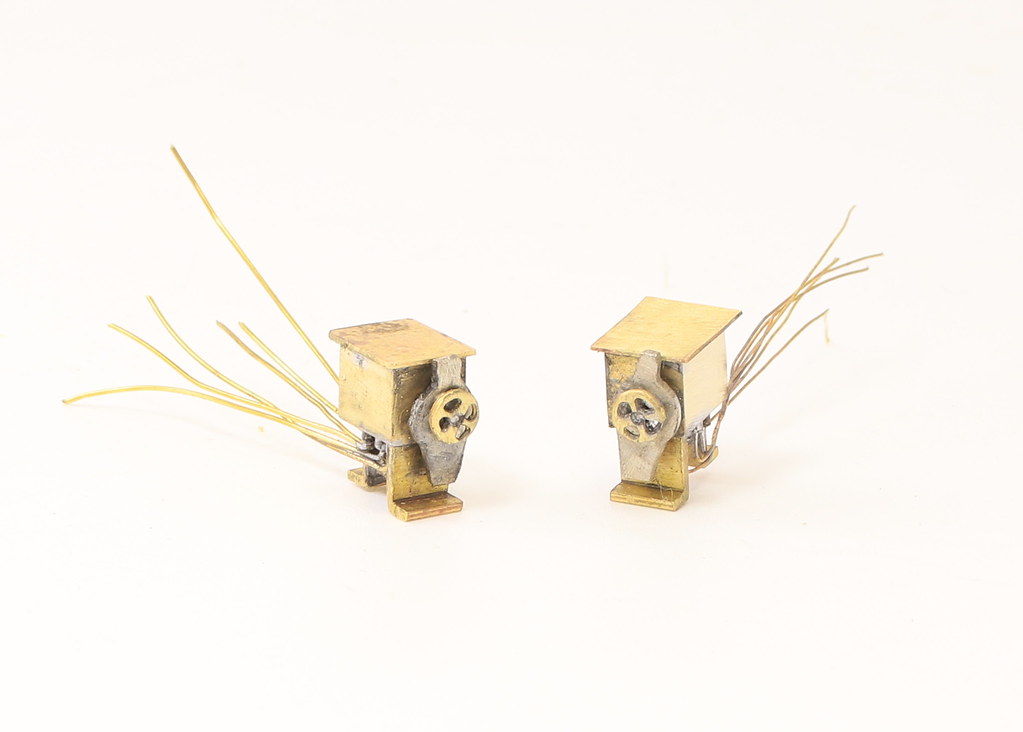 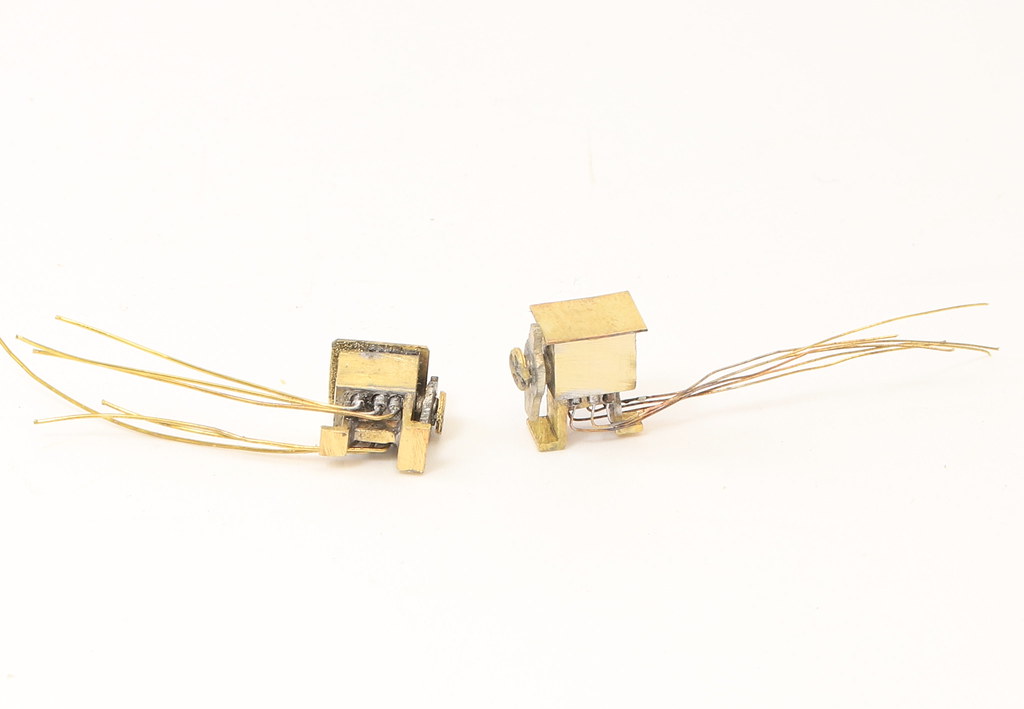 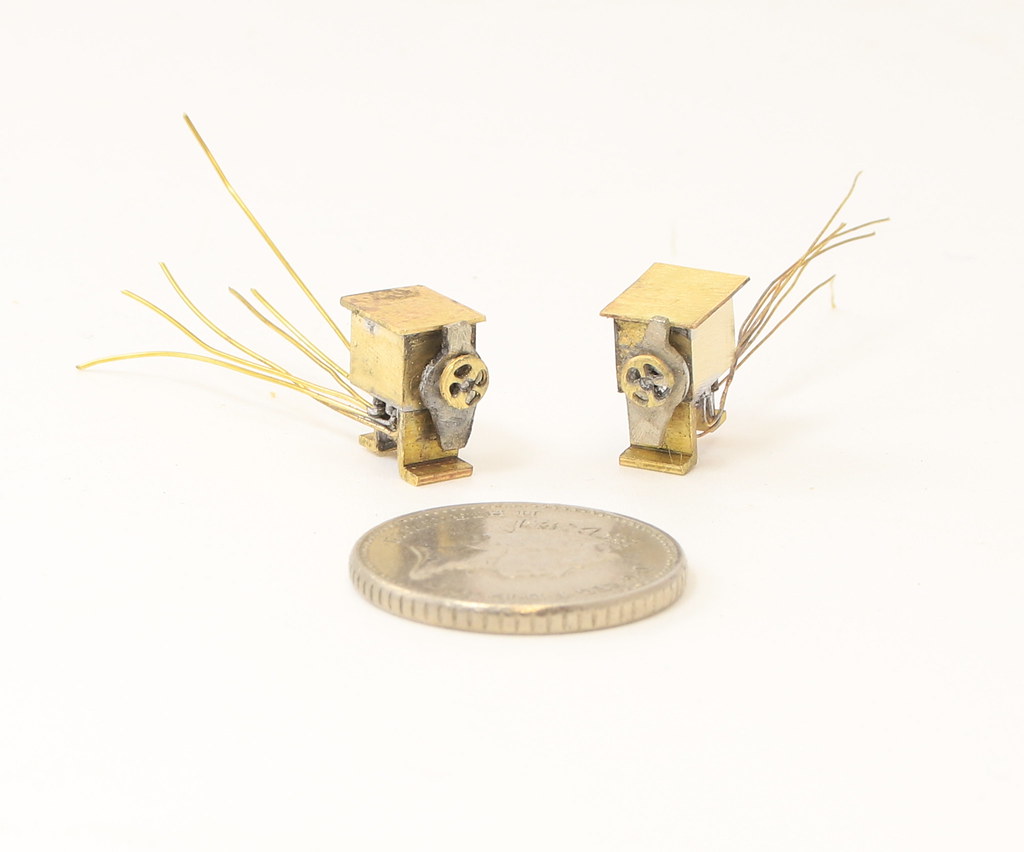 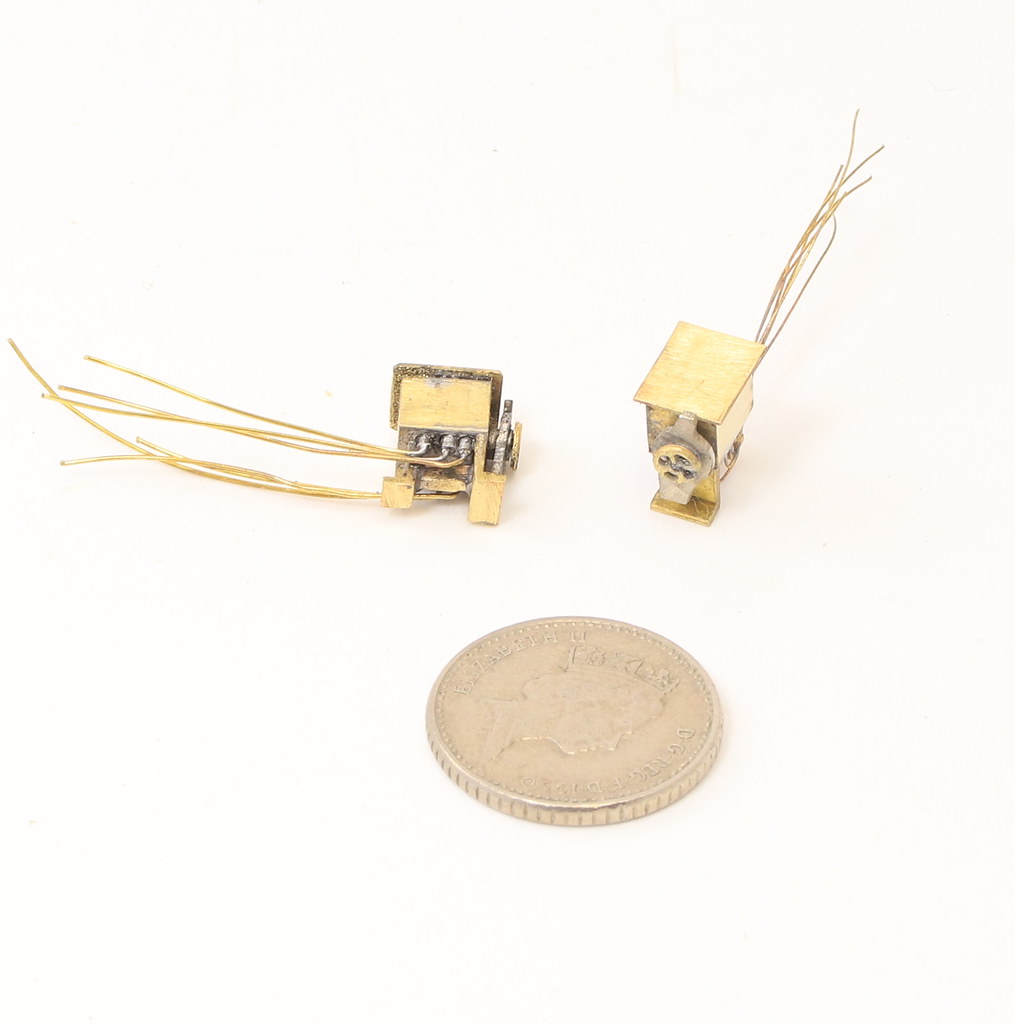 Not the easiest thing in the world to photograph but after taking the earlier shots I remembered the quite prominent wingnut on the top holding the lid shut. 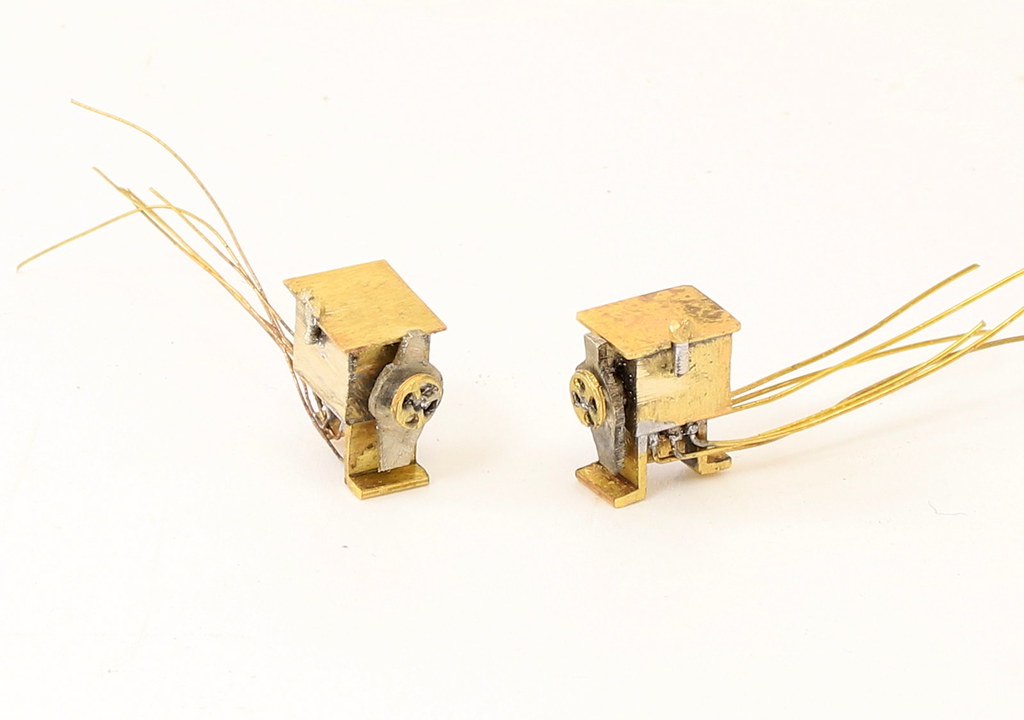 I made it from a 16 ba cheese head screw with the head squashed in a pair of pliers and then filed to shape.

by Robpulham
This week has seen the lubricators fitted along with the firebox/ashpan sides. Then I fitted all the main components together and fitted it to the chassis. I needed to file a bit of the undersides at both ends to get the chassis to mate with the body. This is because I have used the narrowest frame spacer due to the need to get the loco around 5’ curves. 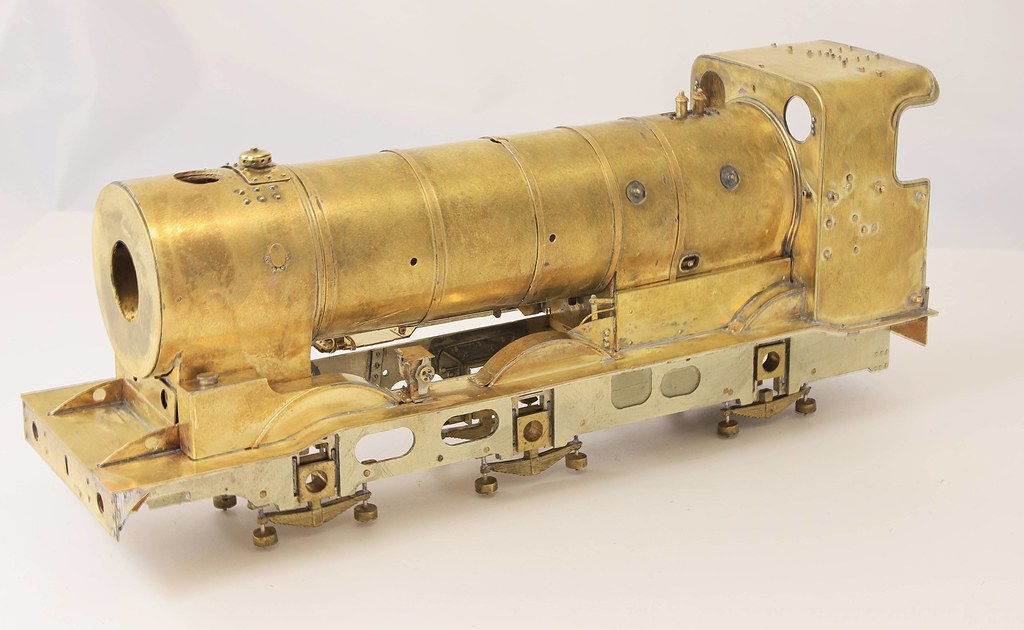 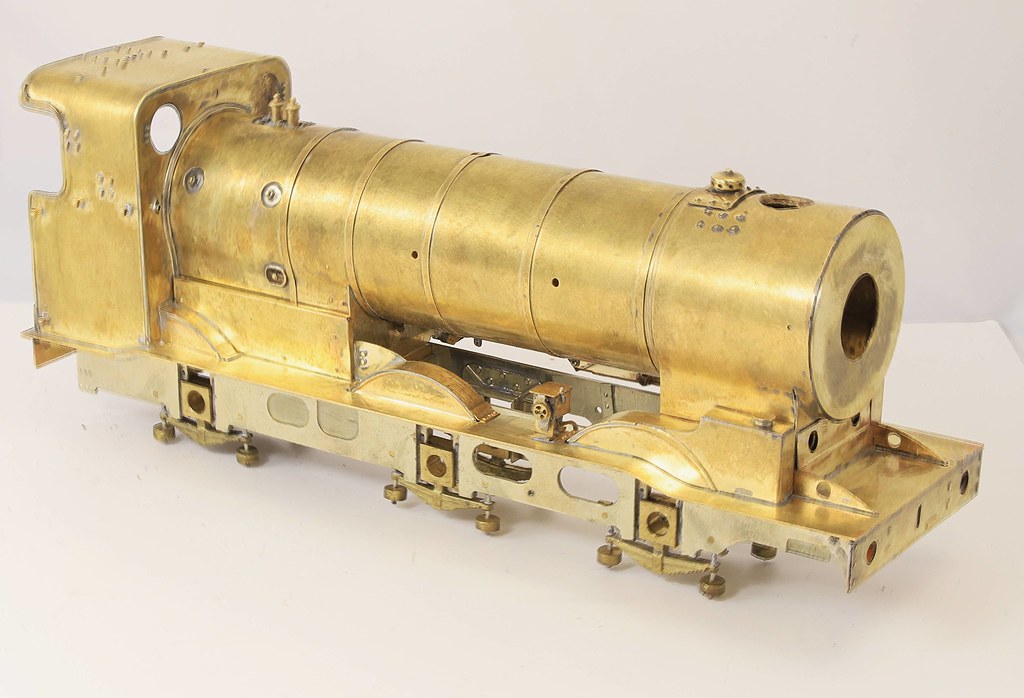 But it all fits now; I have just rested the chimney and dome on for the photo. 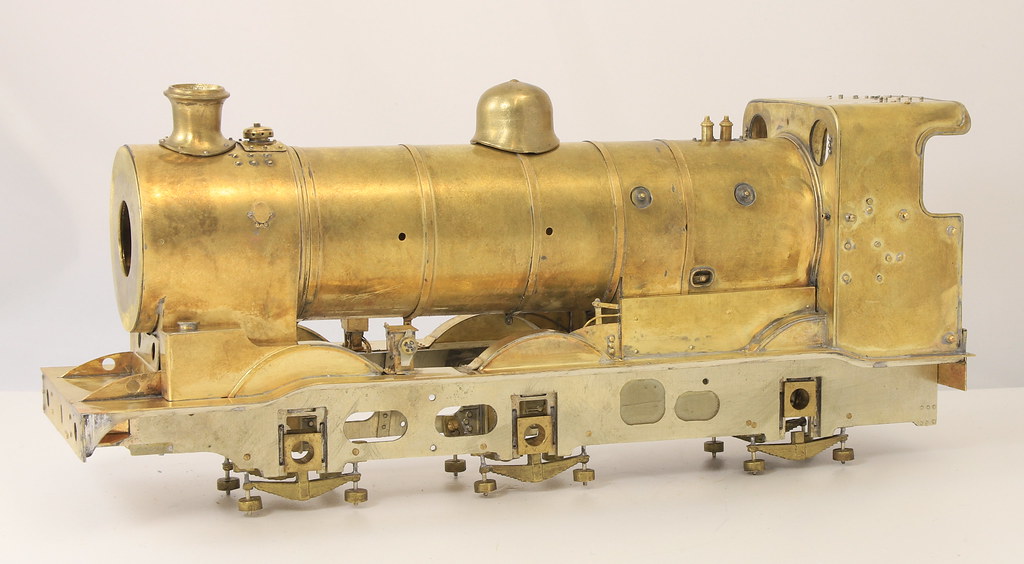 I have also fitted the splashers and cab floor and fitted a couple of short lengths of tube through the front of the cab for the hand rails. On the GA and on internal shots of the C1 cab the right side handrail has a handwheel attached to it so I have added that too. 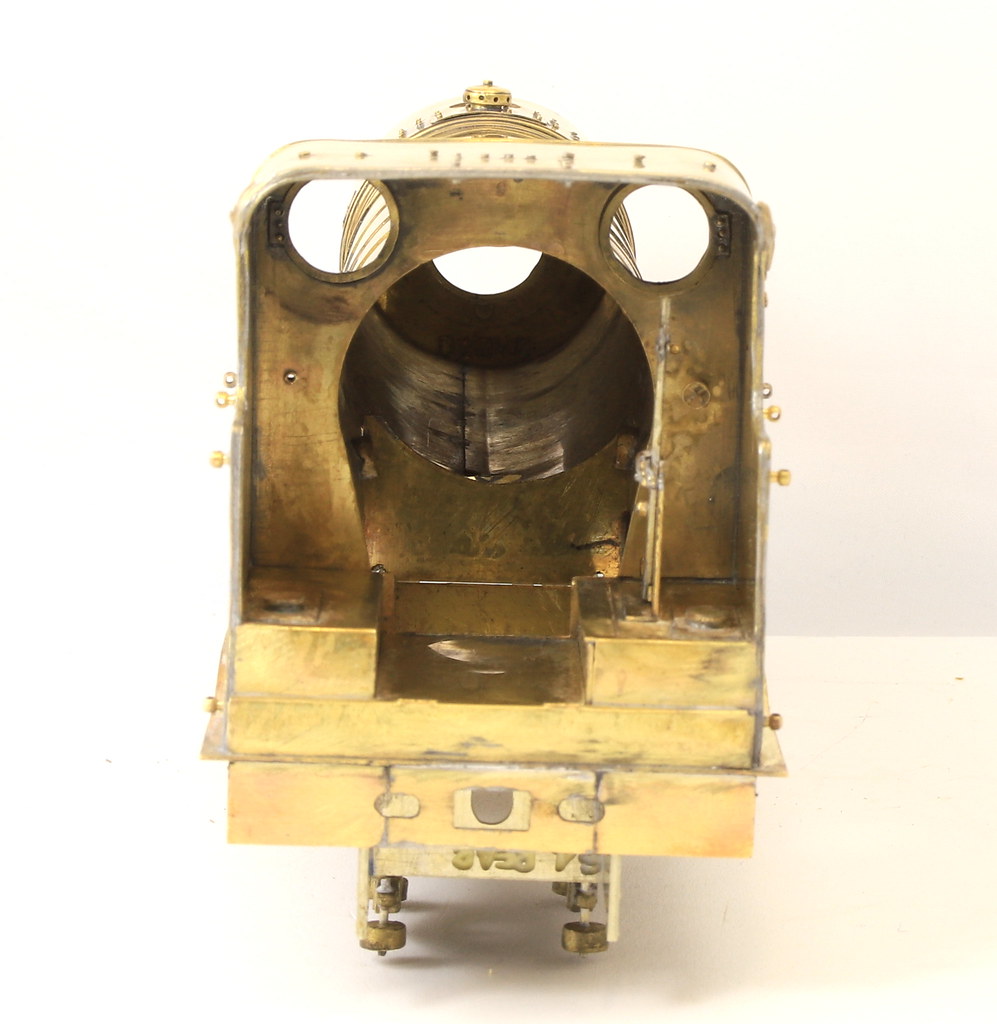 Once I had the cab floor fitted I could determine the fit of the backhead. The Laurie Griffin castings although quoted as being for a J6 among other locos was a little short so I added a strip to the bottom. I suppose that makes a change from hacking bit of the sides to make them fit in cabs. 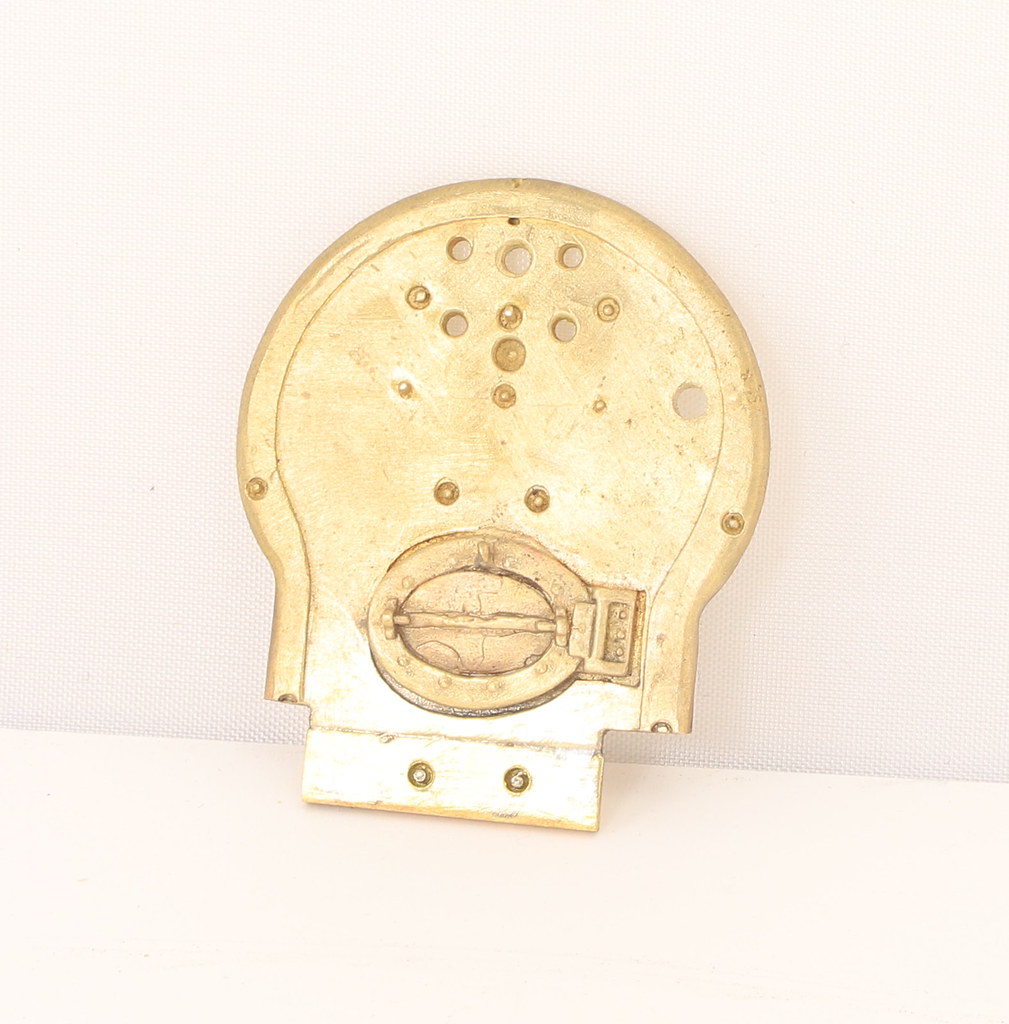