Sorry, yes it's the loco valences that I am talking about.

Regarding the coal rails being a little wavy, they are so much stronger now that they have half round beading over them but the weak bit is the brackets that hold them to the inside of the tender flares. They have had much straightening after handling during the build - which was why I left them until almost the end before I added them.
Regards,
Rob
http://www.railway-models-and-art.co.uk
http://www.flickr.com/photos/robpulham/
Top

I understand Rob, I think in 4mm it is quite difficult to do it without filing the fold line.

As for the handling the of various items, that is something that we have to consider when
writing instructions, but not sure how to overcome it.

Well life intervened and the J6 hit the shelf of queens, but this post is to resurrect the thread as I hope to be back on with it in the next week or so.
Regards,
Rob
http://www.railway-models-and-art.co.uk
http://www.flickr.com/photos/robpulham/
Top

Despite being head cook and bottle washer at the minute I have found a little time to pick up the J6 again.

The cab of the J6 has half round beading both around the cab opening and, after studying photos closely, around the front of the cab too. - On the cab etch there is a half etched lip for both and initially I thought that the one at the cab front was to allow for the front to fit better but realised that on the other side were half etched dimples in rivet locations which meant that the half etch would be on the outside not the inside where it would need to be if the cab front sat in it. This lead me to have a look at the photos more closely and note the beading on the front. Despite seeing Tony's recent build I was doubting myself.

The kit has options to build both the Ivatt and the Gresley versions of the J6 and I am building the latter. The kit has two wrap over cab etches and two etched beads, (because the cab openings were a lot bigger on the Ivatt version). Having seen Tony's build I elected to follow his lead and use half round soft brass wire instead of the etch supplied to give more shape and definition to the bead.

Because of the need to shape the bead around the cab openings I added it while the cab was still flat. the half etched guide on my cab was slightly over etched in places so it made for an interesting job but enjoyable task. Despite carefully finding the centre and measuring the start of each bend I still needed to do quite a bit of adjusting of the bend before it sat nicely on the front. 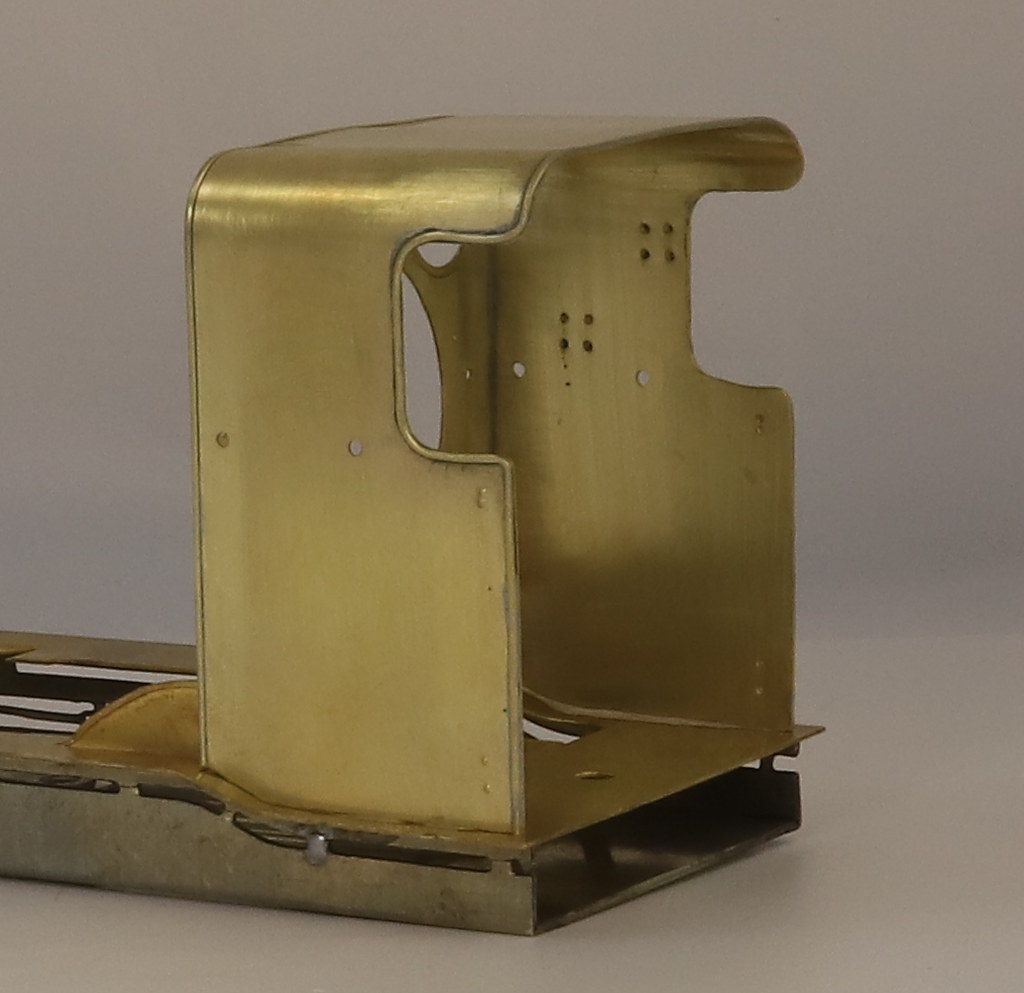 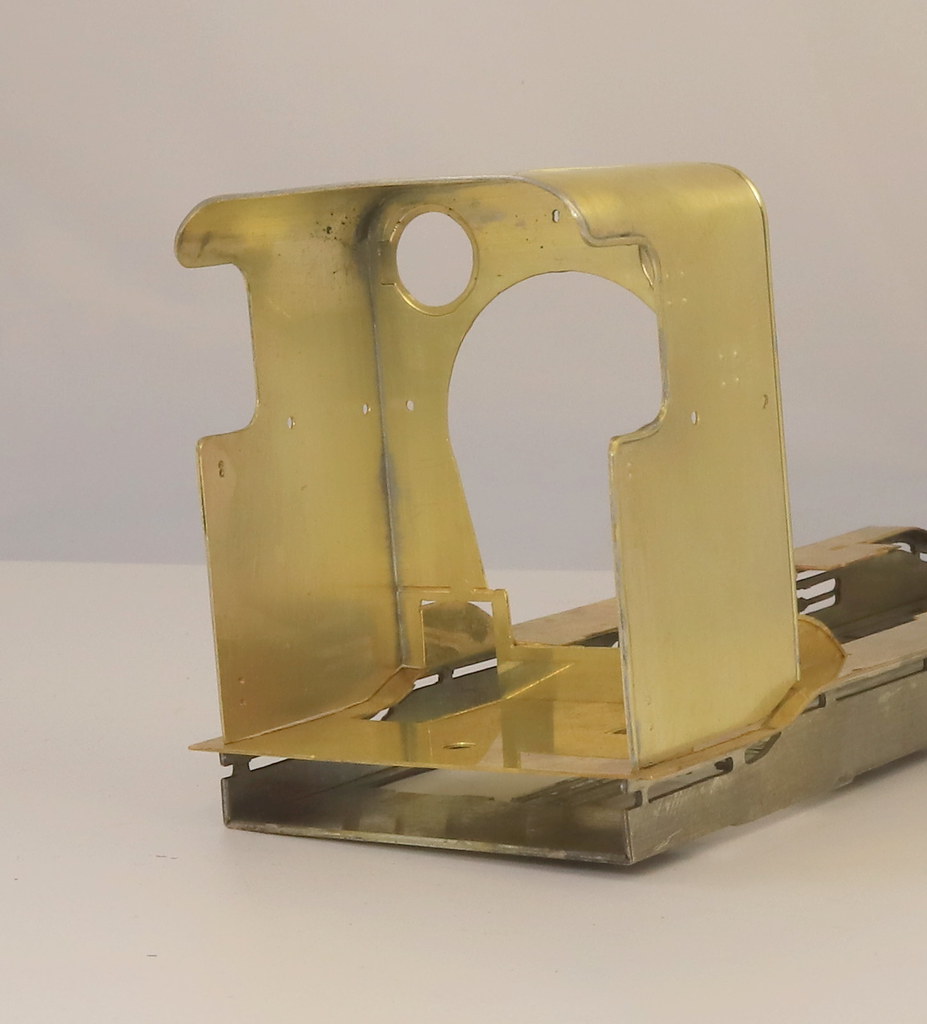 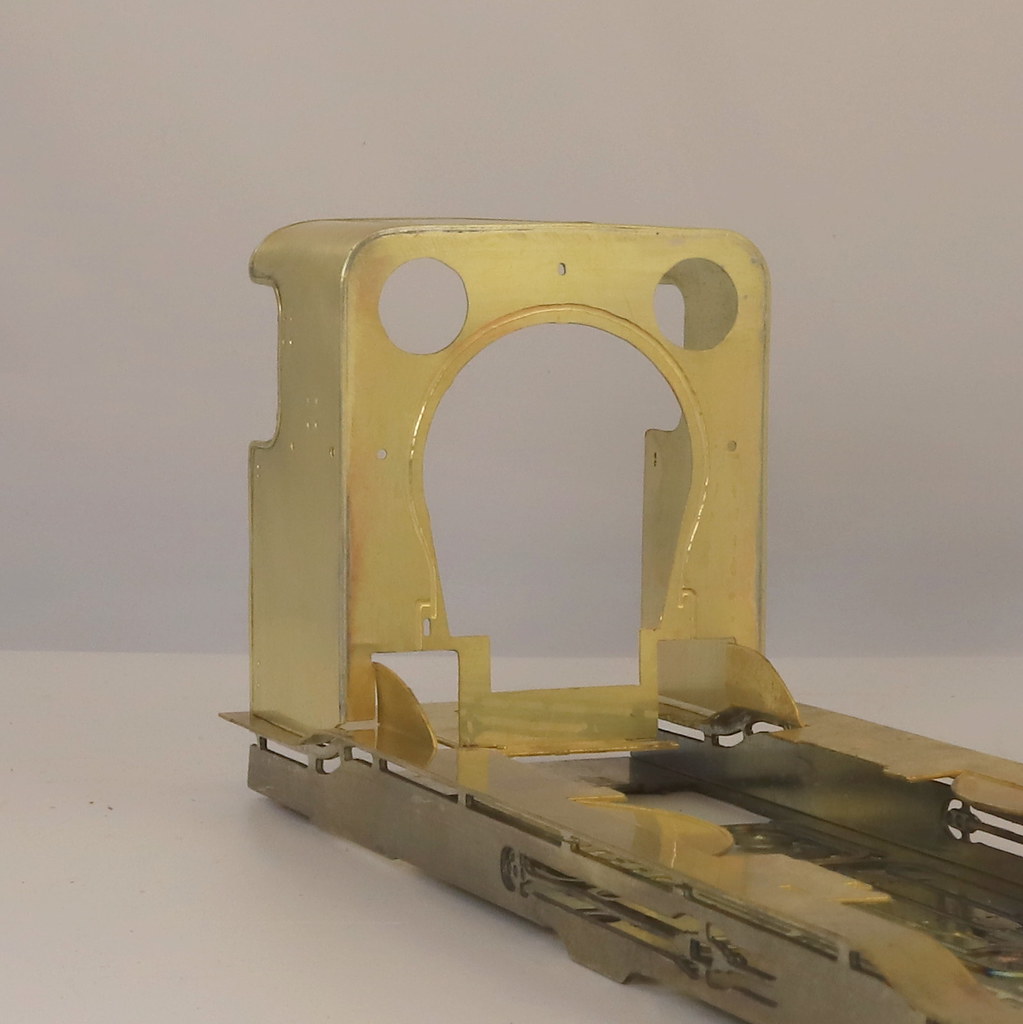 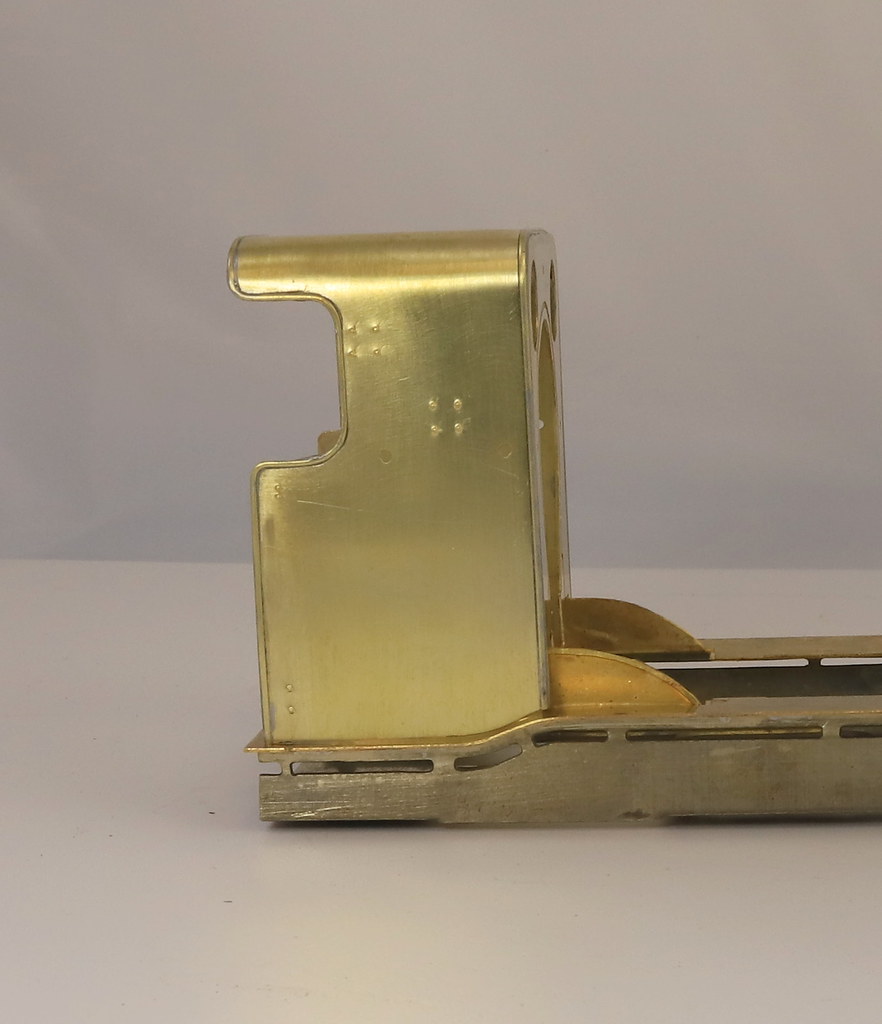 Not much to show for two evenings work, but I have completed the sandboxes.

I did the same as Tony and removed the fold over top plate to shape and fit as a separate item. I didn't have any brass channel to replace the front section so I scored the back with an Olfa cutter and then folded it as designed.

The first one went together without much trouble but I had to have a couple of goes at the second one before I was happy with it. The fillers are the etches provided sat on a short section of brass tube which I squashed into an oval with some pliers.

I had posted an update of the J6 build over on the Guild forum and Malcolm Stelfox (GNR Guru) kindly pointed out that all GNR engines had beading on the inside of the cab opening as well as the outside so last night's session was to add the internal beading. Oddly it only took an hour to ad the beading with the cab made up and I am sure it took longer than that to add it to the outside while the cab was flat. 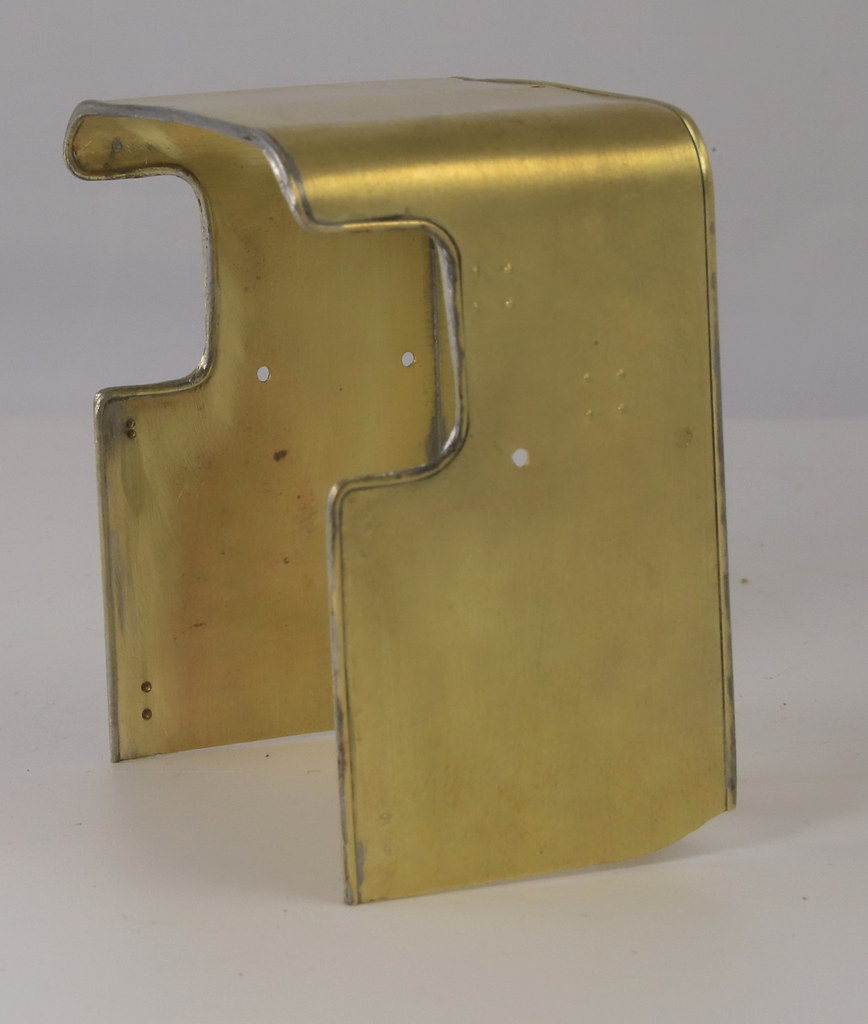 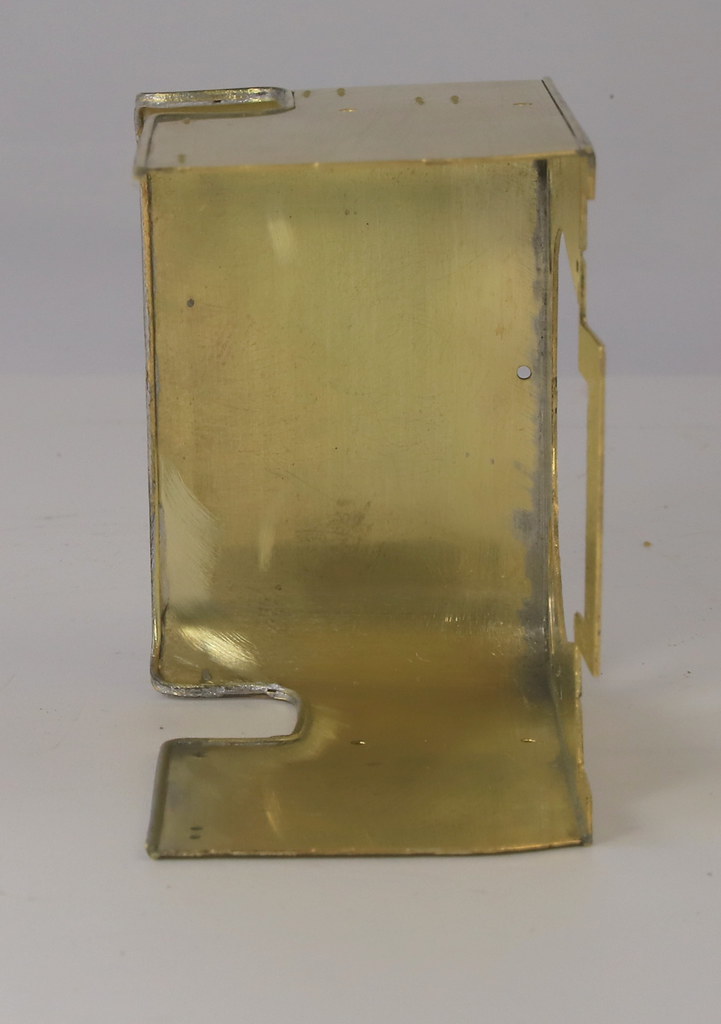 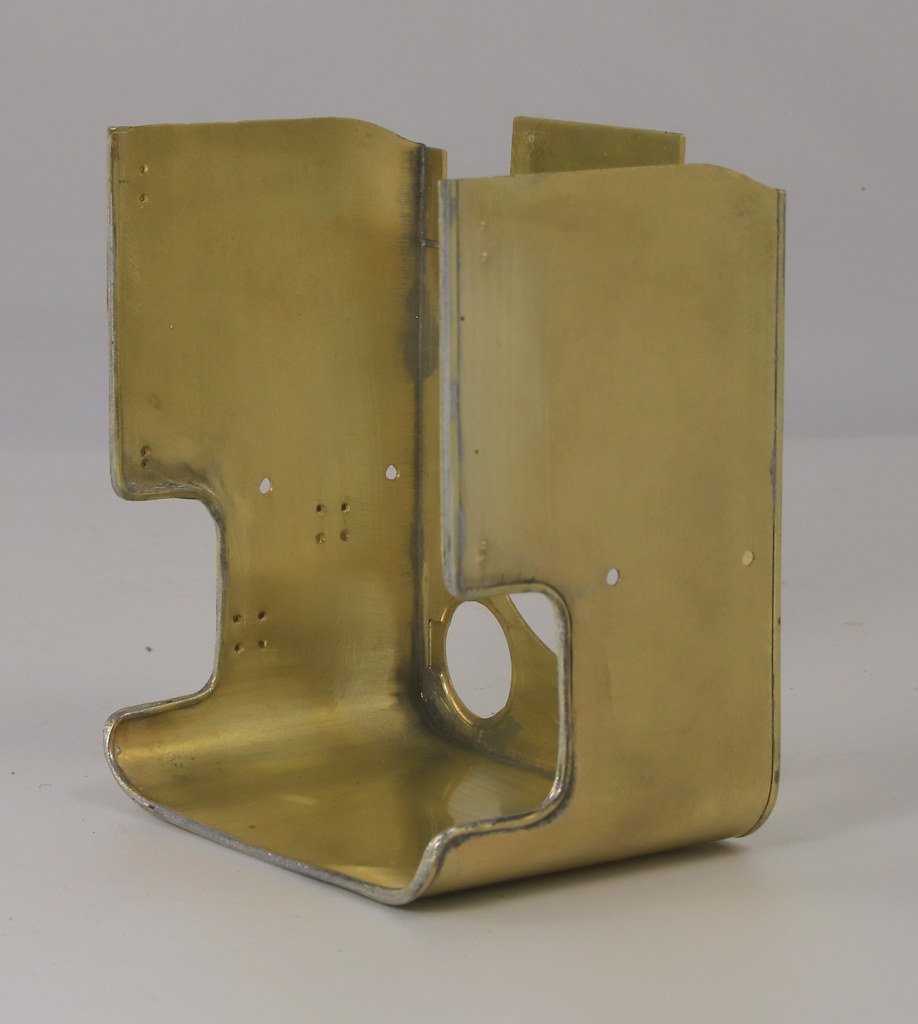 looks good as usual Rob,
but I am not sure I agree totally with Malcolm Stelfox about internal beading.

I think on many Stirling locos it existed, but for instance in the cab of the J52 in preservation, it is only
a rivet backing strip, and certainly neither of the two Atlantics seem to have half round beading internally.

I have looked to see in a lot of personal photos, plus some books like John Crawley's GNR in Focus, plus YEadon,
and photo evidence is pretty rare. The drawings I have also do not really show it, what I see is the angle iron around
the front inside of the cab, rather than beading.

I am happy to concede that such a beading might well have been at the trailing lip of the roof profile, but really
not sure about half round on the uprights.

This is where we really learn about the lack of proper evidence from photos.

None the less the work and the idea are great. Thanks for sharing your moving forward as you learn that retirement
doesn't give you more time it seems to be less!!!!!!!

Having checked my last set of photos of No 1 at Shildon, before the new tender was added, it certainly does not have
any beading on the inside of the cab.

I have just been looking at my photos of 251 at Shildon and to be fair that does appear to have internal beading but it may just be the light shining on the gloss paint.

The internal beading suggestion was also offered by another gent on RM Web called Dave Lester but what he is basing the suggestion on I am not sure.
I have to admit I do like the look of it so it's staying on this loco at least. Whether I add it to other GNR locos in my kit stash I don't know (J52, C1. N2). That said the C1 will be built as 4419 with the Gresley cab so I don't need to worry about it on that one at least.
Last edited by Robpulham on Tue Oct 13, 2020 5:25 pm, edited 1 time in total.
Regards,
Rob
http://www.railway-models-and-art.co.uk
http://www.flickr.com/photos/robpulham/
Top

Rob, I agree it makes things interesting.
As for the J52, which is preserved, that certainly has flat strips inside which show on that loco, the rivets.

I must also confess that some photos of beading from the rear give the impression of it being somewhat L shaped,
so like you, I am not totally convinced one way or the other.

I think the difficult things is when people make the pedantic statement that it was on every loco, when we certainly
do not have the proof.

Hello,
Slightly related to last few posts about beading, I wonder if there is an answer to this question.
On the Stirling and Ivatt and earlier GNR engines, how was the roof attached to the spectacle plate?
I assume that the overall roof and cab sides was a single sheet of stamped metal.

I am never unhappy to admit I could be wrong, not least because I have never worked with a pre Grouping
Doncaster build locomotive in such a way that I would have previously noticed this feature. When I photographed
No 1 up close, and took a number of cab studies, and didn't ever notice the internal beading.

I have talked to a couple of people who have greater knowledge than me, and both think it is possible for the following
reasons.
1/ All beading was used to strengthen the edges of unsupported metal, and the likelihood of backing plate to hold the
rivets which were certainly used, so then the question is whether this was flat strip or half round (d) shaped. One ex Doncaster
apprentice is quite sure the Plant would never have used flat strip, but like every body at the time just accepted what was there
rather than question and take any notice of. My photo of the J52 certainly to me seems to indicate a D shaped inner piece rather
than actually half round, and certainly the re-built late Stirling tender behind No 1 has D shaped beading on the coal rails,
and therein lies the rub, D strip is no longer available in the UK, so they had to restore it with a somewhat different size.

2/ Second person pointed out that in part such a thing would be used to cover sharp edges, although of course in the early
days the railways cared little about their staff, for instance consider the time it took Stirling to put toe plates behind
the steps on the rear of some of his locos. He is going to check out the York stock a little later in the month.

3/ As far as I can find the early GNR cabs were not made from one sheet, not least because initially steel plate production
was limited in length, because that is all they could roll in the early mills. Take for instance the J53-2 saddle tank conversions
or similar locos, they had a plate inserted and then flush riveted in place. On a D2 for instance there are some internal signs
which show where the sheets met. As for the Ivatt cab and roof that was at least 3 pieces, if not 5 because I do not think
Doncaster would have had the size of steam press to undertake this work, one reason for saying this is why are there so many
different dimensional sizes in Ivatt locos? We forget how good the railways became at closed flat rivets.

So Rob, I am not sure either way, but will come back to you at the end of the month if I have more accurate data.
Mind you it does look really good, and cleans up that untidy edge.
Paul
Top

Assuming I have got the sizes correct, I thought to add to my comments with 2 GNR locos on preservation and an NER one.

You can see the differences but also the flattish strip on the J52.

However, it is clear that the beading is much more substantial than most of us imagine.