It amazes me that no matter how many times I read the books relating to this class (Yeadon, RCTS, Harsnape, Morrison et al) I'm still finding new details and features, in some respects, i'm pleased it is such a small class, as the books have ended up with multiple pictures of each member, rather than one picture of each or less. No.69932 features a few times, and most of its detail features are documented.

I've now made the tank front steps, and the running plate grab rails 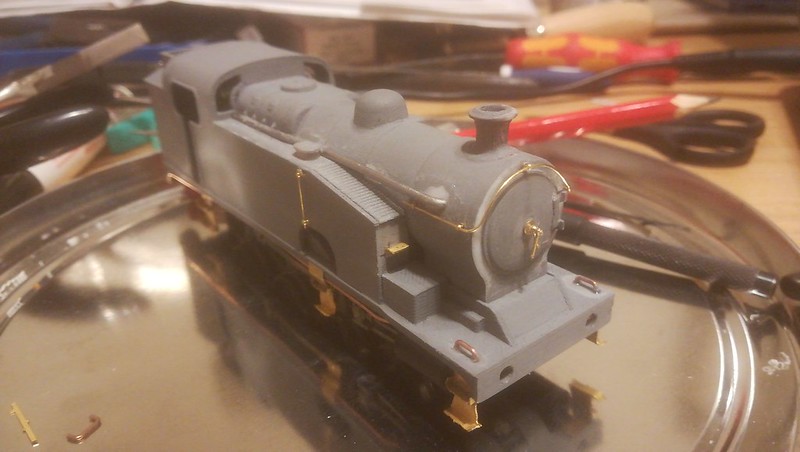 Both were turned out from scrap material left over from this project, I'm not sure if the "step-lets" can even be bought off the shelf, no matter though, they aren't exactly the most difficult part to make, and unlike the bunker step-lets, they aren't flared at each end.

I do still need to further detail the top surfaces of the tanks, and for those parts, I am mostly dependant on pictures of models (Richards', as well as a few others from Google), as pictures of the original loco's from a higher angle appear to be in absentia.
Lamp irons are the other item I need to tackle next, i've got some scrap brass I'll try out for making them, but if that goes wrong, I might well be on the search. The Comet models step kit has proved most useful for proving the brass needed to make all of these bits............

I use .45 mm brass wire flattened in pliers for lamp irons, but staples are as good as anything if you have some to hand.
Top

I can also recommend old solid-core copper wire, of various dimensions. 'Layout wire' hammers out quite nicely for such as lamp irons. Copper is malleable and nice to work with, and if it's coming from scrap one can afford to experiment.
Top

Thank you gents, that is most helpful. I'll fish out some copper wire and have a go.

A quick question, can you help me identify this item? 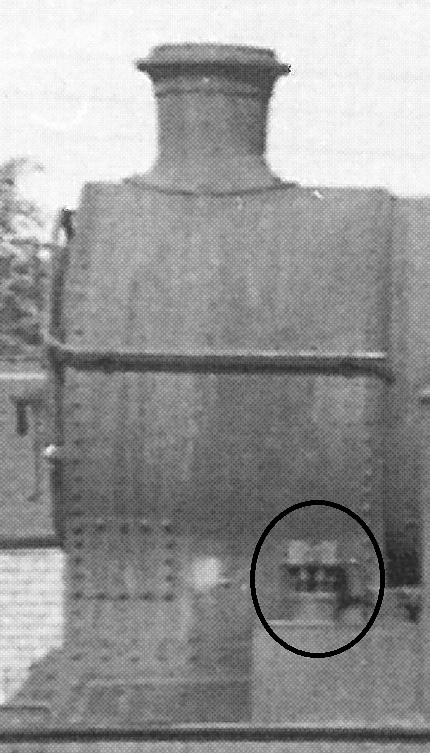 Lubricator, or control for sanding gear?

I looks like lubrication - possibly for the cylinders. Based on views in Yeadon Vol 20.

Agreed. Oil pots for the valves or cylinders.
Top

Thanks Guys, much appreciated.

there usually tends to be some form of lubricator in that general area, I was a little uncertain in case it was a device for controlling steam to operate sanders, but its quite small, and looks not dissimilar to the lubricators on one of my stationary engines. 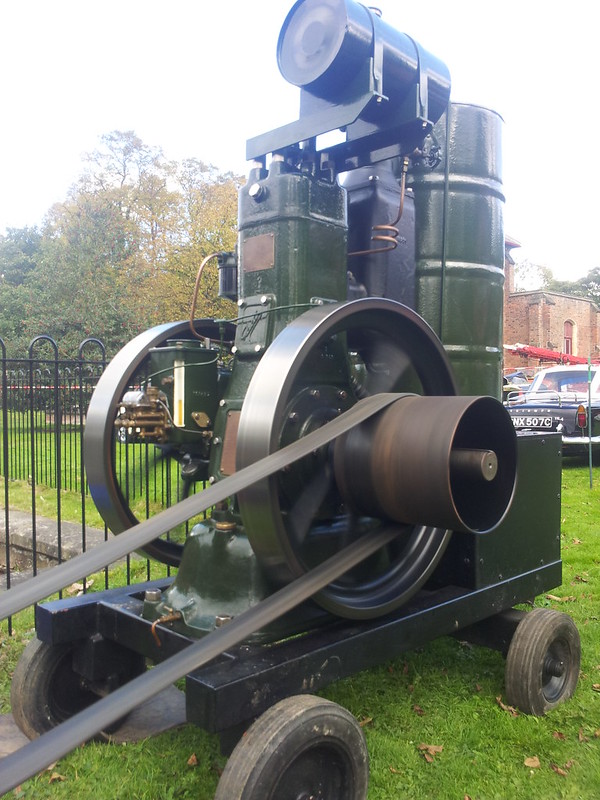 
I've had a go at the lamp irons, I think they have come out okay, but I may need a stronger adhesive than the superglue to make them more secure (they are "on", but slight pressure with pliers will dislocate them). I used araldite underneath the frames for the steps, but it was unsightly (not an issue in that location, as it cannot be seen), so needs to be something sparing. I might have a go with the Hy-sol, unless anyone has any other thoughts? its brass to plastic the bond. 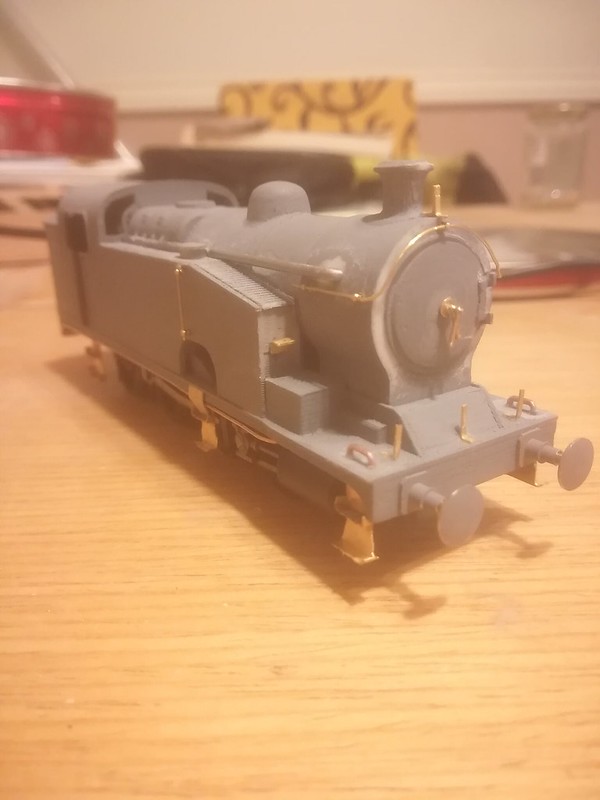 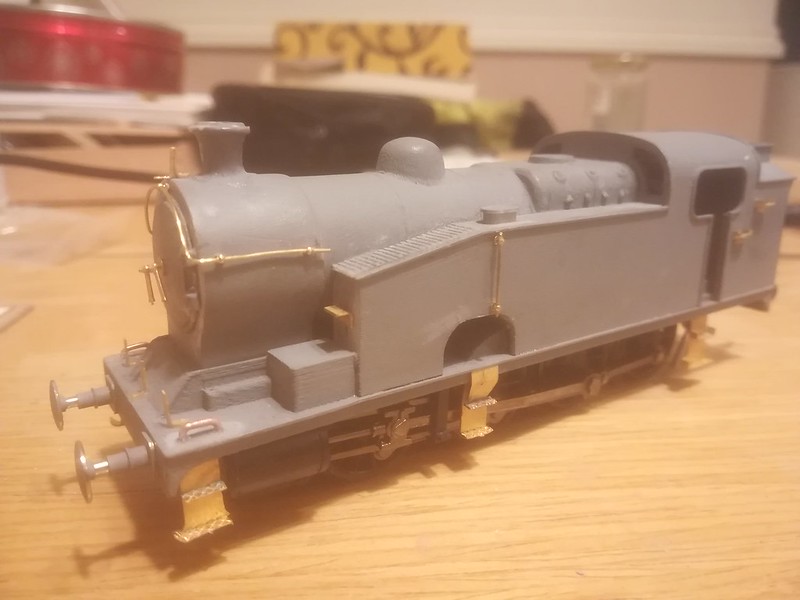 Lamp Irons , I always use staples much stronger , drill through the footplate and glue with superglue with the L bend underneath the footplate as here. This also show the much finer vacuum return pipe using 9mm brass I mentioned on a earlier post as well.

Thanks Mick, I may change the lamp irons to that format, though the smokebox one will probably be left alone. Certainly putting them through the running plate will allow the use of Araldite below.

A little more work this evening. I've fitted a modified Romford screw link coupling to the front, modified by virtue of shortening the drawbar internally. 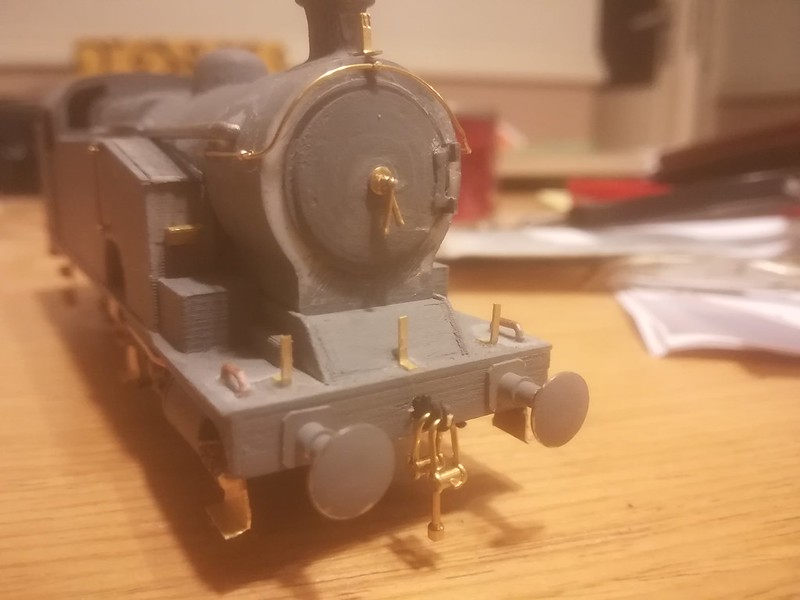 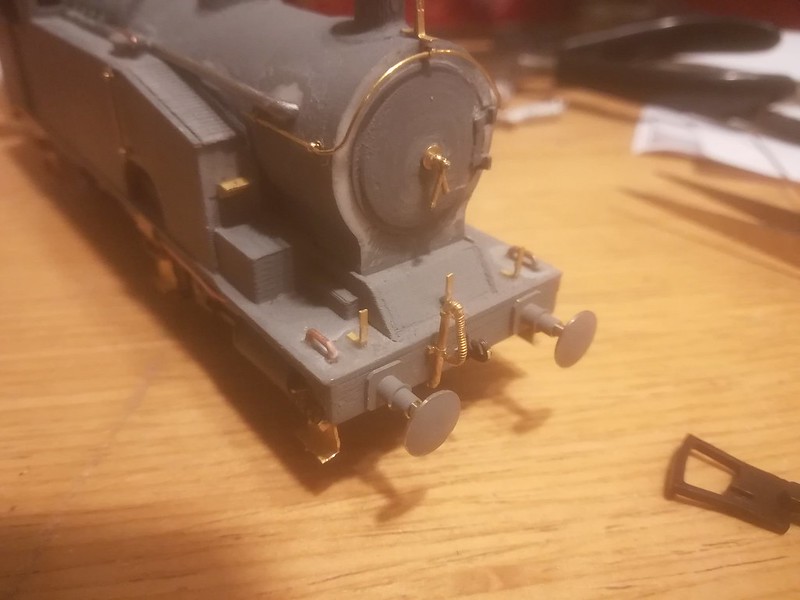 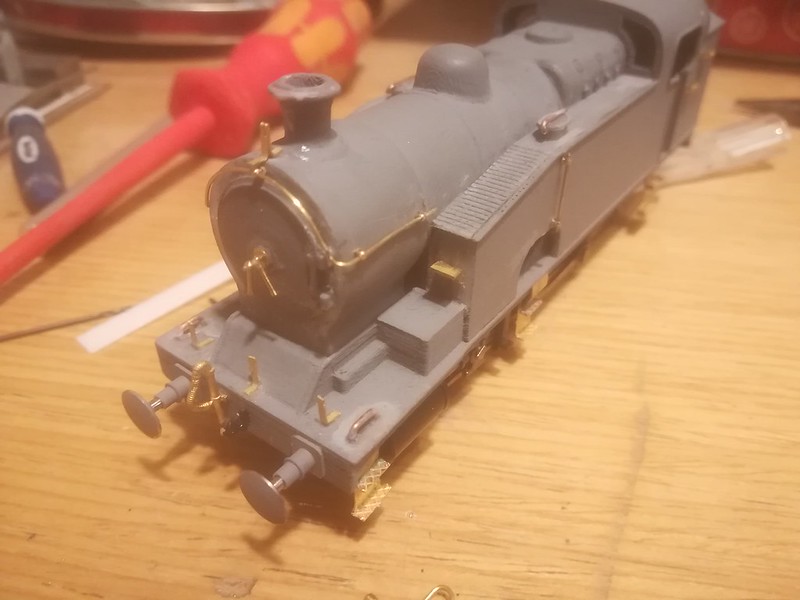 IMG_20190410_215245 by Paul Sterling, on Flickr
I haven't found a good clear picture of the Q1 tank filler caps, though they are likely to be similar to the J50 tanks that were pilfered to make the Q1. I've added some brass to simulate the locking mechanism, as its too fine to print. 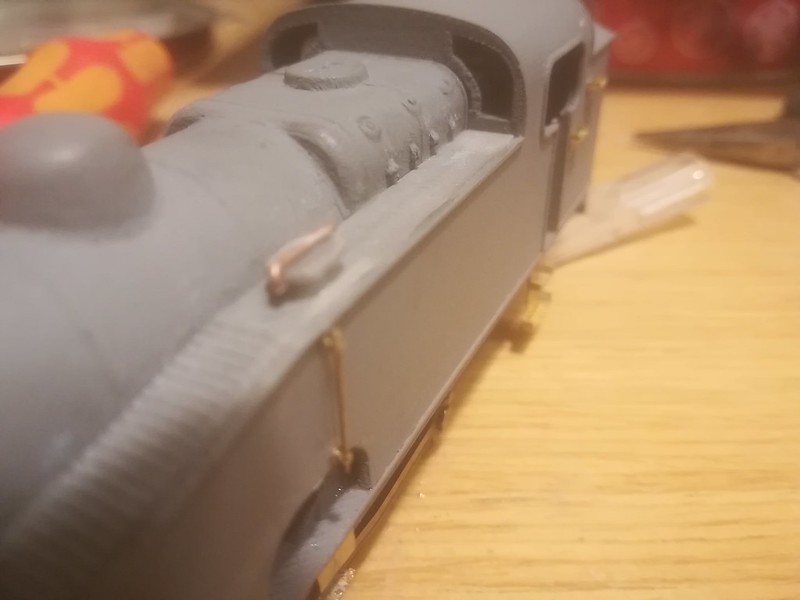 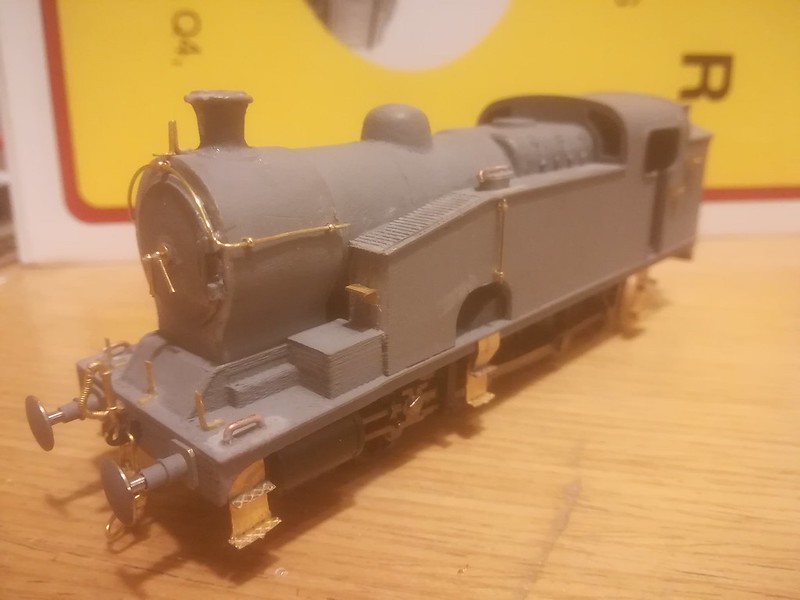 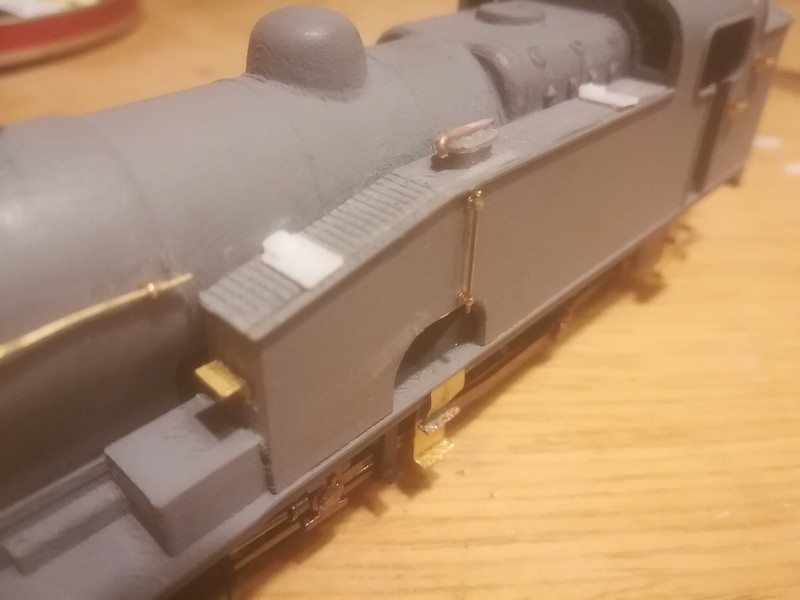 IMG_20190410_220537 by Paul Sterling, on Flickr
I am considering adding these tank mounts on too, which can just about be seen on some pictures of the originals, the thinner section would be blended into the tanks, leaving the mounting block visible. we'll see.

With my son under the weather today, I was able to slot in a little time on the loco whenever he was asleep, obviously no good working on the house at those points.....................

finishing off the front end detail was the order of the day. 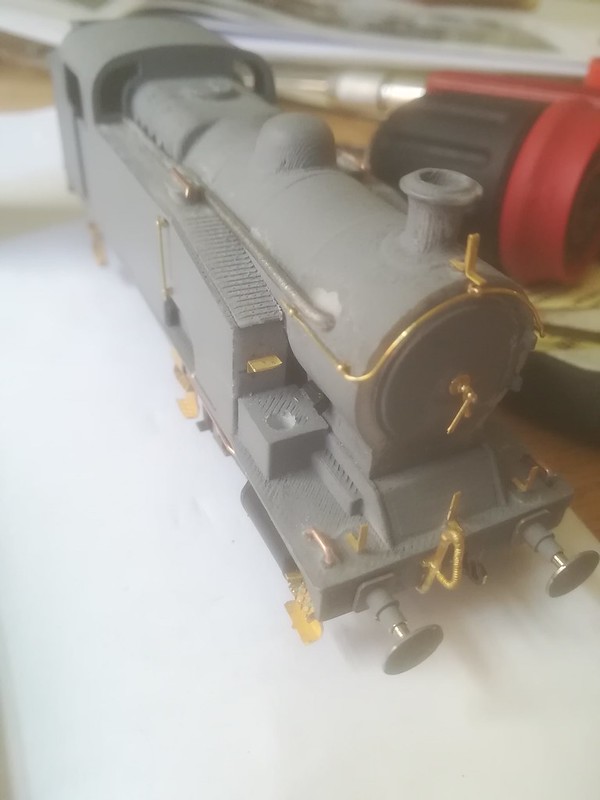 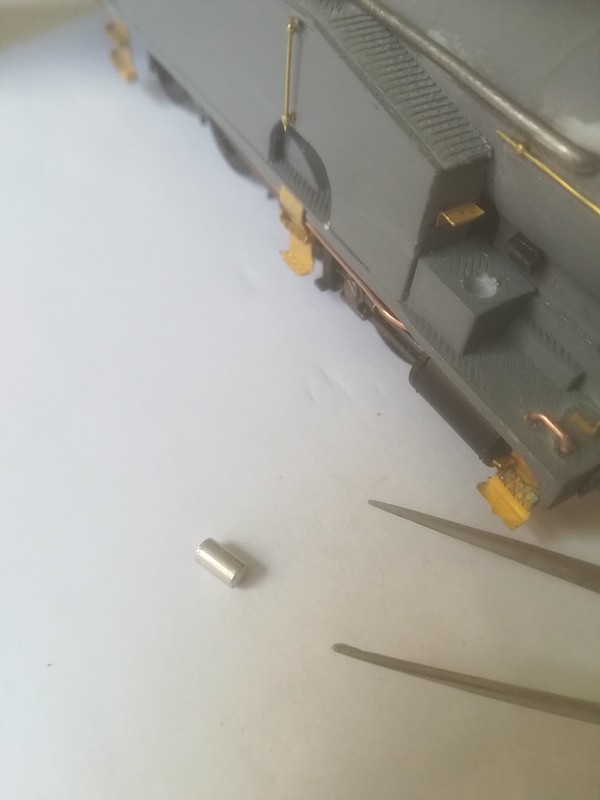 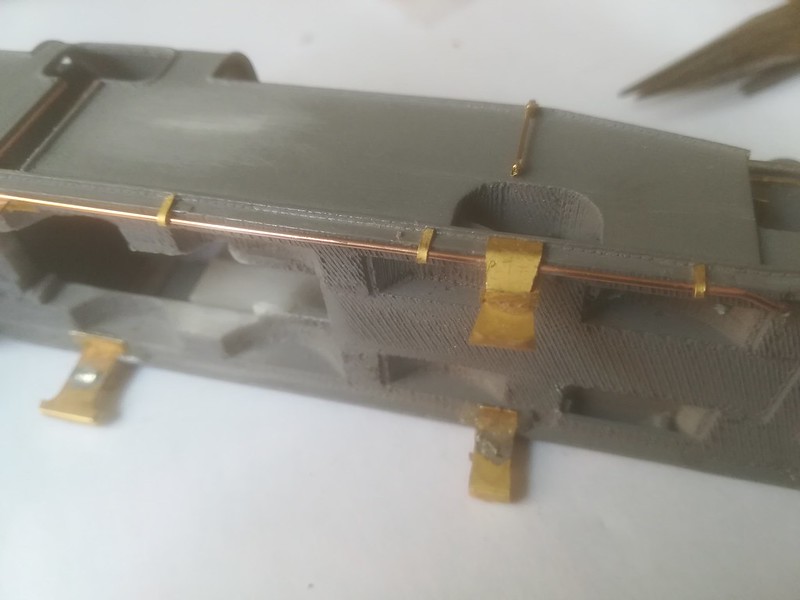 IMG_20190414_144817 by Paul Sterling, on Flickr
The vac pipe was in need of support brackets, as they are just too prominent on the original to forgo. a little ore of the sprue from the comet models steps came in handy again... 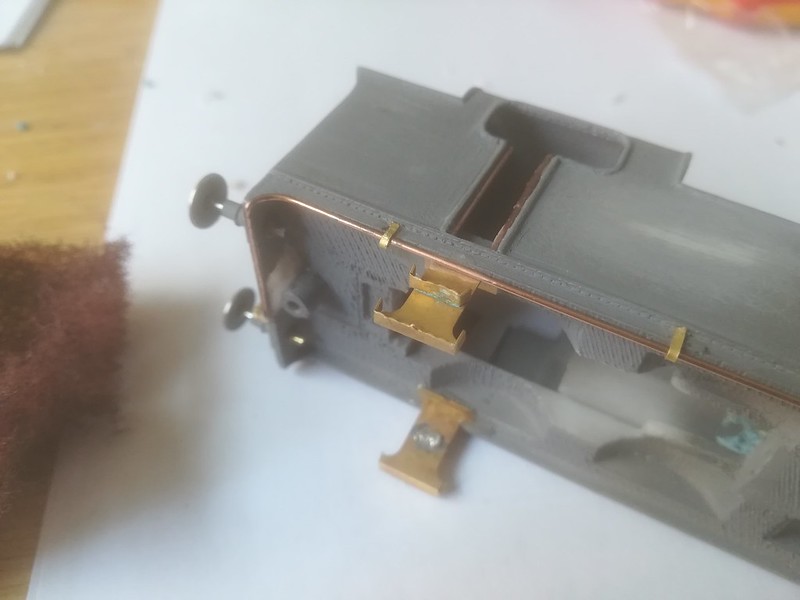 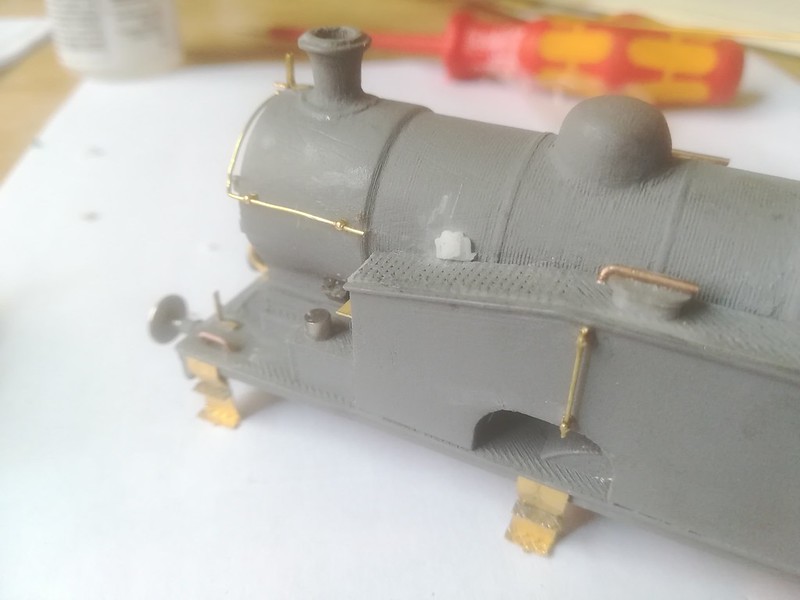 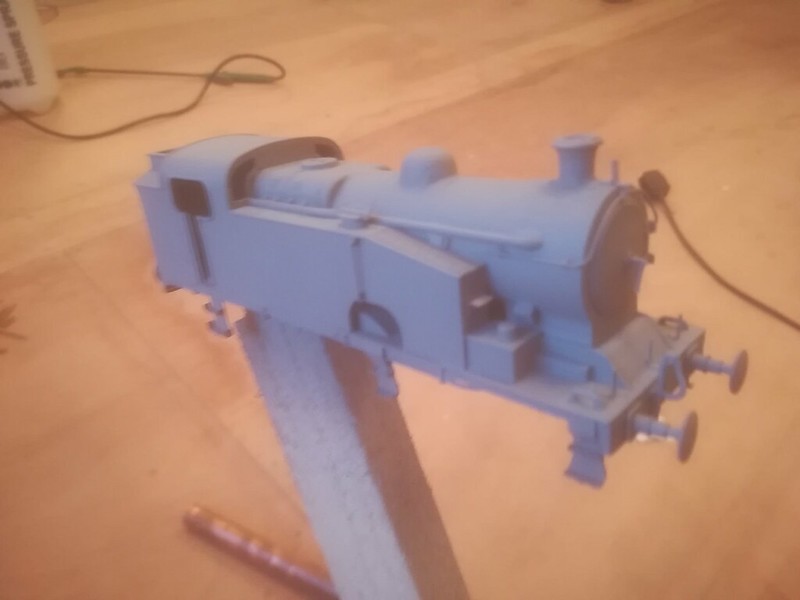 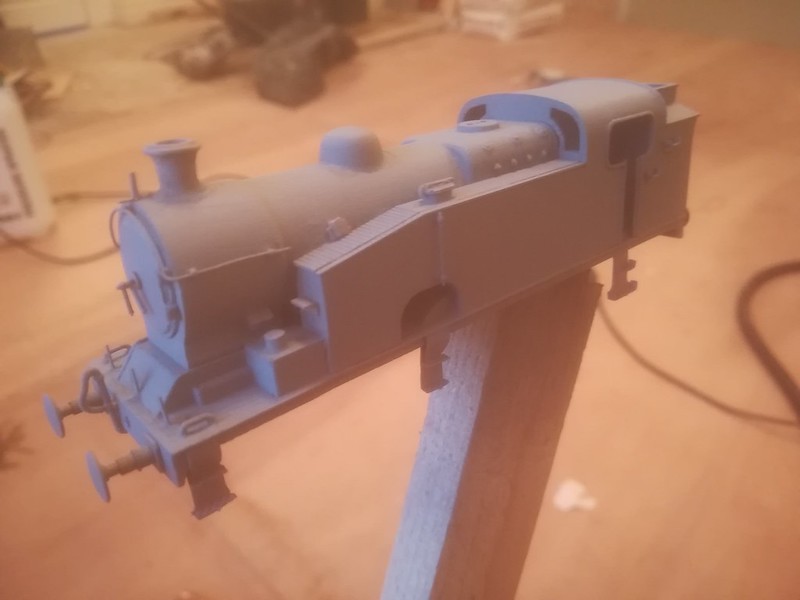 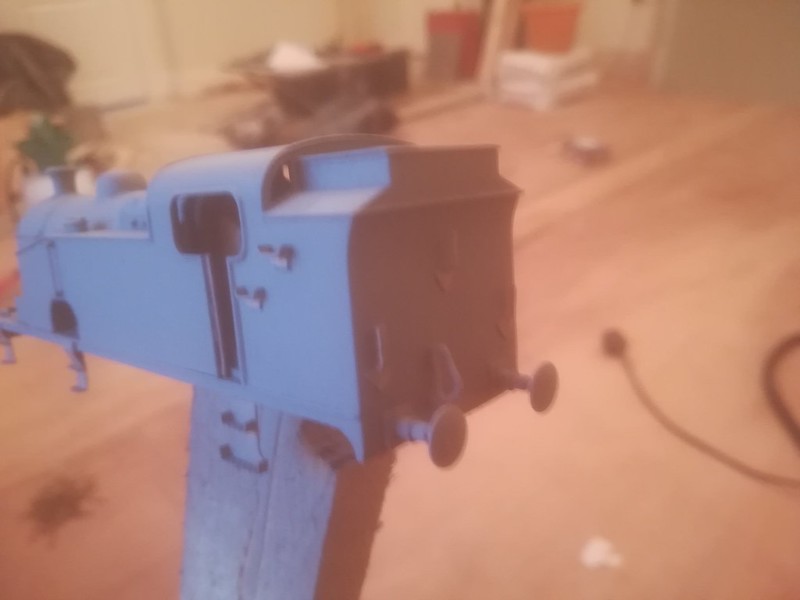 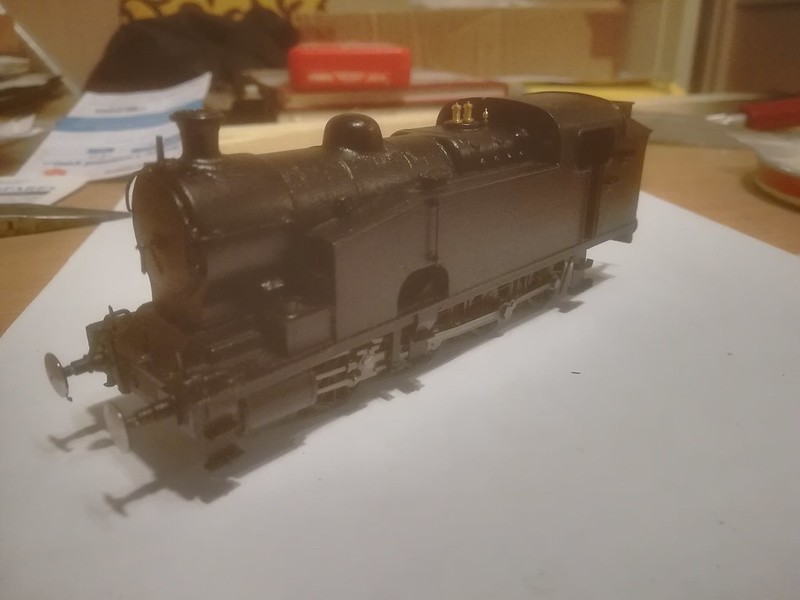 I've rubbed it down now, and put a coat of matt black on to improve the colouring/finish. It looks better, but unfortunately I'm hopeless with Cameras, and my Phone camera seems to be degrading with time, it was pin sharp with excellent colour definition when new, but after only 1 year, even with good lens care, it has become increasingly poor. A dedicated digital camera would be a significant improvement, but I'd scarcely do it justice, and in all honesty, I'd rather spend the money on my railway!


Turned out to be and interesting build, does it run nice and slow !