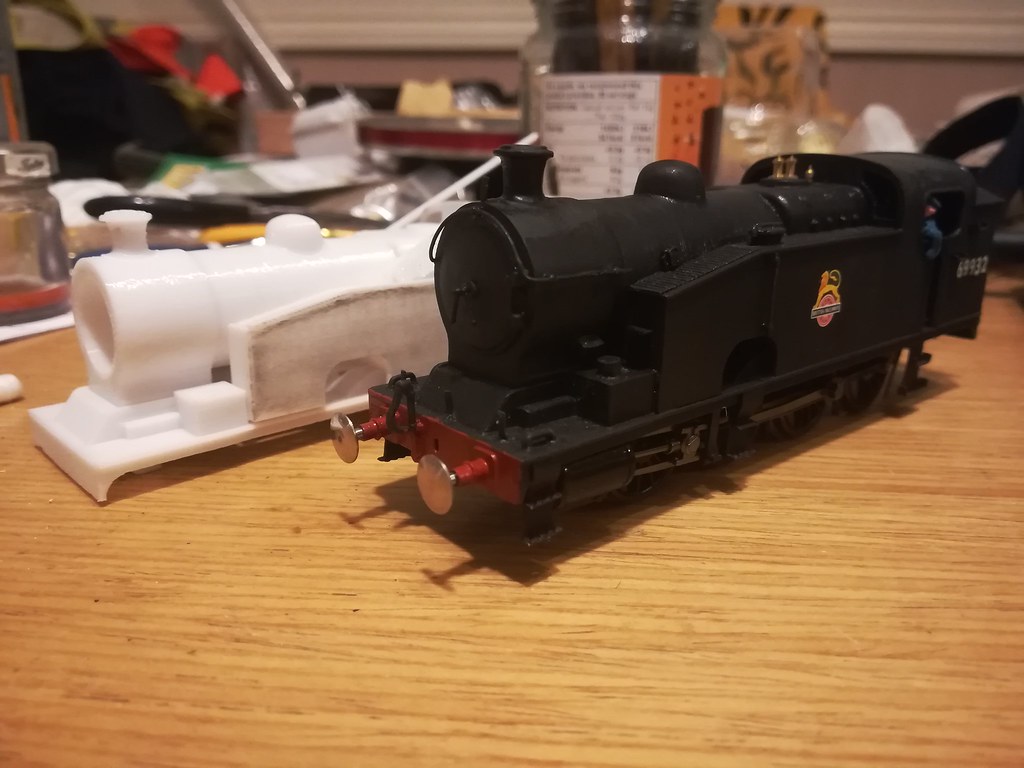 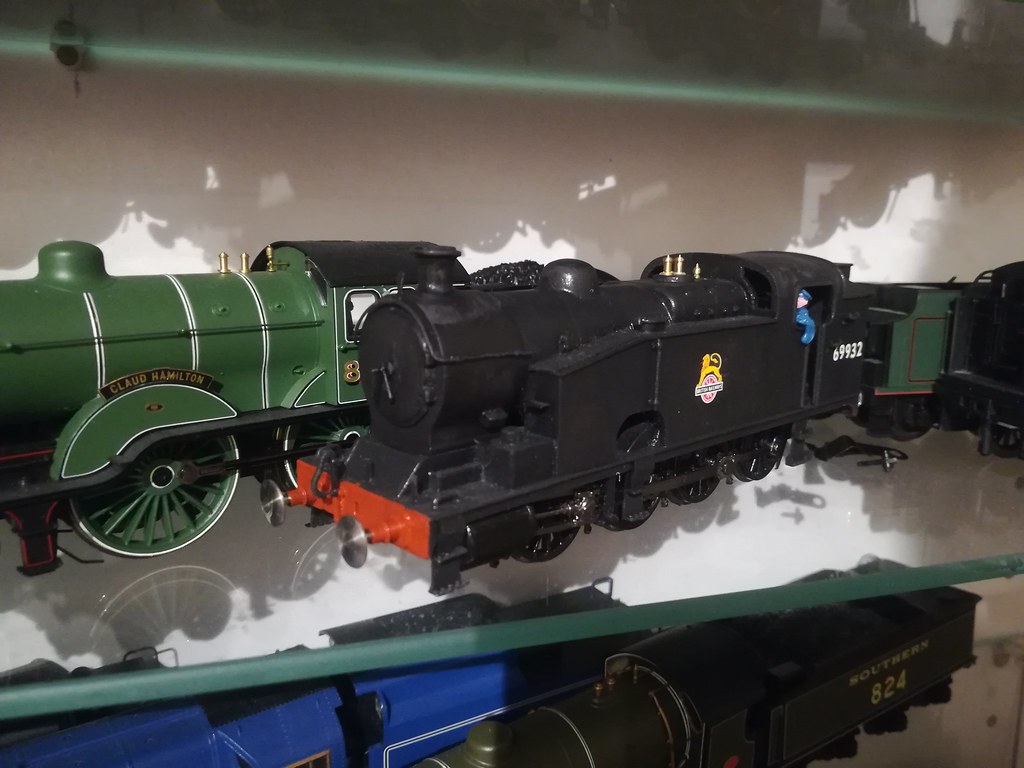 A little more smoke finish on the smokebox and that's the painting done, just waiting on the etched nameplates and smokebox number from Narrow planet now. the artwork came through this morning, so it shouldn't be long now.

One of the shells will be making its way to New Zealand today, so I can't wait to see what another modeller can do with the shell. I'm sure it'll put my efforts to shame!

I must admit, I found myself staring at the Q1 last night, in complete disbelief that I have managed to make a loco of my own, that does not look out of place alongside of my RTR fleet. I've put it off making one for so long, but with the exception of the varnish/transfers, I have really enjoyed the process, and I'm looking forward to making more!

I don't think you'll find anyone on this forum who'd claim to have the ability to put that model to shame, I'm happy to use your model as the benchmark for what it's supposed to look like.

You're too kind Paul, but thank you, and to everyone who has helped along the way!

I've found the m2 tap, so your loco will be on its way in a few hours time!
Cheers.
Paul.
Top

Is that idea still on? I thought the idea of repatriating the Aussie RODs had died a death. There's no prospect of them ever steaming at Dorrigo anyway - the place seems to be a scrapyard in all but name....!
Top

Is that idea still on? I thought the idea of repatriating the Aussie RODs had died a death. There's no prospect of them ever steaming at Dorrigo anyway - the place seems to be a scrapyard in all but name....!

I made the whole thing up

Seriously though, I know some discussion took place about one or more repatriations, but I don't think the idea progressed too far. Aus is becoming considerably more difficult to expat historic items from, irrespective of their original locations, and I don't think the ROD's would have as much public appeal as Pendennis Castle did, just my thoughts.

Nevertheless, with a 7 digit budget, I reckon one could be bought, I'd enjoy recreating a Q1 in the flesh, or even a 2 cylindered S1

Though on the whole, the build has gone well, there was two things which I regretted on the model. One was being able to effectively finish the boiler, which I should have done before final assembly, and the second more obvious one was the cab front.

The need to compromise the build orientation of the superstructure meant that the cab window frames were printed in a direction in which the layers crossed over a thin (therefore weak) area. on the two prototypes, both had window frame failures, and the finished one didn't only by virtue of additional clearance and thickness added, so not great really. Having the cab front as a homogeneous part of the main cab also meant glazing was nigh on impossible once the boiler was fitted.

So having pondered for a bit, I was at the stage where I was about to modify the last remaining prototypes, then it sold, so I've had a go a printing another. 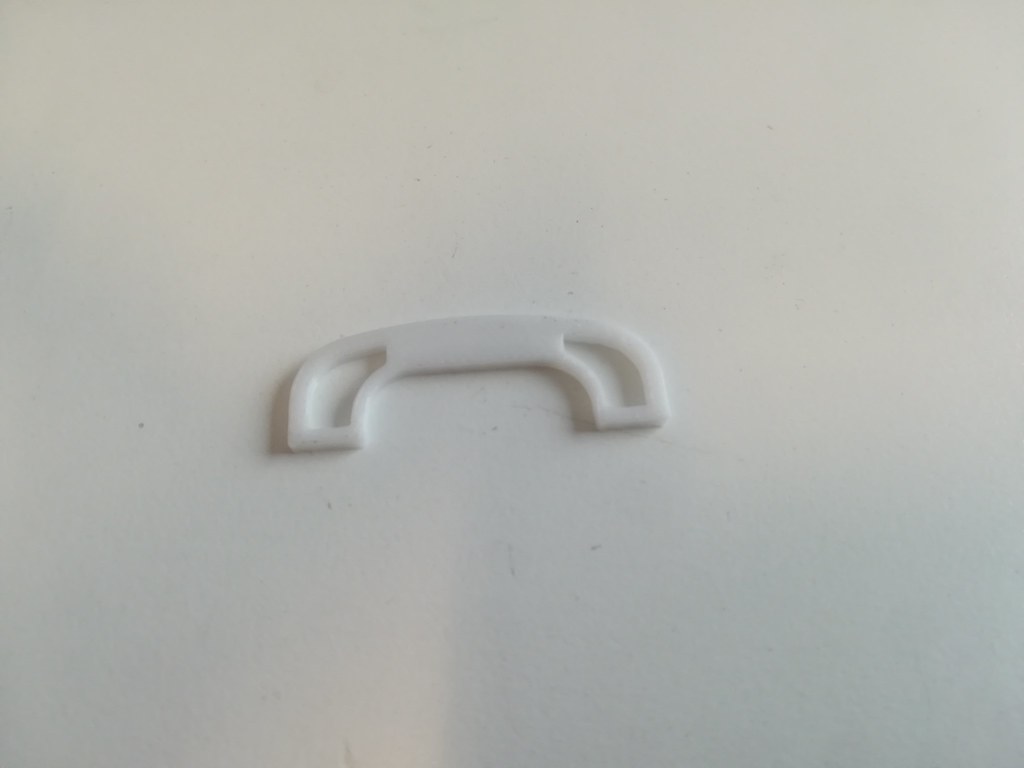 This time, I've removed the cab front from the main superstructure, so that it could be printed flat, thus giving smoother window profile, and more importantly, a singular layer all around the window, which gives strength too.

This would make the superstructure very weak for printing, as it is losing its key rigidity rib, so to restore the strength, the superstructure and the running plate were printed as one. This does make wash-out difficult, as the bunker is now enclosed, barring that small hole at the top where the lead ballast is added in (as seen on page 2 viewtopic.php?f=3&t=13150&start=15) so that will take a fair while to wash out the support material.

The other thing I am considering is leaving a rebate on the smokebox to allow for a strip of rivets,

I'd have to buy these first to get an idea of how much rebate was required.

Lastly this is probably going to still be 69932 again, but in its LNER days. Big Four liveries are popular on the preserved railways these days, so I'm hoping to have the engine reflect that, as either No.5959 or No.9932, the latter of which she did briefly appear in LNER green with black and white lining, though did not see service in that condition.

Paul, just wanted to say that you've done an absolutely stunning job with these. They look fantastic.
Top

Very kind of you Corbs, thank you once again.

Out of interest, does anyone know of a supplier of the LNER roundel/totem in OO gauge that was fitted on the bunker of the Q1 in LNER days, and is also the logo of this forum? I feel I have been searching for the wrong thing on google

A Robinson 8 coupled gathering took place at the weekend 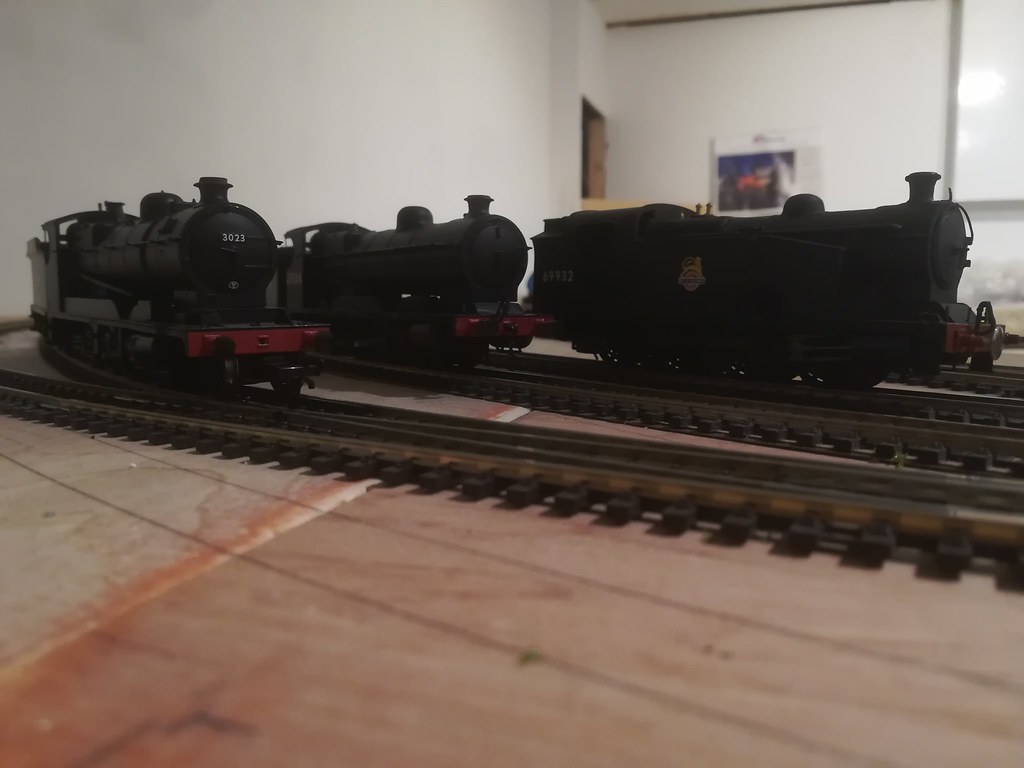 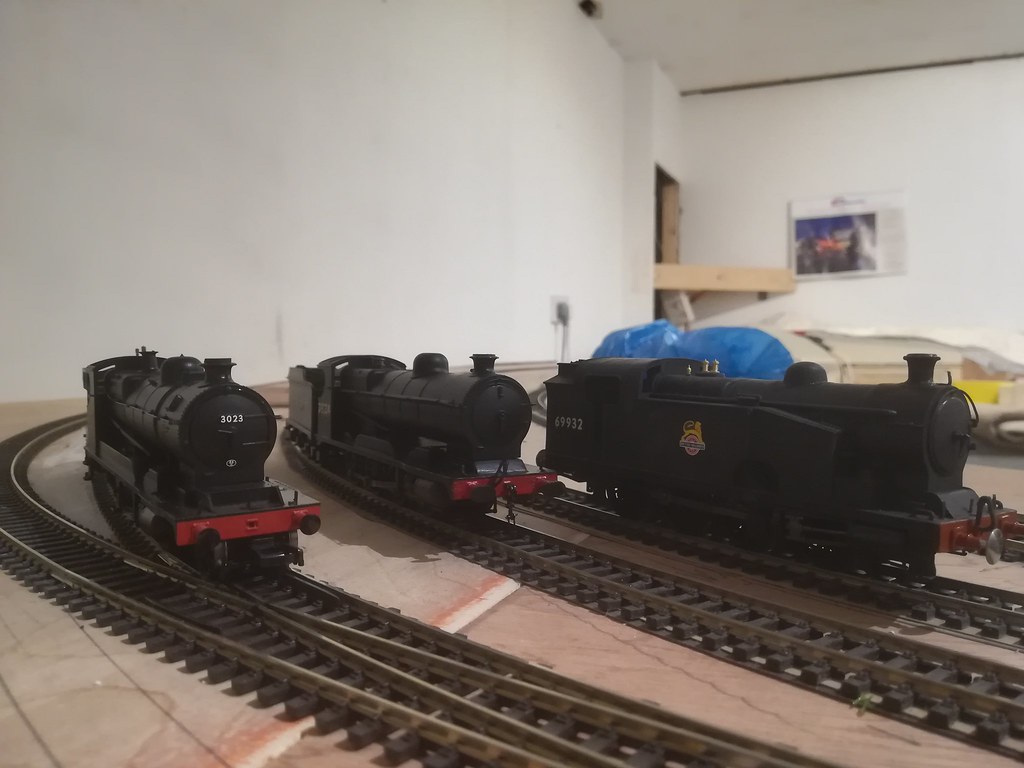 The ROD 2-8-0 is admittedly a donor for one of the future projects.

The very last parts of No.69932 arrived today, they've been on order for what feels like a lifetime.

Bottom row, Railway exec number for LHJC No.29, its Kitson number, and its "Lambton Worm" headboard.

Once the smokebox door number, shedcode, and nameplate is fitted, this one is all sorted. I'll probably revisit things from time-to-time, but thats how it goes.
Paul.
Top 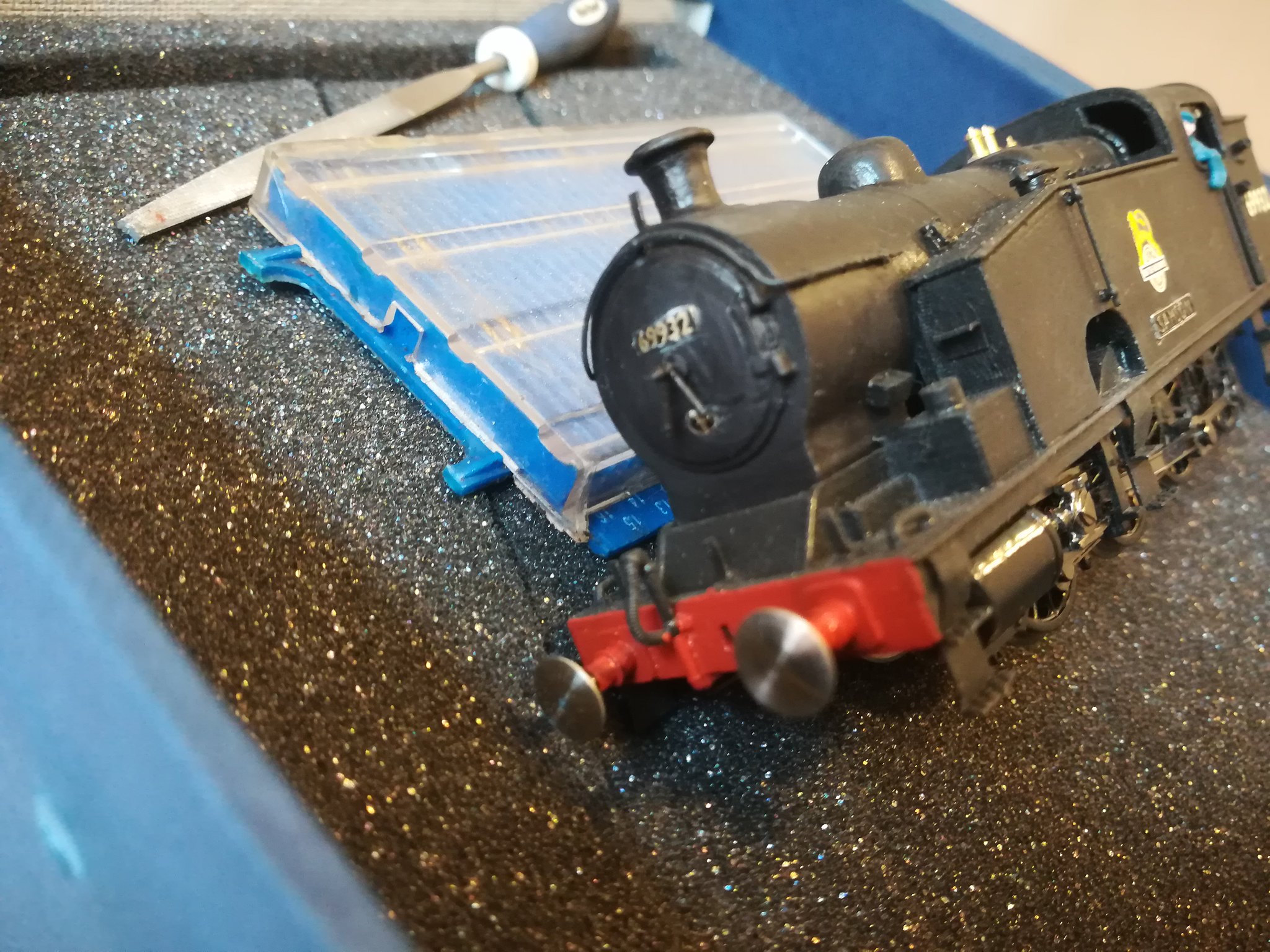 A truly horrid task (for me at least). and there needs to be a little paint to disguise the glue, but at least its on, 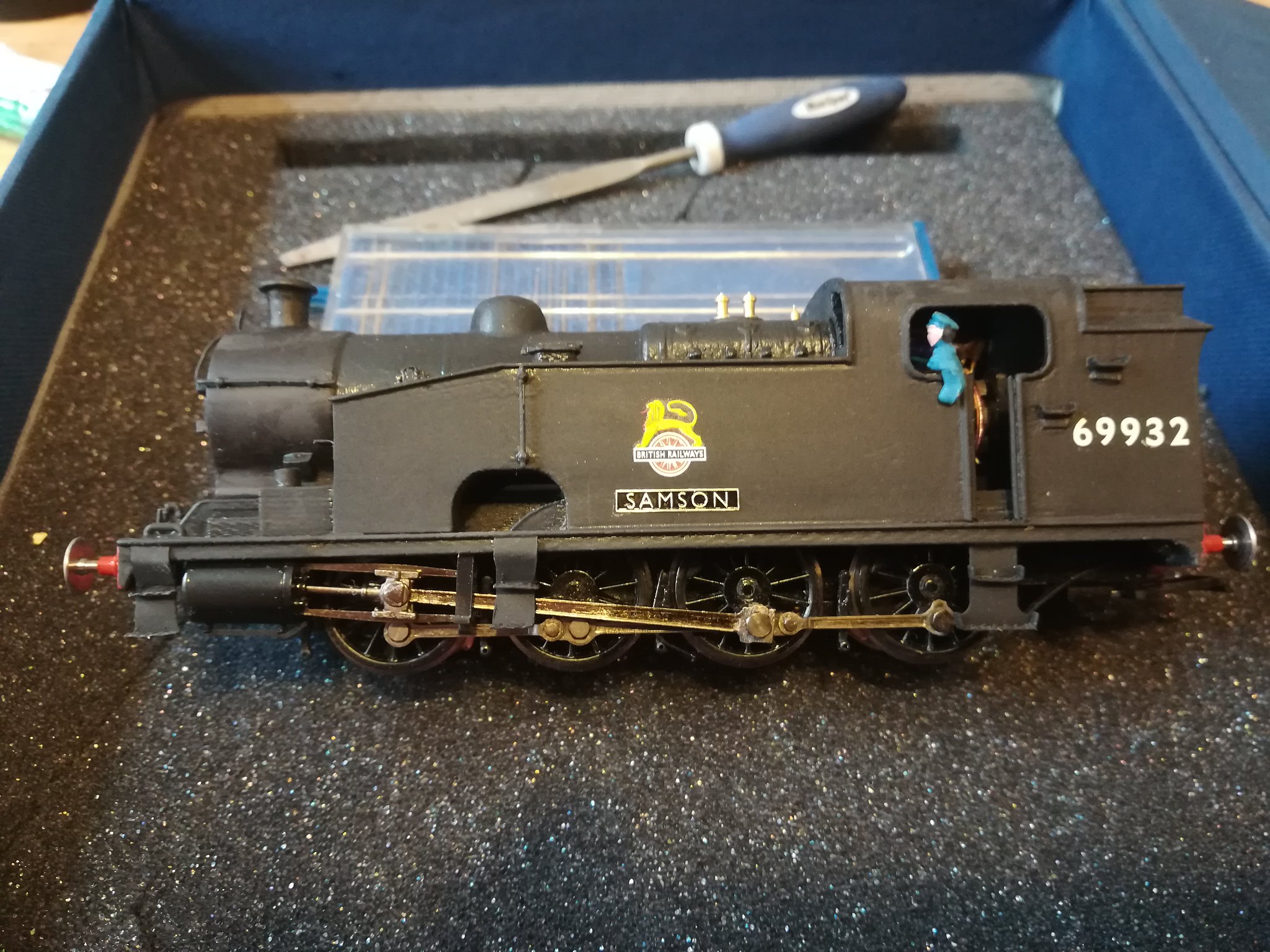 A friend of mine had a go at the original mule print towards weathering, and creating a pasrtially scrapped Q1, and this was the partway progress 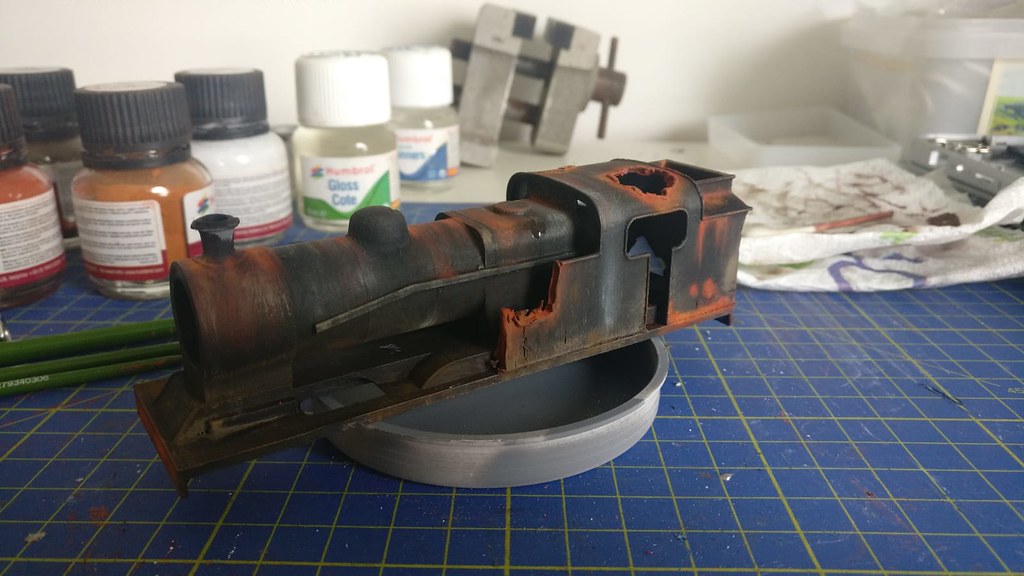 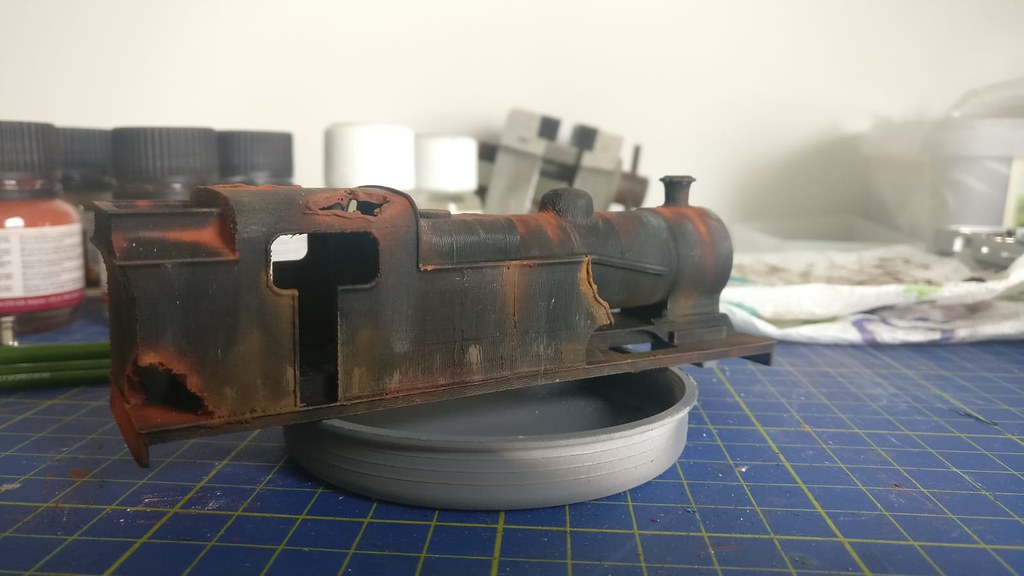 We may yet source an unpowered/duff Bachmann O4 chassis to go under it, and this might well take its place in the scrap/to restore line at the railway. Happily, I gather from NELPG that No.69932 never ever got into this state....................