The colour seems to be getting better.

I recall No. 29 being lighter but everyone's colour memory is notoriously bad.

I have seen that darker 'mossy' colour on a model before - I had a Union Mills B12 that was that sort of colour. Too dark imho.

Might be a sucking-eggs comment, but also use daylight lamps when comparing colours and painting. (thankfully with CFLs and LEDs, daylight lamps with standard fittings are easy to find, or they are here in the US)

(if it helps, for my 7mm Y7 I used the Phoenix Darlington Green with a dab of yellow to lighten it)
Richard Marsden
LNER Encyclopedia
Top

I recall No. 29 being lighter but everyone's colour memory is notoriously bad.

I have seen that darker 'mossy' colour on a model before - I had a Union Mills B12 that was that sort of colour. Too dark imho.

Might be a sucking-eggs comment, but also use daylight lamps when comparing colours and painting. (thankfully with CFLs and LEDs, daylight lamps with standard fittings are easy to find, or they are here in the US)

(if it helps, for my 7mm Y7 I used the Phoenix Darlington Green with a dab of yellow to lighten it)

I've never heard of Daylight lamps before, I shall look into it, as I can see the reason, the light No.29 sits under has a HUGE difference on the appeared colour. I'm inclined to agree from the feedback that Phoenix paints are the ones to use, once I'm set up for spraying, that's the way i'm going to go with this, as I can adjust the paint slightly if need be.

As a slight aside, I've been commissioned (sort of) to make a fit in cab for the Hornby Austerity, to recreate LH&JC No.60. As the Hornby Mouldings are quite chunky on this model, printing shouldn't be too challenging.

Of course, even if you succeed in obtaining a "daylight" lamp that genuinely conforms rigorously to a version of daylight, the colour rendering in that illumination won't guarantee that apparently matched colours will still match in other lights, and you face the problem that daylight itself isn't of fixed composition. If you really want to start delving into the complications you could begin with this:
https://www.sciencedirect.com/topics/en ... illuminant

Alternatively, just try to relax about the question of "correct colour".
Most subjects, models and techniques covered in this thread are now listed in various categories on page1

Well yes, there's a potential rabbit hole there, but 'regular' daylight lamps are probably sufficient - definitely better than the yellowish lamps that most household lamps are (ie. to look like classic incandescents), and you should probably be using daylight lamps for the layout to match...

I notice a lot of people photograph their models outside - and I've been known to do this; and when I was in the Tex-N club (N-scale NTRAK) it was amazing how much better the layout looked with natural sunlight in the atrium of the George (HW) Bush Presidential Library, compared to the usual artificially lit dingy exhibition halls.
Richard Marsden
LNER Encyclopedia
Top

When I did a lot of spraying I used "daylight" bulbs, and nowadays, I use a daylight bulb when drawing on the computer.

I have bought as modern one from Lidl which was a benchtop LED type at less than 30 QUid, works very well, and
makes continued computer use in winter a much more pleasant experience.

Interestingly, the only "old fashioned" type of bulbs that you can easily buy are daylight bulbs for old flexible type office
lamps, they are a reddish colour.
Whilst I understand the viewpoint of Graeme, if you use one standard type of light, then you will have a "standard" personal
view.

As has been said,colour is subjective, but at least if you have a basic line from which you can paint.

Thanks for all of the useful feedback gents, I'll will put it to good use.

In the meantime, I've done some extra parts, which are not to fit on No.29, but when time permits, and I print another frame, will be to recreate a one of the lost LH&JC Kitsons. 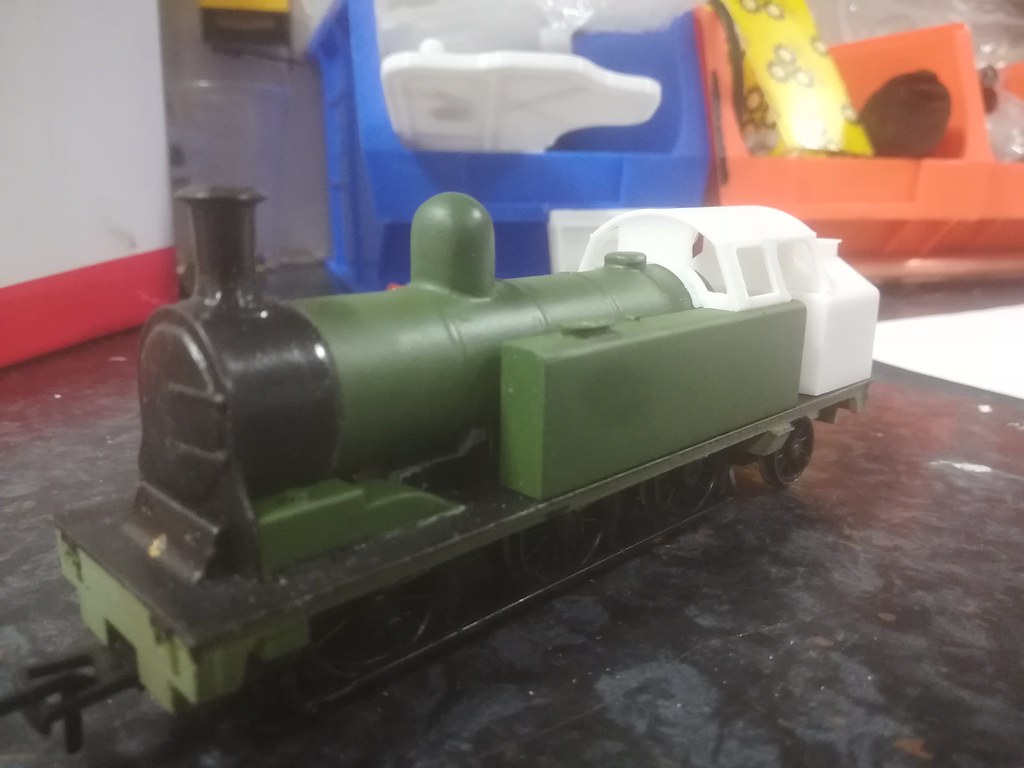 This is No.31. Of the Three Kitsons built for Lambton 1904-1907, they are basically the same, but not, so to speak. No.29 and No.30 was almost identical barring one having a twin handle smokebox door, No.30 having a handle and wheel, they also have different tube sizes. There may have been other changes, but difficult to identify from the small pics available. No.31 has the same basic dimensions, and has the tube sizes from No.30, but visually, it has a tapered-top, full-width bunker, and its cab was significantly different, looking more like it had been borrowed from a Sentinel DH or similar. The weight distribution was different, but I was kind of expecting the bigger bunker to bring the weight rearward, but the opposite is the case.

I've got a little closer to dealing with the signwriting on No.29. LNER typeface is similar (but not the same) as Gill Sans. The Gill sans shadowed typeface available as a downloadable add on for Microsoft Word gets you close to it, but the aspect ratio needs to be altered, even so, one or two letters would still need to be individually modified to get a visual representation of the LH&JC.

I did also receive, a very generous set of pictures from one of the Lambton Locomotives trust volunteers, who was involved with the painting of No.29, some head-on pics of the text, from which I was able to generate a set of edited letters, that would probably pass for No.29, the numericals, would just be standard early LNER for Green loco ones. as Per Fox transfers "FRH4309 - LNER Earlier Lettering/Numbering for green Locos". With this strip, I'm only short of HJC and a full stop anyway. 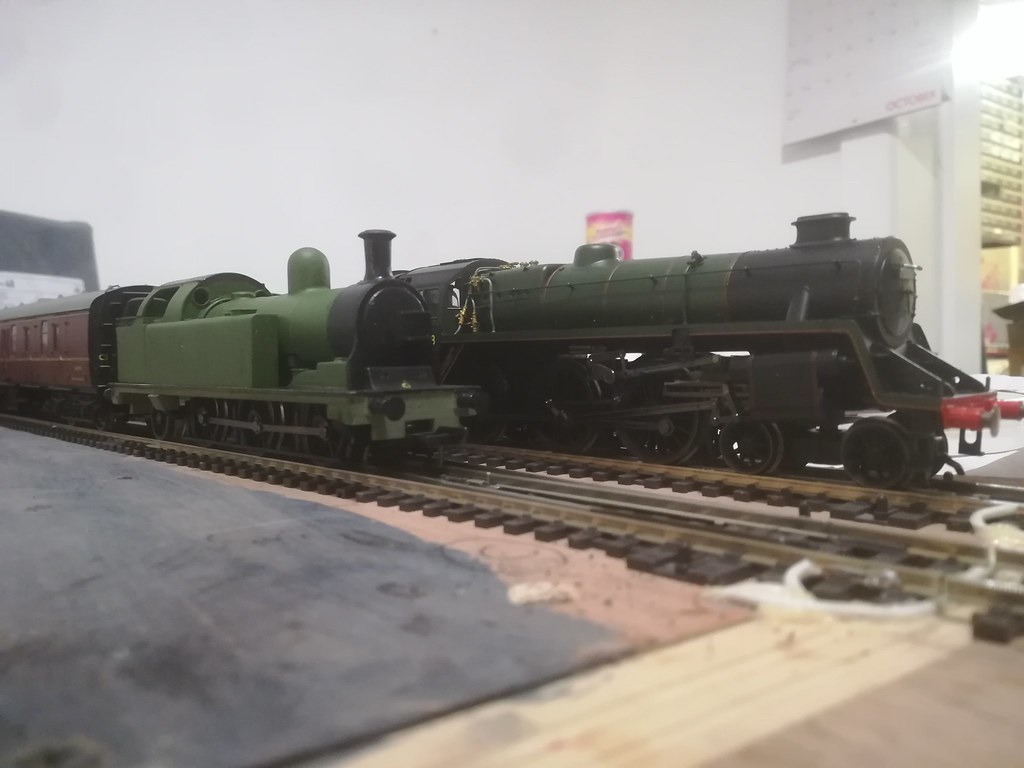 I recently got asked to produce another Lambton Colliery product, the cabs fitted to (some) Hunslet Austerity tanks based there. 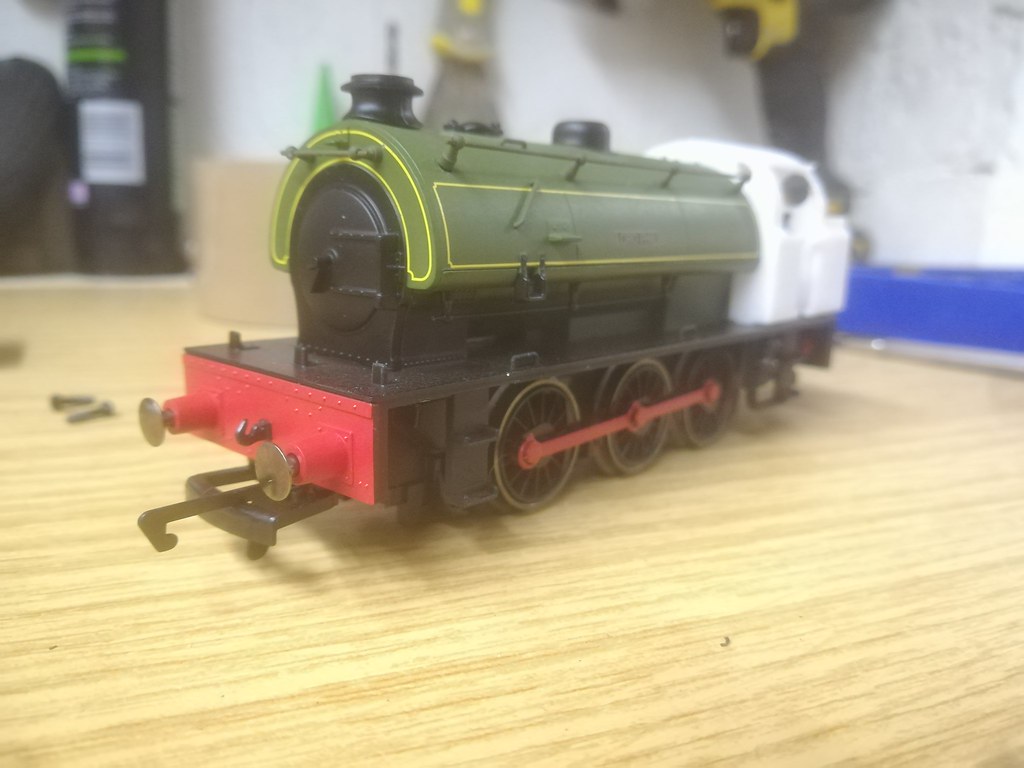 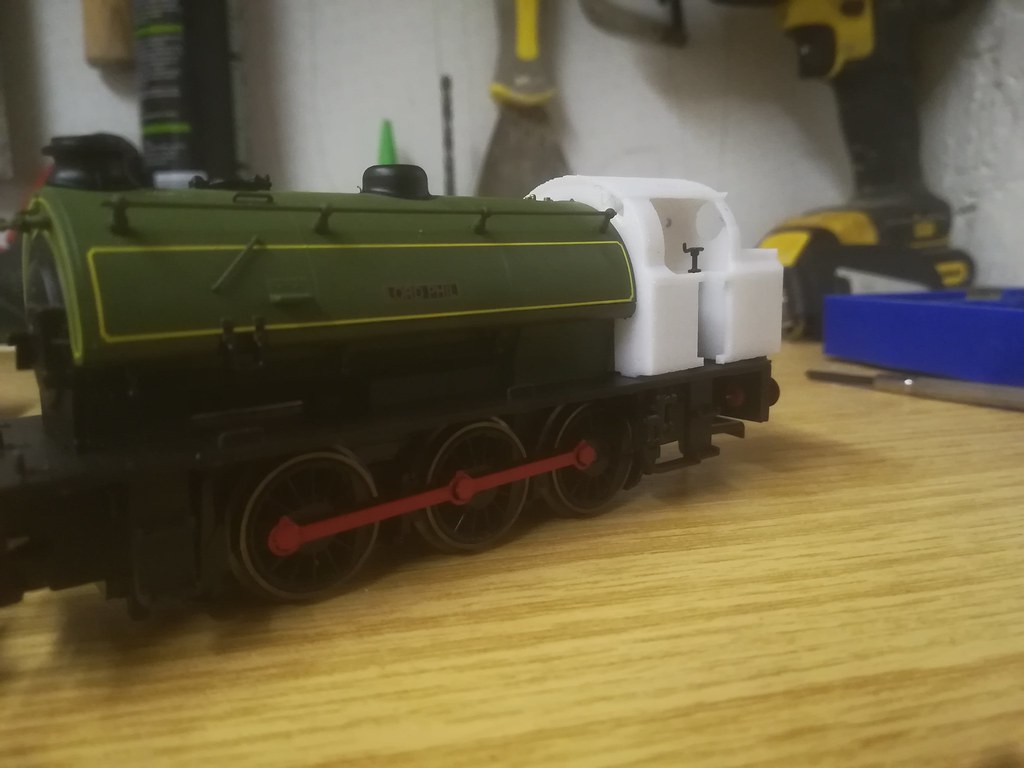 The prints weren't brilliant, so the purchaser now had the CAD, and will source a print elsewhere. My printer is having technical problems at the moment, which I am in the process of investigating, but if nothing else, these particular prints are a direct replacement for the Hornby Cab on the Austerity, to give a reasonable impression of the Lambton Cab. Obviously no dimensions for this one (though No.60 still exists), so it was done largely using the profile from No.29, as well as "scaled" pictures of the numerous engines modified with this cab.

A visit to the NYMR last week (see my new thread on this page) provided me with an opportunity too good to miss. 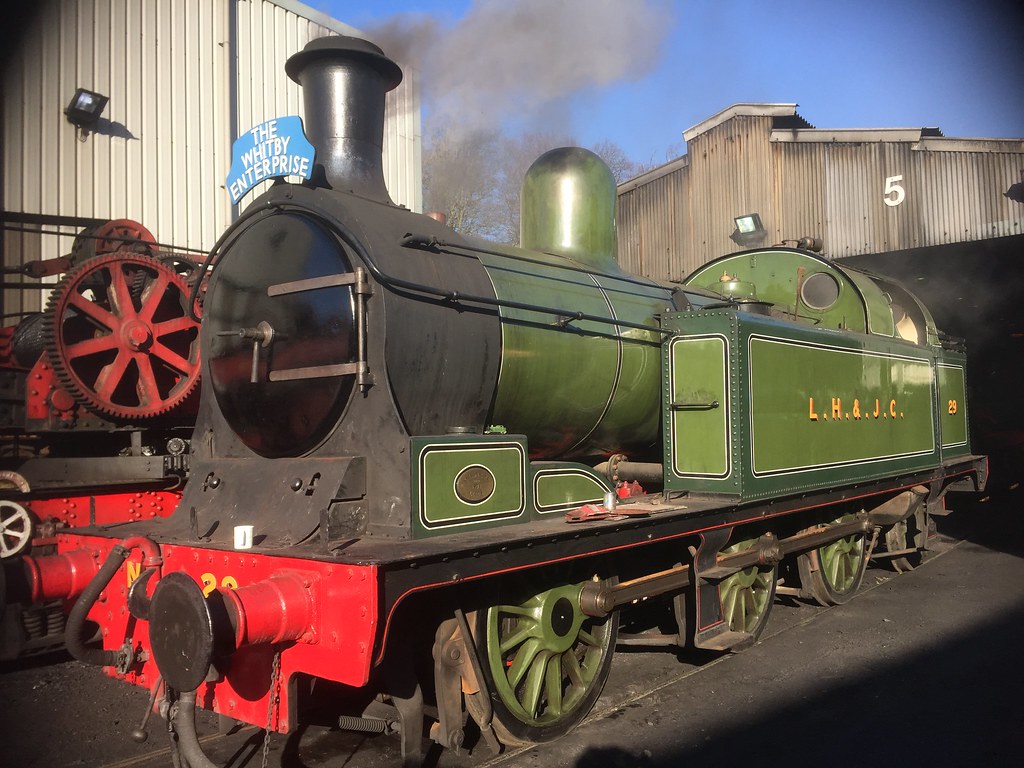 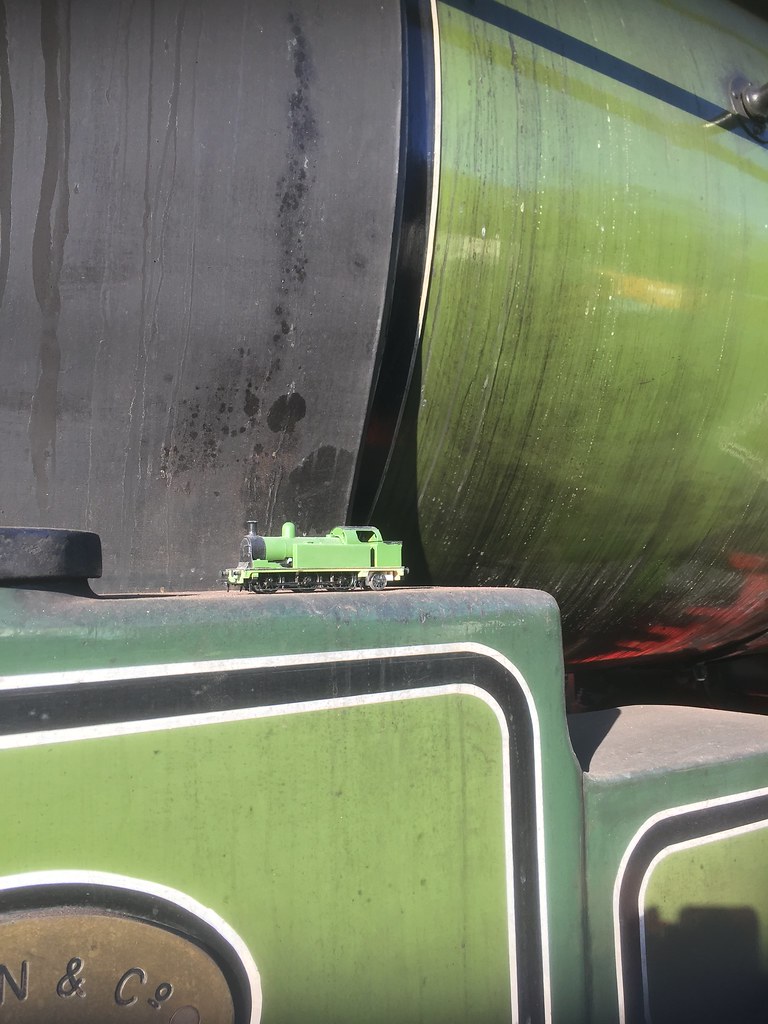 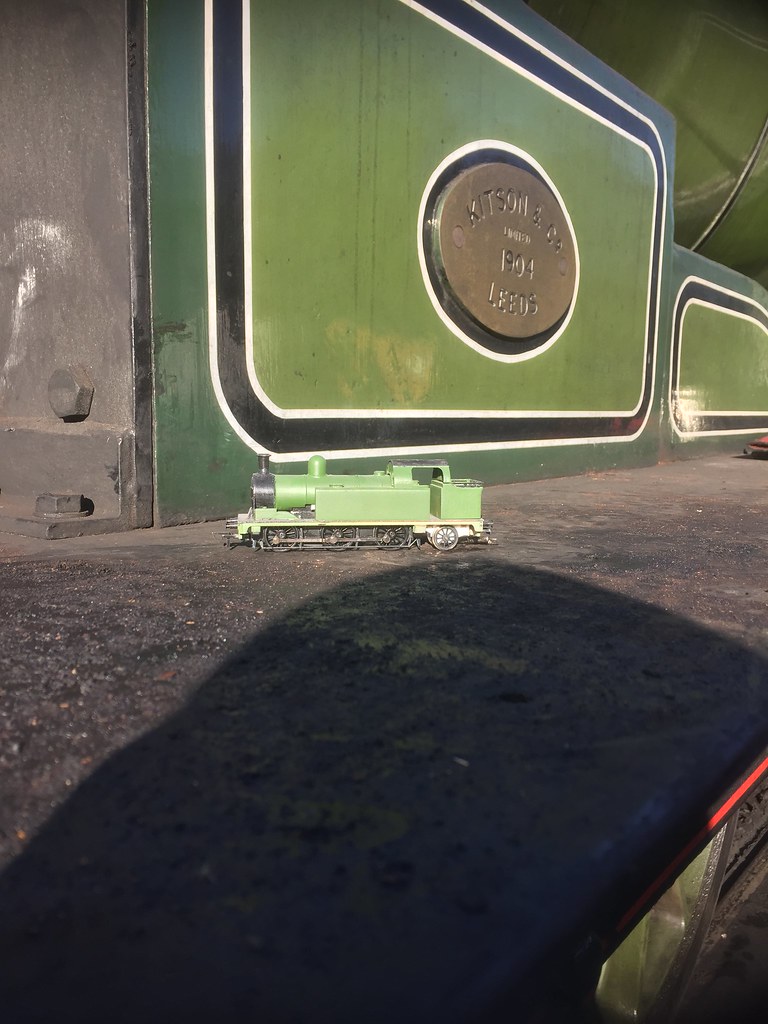 The model isn't finished yet, but once the S1 is out of the way, this will be my main focus. The lightness of the paint colour in this shot, compared to real No.29, makes me think the fix to my colour problems is to make the room brighter, a better spread of "white" LED's rather than the warm white I currently have. pictures always seem to look quite "nostalgic" shall we say in that room.