I had noted the build plate and the curved plate above the hand wheels. I am not sure that I will go any further on this one.
Regards,
Rob
http://www.railway-models-and-art.co.uk
http://www.flickr.com/photos/robpulham/
Top

I have had a few of Dan’s kits over time and one thing that I find odd is that some come with roofs and some come without. Sadly, the road van came without (yet an NER horsebox that I bought at the same time had one). I can only guess that it depends on whether Dan has roof material to hand when he packs the kit.

A suitable piece of sheet was obtained and cut to size. It was just too long for either of my sets of rolling bars so I had to resort to rolling it by hand but I got there in the end.

When built these vans were fitted with sliding roof hatches over the left hand set of doors on each side. Later these were replaced with canvas or just boarded over so lots of permutations are possible depending on the period being modelled. This van was to have roof doors so I cut an offcut of thicker brass sheet to size (my guillotine needed a bit of muscle to cut through it). This time it did go through the rolling bars…

The photos that I have seen with roof hatches had a curved strip across them which is possibly a rainstrip? I represented this with a short length of 1mm square rod.

The roof was still loose at this point.

The kit does provide the runners in the form of whitemetal castings so these were duly soldered on. And finally the roof was soldered on to the body. 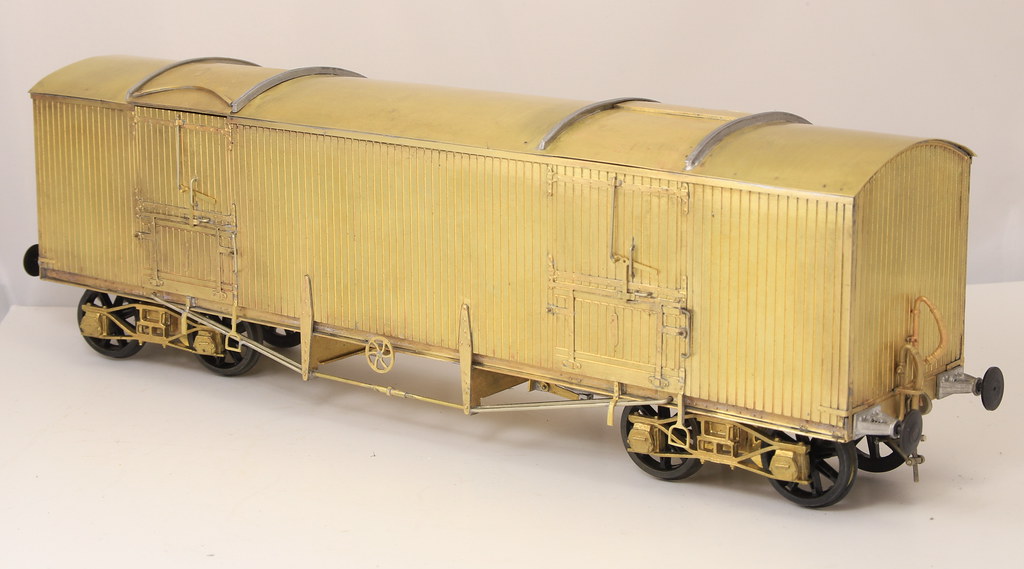 I had got this far, then while studying photos noted that there was a turnbuckle in the middle truss rod. I made some up using tube and 14ba nuts and then cut the truss rod to allow them to be eased aside and slipped on. 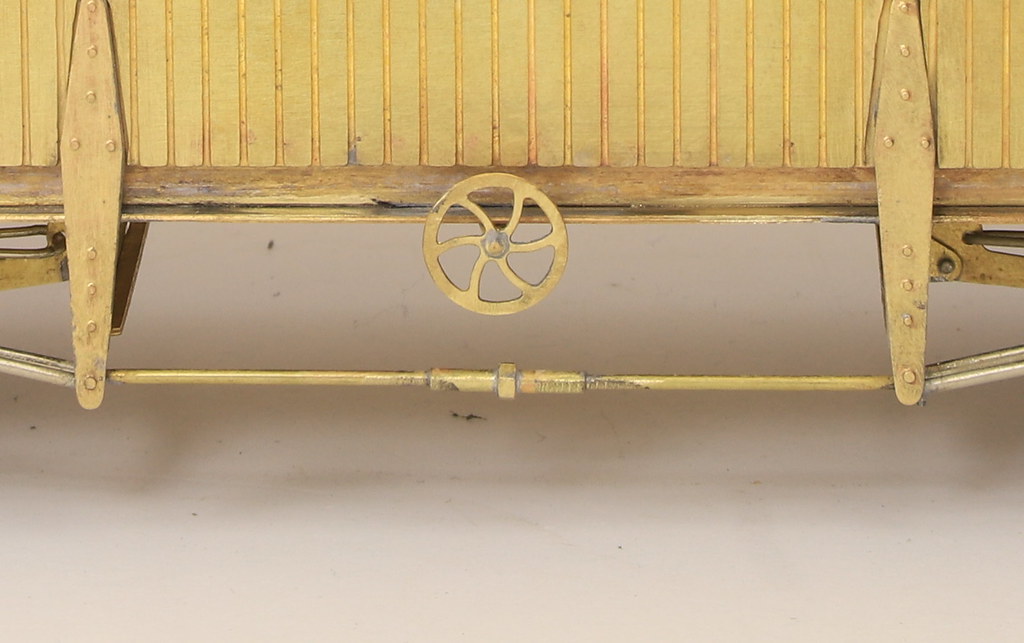 Have sent pm - but it may be too late now!
Top

And finally, the roof “canvas” is added along with a couple of the plates that adorn each side of the van were knocked up from scrap etch.

Next stop the spray booth. 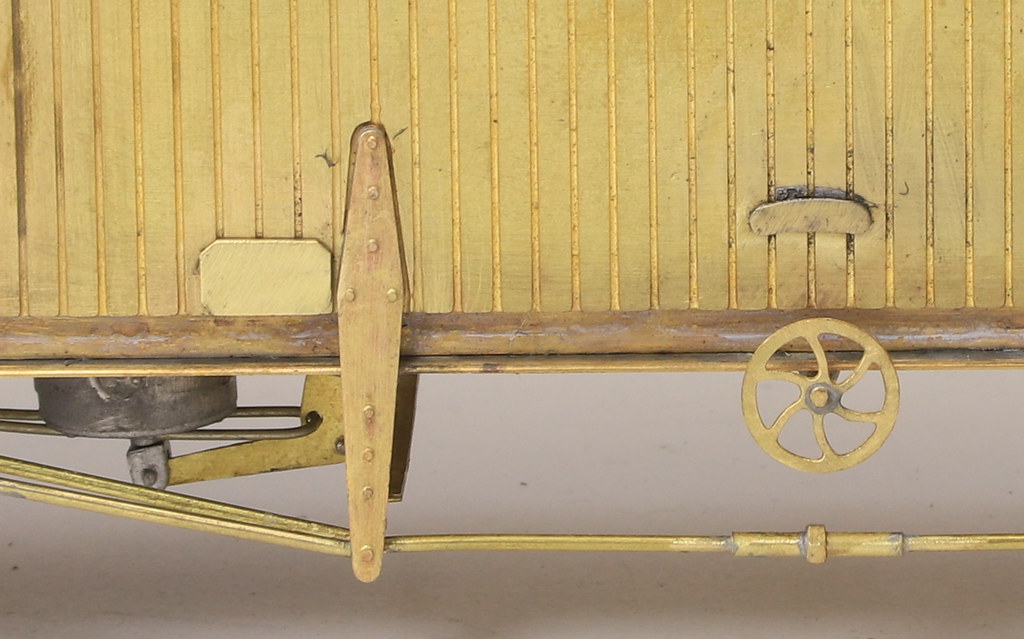 The paint shop has been busy and the brake vans are nearing completion at long last. 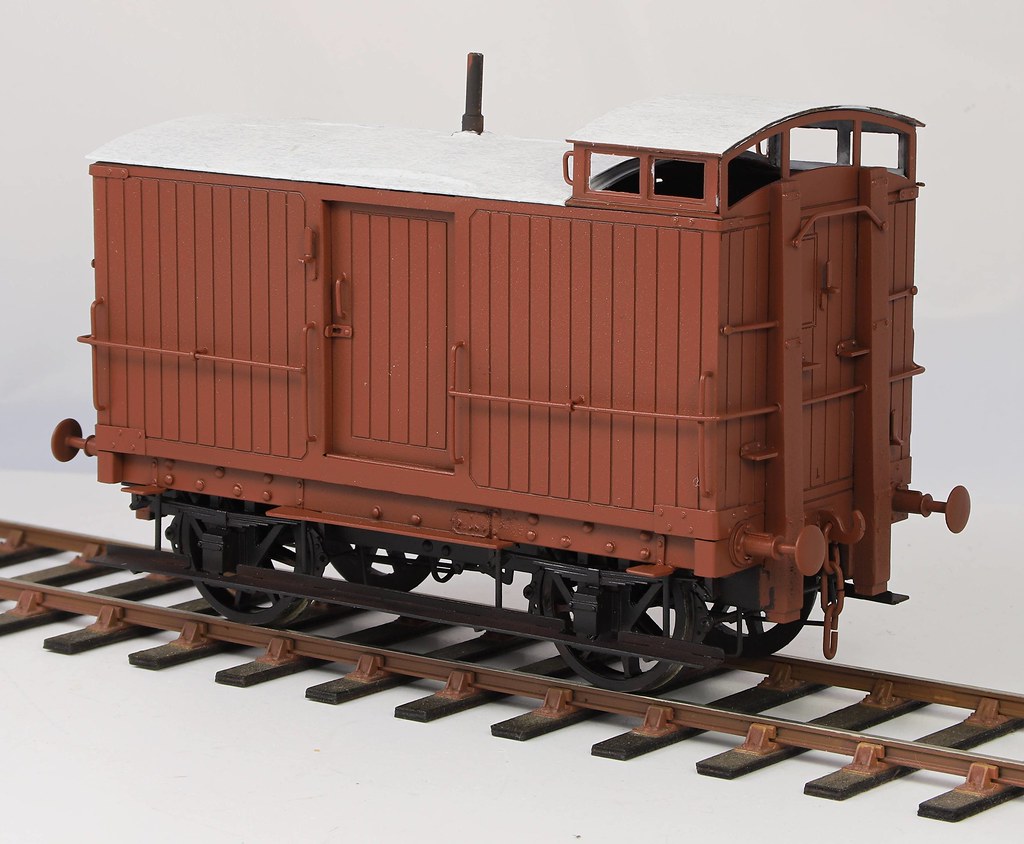 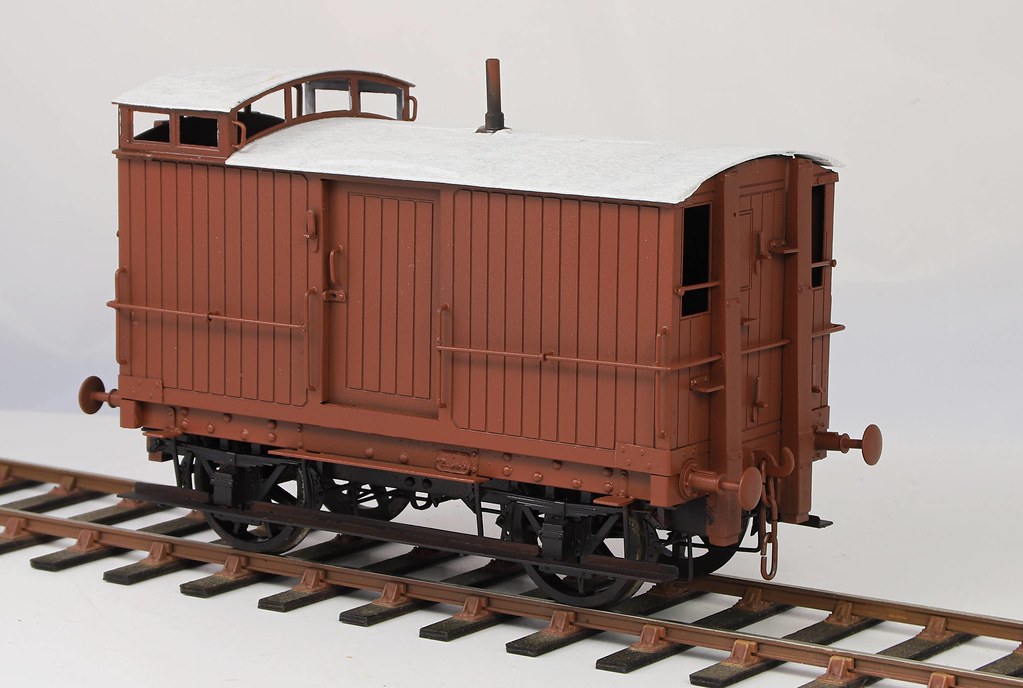 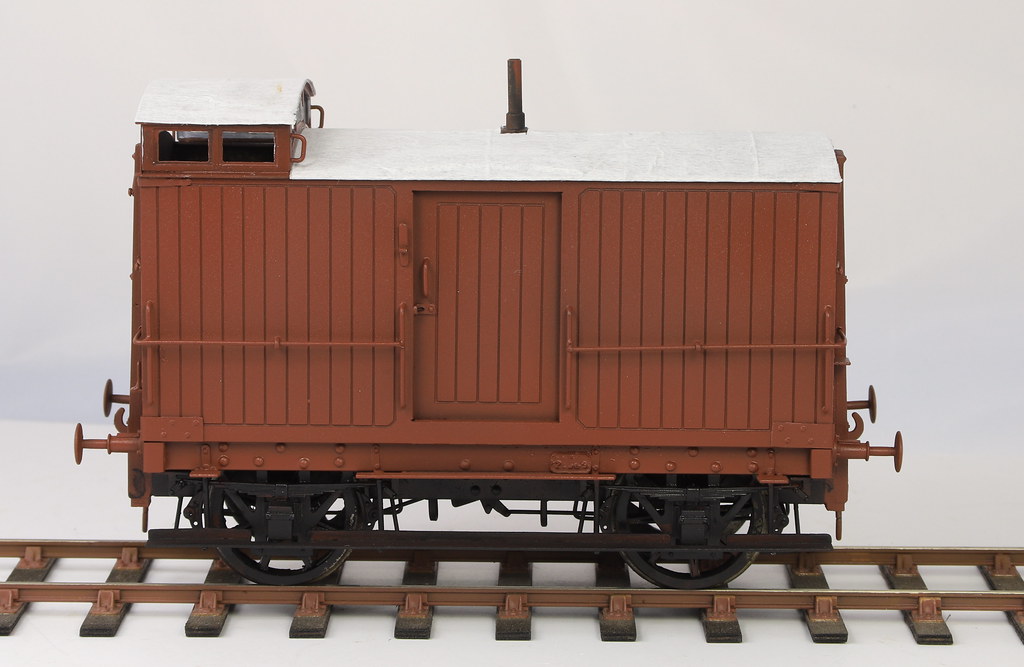 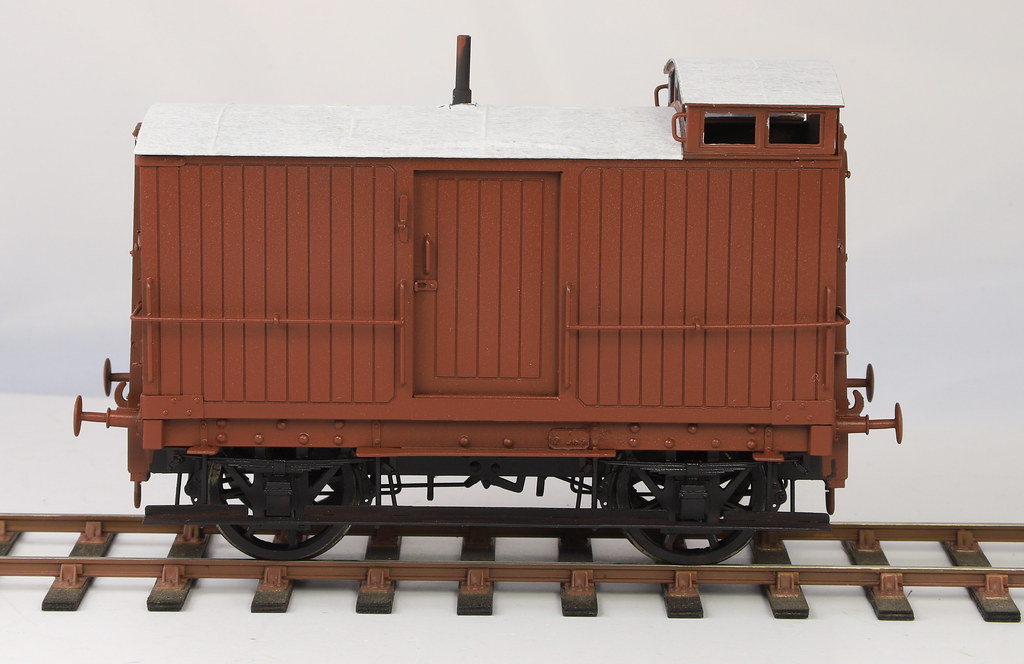 Nice Rob. One little thing - have the T-joints in the handrails to the right of each doorway come loose, or wandered slightly before the solder solidified? The pictures give the impression that the rails are not quite level.
Most subjects, models and techniques covered in this thread are now listed in various categories on page1

Very impressive, thank you for the pictures.
They are very American aren't they?
Perhaps Wilson carried over more USA influences than his brother did!

I was browsing a video of s US railroad this morning, and there was one box car with very similar underframe details to the G7.
Top

I agree they do look a bit American, it's interesting that not many companies used bogie goods vans.
Regards,
Rob
http://www.railway-models-and-art.co.uk
http://www.flickr.com/photos/robpulham/
Top

The other V1/3 is at a similar state of play. I was going to say what I am struggling with now is a suitable number for this van but just before posting I had another look in Ian Sadler's North Eastern Brake vans book and on the example shown in there, although the bodyside lettering isn't visible, the number plate 57916 is so I shall use that as my example. 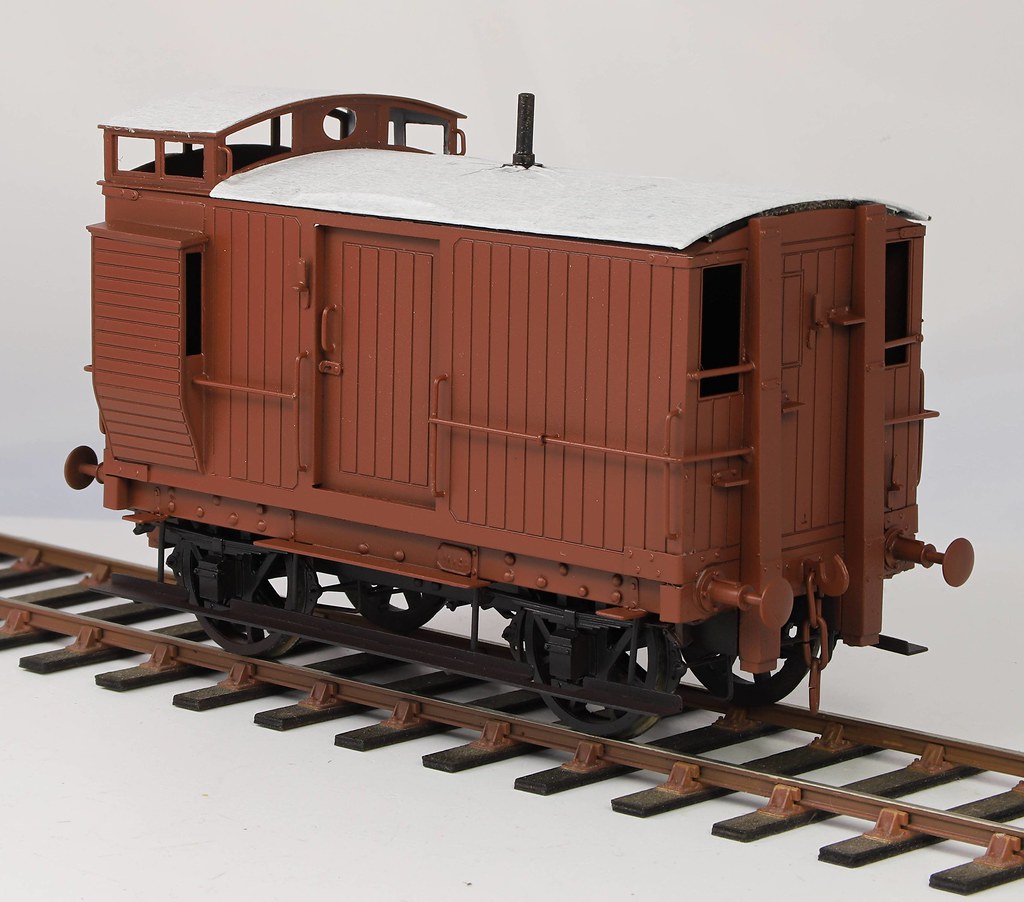 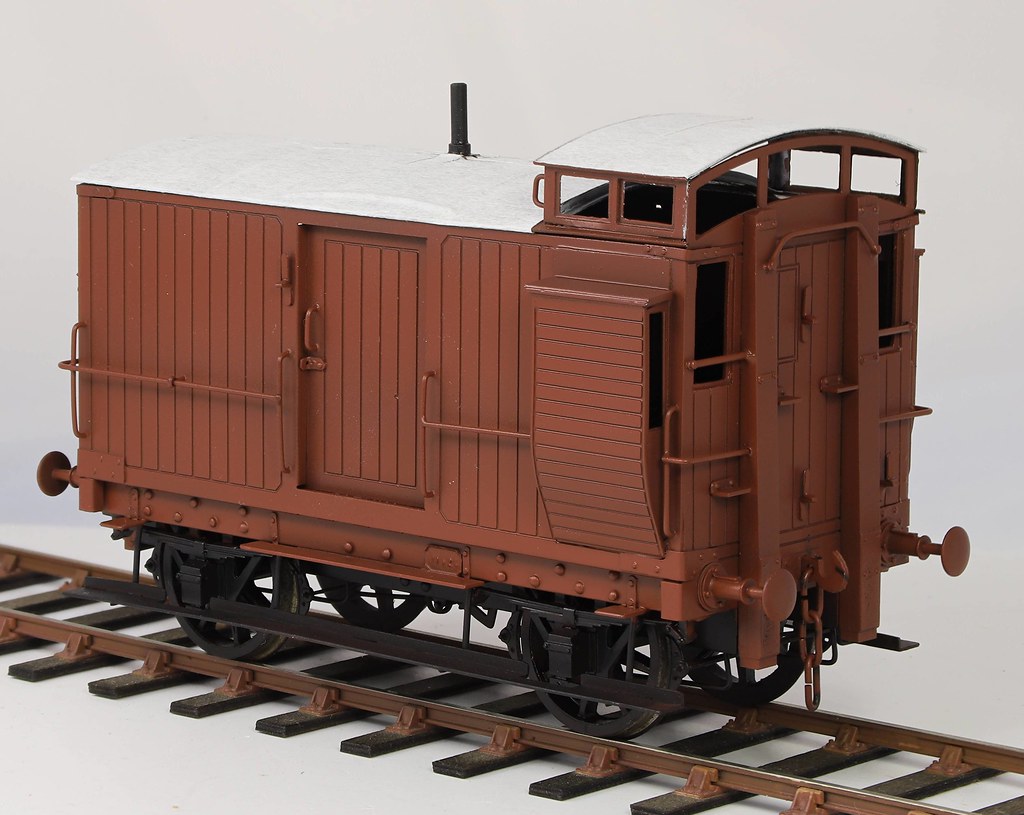 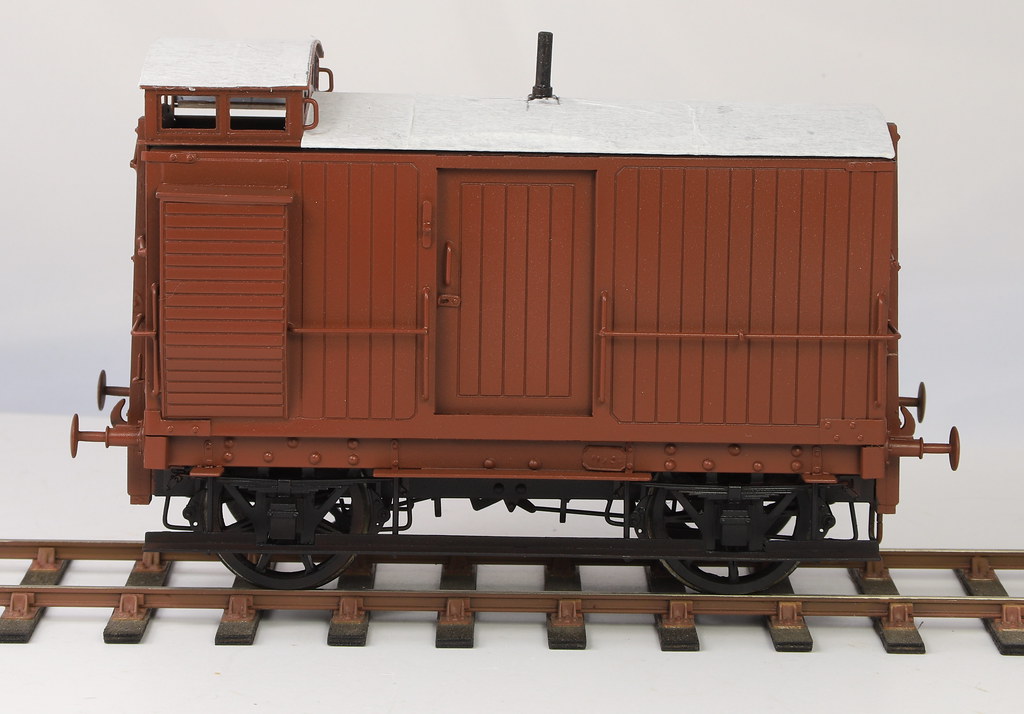 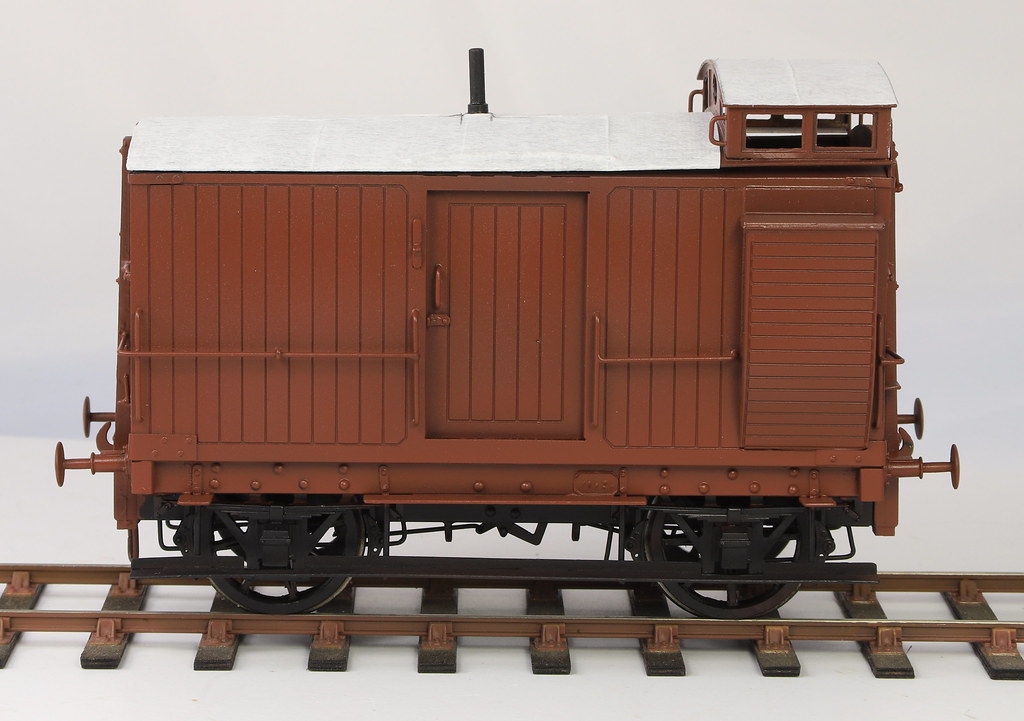 The Road van was painted at the same time as the brake vans but I held off posting photos because they formed part of the GOG virtual show’s lockdown models display. The show was held today so I am not taking anything away from it by adding them to my threads.

I enlisted Chris's help to paint the arrows on the plate above the hand wheels. 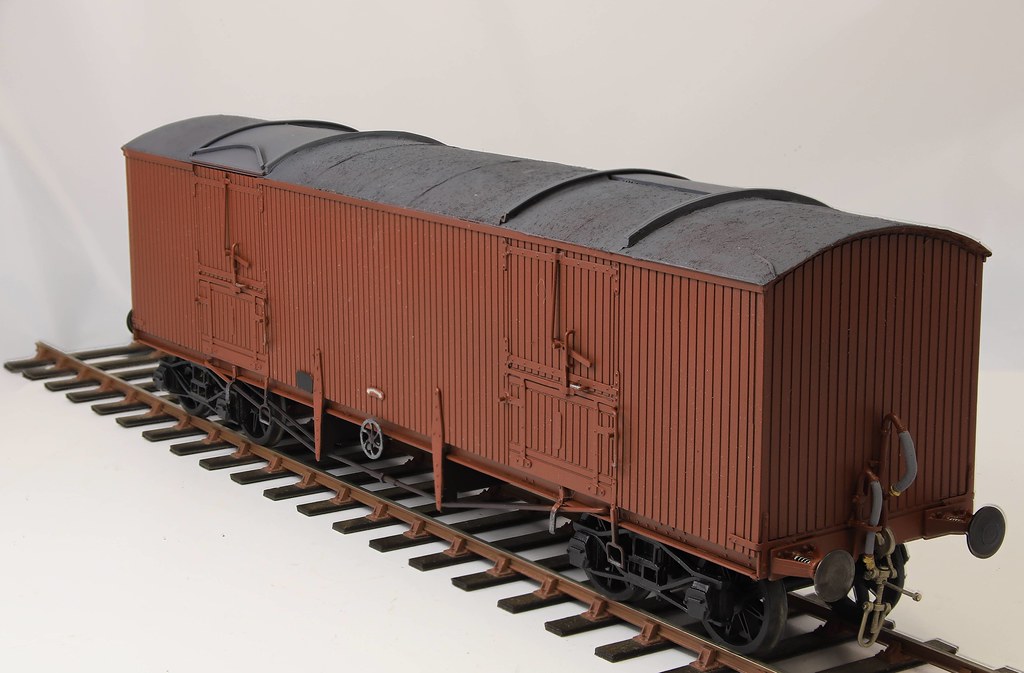 Finally I was asked by a friend to take photos of both bogie vans together. 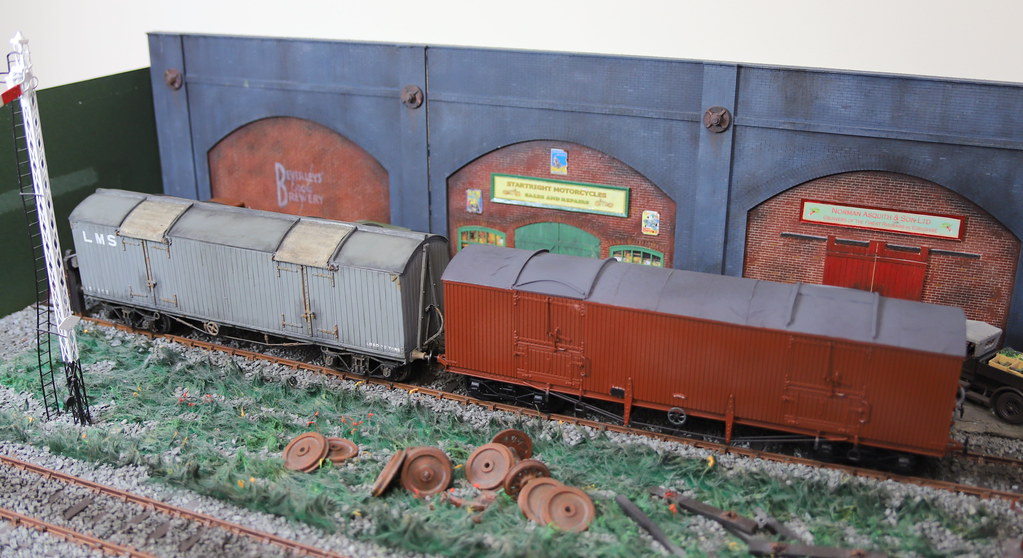 For those not familiar with it the LMS van is the Dragon Models Lancashire and Yorkshire 30 ton Bogie van now with TaffVale Models.
Regards,
Rob
http://www.railway-models-and-art.co.uk
http://www.flickr.com/photos/robpulham/
Top

To close this particular build off, the Road van is lettered, although I cannot take credit for the fine job on the lettering, it was done by its new owner.

This shot was taken part way through the process 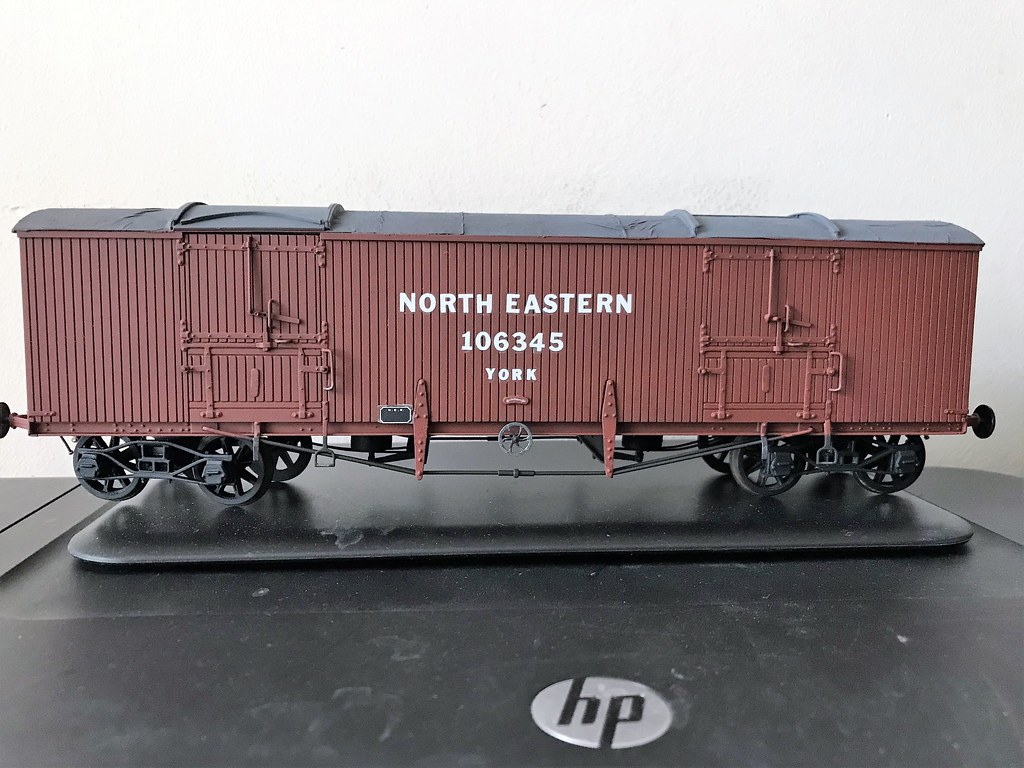 All lettered up and ready for the 'road'

A lovely model Rob, I like the 2 bogie vans together, they are very similar beasts.
Top

They sure are Dave, I look forward to getting on with mine at some point.
Regards,
Rob
http://www.railway-models-and-art.co.uk
http://www.flickr.com/photos/robpulham/
Top

In my ongoing quest to clear the workbench of its long time inhabitants I took stock of what was needed to finish the crane and runner/match wagons. It turned out that to do the bare bones of the build they only actually needed buffers and couplings.

Then I recalled why the build had stalled. The buffers and couplings that came with the kit were a bit of a 'hotch potch' of different makes/types. I bought it second hand so I am not sure which of them might have been included originally.

There were a couple of different type of white metal buffer stocks and a nice set of Slaters cast brass RCH pattern buffers but there were only three buffer heads. There were buffer heads/springs and retaining nuts. The trouble was that the springs were a bit bigger than the normal springs that Slaters and other supply.

I had a look in my spares box and managed to find three complete sets of Buffer stocks, one set NER, One set GNR and one set LNER. Which I thought would be typical of a railway company using whatever wagon was available to use as runner wagons for the crane.
Again, there was a mixture of couplings so I sorted out three assorted sets and added them.

It was at this point that I asked for assistance here on the forum as to what colour mobile hand cranes would have been painted by the LNER. We didn’t get a definitive conclusion but the suggestion was that they might have been lined black the same as the steam cranes were.

Armed with this, I masked them up and painted them black. At this point I thought that the runner wagons were a bit plain so I made up some toolboxes from coffee stirrers and added them to what was to become the leading runner wagon.

I couldn’t resist posing them with a shabby NBR van and one of the NER brakes to simulate a breakdown train.

Still some way to go before I and happy with them.
Regards,
Rob
http://www.railway-models-and-art.co.uk
http://www.flickr.com/photos/robpulham/
Top
Post Reply
614 posts