A few months ago, on a visit to the Severn Valley Railway, I found a couple of Hornby clerestories that had been shorn of their roofs and converted into what look like GCR carriages. I think I paid £4 each for them....

Once I got them home I had a good look at them. I think mostly the standard is high but as eer there are always certain little bits you think you could improve.

The list of things that I'd like to change on the pair of carriages I bought is, actually, quite short.

3. Clean up the cut and shut job on the brake third.

So I started with the brake third, cleaned up the hacked up brake end easily enough with filler and solvent but of coursethis ruined the paint work which I had to do over again. Two coats of matt yellow and two coats of satin brown later.... 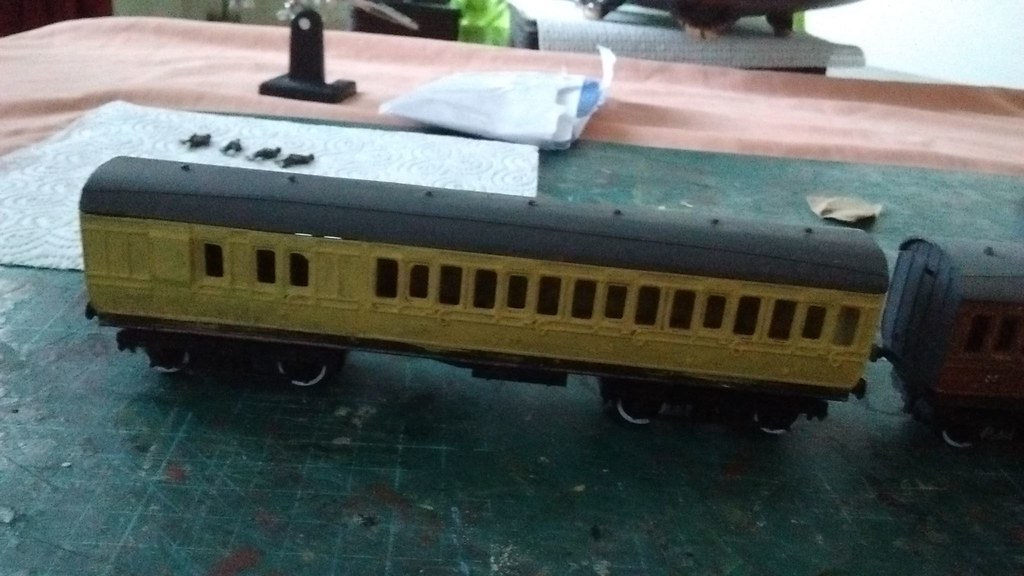 Oops, no, that's just after the yellow.

Anyhow, as I was saying. Two coats of yellow, two coats of brown, then I fitted some new glazing and built an interior from scraps of plastic sheet and balsa wood. 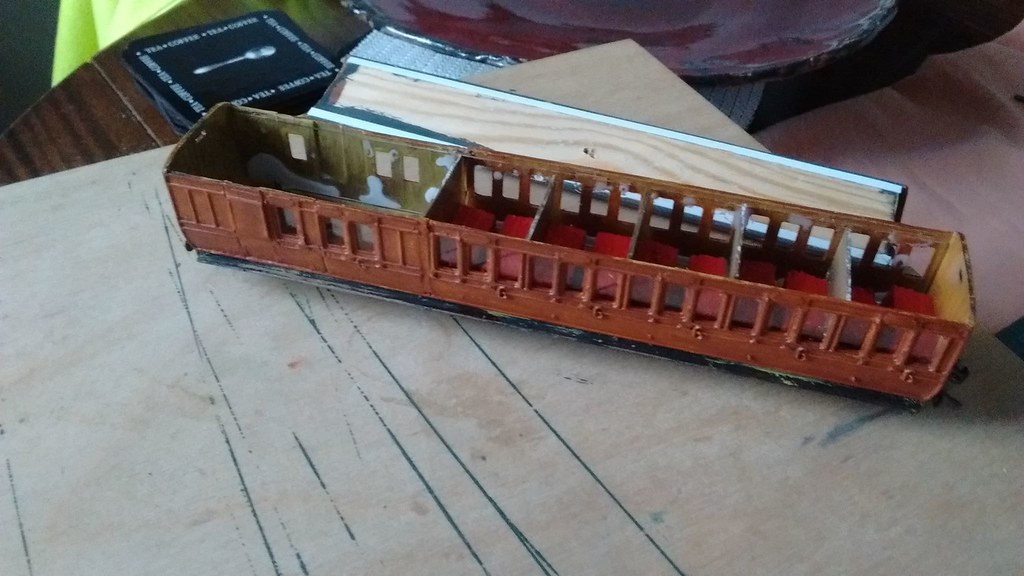 As you can see the roof for this carriage is a solid block of wood. I'm happy keeping that as it seems to have been quite nicely done, but at the carriage ends eventually I'll be making use of the filler again and masking the joint between body and roof. Which means localised re-repair of the teak....

Before I can fit the roof, you might notice I've added a few strips of plastic sheet down either side of it to mask out any gaps between body and roofline. That needs painting.

The nice thing is though, it's actually quite close to completion.
Top 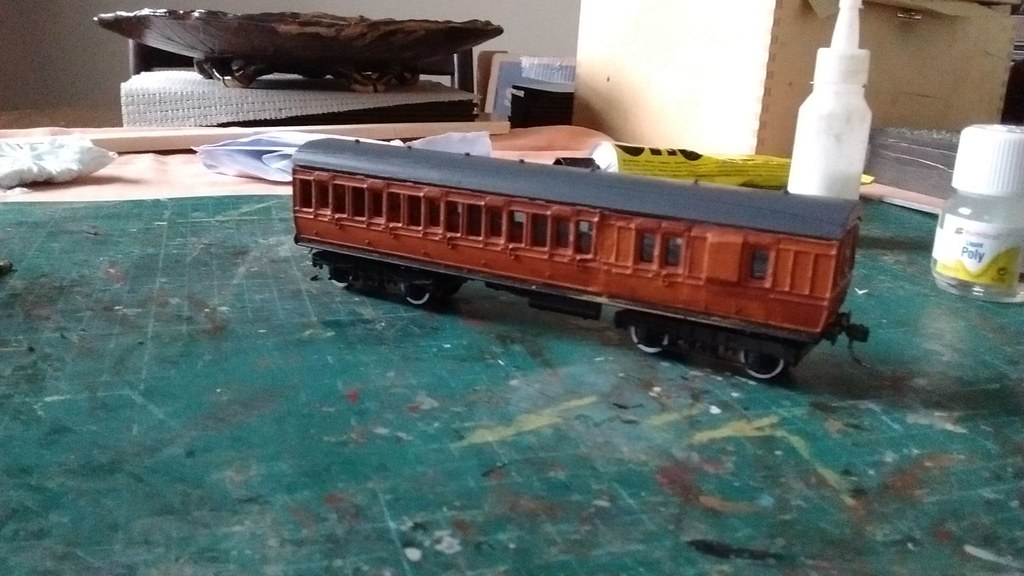 After the roof was repainted, both it and the bogies were re-fitted. There was a gap between the roff and the bodysides, which as an experiment I filled using glue 'n' glaze, reasoning it might be a neater way of doing things than using model filler. It works! Handy tip to bear in mind for the future.

After the photograph was taken the paintwork was cleaned up somewhat, so about the only things left to do on this model are the transfers and varnishing.
Top

Suddenly there are two of them.... 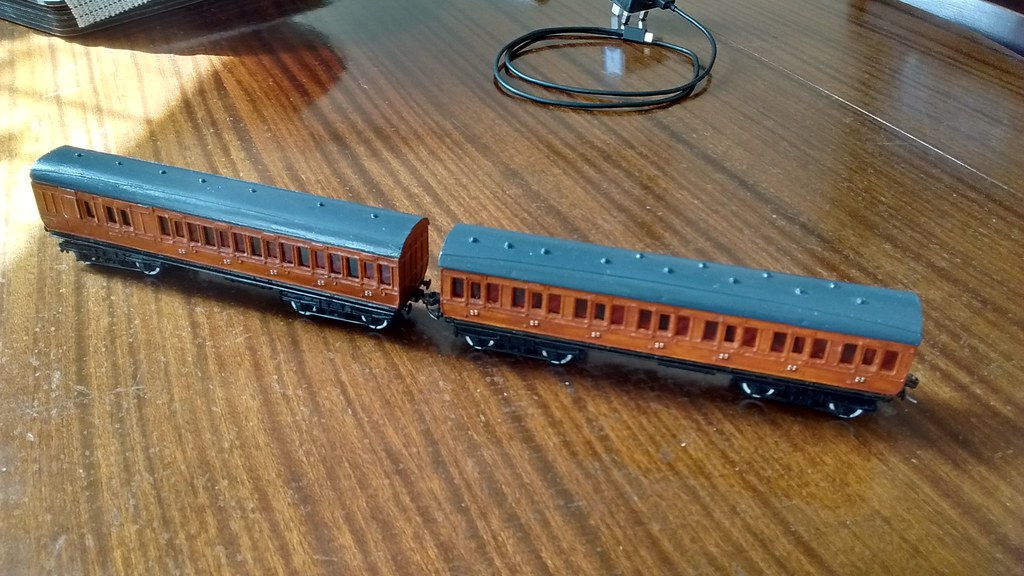 And that provided the spur I needed to proceed with another pair of my own for a decent rake. I'm currently working on a brake third; I did toy with the idea of doing a cut and shut on the brake end but decided that I probably wouldn't be able to match the neatness of the beading and the panel joints, so I accepted the compromise and left the bodywork as it is. (If it was acceptable to Peter Denny, it's good enough for me....) 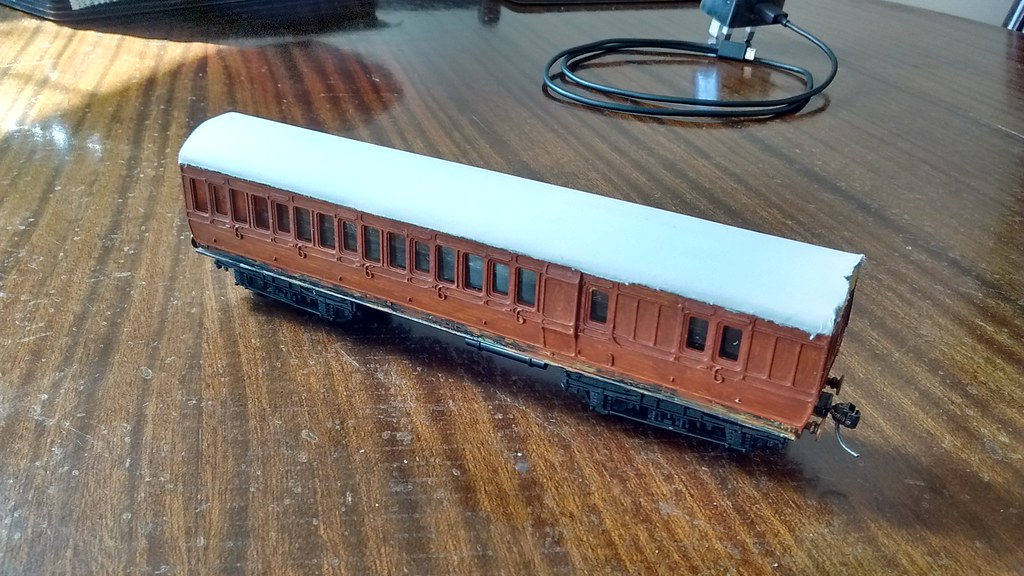 Now for this carriage much of the effort and work is going to be in the roof. I did buy some aluminium profile for the roof, but it was too wide, so it has gone back into store for another project. Onto Plan B then, which was to bulk out the clerestory with balsa wood and carve that down to an arc profile. Once I had got an arc I was happy with (and it lines through with the existing carriages, so I'm happy with that as a result), I covered it with paper for a smooth finish. The next task of course will be to fit some rain strips and ventilators.
Top

On the brake third you purchased, I am rather interested to learn how the cut and shut was done so the guard ducket was nearer the end.
The body molding with floor incorporates the pivot for the bogie rivet.
Did the modeller replicate a new pivot in a complete body cutoff, or did he leave the floor with pivot intact and reposition the sides only?

The brake carriage that I bought, whoever did the conversion had left the floor and underframes well alone, to move the duckets they had cut out just the sides and then re-arranged the brake end to suit. 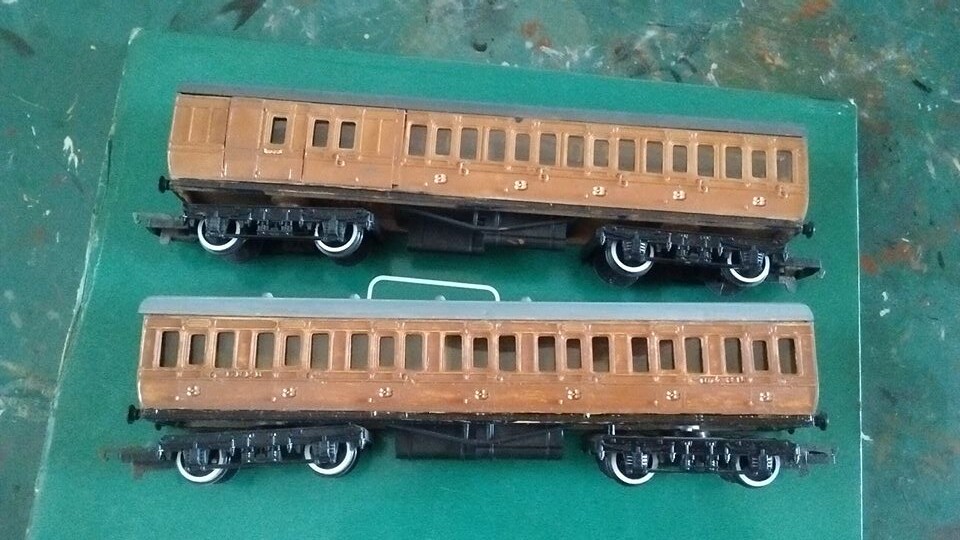 This is how they came to me, so you can see on the brake end there's some evidence of the sides having been cut off, cut up, and spliced back together.
Top

Knowing these models, which I believe are loosely based on Great Western designs. What a difference changing them from clerestories to arc roofed has made.
Top

The brake carriage that I bought, whoever did the conversion had left the floor and underframes well alone, to move the duckets they had cut out just the sides and then re-arranged the brake end to suit. .....

This is how they came to me, so you can see on the brake end there's some evidence of the sides having been cut off, cut up, and spliced back together.

Thanks for that James,
That would have been fiddly, but I believe a pleasing result to get the GC arrangement more or less correct.

Well! I wasn't expecting to be away for two months or so, but I'm back now and hopefully it won't be another two months before I drop in again.

I finished a rake of four GCR carriages converted from Hornby clerestories, and then I went away and worked on a Metcalfe MS&L/ CLC country station kit, which took nearly two months because I turned it practically into a scratchbuild, covering it with plastic brickwork sheet and a new roof and etched brass/ whitemetal canopies and whatnot.

I recently came back to my rolling stock and set to work on my Barnum rake after a visit to the GCR-RST at Ruddington in September. I've built another saloon and re-worked my first. 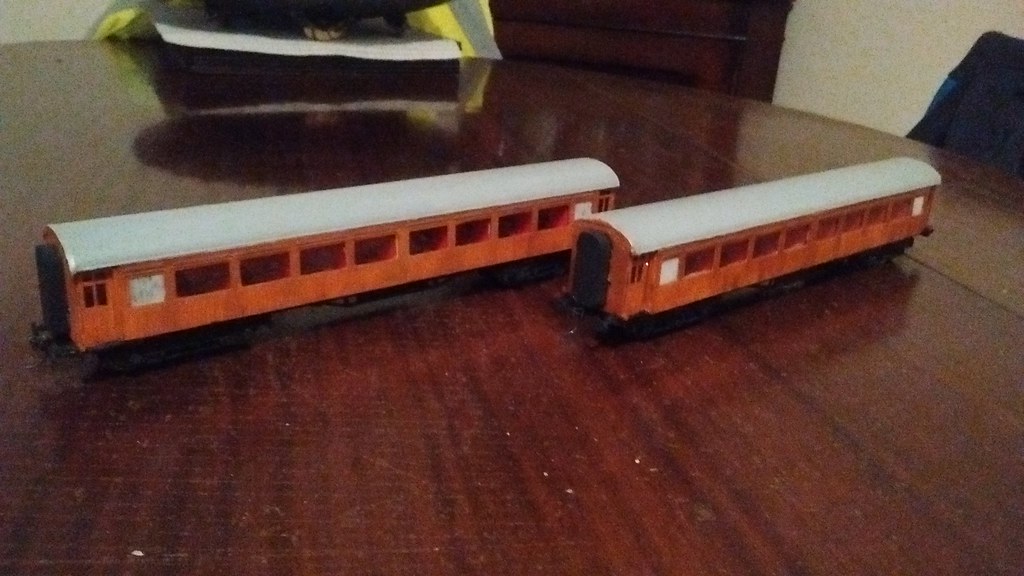 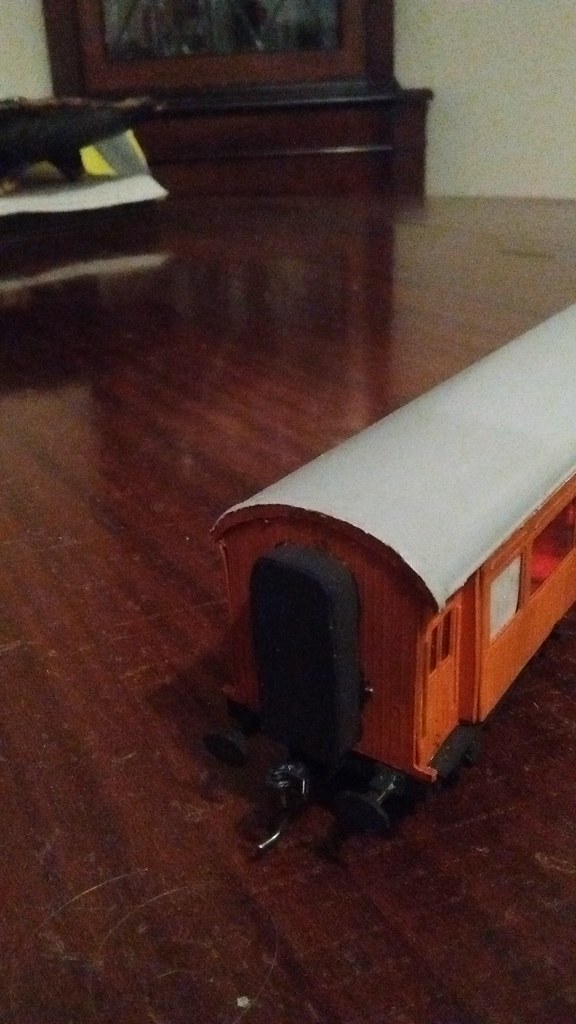 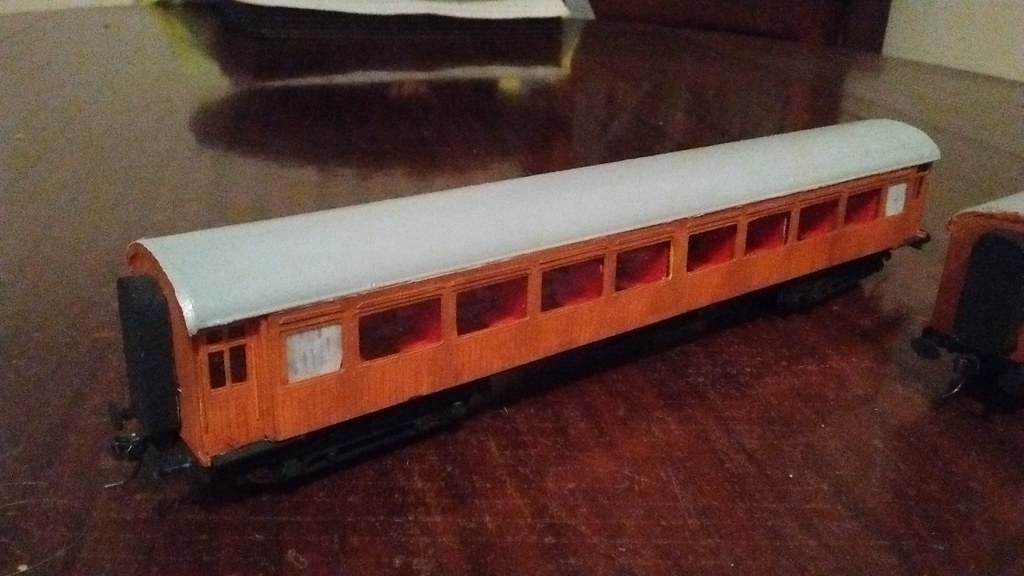 They're surprisingly modern-looking, for coaching stock built in 1910. I'm looking forward to doing a pair of brakes to go with them, but there are a few projects I have in mind before I get around to those. It's the usual case of having bits and pieces left right and centre with the intention of building X/Y/Z, leave them too long and you either forget why you bought them or they go missing! So I'm trying to get through my roundtoit pile.
Top 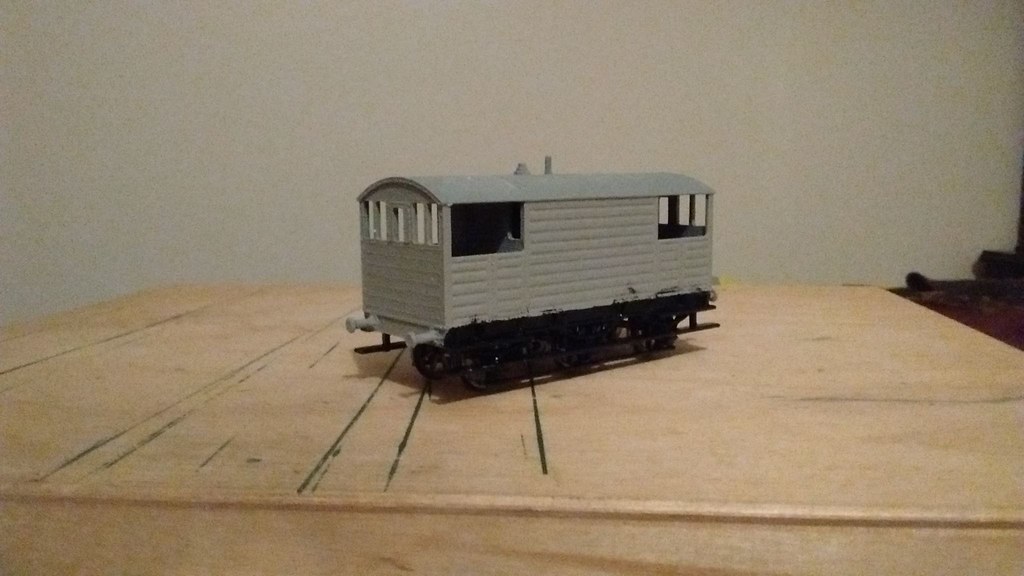 This was the situation as of the middle of this week. At this point I was still working on painting the basic print- it had had, by that time, a coat of primer, a coat of the main body colour and a coat of matt black to the underframes. Being just the first coat you can see there was a fair bit of touching in and cleaning up to do, also the solebars I'd painted the same colour as the underframes rather than the body.... 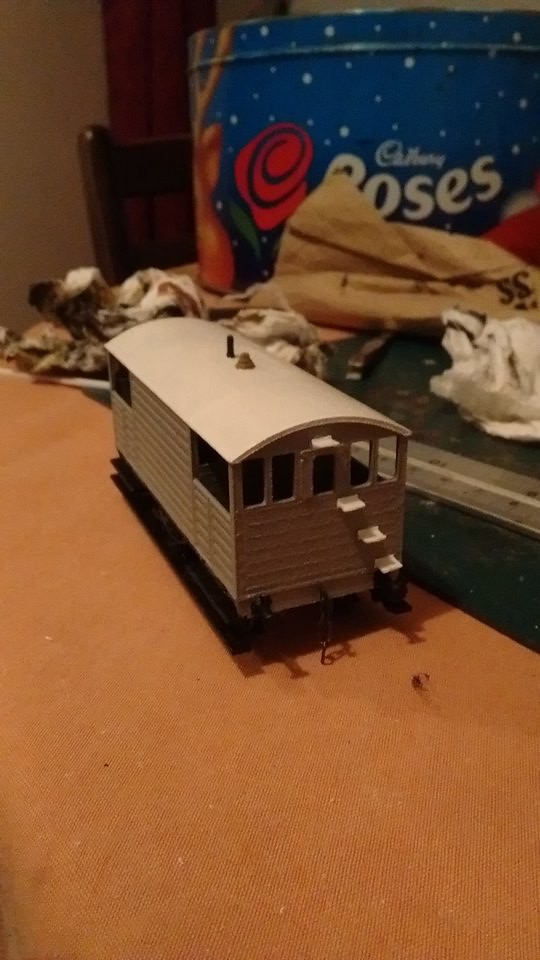 Moving on a couple of days I've cleaned up the paintwork, painted the roof- by this time everything is at least the right colour and neatened up. You can see this is the end of the print which didn't come out very well defined. 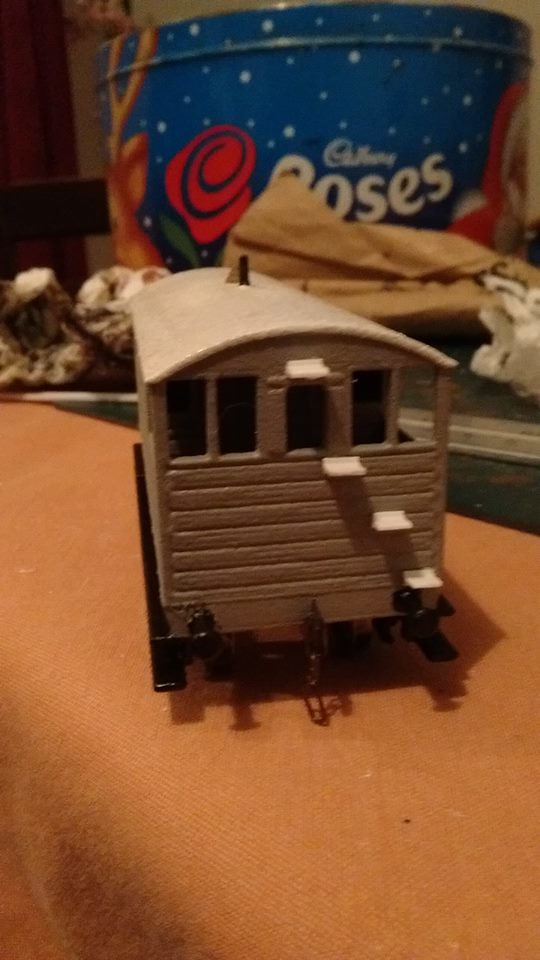 There's a lot of detail that's not included on the print; lamp irons, hand rails, foot holds and so on and so forth. So when it came to adding extra bits, my first job was to add some couplings, just because to work this material is an exercise in brute force.... well I got it cut after a struggle and was able to fit a pair of 3-link couplings. Then I turned to the footholds. I've got some 3mm x 2mm plastic I-section girders, and it struck me that but filing down the bottom of the 'I' created a 'T' section, the top of the 'T' then glues quite securely to the body to create the foothold. 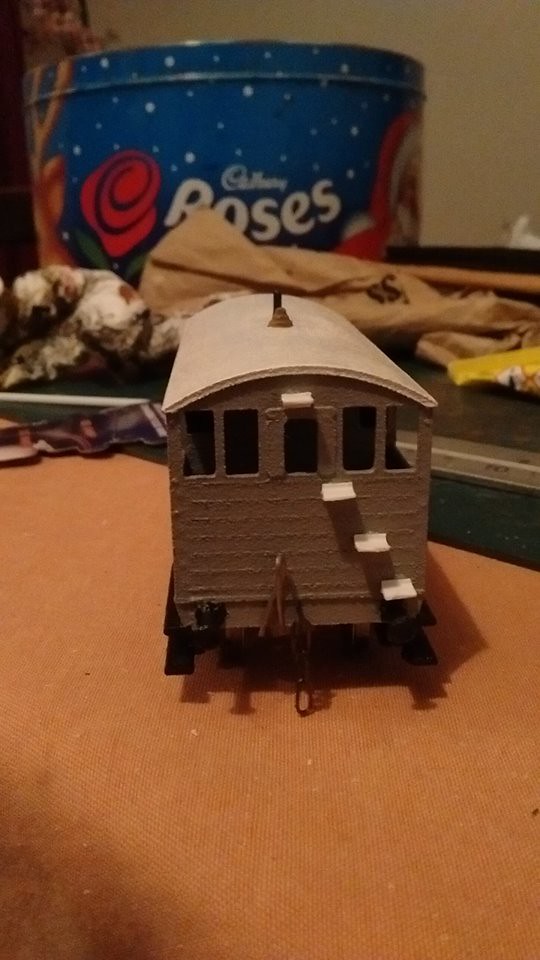 Snap!- well, not quite. Dukinfield obviously had a masochist working in their drawing office, the vacuum pipes are bent up in two directions at once... I folded my vacuum brake pipes out of 30-Amp fuse wire, which was err.... fun.

I've still to look at the hand rails and lamp irons.
Top 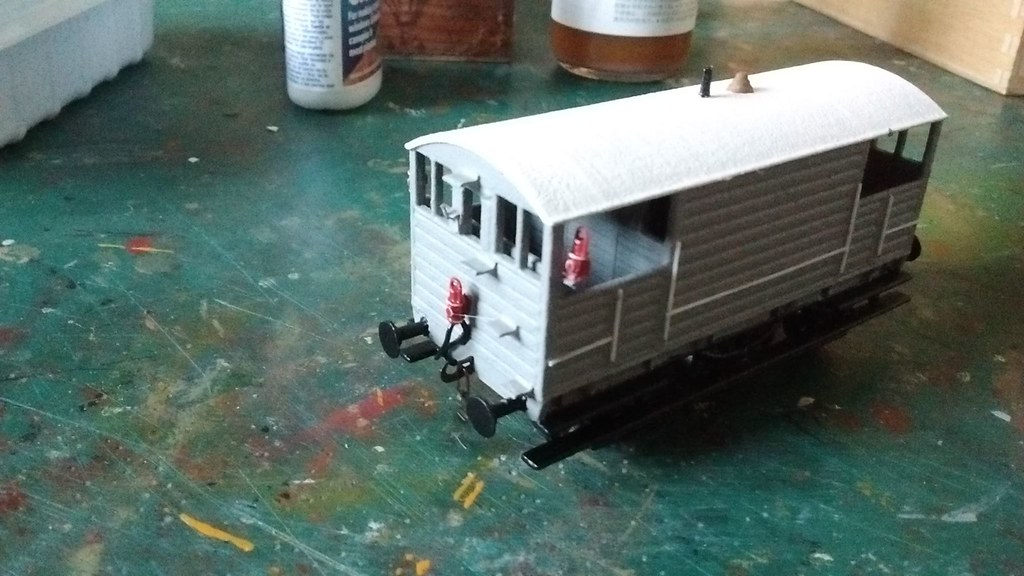 Still some work to do, but nearly there now.
Top 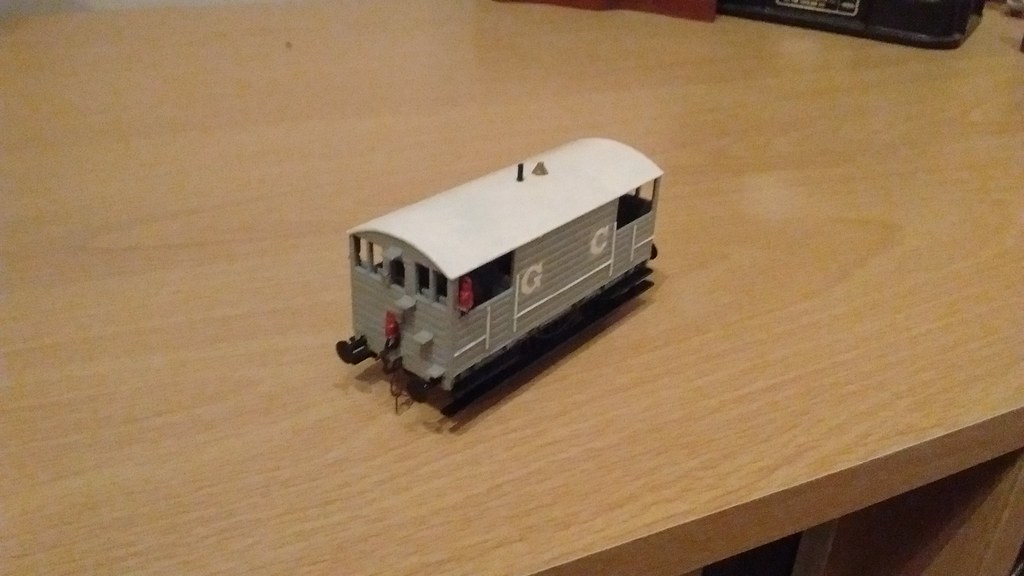 Something a little different...

Currently I don't have the room to build a layout, but I have enough space to build a diorama for photography, in addition to planning the wider inland empire I aspire to. That wider empire I've taken to calling Rufford Red Lion Square, an imaginary GCR terminus in north Nottinghamshire. The genesis of this was when I pondered how the Sheffield & Lincolnshire Junction Railway would have responded had the Midland Railway's Sherwood Section been an actuality rather than an imagining of Mr. Eagles.

My thought was that the S&LJ would have built its Sheffield- Gainsborough route, but also would have extended its branch to the Midland at Beighton, to basically follow the route of the much later LDECR Sheffield line as far as Shirebrook, before swinging south east in a rough horseshoe through Mansfield Woodhouse and Clipstone before terminating at what, in our reality, is the A614 opposite Rufford Abbey.

When the Derbyshire Lines and the London Extension were built in the 1890s, my idea then was that the Mansfield Railway was built a little earlier than in our reality, giving a connection between Rufford and Kirkby in Ashfield and thus a direct connection to London.

So that's the wider idea, what can I achieve in a space 3' by 15"? The first station out of Red Lion Square, which I've christened Cremorne for Pittance. The idea is that this is a small suburban station, two running lines and not much else. I took advantage of the Metcalfe Models card kit for a Manchester Sheffield & Lincolnshire/ Cheshire Lines Committee pavilion style station, but not wanting to build it straight out of the packet I decided to clad it in plastic sheet. 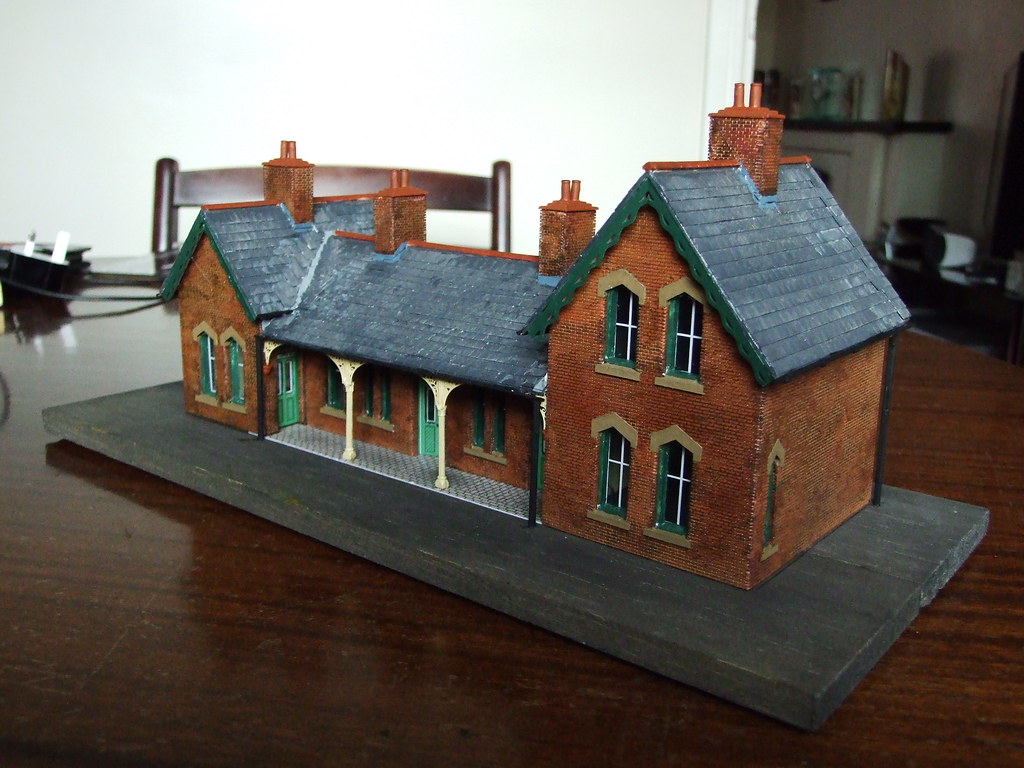 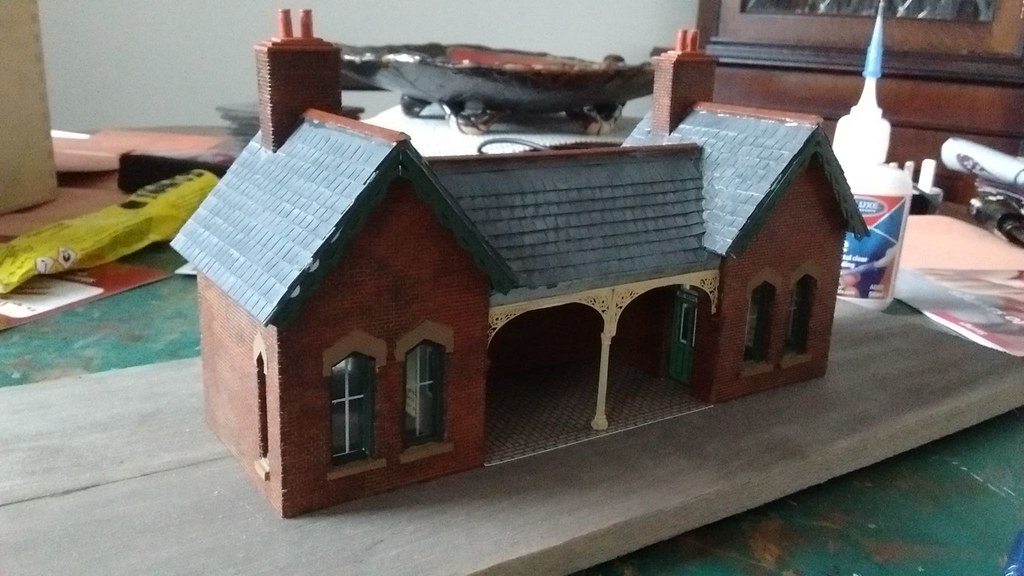 As you can see I also used etched brass and whitemetal for the canopies.

I built a simple baseboard from lengths of balsawood, wanting to keep it fairly lightweight, laid some Peco bullhead track and quite quickly got to a point where I could see if my idea was going to work or not. 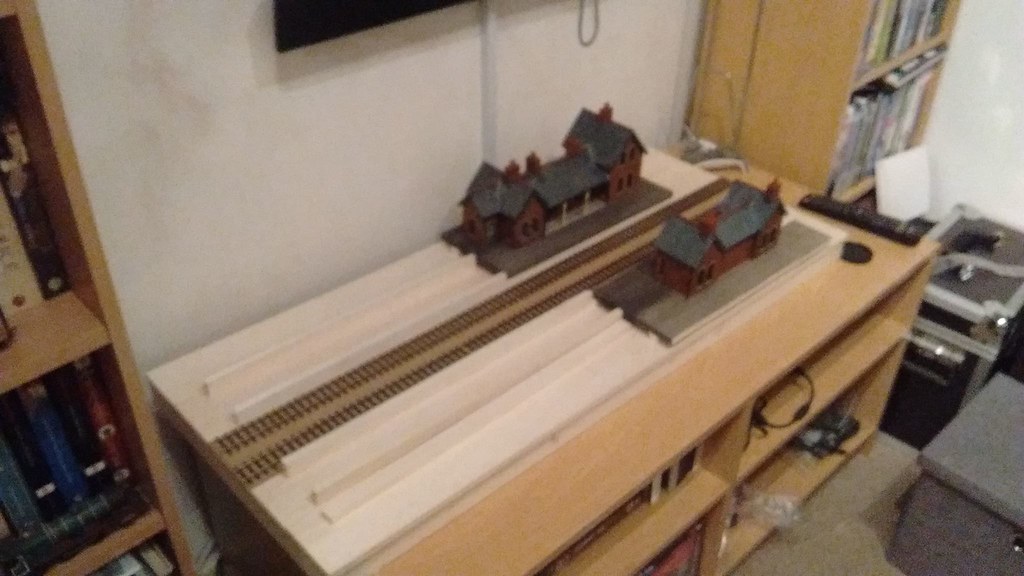 In my stash of bits I had a Prototype Models GCR bridge kit, which came out. 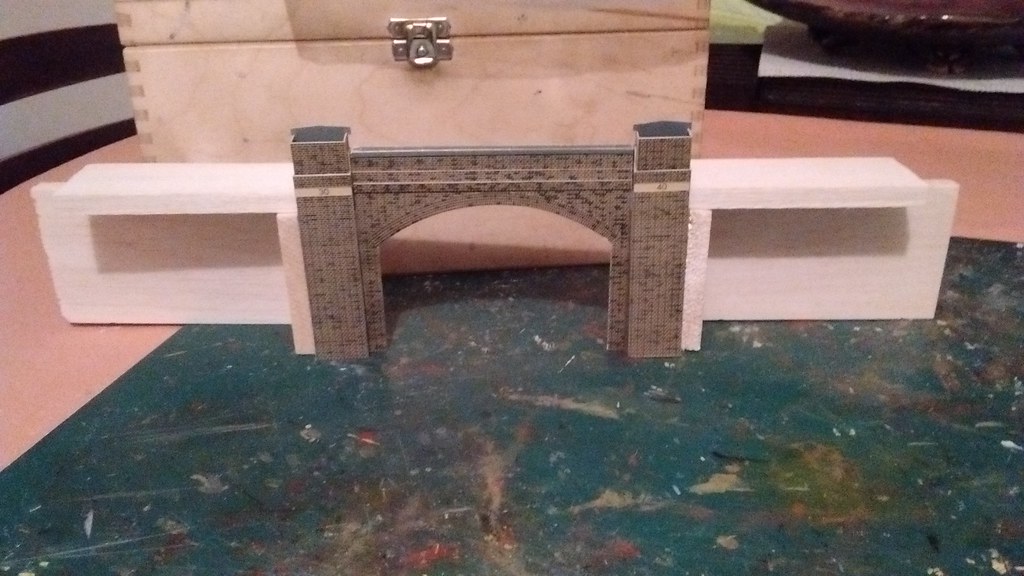 This too is going to be clad in brickwork plastic sheet.

You get a better idea of what I have in mind from the final photo, the state of things last night. I have used ballast as the platform toppings, with a gap on each allowing the bridge piers to be fitted. Rough landscaping is next on the agenda. 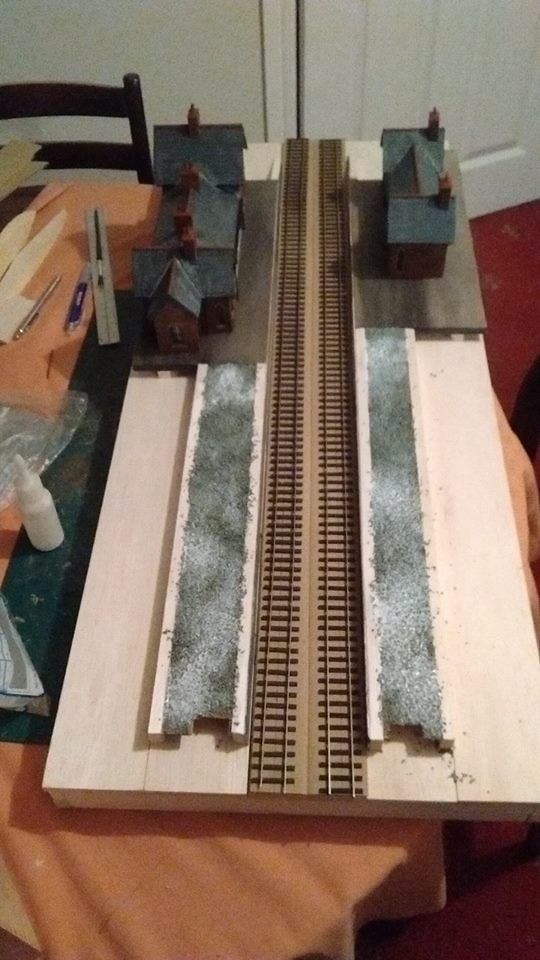 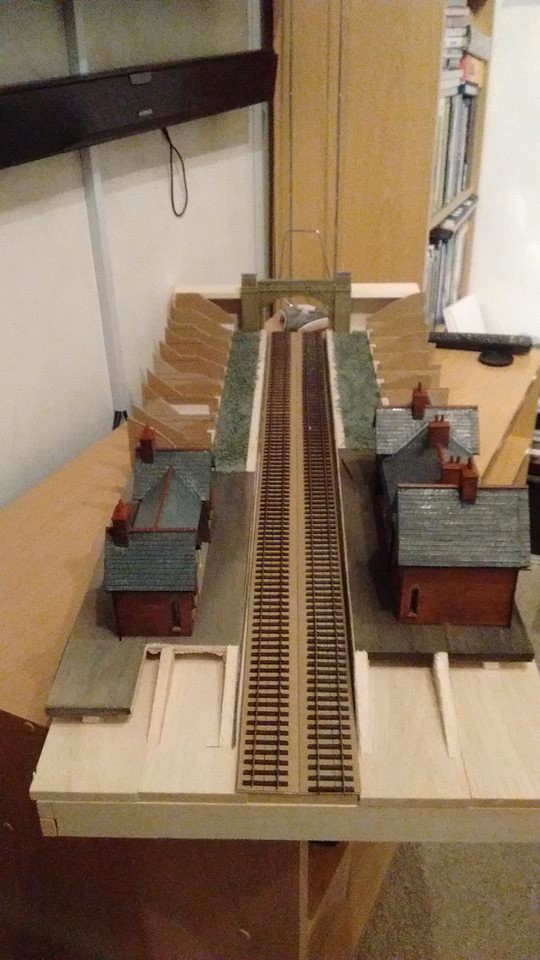 Anyway, once that was done, I started to clad the bridge in embossed plastic brickwork sheet. 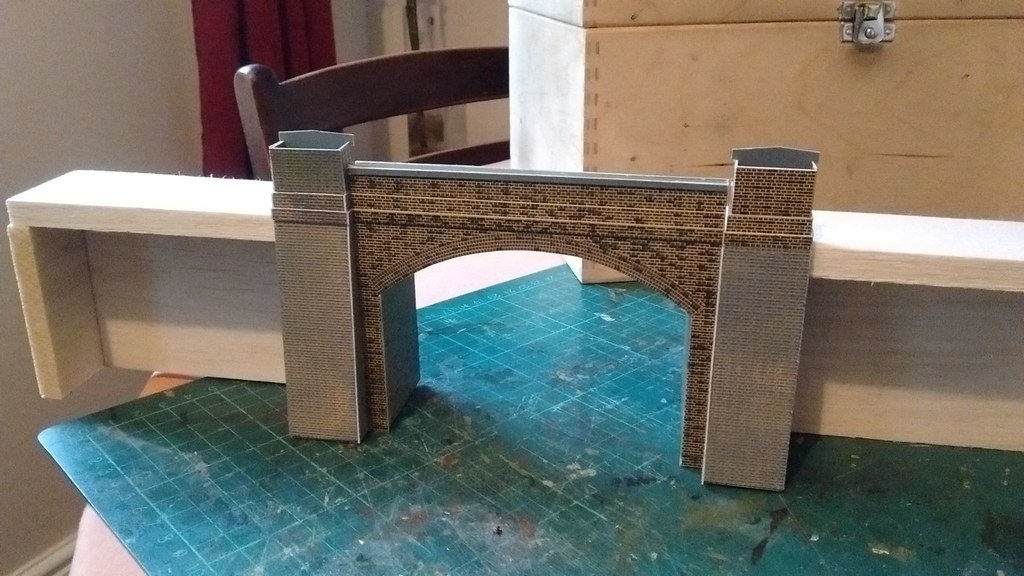 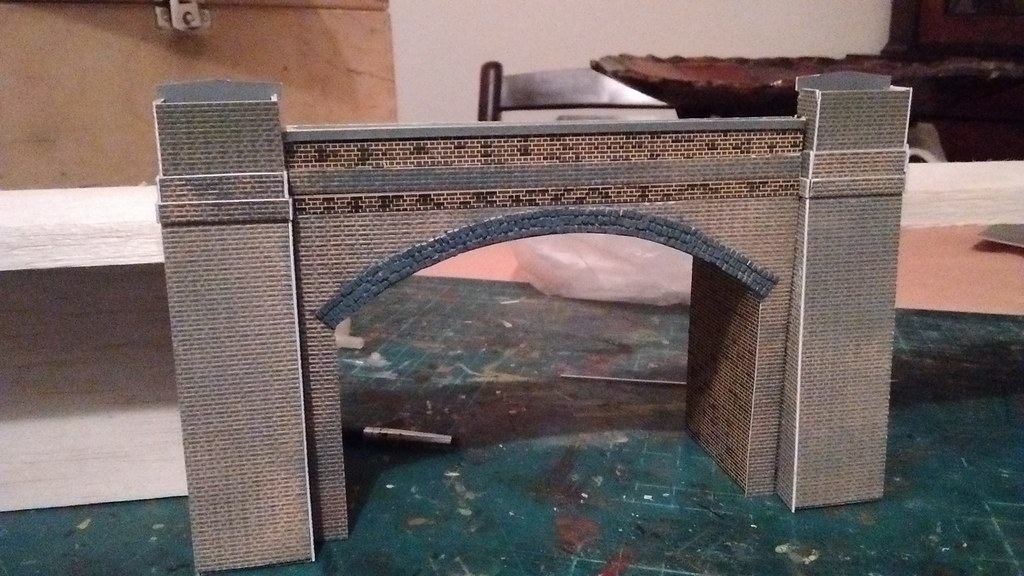 It all worked very well until I got to the arched brick courses, for which the only solution I could think of was to do each brick individually. It wasn't as horrendous as I feared it would be, once I had perfected a method of picking up and placing the bricks (dilute PVA on a pair of tweezers), and once painted it looks quite good. 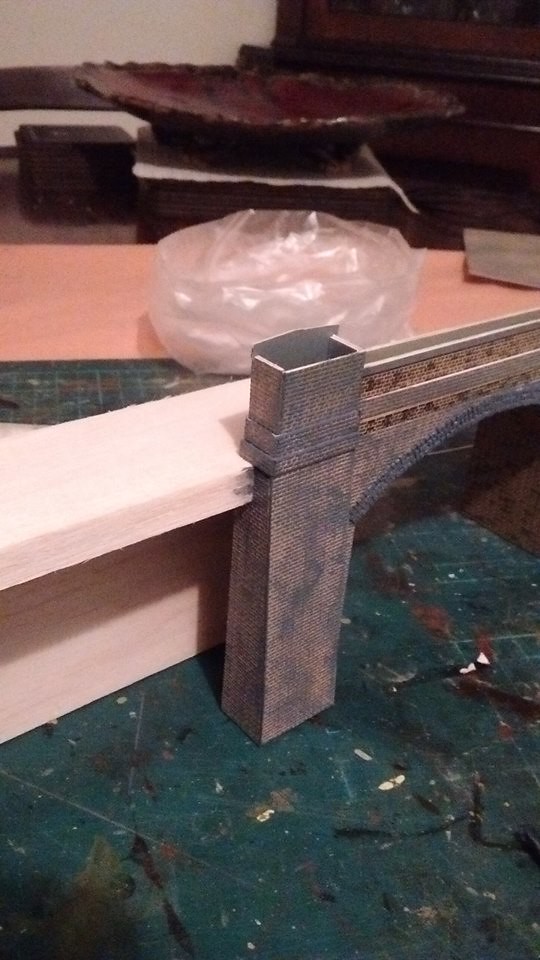