You're far too kind John but the real test (ie a REAL TEST with tried and true rules, nightwatchmen, drinks trolley, 'strategy' etc etc) of you v us starts out here on 25th November. Hopefully we won't be bothered by obscure rules (made up for glorified rounders) then.

And on that note I trust any cricket afficianados are aware of the 'The Duckworth Lewis Method' , - no not the rules but a hilarious album by curiously enough, 2 Irishmen (Thomas Walsh and Neil Hannon), explaining in song some of the aspects of the great game. Well worth the listen.

Grantham still amazes me - just a pity it was not out on show somewhere during September; I would have changed my entire itinerary around just to see it.

Grantham is now back from Southampton and safely stored away until preparations for Leeds begin at the end of the summer. Another excellent weekend - top quality show and top notch accommodation as well. Special mention must be made of the pie on Saturday night: a real winner for the social secretary (Mr. King).

There were some trains involved and even time for the odd photo on Sunday morning. 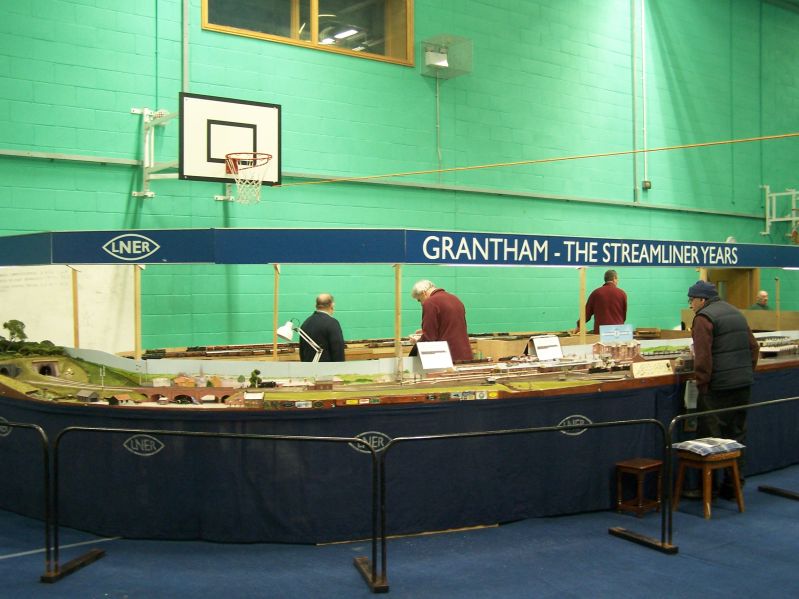 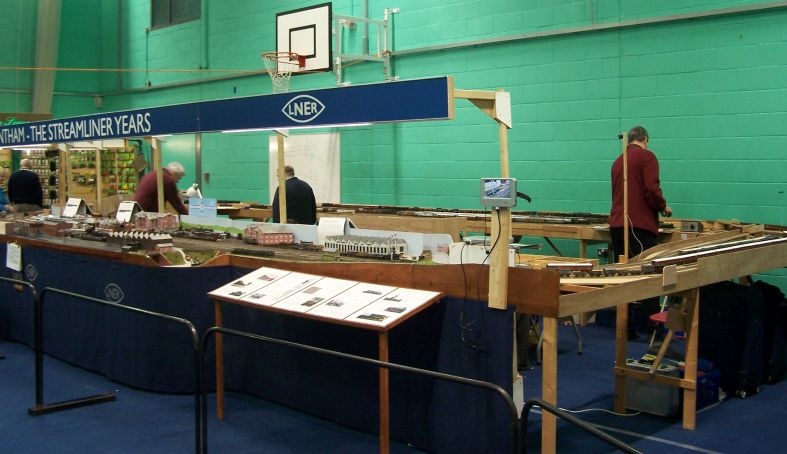 A couple of general shots of the layout before opening. Roy, Graham, Andrew and Tom in view.

On Sunday we seemed to have stopped at a point where the yard was much more empty than usual, so I parked the camera in a few places it can't usually go and tried some low level shots. 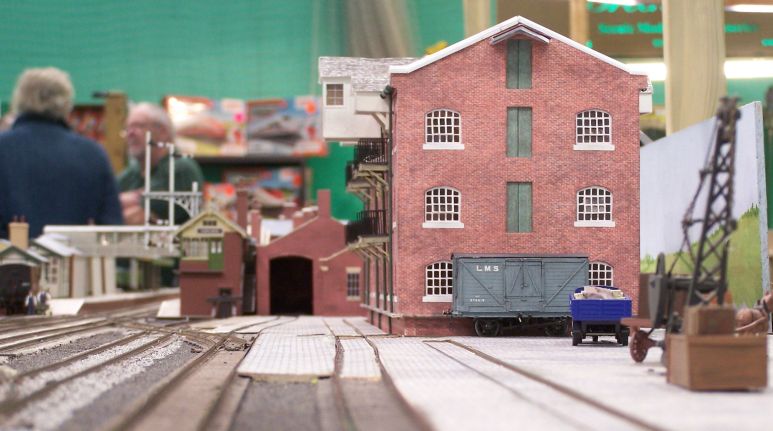 This is looking north up the goods yard towards the granary and station.

Turning slightly left, the photographer sees Yard box, two porters dragging a trolley past John Smart's horsebox, 4412 and 5429 on shed in the background and the south end pilot in its customary place. Dave Hammersley (Roxey Mouldings) beyond. 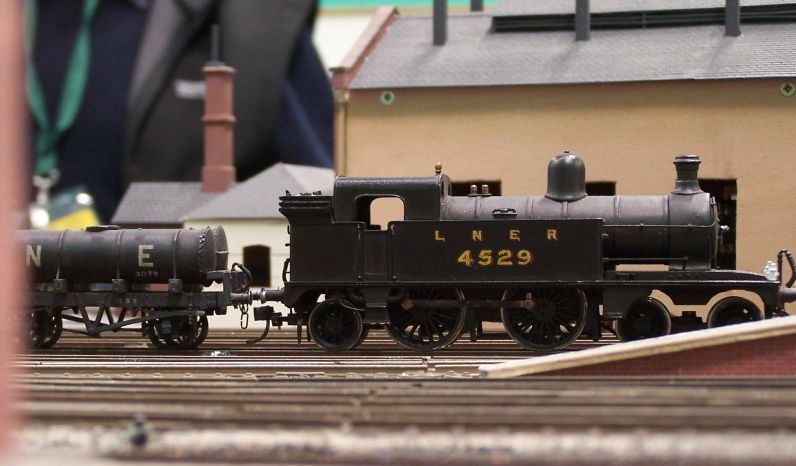 Further left brings us squarely to the pilot and the gas tank which lives in the same spur.

As well as the usual troubleshooting and quick maintenance jobs on Sunday, I wanted to run the new Quad set which is under construction round the path it takes on the layout. That meant departing North Yard, transiting Platform 2, reversing the width of the station into Platform 5 then departing again via South Fiddle to its home in North Road 6. Here it is (successfully) carrying out the reversing move. 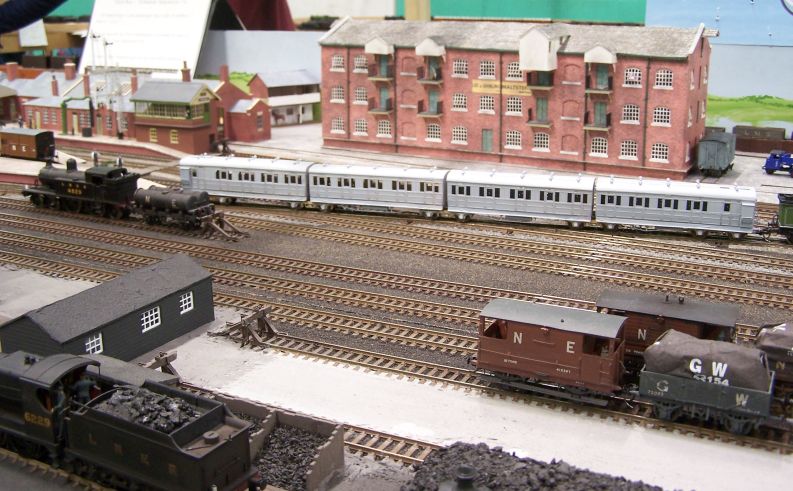 What I didn't know on Sunday morning was that Mrs. W was also snapping away showing what we get up to when the public are safely queueing outside. So here are a few informal shots of what was going on: 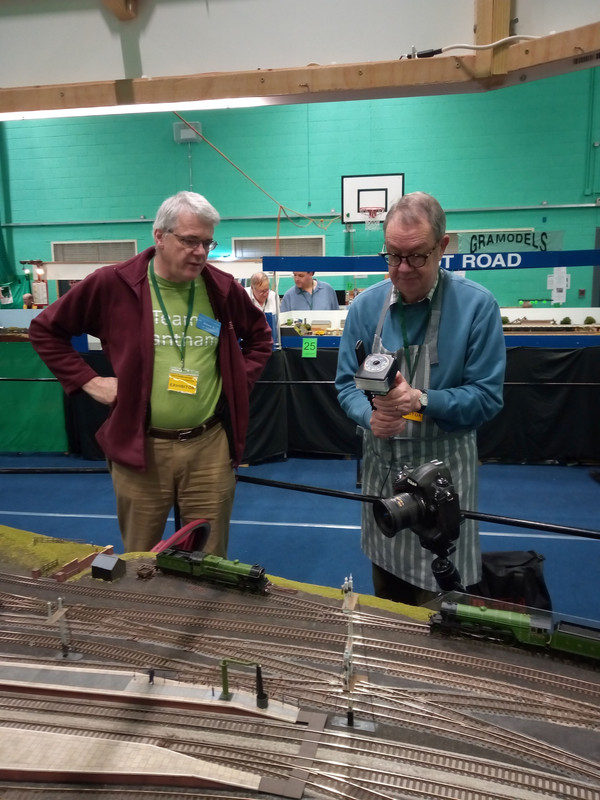 The Official Photographer was taking some pictures of something I (obviously) can't disclose. 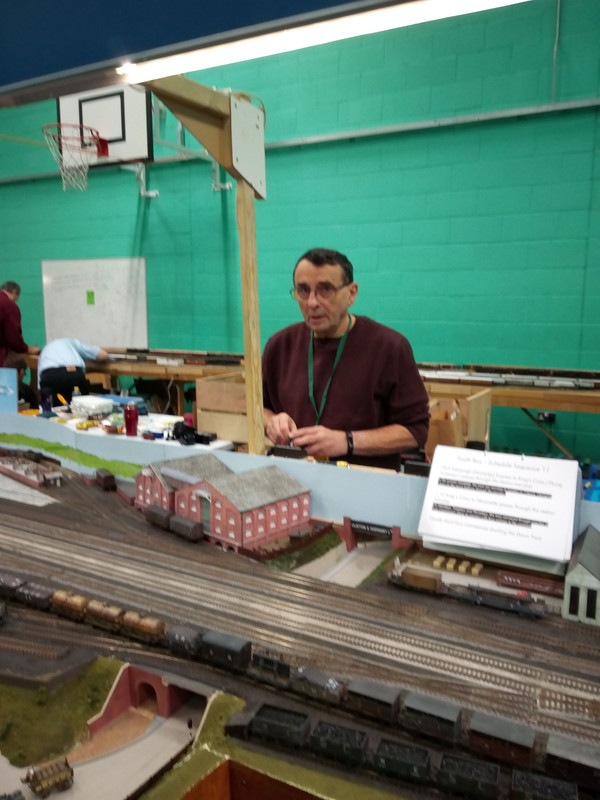 Tom was either practising his shunting or doing his nails. 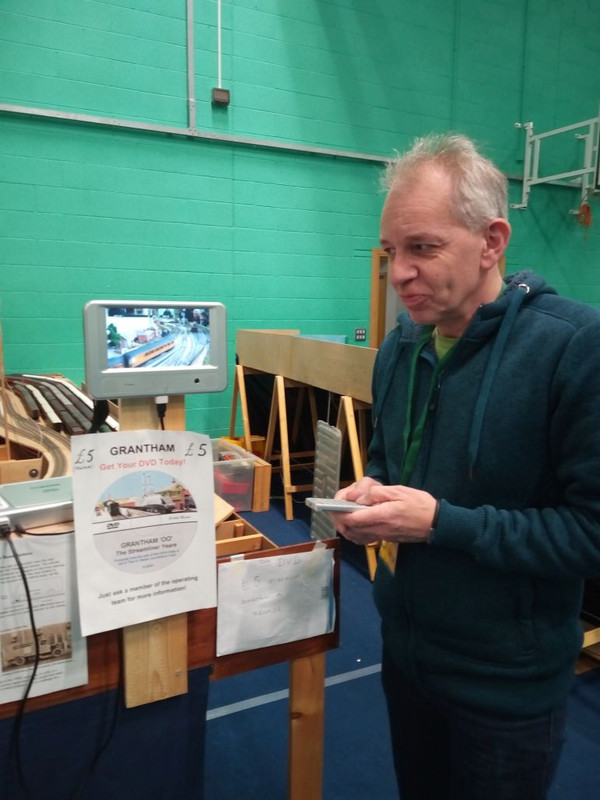 The DVD has to be started and then reminded to repeat. 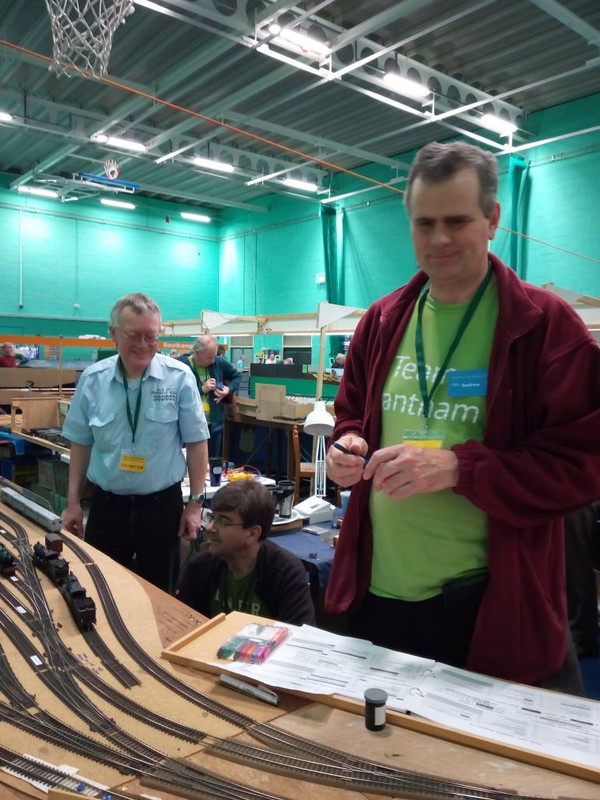 Obviously it's all work, work, work in the fiddle yards, the engine room of the layout. 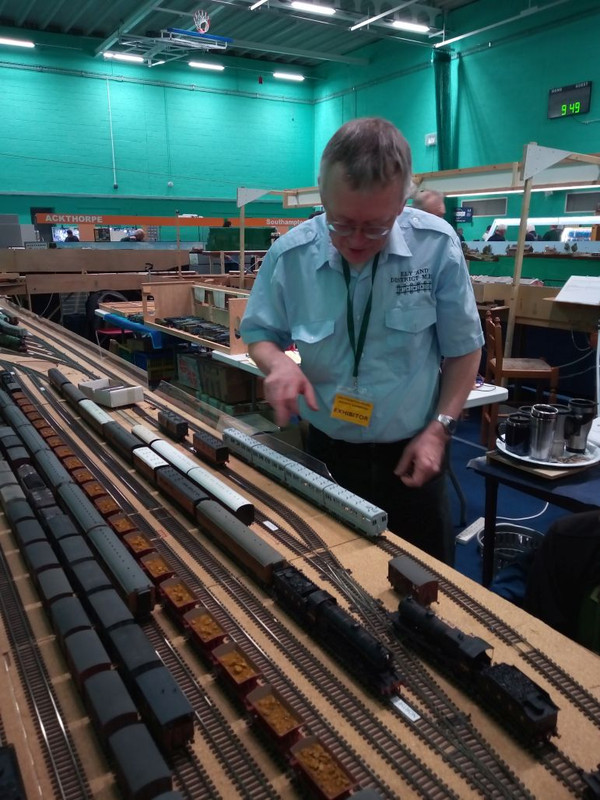 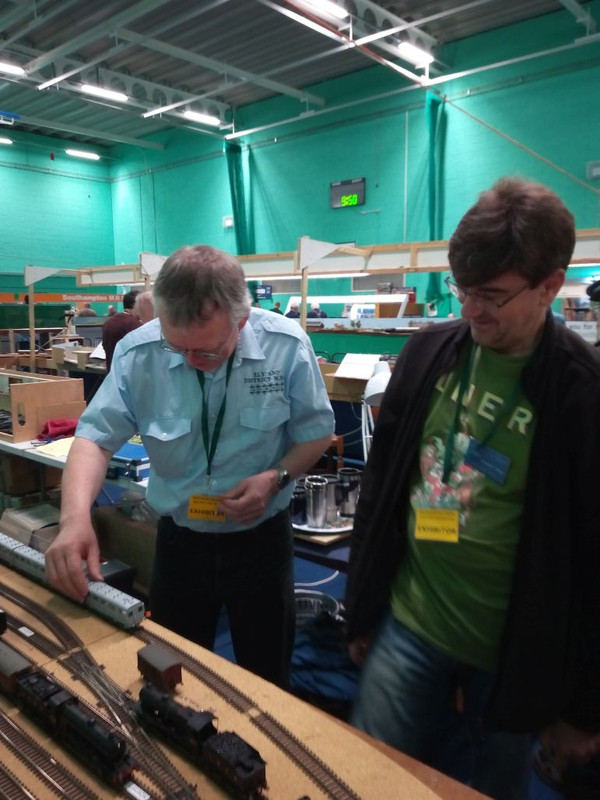 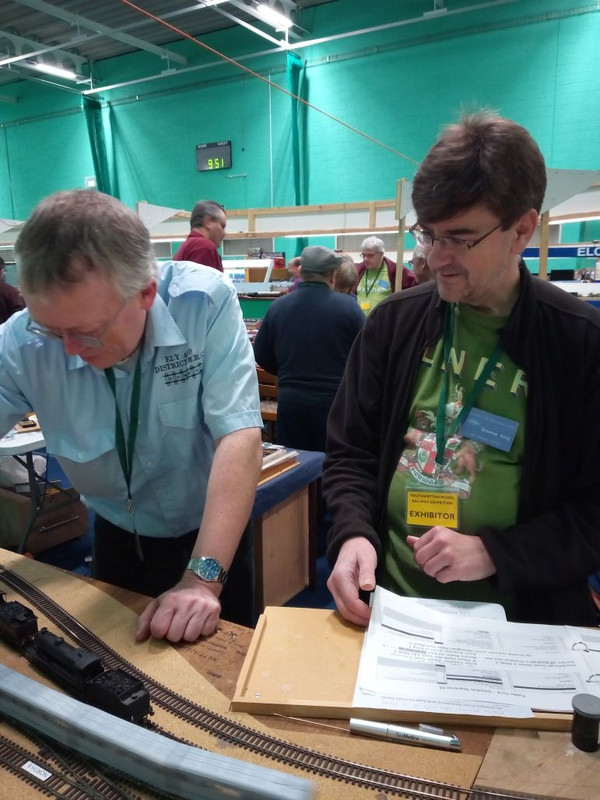 That includes intensive discussion and evaluation of the grey ghost. 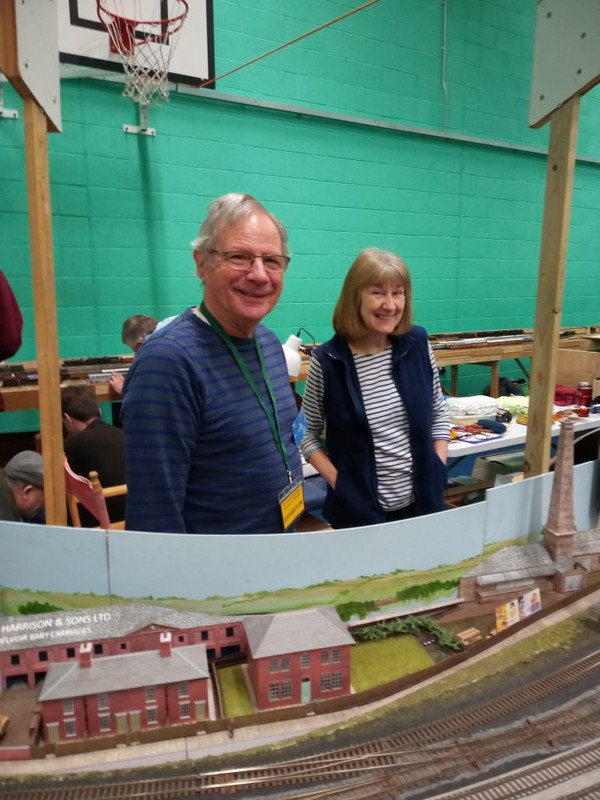 Barry and Jean having far too much fun. This was Barry's first weekend with us and remarkably he was still smiling when I dropped him off at the station on Sunday evening. 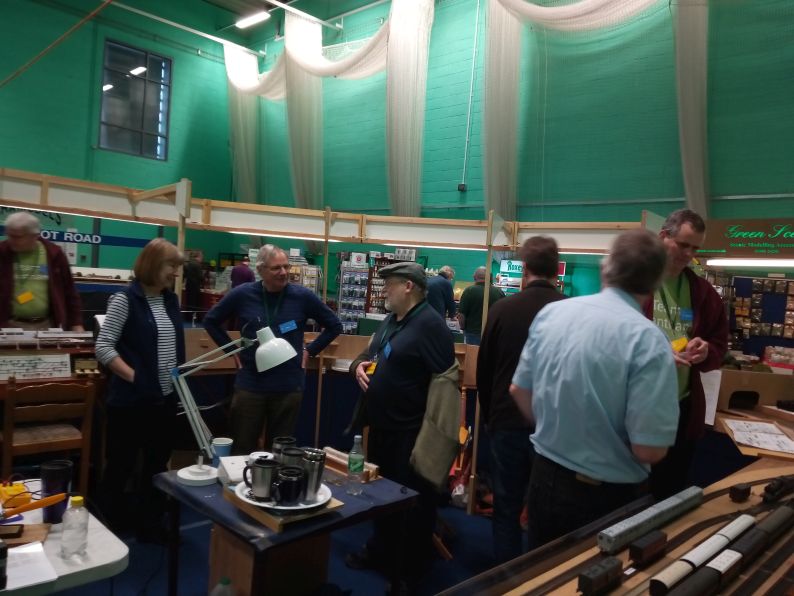 Almost the whole operating team on Sunday: Graham, Jean, Barry, Roy, Graeme, myself and Andrew. Paul and Tom, as we've seen, were busy at the South End.
Top

What a marvellous set of photos! I couldn't get to Southampton so thanks for posting them.
Be gentle! Returning to the hobby after more than 20 years away...
Top

Great photos and please make my May UK trip really special and tell me Grantham will be on show somewhere in the north between about the 18th - 26th.
Graeme Leary
Top

Sorry, Graeme, our next outing is Leeds in October.
Top

Ah well, maybe have to delay my return to the antipodes!
Graeme
Top
Post Reply
231 posts