Fabulous DVD, hugely enjoyable - thank you so much to everyone involved for making this available! Also immensely enjoyed seeing the layout at Ally Pally, the first time I've seen it live, rather than looking at pictures on the forum

Well, back to grim reality after a weekend back in in the 1930s... I expect I'll have caught up on my sleep just about in time for York.

Ally Pally is always an enjoyable weekend away in my experience, it's just a shame they couldn't have put it somewhere a bit more central. Nonetheless it will be memorable, if only for the fact that, if our statisticians are correct, we went right through the operating sequence in 2 hours 15 on Sunday. That's at least 30 minutes faster than we've ever managed before. It certainly felt like hell on wheels at the time.

So, some images for those who weren't there or have already blanked it from their minds. We did have the official photographer present, so there will be more and better images available on the 'Wright Writes' thread on RMWeb.

Setting up on Saturday: 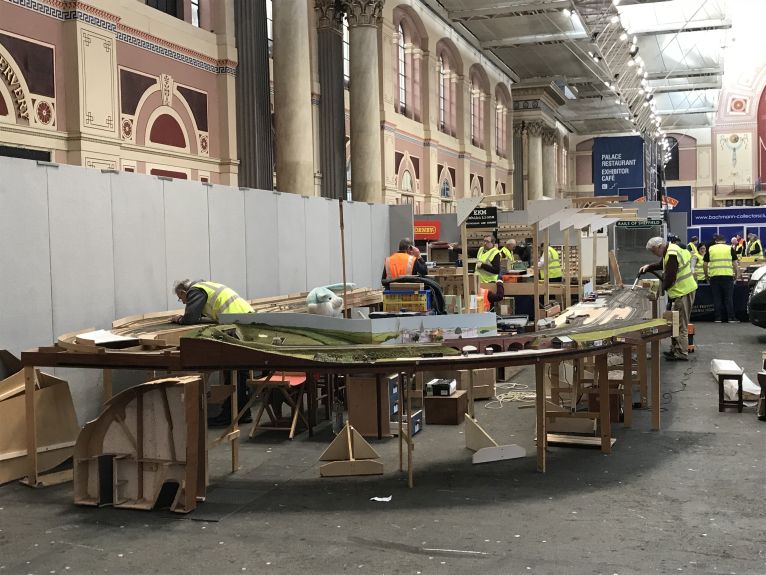 Either someone has stolen Tony's phone, or he's superglued his hand to his ear and Baz is telling him where the first aid post is. 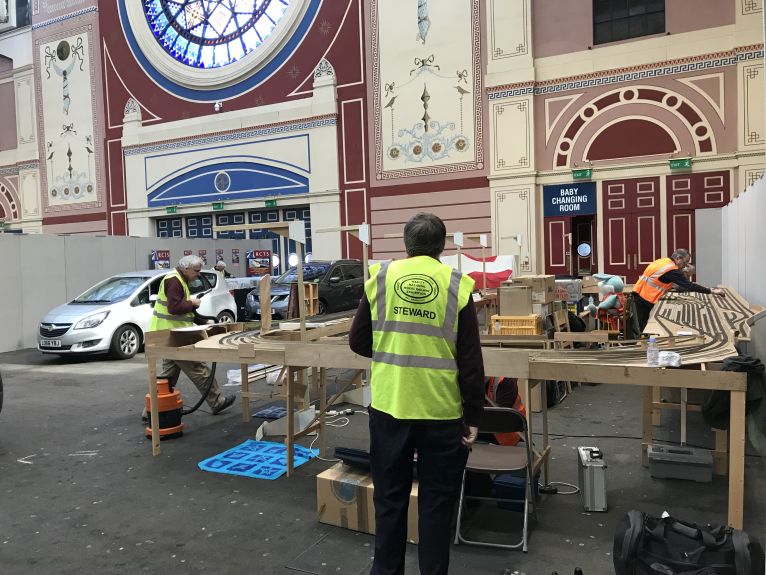 Red Leader looking very determined to hoover something up. 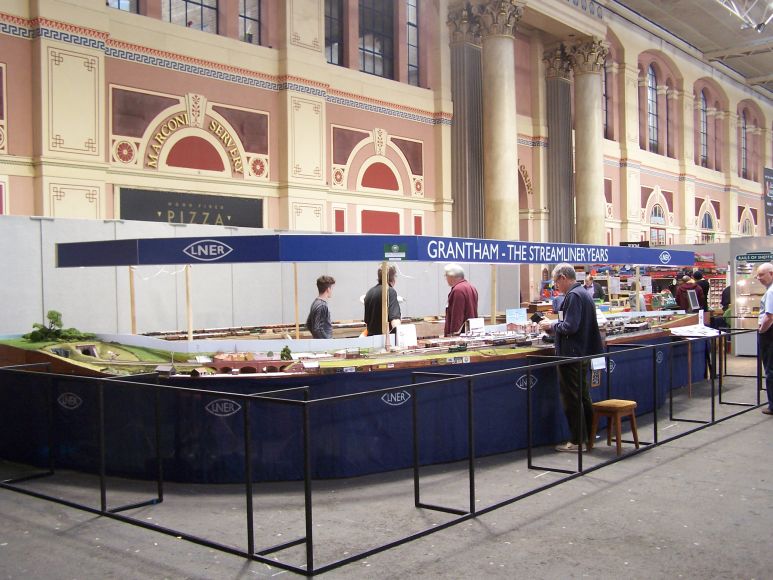 ... and now with its clothes on. This was before opening on Sunday. They all seem to be wondering where I've gone. 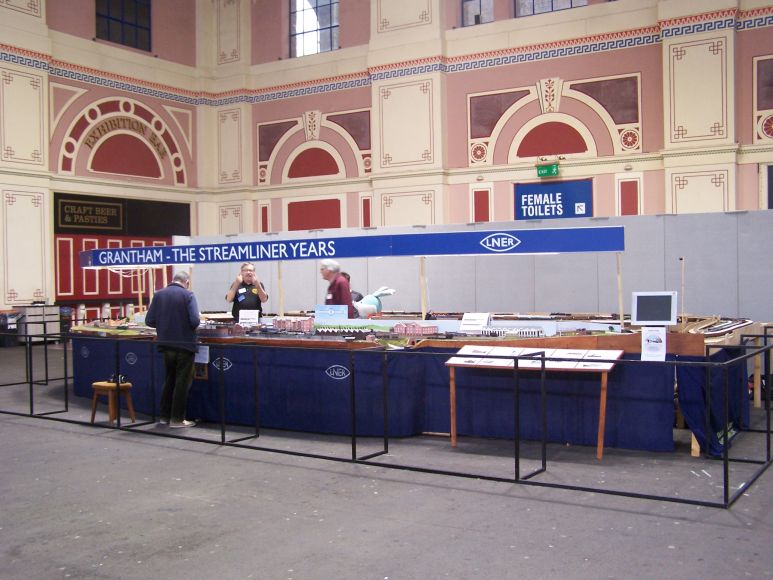 I'm afraid Barry hadn't had his medication yet. 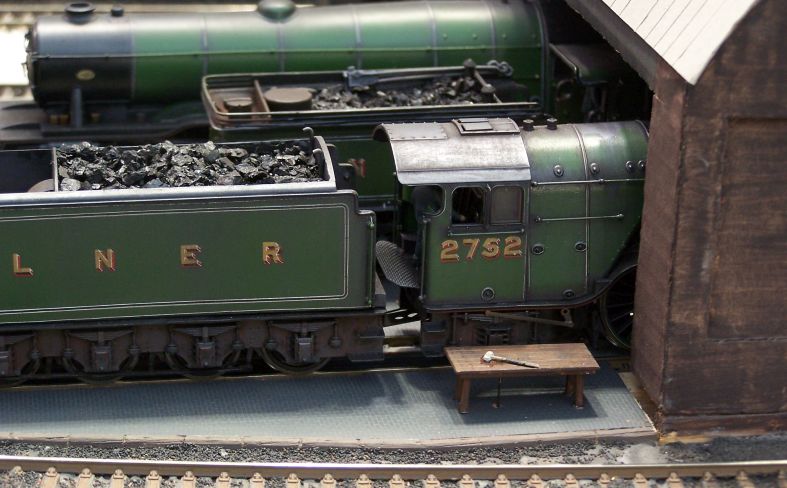 Small details are still being added. I hadn't noticed this bench outside the shed before. 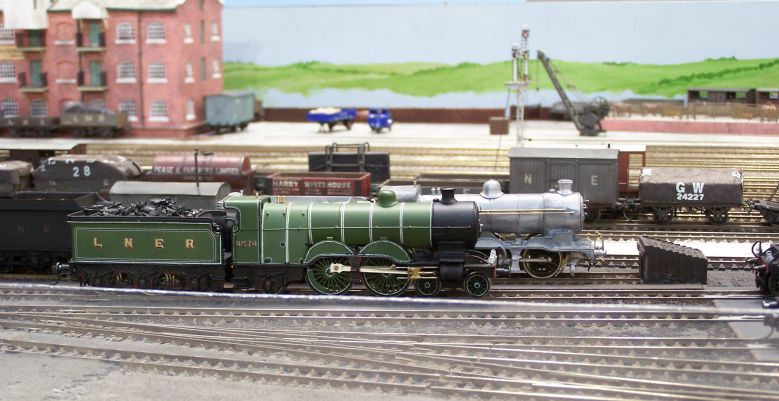 3275 (Ks) alongside Mr. Wright's new SEF J6 which dealt more than capably with the down minerals on Sunday. 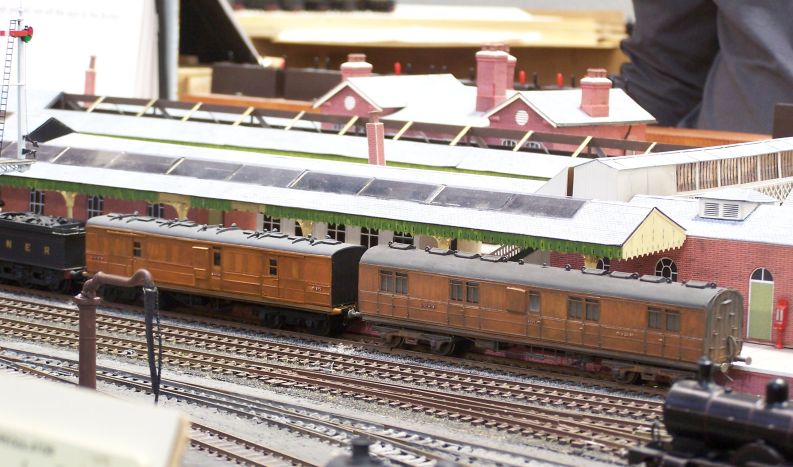 Two ex-GN vans which stood in as window dressing in the absence of Mr. King's Margate rebuilds.

Thank you for your kind comments on the DVD, Chas - I shall pass those on to Andy. I hope those who have ordered them and have yet to receive them are similarly pleased. I'm glad your trip to see the layout was worth it, too.
Last edited by jwealleans on Wed Aug 29, 2018 6:10 am, edited 1 time in total.
Top

The 8.30am from Grantham, the 'Mark Lane express', is it in the sequence? Arrive 10.28am Up. Short train and starting from Grantham.

Lots of interesting stuff in the Frank Giles note books.

Another Grantham running weekend and in addition to the usual reminding ourselves how it all works, a new move for us to practice. With the release of the Stirling single, a recreation of the publicity stunt used to launch the 1938 Flying Scotsman stock - journalists were loaded into a set of 6 wheelers representing the 1888 working, taken to Stevenage and then transferred to the new train to be whisked further north by 4498. We've moved the event to Grantham.

4498 arrives first with the new stock, then No. 1 pulls up alongside. After the hacks have been decanted into the new train, both depart towards the north.

4491 was about the closest we had numerically to 4498. As per the background instructions, the J54 is poised with a van which has been detached and is ready to be sent on down to London.

View from nearer the underpass. I'm speculating that the saggy carriage between No. 1 and the van is where they put the beer for the journalists.

No. 1. It really is a fine thing, they've done an excellent job. 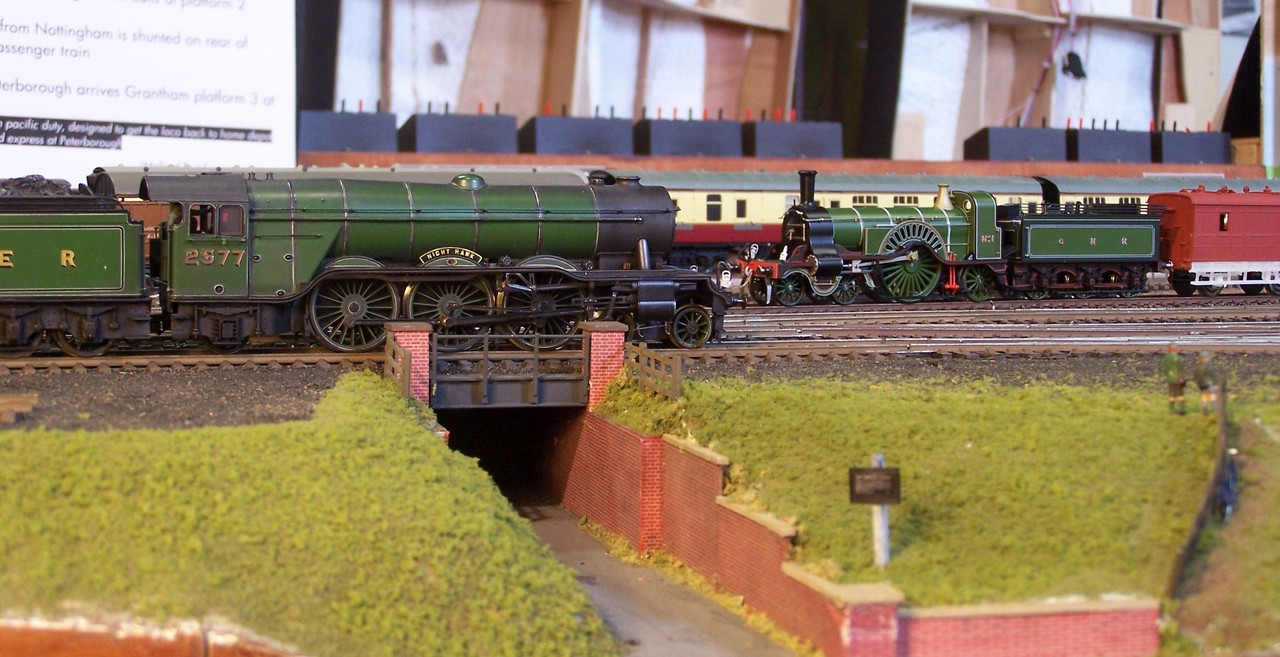 I think we may have to ask the Official photographer to recreate this one, but it seemed too good a shot to miss. Night Hawk was, I think, just coming on shed and so just needed to be pulled forward a short distance. Roughly 40 years of ECML haulage development.
Top

As a result of starting to get "all posh and pretentious" with our operating methods on Grantham, to the extent of trying to fit appropriate head code lamps to locos and tail lamps to at least some of the trains, a polite request was made of me to equip my "BTK" No 62790 with brake end lamp irons, so that it might not leave Teak Set 5 with a scruffy backside when said set loses a portion part way through the running sequence. Far be it from me to reject reasonable requests or to uncaringly disappoint fellow enthusiasts, so I decided to do something about it. What puzzled me however was that only the lack of lamp irons had been highlighted. The coach in question was no more than a repaint of an unmodified Margate Gresley-style BCK (hence the quotation marks above around BTK), with the brake end still having an open ended corridor connector complete with the strange, black-painted, non-LNER style internal door with two unexplained square holes, and the buffer heads were still oval - bar the one that was broken of course. Apart from the general shape of the trussing the underframe fittings were all wrong too, and then there was the trifling matter of the coach being 3 scale feet too short and still having the doors / panels / beading on the corridor side arranged as per a BCK...

Never mind, as nobody was complaining about the length or the panel layout, and I certainly did not have time to do a full reconstruction, I decided I could satisfy my conscience by means of some more limited improvements.

1. Moulded corridor connector sides drilled then pieces of staples pushed in, adjusted to shape, trimmed and super-glued to serve as lamp irons.
2. Black paper bellows made to fit within moulding, with slight tendency to push out a little, spot glued to the moulded inner door.
3. 0.010" black plasticard cut and scribed to represent a cover for the end of the corridor connector, and spot glued to the paper bellows.
4. Oval buffer heads filed back somewhat and capped with some dished, clipped-top round heads cut from 0.015" black plasticard.

5. Original moulded battery boxes, wrongly placed adjacent to the bogies rather than "amidships" on the underframe cropped off with side-cutters and a couple more pieces of black plasticard scribed to roughly the style of the outer faces of LNER battery boxes stuck in roughly the right place behind the central section of the trussing.

I couldn't fit proper LNER battery boxes because the trussing, like the whole coach, is too short in the vital area. I also decided that although the brake gear on the underframe is in diagonally opposite positions to where it all should be, as is the token representation of a dynamo, that would all have to stay as it is for now. Maybe we should offer modest prizes at shows to those viewers who manage to spot (without any prior hints) which coaches are wrong 'uns?
Most subjects, models and techniques covered in this thread are now listed in various categories on page1

Hey - we just attended another exhibition. A rather splendid LNER fest at Wakefield, sharing the hall as we did with none other than Copenhagen Fields. A few 'firsts' and notable others:

First exhibition appearance of Jonathan's magnificent recreation of the 1888 Flying Scotsman demonstration train with GNR No.1. Alongside is No.4498 and the 1938 Scotsman set, recreating the scene that actually took place at Stevenage on 30th June 1938.

The LNER 'top brass' (including Gresley himself) mingle on the platform next to the old timer.

Now safely ensconced in the new set, the two trains perform a parallel departure. We can now rightfully refer to the 1888 train as 'award winning' as Jonathan duly returned home with the 'best rolling stock in show' shield.

The events of another momentous day in LNER history, 6th March 1935 were also briefly recreated and captured for posterity. This was a Jonathan and Roy Mears collaboration, captured by John Smart's camera. In the background is another award winner - Paul Bolton's recreation of the distinctive Grantham granary building.

What could better 'Grantham -The Streamliner Years'? Totally mind-blowing to this colonial (and I hope it's out somewhere next August/September when my next trip is planned).
Graeme Leary
New Zealand
Top

Congratulations on winning those awards guys, I hope that you're all very pleased with your efforts. I'm very much looking forward to seeing the layout again in the early part of 2019!
Steve
Top

Graeme, I think our closest outing to those dates is Leeds, which is next October. We're then at Spalding in November (after Stevenage in January).
Top

It was great, a real treat to see Grantham...a lot nicer than the real thing.

Who put the dynamometer car the wrong way round behind Papyrus.........Mr Gresley would not be impressed.

You deserved the award Jonathan.
Top

Not to mention the question of duckets and the thorny one of lining....
Most subjects, models and techniques covered in this thread are now listed in various categories on page1

Lovely layout, reckon I could watch this layout all day.

Congratulations to Jonathon, on his 1938 recreation, love those old six wheelers.

jwealleans wrote: ↑
Tue Nov 20, 2018 11:45 am
Graeme, I think our closest outing to those dates is Leeds, which is next October. We're then at Spalding in November (after Stevenage in January).

As an alternative, we might be doing one of our periodic running sessions back at base, August-ish...?
'Robert' (the Devil)
(recreating pre-war Grantham in model form http://www.lner.info/forums/viewtopic.php?f=3&t=9076.
Forthcoming exhibition appearances: Leeds (Oct 2020), Peterborough (Dec 2020)
Top

Thank you for posting the pics on this site, the layout gets better every outing it seems.

Back to your earlier reply Jonathon. Are the dates for the October 2019 Leeds show you mention out yet? Trying to rearrange original plans to see if I can take it in.