This forum is for the discussion of all railway subjects that do not include the LNER, and its constituent companies.

Yes Waterloo to Portsmouth would have been a Lord Nelson(one eye)emu,very fast sometimes up in the 90's around Hindhead,Fratton always a good shed with the Terrier 0-6-0 tanks,from memory a round house that kept some of the future Clapham museum pieces, a few from there ended up @ Stratford for security reasons,also just before the Ivatts on ECS out of Waterloo were the ex Western Region panniers clicking away,Now thinking of DBL heading on the SR, I really was refering to failed locos being replaced, rather than some regions attaching a helper if short of steam,But their was the Up 'Night Ferry" possibly the Down also? a very heavy train with the Wagon-lits coaches+luggage vans usually headed by a combination of M/N& WC or either of these +a S.R.L1 4-4-0 & if being sent off the normal route to Victoria once the suburbs reached, stalled on a number of occasions on gradients after being checked by proceding EMU's which didnt help the operating office in peak commuter hours.
Top

The south eastern division of the southern region I find to be slightly more interesting than the south western division possibly because steam went earlier on the south eastern division during 1959-1961 because of electrification in Kent and therefore much less amateur film footage is available although one of my favourite southern region dvds is called Steam Through The Garden Of England and features Merchant Navy's, Battle of Britain's, Schools, Maunsell Ns & Us, Q1s, L class 4-4-0s & B.R. Standard 5s at locations such as Bricklayers Arms shed, New Cross, Bromley South, on Hildenborough bank, Tonbridge & Ashford as well as some of Kent's branch lines filmed by amateur railway line siders during the late 1950s and early 1960s. A little bit of film features the south central division around Brighton and Brighton shed which features the last Brighton Atlantic Beachy Head after it's last run down from Victoria to Brighton along with a 'clean' B.R. Standard 2-6-4 tank and Stroudley terrier 0-6-0 Box Hill all on Brighton shed during a open day.
Original start date of 2010 on the LNER forum and previously posted 4500+ posts.
Top

Hi Yes we/are on the same bandwagon there, I always liked also what I termed the "poor"side of the S.R.Holborn Viaduct/London Bridge/Charing Cross etc but even Victoria had a couple of sides/platforms I went straight too, to see the standard 4MT tanks,reaching these termini,was gained with My LT "Red Rover bus pass@2s/6d(child) (shorts never did look good on me aged 16 ha) dont think they made much profit on me!,but on arrival mid-morning-early afternoon,(always home before the peaks)@ these stations not much happened, very like Marylebone,not much fun @ London Bridge with only a train of empty newspaper vans to look @ & the stations taking on an almost church like silence whilst visting,so it was off to the sheds or a @ least a viewing point near them entry to Stewarts Lane impossible, just like Bricklayers Arms, however Norwood Junc.had a tow path down or near enough to view never got to Hither Green or Feltham,@ the time the "poor "relations of the S.R. seemed to have a lot more pre-grouping locos&feel than the ex.LSWR operations out of Waterloo.jj
Top

New episode (less related to big Pacifics but interesting nonetheless) is now out.

Tales from Tales From The Tube (with Jago Hazzard) 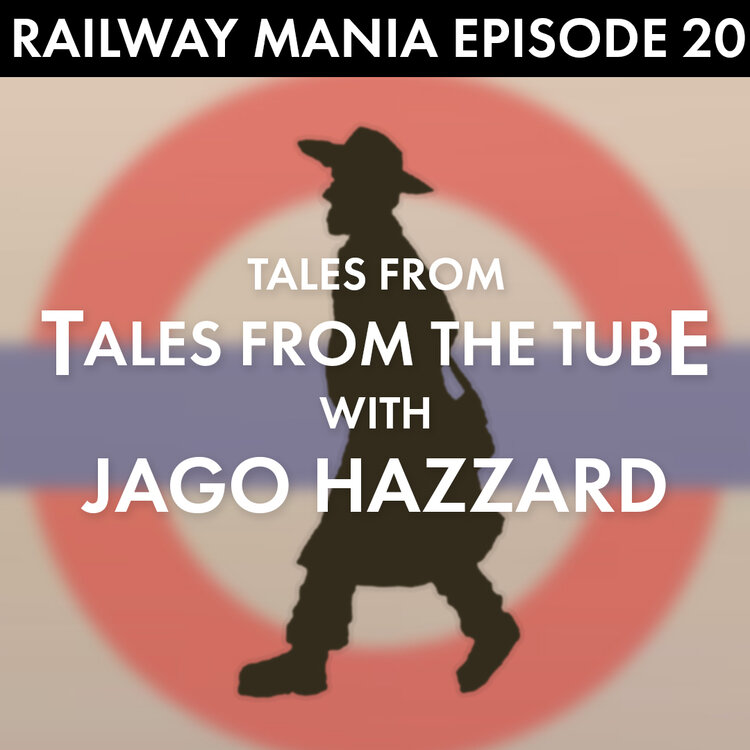 The Big Smoke is a city full of stories and our podcast guest for this episode is none other than Tom AKA Jago Hazzard, who has been making a hugely popular series of videos on London’s transport and history. ‘Tales from the Tube’ is a fascinating look at London’s Underground. We’re going to talk about where it began, how the stories come about and (of course) time travel.

Thanks to Tom for being a great guest!
Top

Ooh you lucky people! THREE episodes of the Railway Mania Podcast here for your delight and delectation

Ben Powell and Rob Rossington of The 009 Society join us for another look at narrow gauge modelling. They tell us about what the society can offer and the scope of what it covers (not limited to just 009 but 1:76 narrow gauge modelling in general). We also look at how the modelling scene is changing for narrow gauge as more and more manufacturers offer ready-to-run examples. Check out The 009 Society here: https://009society.com/ Thanks to Ben and Rob for coming on the podcast, and thank you to everyone who contributed photos and video, I really appreciate it!

EPISODE 22
ALL ABOARD!
WITH JULIAN HOLLAND


Our guest for this episode is the author of numerous books on trains and railways and whose latest publication 'All Aboard!' is now on sale, it's Julian Holland! We talk about the huge variety of railway-related topics covered in the book, and Julian's own experiences of train spotting during the 1950s and 1960s. Thanks so much to Julian for coming on the podcast. 'All Aboard: Remembering Britain's Railways' is published by Times Books and available from all major booksellers.

EPISODE 23
CLASH OF THE TINY
WITH CHRIS EDEN-GREEN

'Steam Locomotives in Profile' is back in 2021, in the form of a feature length special focusing on IMLEC, The 2021 International Model Locomotive Efficiency Competition. Model engineers from around the country came together to test the mettle of their creations in a head-to-head 3-day competition. Chris Eden-Green returns to the podcast to tell us about it.
Check out the IMLEC special here: