Actually I must admit, I've just gone and got a little impatient.

I'm at the stage where I would like to add the waterslide rivets, and in order to do that, I need a gloss surface. I have Railmatch Gloss varnish, which is a country mile up on Humbrol's, but the downside what I've got is enamel. my primer and top coats are acryllic, and whilst it is feasible to paint acryllic over enamel, it has to completely de-gas before you do.

So, the idea is that I've put the top coat of primer on, and the first couple of coats of Halfords Matt Black (which I am really happy with how it provides just the right amount of matt, and "blackness"). From this point on, I'll put the gloss on where transfers are to go (i.e. the splashers, the side tanks, and the bunker), to apply the rivets and transfers. if the rivets stand out, I'll paint them with enamel weathering powders (humbrol smoke, and black mixed probably), before sealing the whole thing with Railmatch Matt.

The impatience, is that I did not take any pics with the loco fully in primer grey. I'll snap some pics of it in black ones its dried and 'matted'

but overall, i'm quite happy with it!

Loco has been masked up, and a coat of gloss on the areas where the transfers are going onto.

There was a profound cock-up after putting the gloss coat on the Loco.

After finishing the S1, to a quality that I was happy with, it was put to the bottom of the spray booth to cure. I'd recently bought some spray which looked like it could be a good match for LNER green, and applied this to the 0-6-0 versions of LH&JC No.29, completely forgetting about the S1, and giving some of the unmasked areas a gentle coating of acrylic green- IDIOT.

Wiped this off as best I could with a rag and IPA, and managed to restore the S1 to somewhere like ready for a re-coat of acrylic black, giving it the weekend to dry before doing so, and finally, late last week, re-applying the gloss varnish.

Yesterday the transfers went on, as with the Q1, I've gone for the large British Railways insignia, rather than the small one these engines were actually fitted with, for largely the same rules as the Q1 (i.e. small crest is way too small for the huge slab sides of the S1, in pictures, it looks almost comical to me, and I also like the conspicuous large crest). As usual, the loco numbers were a bit of a struggle, but the crest went on a piece of cake. A couple of the numbers (the usual suspects, 6 and 9) have a tiny lift on the ends of the legs, so I'll apply decal fixing, or micro-sol to those to help stick them down. As I'll need the same for during the rivet application, i'll do both at the same time. 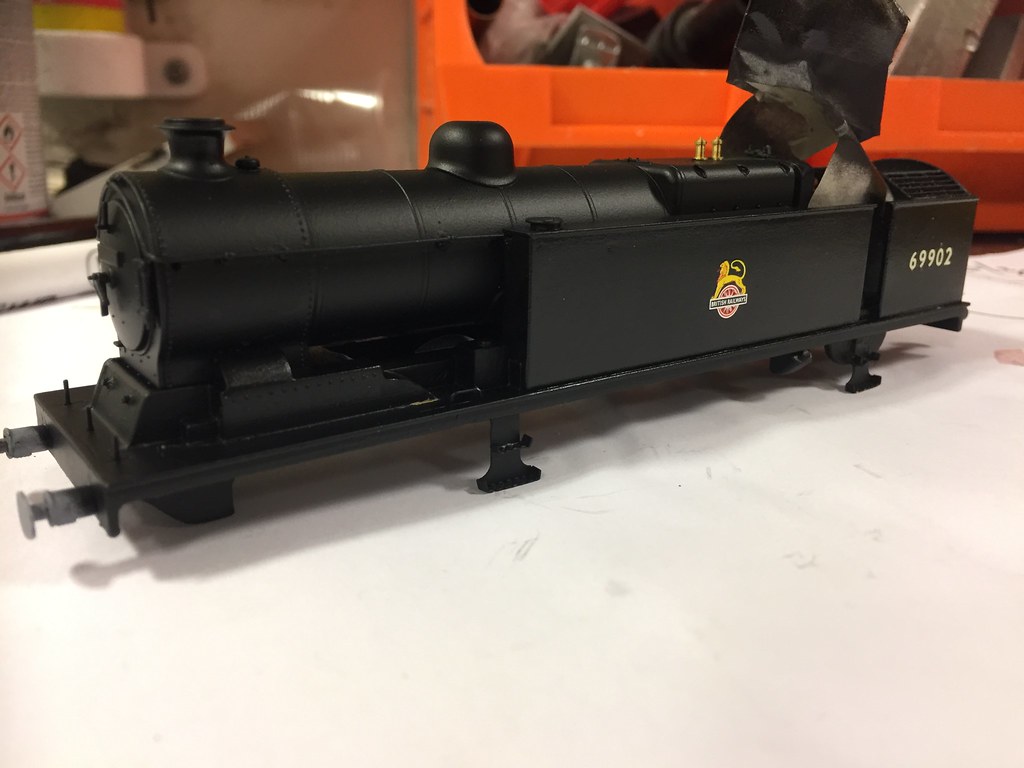 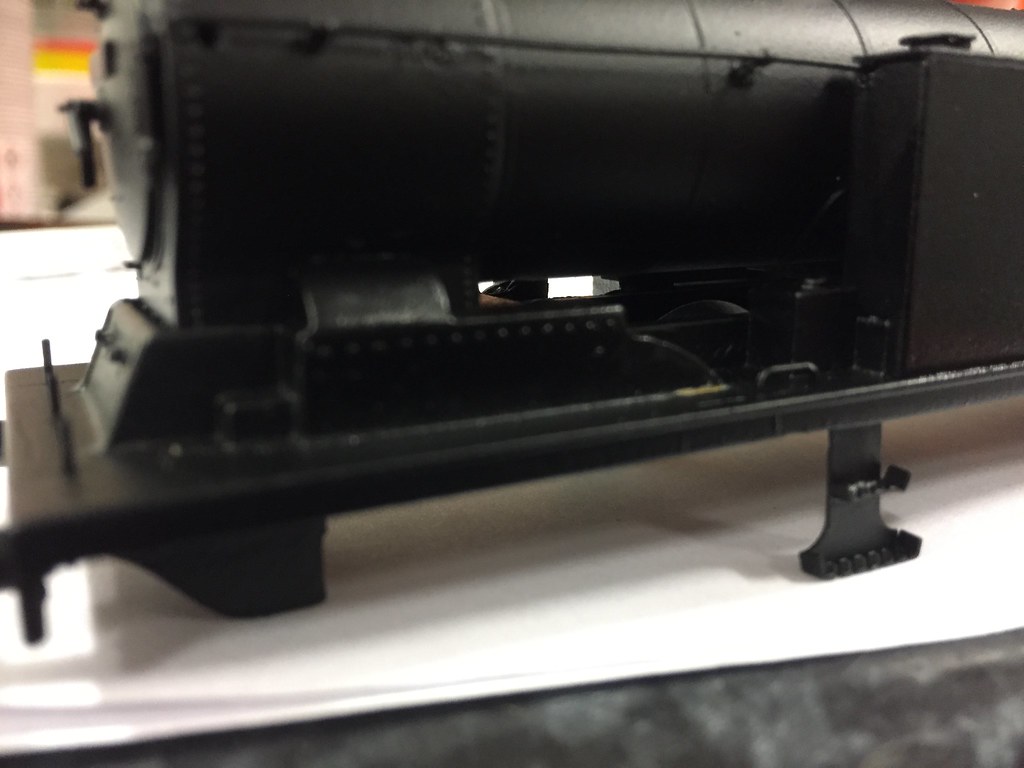 IMG_4099[1] by Paul Sterling, on Flickr
You can see the Archers Waterslide rivets here, they are fiddly to use, but watching the film dry in is a joy, a quick application of microsol, and jobs-a-guddun. 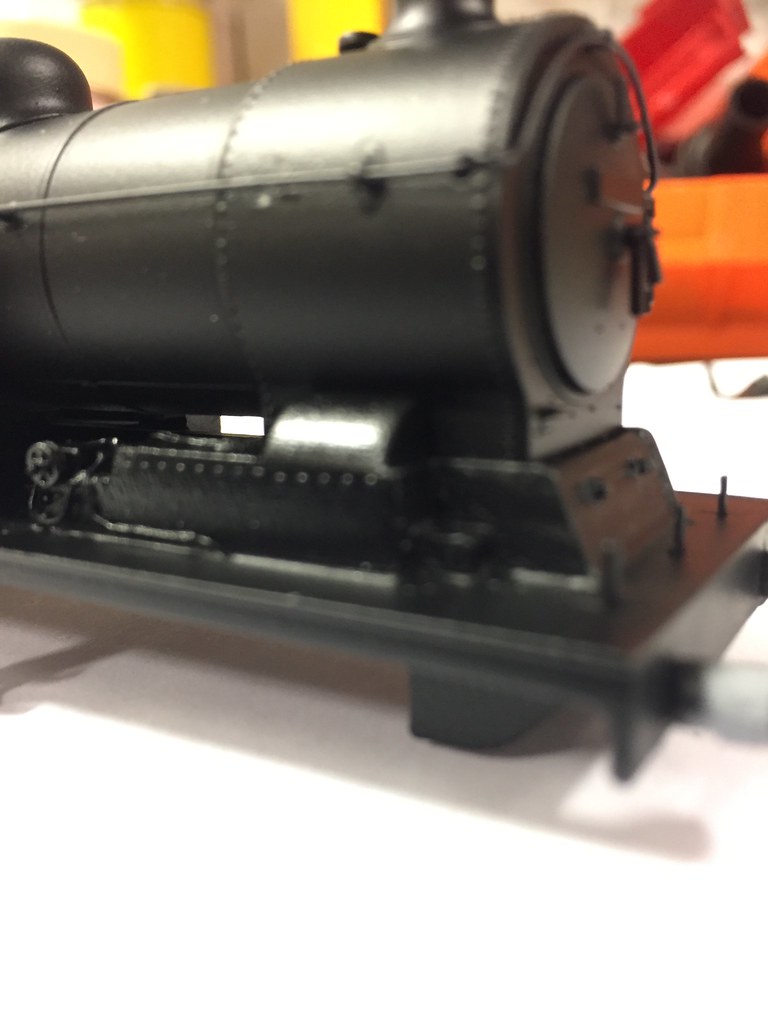 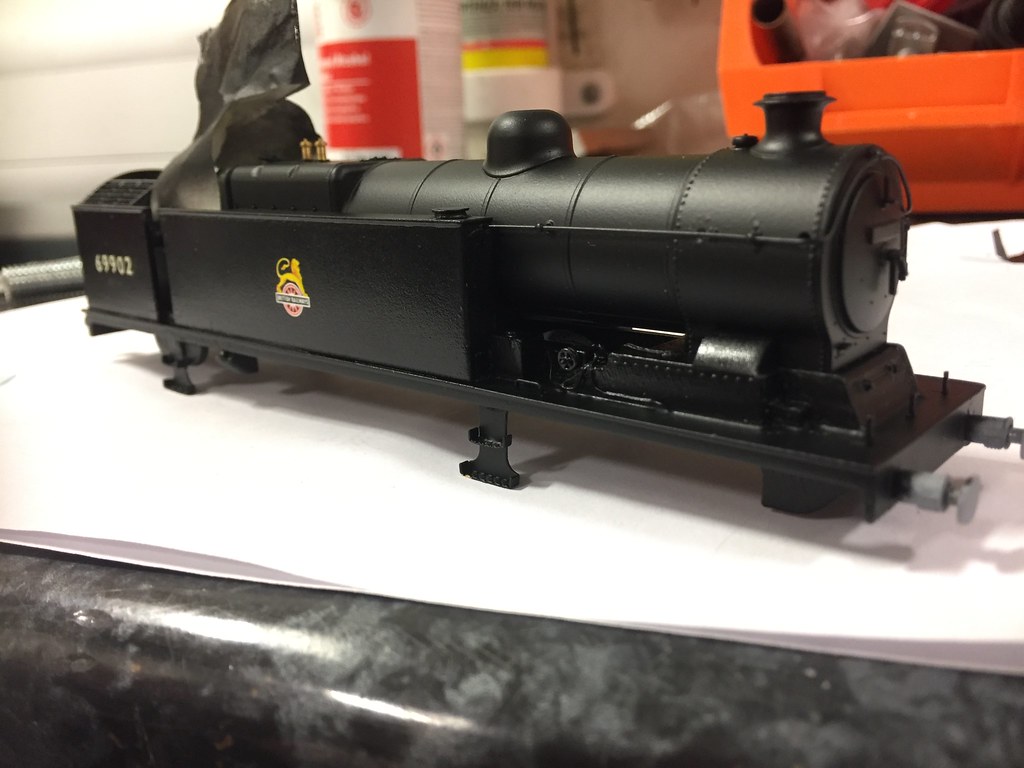 The bufferbeam is to rivet, cab to finish and then we're about there, I'm please I've managed with the rivets, it'll embolden me to have a go at them on No.29, which has loads!