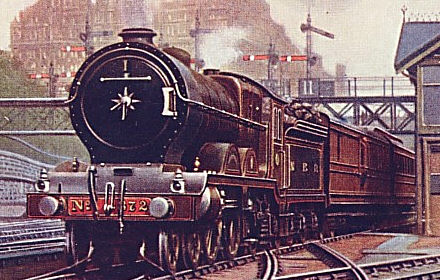 Attempting to compete against the Caledonian Railway, the North British Railway (NBR) decided to build new and heavier rolling stock in 1905. This stock required locomotives more powerful than the existing 4-4-0s, and Reid produced two proposals for 4-4-2s. A three cylinder compound was rejected, but a two cylinder simple expansion design was given the go ahead and fourteen were ordered. These were given the classification of Class H.

Reid has been criticised for producing a 4-4-2 design rather than a 4-6-0, but it must be remembered that these engines were intended for severely curved routes. Although the LNER would introduce the eight-coupled P2s for the line to Aberdeen, these required much more maintenance that similar types in other areas of the network. Cowlairs did produce drawings for a 4-6-0 design in 1907, and the NBR also ran trials with borrowed 4-6-0s including an LNWR Experiment Class locomotive. The NBR never did build a 4-6-0, and further Class H 4-4-2s were ordered in 1910 when more express passenger locomotives were required.

Unlike many other preceding NBR locomotives, the Class H Atlantics had outside cylinders. The boiler was large and included a Belpaire firebox - a unique feature for an NBR locomotive. A number of Great Central (GCR) characteristics were borrowed, such as the wheel spacing from the C4. The influence is thought to have been unofficial, and may have been due to collusion with the neighbouring North British Locomotive Co. that built a batch of C4s for the GCR.

The first batch of Class H locomotives entered service in 1906 and quickly caused concern within the NBR for their oscillations. H.A. Ivatt was asked to investigate. He gave the Atlantics a generally good report, but recommended that a speed limit of 55mph be imposed when descended steep grades, and an 'excess of reciprocating balance' should be removed. Other minor recommended modifications included reducing the cylinder diameter slightly, removing the piston tail rods, and lightening of the crossheads and connecting rods. This was not accepted by the NBR, and Raven was called in. Raven lavished praise on the locomotives, but recommended minor alterations to the piston valves and blastpipe. 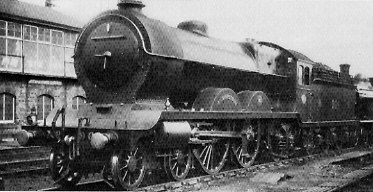 A second batch of six Class H locomotives were built in 1911, and were followed by a final batch of two in 1921. Fitting of 24-element Robinson superheaters started in 1915, and the final two were logically built with superheaters. With the introduction of superheaters, superheated locomotives kept their classification of Class H, whilst the saturated locomotives were re-classified as Class I. At Grouping in 1923, all of the original batch had been superheated, but the second batch still operated with saturated boilers. The superheated Class H became Class C11, whilst the saturated Class I became Class C10. All six saturated C10s had superheaters fitted between 1923 and 1925, and were reclassified as Class C11.

The NBR Atlantics were built without a front coupling. A shackle was fitted instead, and these were reputedly kept highly polished. Some carried three-link couplings after Grouping (1923), but the LNER eventually fitted screw couplings to all of the C11s.

All but three of the Atlantics were fitted with mechanical tablet exchange apparatus for use on the main line to Aberdeen. Three engines were fitted with Raven cab signalling apparatus for operating services on the East Coast main line to Newcastle. The Atlantics operated on main lines with many speed limits, and the LNER fitted speed indicators to all of the C11s to ensure strict adherence. Speed indicators of the Flaman, Teloc, Stone Deuta, and Smith types were fitted. It appears they were regularly interchanged, with different types being fitted at different times.

The first batch was allocated to Eastfield, St. Margaret's, and Carlisle. The Eastfield engines operated on the Glasgow to Edinburgh main line, and Glasgow sections that connected at Dalmeny with Edinburgh to Aberdeen expresses. The Eastfield Atlantics moved to Aberdeen in 1907, after the NBR and the Caledonian decided to cut wasteful competition on their Aberdeen routes. The St. Margaret's engines were used on expresses from Edinburgh to Carlisle, Aberdeen, and Perth. In about 1908, some of these engines moved to Haymarket and operated the Aberdeen services from there.

In 1923, the LNER performed trials on the Newcastle to Edinburgh stretch of the East Coast main line, comparing a C11 against a C1 and a C7. The C11 performed well against the other Atlantics, but by 1924 the first A1 Pacifics arrived at Haymarket and the C11s were no longer required to haul the main Newcastle services. However during the 1920s, they were occasionally used for Specials towards Newcastle, and as a backup for the A1s.

As more A1s became available, they were allocated to lesser main lines, further displacing the C11s. From 1928, they were seen on the Carlisle to Newcastle route. C11s operating Specials during the 1920s and 1930s were also sighted at such places as Stirling, Whitley Bay, York, and even Marylebone.

By 1933, many of the oldest boilers (circa. 1911) were due for replacement. The A1 and A3 Pacifics were starting to be used on the heaviest services, and the P2 Mikados were at the planning stage. As for secondary services, the D49 4-4-0s were already available. Hence it was considered very uneconomic to start replacing boilers with another twenty years of life, and withdrawals started. The entire class of C11s were withdrawn between 1933 and 1937. Initially there was a plan to preserve No. 9875, so this re-entered service for a while. It was withdrawn for repairs in November 1939, and was scrapped during the Second World War.

All of the C10s were rebuilt as C11s. The last C11 was withdrawn in 1939, and none survived into preservation.

Kit Connection with Kitman Studios sell whitemetal kits of both the C10 and C11 Atlantics for 4mm scale. These require motor, gears, and wheels to complete. Kitman Studios can also supply these kits ready built.

Gem Loco Kits have produced a whitemetal kit of the C10 for OO gauge (4mm scale). This is no longer available, but might be re-introduced in the future.

Thank you to Mike Morant Collection for the colour illustration of NBR No. 872 Auld Reekie.