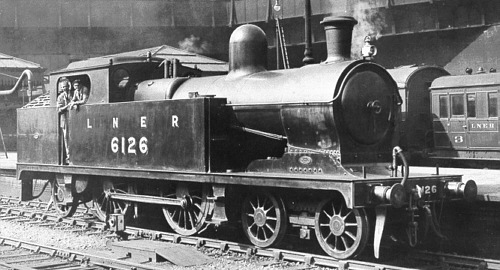 In 1907, the Great Central Railway (GCR) took delivery of twelve 4-4-2T locomotives from Beyer, Peacock & Co. to the same basic design of the 1903-5 Class 9L (LNER Class C13)., but with wider side tanks and larger bunkers. These were given the designation of Class 9L by the GCR, and Class C14 by the LNER.

The increase in the side tank width resulted in an increase of 375 gallons in water capacity. The engine platform width was increased from 8ft 6in to 8ft 9in, but the cab remained 7ft 11in wide. This resulted in the tanks projecting slightly wider than the cab, whilst the C13 had cab sides flush with the tank sides.

The back plate of the bunker was raised in a semi-circular fashion, increasing the bunker capacity. The other main difference between the C13s and the C14s was that the C14s had a cast iron casing enclosing the safety valve columns. As with the C13s, all of the C14s were built with saturated boilers.

In June 1914, No. 1122 received a superheated boiler. This would remain the only superheated C14 until after Grouping in 1923. No. 1122's boiler, which was secondhand, wore out in 1923, and was replaced with a saturated boiler. The LNER started a complete superheating programme in 1926, and all of the C14s were superheated by 1935.

Water pick-up gear was fitted from new, but was removed between 1932 and 1935. As with the C13s, tall GCR-profile domes and chimneys were replaced with shorter domes and chimneys. Superheated locomotives fitting the tall GCR loading gauge were classified C14/2, whilst superheated locomotives which fitted the lower LNER loading gauge were classified C14/3. These classifications were used from 1927 through to June 1937 when the last C14/2 was cut down to the LNER loading gauge.

The C14s were built for the Marylebone suburban services, and all twelve were delivered to Neasden shed. With the advent of the A5 4-6-2Ts, the C14s were moved away in 1912-13, to work stopping passenger services along the GCR main line. By 1922, eleven of the twelve C14s were grouped in the Nottingham area, whilst the twelfth was allocated to Woodford. These engines would remain at Nottingham for much of the 1920s, although there would be occasional allocations to Hitchin and Hatfield.

From 1934, four locomotives were allocated to Bury St. Edmunds for a short period before eight were allocated to Ipswich. Three of these would remain at Ipswich until 1950 when they were displaced by Thompson L1s. Others were displaced by the outbreak of war, and could be found at other sheds in East Anglia including Kings Lynn, Cambridge, and Norwich. In 1941, three made it into the West Riding, and two made it to Manchester. The West Riding locomotives performed well despite having only two driving axles, and were well-liked by the railwaymen.

After Nationalisation in 1948, N1 0-6-2Ts displaced C14s from the West Riding to Gorton. This resulted in the C14s working the Manchester suburban services alongside the C13s for much of the 1950s.

Following the introduction of diesel railcars to the Manchester area, withdrawals started in 1957. Three C14s were moved to Barnsley for short time, but the last C14 was withdrawn in January 1960.

None of the C14 Atlantics survived into preservation.

An O gauge (7mm scale) kit of the C14 is available from ACE Products.

Thank you to Malcolm Peirson for the photograph of LNER No. 6126.

Thank you to the P.H. Groom collection for permission to use the above photograph of BR No. 67445.