Although Drummond introduced the leading bogie to the North British Railway (NBR) with his D50 and D51 4-4-0Ts, his successors Holmes and Reid reverted to designs without leading bogies. This arrangement continued up to the introduction of Reid's G9 0-4-4T design in 1909. Reid eventually re-introduced the leading bogie with his Class M (LNER Class C15) design in 1911. A G9 boiler was used, but a radial trailing axle was added to greatly increase the coal and water capacity. A total of thirty locomotives were ordered - an unusually large number for an NBR passenger type. Also, the order was unusual because it was placed with the Yorkshire Engine Company - a company which had had few business dealings with the NBR. This led to the C15s being known officially as the "Yorkshire Tanks", or colloquially the "Yorkies".

New standardised boilers were fitted from 1921, using a design shared with the G9, J36, N14 and N15 classes. None of the C15s ever received superheating.

By Grouping (1923), the C15s were tending to work the shorter services and the heavier suburban services. Displaced by N2 0-6-2T and V1 2-6-2T types, the C15s were gradually scattered across the N.B. Section. From 1936, No. 9131 made it to Tweedmouth and technically was a member of the North Eastern Area. 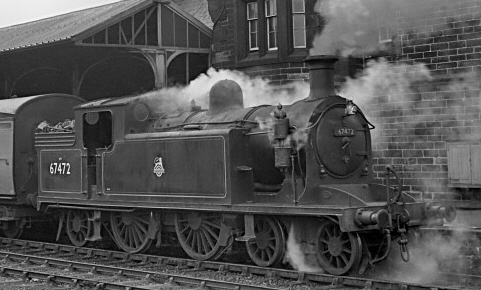 From 1935 to 1937, five of the C15s were fitted with drop gates to aid engine cleaning at Eastfield Shed.

After Nationalisation in 1948, many of the C15s were put into storage or converted for use as stationary boilers. Withdrawals started in 1953. In 1960, the two push-pull C15s working the Craigendoran and Arrochar branch were the last to be withdrawn when they were replaced by diesel railbuses.

None of the C15 Atlantics survived into preservation.

An etched nickel silver 4mm kit of the C15 is available from 52F Models.

Thank you to the Mike Morant Collection for the photograph of BR No. 67472.