Towards the end of the Nineteenth Century, the Great Northern Railway's (GNR) passenger locomotive stock was having difficulties keeping up with traffic developments. The single-wheelers of the day could not cope with the faster speeds and heavier loads that were being seen. With this background, on 1st November 1895 the GNR Board appointed Ivatt to replace Stirling. 75 years old, Stirling died ten days later. Although Ivatt's first locomotives were merely modifications of Stirling types (E1 2-4-0 and D4 4-4-0), it appears that he was considering the Atlantic 4-4-2 wheel arrangement before his appointment with the GNR.

He was given permission to build an experimental 4-4-2 in February 1897, and one year later No. 990 was completed. This was the first Atlantic 4-4-2 locomotive built in Britain, and quickly acquired the nickname of 'Klondike' (or 'Klondyke') after the 1896 Gold Rush in the Klondike region of the Yukon. In June 1900, No. 990 was named Henry Oakley, but the 'Klondike' name stuck and was used for the entire class throughout their existence.

The next development was No. 251 which featured a larger boiler. This would become the first of the LNER C1 class, but a further batch of ten 'Klondikes' were built in 1903.

Cracked frames were often repaired by replacing one side only. Over time, the frame design was modified slightly. From 1919, the frame depth near the cylinders was increased by 2.5in, and an additional row of bolts was often added. It was not unusual for this modified design to be seen on one side of a locomotive but not the other. In fact, the preserved No. 990 has this deeper frame on the right-hand side, but keeps the older frame design on the left-hand side!

The C2 Klondykes were initially distributed between the GNR's main line sheds. In 1905, they were allocated to Kings Cross, Peterborough, Grantham, and Doncaster sheds. Their early duties consisted of the heavier expresses on the GNR main line from London to York. These services were not very fast in the early 20th Century, and the C2s could keep up even if they tended to be slow when climbing uphill.

By 1913, all of the C1s were in service, and the Klondikes tended to be seen on the easier relief expresses. However, they were still called upon to pull some heavy trains during World War 1.

By 1920, the C1s had replaced many of the C2s at Grantham and Doncaster, with the displaced C2s joining the other main line sheds. By 1923, three were allocated to Cambridge to haul the London to Hitchin passenger services. In 1924, the ex-North Eastern Railway (NER) shed at Starbeck received a C2 to haul the Ripon to Doncaster leg of the Ripon to London service. In the following year, the NE area would receive more C2s for working between Leeds, Hull, Scarborough, and Newcastle. As well as pulling secondary passenger services, the C2s often pulled fish trains during the 1920s until these duties were taken over by K2s and K3s.

Throughout the 1920s and early 1930s, the C2 Klondikes would continue to pull secondary passenger services and deputise for C1s on faster services.

In 1935, the Klondikes were in need of new boilers, but were regarded as being too weak for the current traffic needs. Withdrawals commenced immediately, but five were still in service by 1939. Withdrawals were postponed for World War 2, but the last five engines were withdrawn in 1945. No. 3990 Henry Oakley has survived into preservation.

The following details are for the locomotives with piston valves, and 18-element Robinson superheaters. Those that still had slide valves, had 19x24in cylinders and a quoted tractive effort of 15,649 lb. 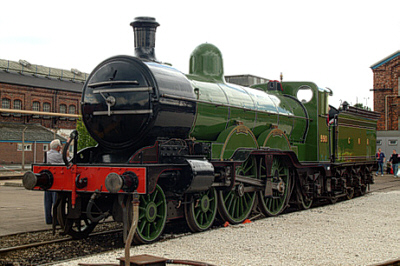 When No. 3990 Henry Oakley (GNR No. 990) was withdrawn at the end of 1937, it was restored to a GNR livery and placed in the York Museum in January 1938. In 1953, No. 990 was restored to running condition and ran a series of specials with C1 No. 251 celebrating the centenary of Doncaster Works. No. 990 was steamed again in 1975 for the Stockton & Darlington 150th anniversary celebrations, before entering the National Railway Museum in 1975 as a part of the National Collection. During the summer of 1977, Henry Oakley was loaned to the Keighley & Worth Valley Railway to haul passenger trains.

No. 3990 Henry Oakley is currently on loan to Bressingham Steam Museum and Gardens, where it is exhibited in a static condition.

Of the twenty two C2s, only the first C2 to be built carried a name. No. 990 Henry Oakley was named in June 1900, and carried the LNER number of 3990. It had both a superheater and piston valves fitted in December 1922.

Thank you to Malcolm Peirson for the photograph of LNER No. 3258.

Thank you to Geoff Byman FRPS for the photograph of the C2 No. 3990 Henry Oakley at the Doncaster 150 celebrations.