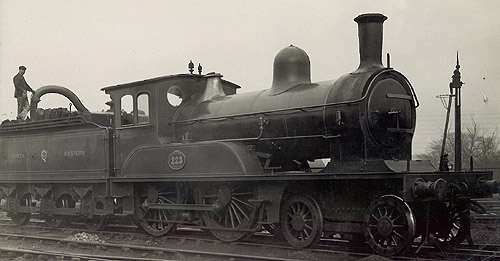 Fletcher complemented his epxress passenger designs with smaller passenger locomotives. for secondary duties. This practice was continued by T.W.Worsdell who built his Class G1 2-4-0 locomotives alongside his larger Class D, F, & F1 (LNER D22) locomotives. The Class G1 engines used a boiler that was very similar to the one used on the existing Class A 2-4-2T (LNER F8) locomotives. The wheels were 6in larger than the ones used on the F8s, but the cylinders were only 17in diameter. The cylinders used simple expansion, and were fitted with slide valves operated by Joy valve gear. A total of twenty D23s were built in two batches of ten each at Darlington in 1887-8.

The D23s were classed as "Class G1" leaving the classification of Class G available for a possible compound version. A compound version was never built and they were reclassified as Class G in 1914.

The Class G engines were rebuilt at 4-4-0s in 1900-4 by W.Worsdell. The opportunity was also taken to fit piston valves and Stephenson valve gear.

A second period of rebuilding occurred in 1913-6 when Raven fitted superheaters to the entire class. The first ten of the D23 superheaters were of the Robinson type, whilst Schmidt superheaters were used for at least eight of the remainder. Records are uncertain as regards the type of superheater fitted to the remaining two D23s. The superheaters required longer smokeboxes. It appears that some of the engines required new frames at this time, and seven D23s received extended Raven-designed frames. These frames could be recognised by their constant depth near the cylinders, and the addition of lifting holes in later years.

The D23s proved to be reliable locomotives, and in their early days they were known as "Waterburys" after a cheap contemporary watch that was noted for its reliability. Despite their secondary status, they managed to clock up the highest annual mileages of any T.W. Worsdell passenger type.

As 2-4-0s, most were allocated in the Hull / Leeds / Harrogate / Scarborough area, and this continued after their rebuilding as 4-4-0s. In 1907, they were allocated to Botanic Gardens (16), Starbeck (3), and York (1). At this time, the Hull engines were allocated to all but the heaviest passenger services from Hull.

None of the D23s survived into preservation.

Fozard-North Eastern Design sell a kit of the D23 for 7mm scale.