Pollitt developed his Class 11A (LNER D6) locomotives from the existing Class 11 (LNER D5) locomotives for use on the Great Central Railway's (GCR) London Extension. The most significant change was the replacement of slide valves with piston valves. These were located in horizontal steam chests beneath the cylinders. In order to locate the piston valves in this position, the cylinders were raised and inclined. The same firebox and boiler design was used on the D6s, although the number of tubes was decreased inline with evolving Gorton design principles. Larger 4,000 gallon tenders were fitted to allow for long non-stop runs on the London Extension.

A total of 33 D6s were built between 1897 and 1899 in three batches. The first thirteen were built at Gorton, as a trial batch of two in 1897, and eleven more in 1898. Due to the urgency of these locomotives, it was intended that ten of would be built at Beyer, Peacock & Co but this was thwarted by a strike at Beyer Peacock. The final batch of twenty locomotives were started at Gorton in 1898, but they were completed at Beyer Peacock in 1899 when the strike finally ended.

The only major rebuild or modification experienced by the D6s, was that of the fitting of new boilers and superheaters. From 1909, a number of the class received Robinson No. 3 standard boilers in their saturated form. The exact number is unknown, but three D6s have been photographed with the saturated boiler. By May 1912, superheated No. 3 boilers were being fitted instead. Twenty five locomotives had been fitted with superheated boilers when conversions ceased in 1916 due to wartime economies. Four more were fitted between 1918 and Grouping (1923). However, it was not until 1934 that the LNER finally converted the last of the D6s to superheating. The first D6 superheaters were to a 15-element Robinson pattern, but during 1915 the new boilers switched to the 18-element pattern which became standard. Most of the 15-element superheaters would be replaced with 18-element superheaters, although some were still in use at withdrawal. 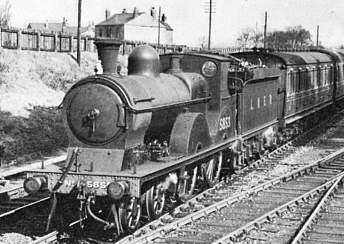 The D6s were built with the later (more elaborate) Parker stovepipe chimney. Robinson quickly replaced these with his own ornamental variety of chimney. These tended to crack, so the LNER replaced most of them with their own flowerpot chimney during the 1920s.

From 1912, the cab roofs were extended backwards to cover the entire footplate. At about this time, holes were drilled into the driving wheel splashers above the running plate, to give access to the coupling rod pins.

The original piston valves were to a design by Smith. These appear to have suffered from problems and a number of types were tried including Schmidt valves and an "American" design. Finally valves designed by Robinson were fitted from 1912. Although records are unclear, it is likely that these were standardised across the class.

After Grouping (1923), it was soon decided to reduce the height of the chimney and dome, to bring the D6s within the LNER Composite Loading Gauge. This proved unnecessary because the D6s never moved off the former-GCR routes. After 1927, the unconverted locomotives were given the sub-classification of D6/1, whilst the converted locomotives became D6/2.

All 33 D6s entered service before the London Extension had been completed, so they were initially allocated to the best express trains operated by the GCR's Gorton and Sheffield sheds. No. 861 headed the train to leave the new Marylebone Station when it was officially opened on 9th March 1899. Newspaper trains quickly became an important express service from Marylebone. The Manchester Guardian's stance on the Boer War was resulting in significant drops in circulation, and the London newspapers (led by the Daily Mail) saw a significant business opportunity in the Manchester area. They sought to get their morning newspapers to Manchester in time to grab a share of this market. These trains recorded fast times, including a doubtful 206 miles in 208 minutes including stops for the inaugural run. A better authenticated timing of 220 minutes, compares to an equivalent timetable schedule of 245 minutes which was only introduced in 1930!

The D6s ran all of the London Extension services during its first year of operation. They then shared it with six X4 singles. From 1902, the D6s tended to be replaced on the London Extension by new Robinson D9s. The displaced D6s moved to the Cheshire Lines where they made up the bulk of the motive power for the next thirty years. Smaller 3,080 gallon GCR tenders were fitted to most of the D6s after this move. Other tender swaps occurred, and at least two D6s finished their final years fitted with ex-J10 0-6-0 tenders.

Whilst based in the Cheshire area, the D6s still occasionally ran further afield. For example during 1918, they ran in pairs hauling American troop trains from Liverpool to Marylebone. It is thought that these troop trains were the last time that D6s were seen on the London Extension. Footage of one of these trains appears in the third part of the BBC series Dan Snow's History of Railways.

Three of the D6s were allocated to Lincoln, but these had moved to Retford and Mexborough by 1921. Just before Grouping (1923), all 33 were allocated to the Cheshire Area. Allocated to Trafford Park and Brunswick, they hauled virtually of the Liverpool to Manchester expresses. Some also hauled the Harwich Boat expresses between Manchester Central and Liverpool Central. Other allocations to Walton and Southport occurred during the late 1920s.

During their Cheshire days, the D6s acquired a strong reputation as a reliable locomotive that could maintain punctual timings. On a number of occasions, bookings had minutes trimmed off or extra stops inserted. It is telling that the D6s were capable of maintaining these tight timings on a regular basis.

The first withdrawals started in June 1930. As withdrawals continued, a number of D2s were allocated to the area as replacements. Nine D6s survived to the outbreak of World War 2. By this point, two D6s had been moved to Immingham to replace withdrawn D7s. The last D6 was withdrawn on 31st December 1947 - on the eve of Nationalisation.

The last D6 was withdrawn in 1947, and none survived into preservation.

DJH have sold a whitemetal kit of the D6 for OO gauge (4mm scale) but this is no longer available. The masters are reportedly damaged, and it will not be re-introduced. The photograph to the left is of the DJH kit finished as No. 5867 - the last D6 still running with a saturated boiler in 1928/9. No. 5867 was fitted with an LNER flower pot chimney sometime between 1923 and 1928, and the LNER's green livery was discontinued on the D6s after 1928.

Thank you to Malcolm Peirson for the works photograph of GCR No. 881.

Thank you to 'Colombo' from the forums for the photograph of the finished DJH D6 kit. This was built for the Historical Model Railway Society P4 layout based on the Cheshire Lines Committee in 1928/9. The layout is on permanent exhibition at their Museum and Study Centre at the Midland Railway Trust at Butterley.