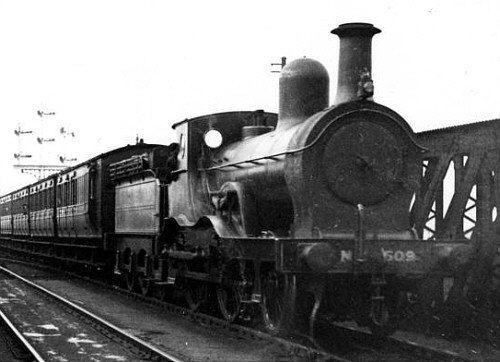 Parker built the three Class 6D (LNER E2) 2-4-0 locomotives in 1883 to haul Manchester Sheffield & Lincolnshire Railway (MS&LR, later GCR) express services between Manchester and Grantham. All three were built at Gorton Works. No. 79 was given a special finish for the Manchester Exhibition of 1883. In the end, the MS&LR and Kitsons shared a display at the exhibition and displayed MS&LR No. 561 (LNER Class D7) instead.

Coming just after the end of the Sacre double-framed era on the the MS&LR, the E2s had an unusual frame design. The coupled wheels had outside frames. Although the outside frames extended to the front of the locomotive, the leading wheels only had an inside frame.

Intended to replace existing outside cylinder 2-2-2s, the Class E2s were found to be unstable at speed due to the use of Webb radial axleboxes on the leading wheels. Three similar engines were built in 1888, and these replaced the axleboxes with a leading bogie to give a 4-4-0 wheel arrangement. These later engines became Class D8.

The E2s received one significant rebuilding. The E2s were built with round-topped fireboxes, but Robinson fitted his No. 1 standard Belpaire boiler between 1909 and 1915. This boiler was used on a number of the smaller GCR engines, including the J10 0-6-0s. The cab was also modified so that the spectacle glasses were raised above the corners of the larger Belpaire fireboxes.

When built, the E2s were allocated to their intended work hauling the King's Cross expresses between Manchester and Grantham. Within only a few years, their stability problems led to them being replaced by D8s followed by the Pollitt D5s and D6s. The E2s moved to secondary services. In 1893, Nos. 507 and 509 were allocated to Neepsend (Sheffield), and No. 506 was allocated to Brunswick shed (Liverpool). At Grouping (1923), all three were working in the Lincoln area. The LNER was quick to withdraw them, and the last E2 was withdrawn in March 1924.

None of the E2s survived into preservation.

I am not aware of any models of the E2 locomotives.

Thank you to Malcolm Peirson for the photograph of the E2 No. 509 as built with a round-topped firebox.