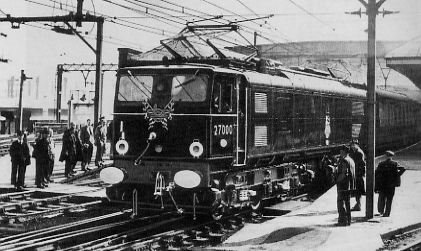 The original 1936 plan for the electrification of the Manchester, Sheffield and Wath line included nine express passenger locomotives, in addition to the mixed traffic EM1 Bo-Bo locomotives. The EM1s were designed first, and the only pre-war express passenger design known to have existed was submitted by the Swiss Locomotive and Machine Works, Winterthur in 1939. This was a 4-6-4 with a universal drive, 13ft wheelbase, and a total length of 55ft. Development work was interrupted by World War 2, and the final EM2 design that was built in 1953 bore no resemblance to the Swiss proposal. In fact, there was very little LNER influence in the final EM2 design, but it is included here for completeness.

The EM2 express passenger design was built with bodies that were similar to those on the existing EM1s, but stretched to accommodate a Co-Co chassis. The six-wheeled bogies of the Co-Co design were based on those used in the London Midland Scotland (LMS) diesel/electric Nos. 10000-1. Unlike the EM1 bogies, these bogies were not coupled together. The drawgear and buffers were also moved from the bogies to the body. These changes resulted in the haulage forces being transmitted through the body, resulting in a smoother ride. Oval head buffers, and Timken roller bearings were also fitted. For coach heating, all seven EM2s were fitted with Bastian & Allen steam generators of the same type fitted to many of the EM1s

Each axle was connected to a traction motor through single reduction 17:64 gearing. The traction motors were rated at 460hp and provided with air cooling. Two of the three motors on each bogie were permanently connected in series. This allowed for three possible parallel/series arrangements for speed. All six motors were connected in series for starting. For intermediate speeds, they would be connected in two parallel circuits of three. For higher speeds, they would be connected as three parallel circuits of two. In common with the EM1s, the EM2s were fitted with regenerative braking. However, rheostatic braking was never fitted to the EM2s.

With a smoother ride and a higher continuous power, the EM2s were clearly intended for express passenger work. However, it is unclear why 29 higher speed passenger locomotives were required for a line that was only 41 miles long. In November 1950, the order was cut to seven locomotives after the British Railway Executive ordered 'drastic economies' where possible. All seven locomotives were built in 1953-4. Bodies, bogies, and mechanical parts were assembled at Gorton, and then sent to Metropolitan Vickers at Dukinfield for traction motors and electrical equipment.

Performance tests of both the EM1s and the EM2s were performed in February-March 1955, to test that they met contract specifications. The EM2s generally performed well, although there were problems with the sanding gear in poor weather conditions. The EM2s also suffered from weight transfer and slip problems when accelerating. The EM1s were plagued with these problems due to their Bo-Bo design, so it is perhaps surprising that the Co-Co EM2s also suffered from them. The EM1s were fitted with a 'weight transfer' switch which reduced the current on the leading motors of each bogie, and hence reduced the chance of a slip. These switches were not considered necessary on the EM2s and were not fitted. Unfortunately, practice showed that the lack of a weight transfer switch put the EM2s at a distinct disadvantage on goods train workings. 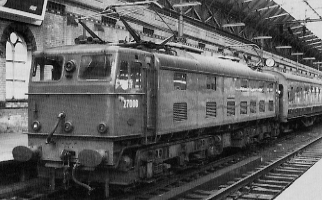 Although little information has been published, it appears that the Woodhead route did not provide any difficulties for the EM2s. There is a record of No. 27001 hauling eight bogies and a van (285 tons gross) at a steady 60-62mph up the 1in 132-120-131 grade from Sheffield to Pennistone. The 5.9 miles between Wadsley Bridge to Wortley taking only 5 minutes 42 seconds.

By 1960, the speed limit on the Manchester, Sheffield and Wath line had dropped from 65mph to to 60mph. With these lower speeds, the EM2's advantage over the EM1 was deemed insufficient to justify their existence. All seven locomotives were taken out of regular service on 2nd March 1968, and officially withdrawn in October 1968. By coincidence, they were given the new classification of Class 77 in March 1968. On 20th August 1969, No. E27002 worked the 1Z36 11am Reddish Depot to Sheffield Victoria service with five coaches. With authority to exceed the line speed on a number of sections, No. E27002 reached 75mph on at least three occasions and 80mph on the return journey near Crowden. 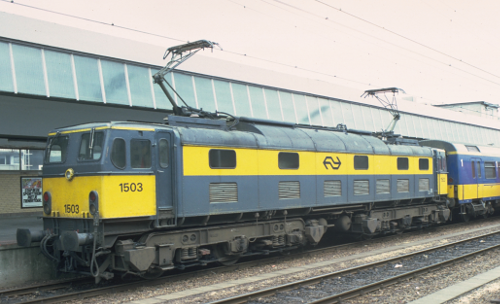 In September 1969, all seven were sold to the Netherlands State Railways (N.V. Nederlandse Spoorwegen). No. 27005 was broken up and used for bogie spares. The remaining six locomotives entered service in 1970-1 after extensive modifications for the NS operations. The NS also managed to get some good performances out of the EM2s, and maximum speeds of 83mph and 86mph were recorded on scheduled trains in 1974. Average NS mileages were 2.5 million miles per locomotive, compared to only 800,000 in England.

The NS purchased the EM2s with an expected future life of ten years. In reality, they exceeded this figure and survived until June 1986 - outliving their EM1 / Class 76 cousins. One has been preserved in the Netherlands and two have returned to the UK for preservation (see below).

A ready to run OO model of the Class 77 has been produced exlucsively by Heljan for Olivia's Trains.

The EM2s were given names from Greek mythology - continuing the theme set by the last twelve EM1s.

Thank you to Simon Smiler of London-Railfan.info for the photograph of No. 1503 in the Netherlands.