Sir Hugh Reid of the North British started his steam turbine experiments in 1910 with the Reid-Ramsey Steam Turbine Electric Locomotive. This was the first turbine locomotive built in Britain. A steam turbine has a theoretical efficiency much higher than that of a 'Watt' reciprocal steam engine. Unfortunately these efficiencies are only gained when the turbine vents into a near vacuum, and when it is running at high speed. The near vacuum was achieved by using a large condenser positioned at the front of the locomotive. The high speeds were handled by using an electrical transmission. Although contemporary reports talk of trials in a positive light, this locomotive never appears to have progressed beyond preliminary trials. 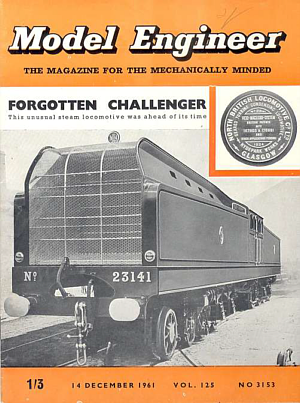 The Reid-Ramsey locomotive was eventually rebuilt in (or just before) 1924. Electrical transmission would have been a pioneering concept in 1910, and it appears to have been the cause of many problems because the rebuild replaced it with a mechanical (geared) transmission. The frames, bogies, and boiler were re-used in the rebuild to produce a locomotive with a 4-4-0+0-4-4 wheel arrangement.

Although some accounts describe two turbines per bogie - one per direction, other accounts describe a turbine consisting of three blade rings for high pressure steam forward, low pressure steam forward, and reverse. This latter arrangement is described in the Pathe film (see below). The high pressure blade ring ('turbine') was closest to the boiler in order to reduce heat losses. As with a compound reciprocating engine, the high pressure turbine fed into the low pressure turbine. This then fed into the adjacent condenser (at the front). The turbine(s) were then connected to the wheels using a two stage gear box.

To maximise airflow, the condenser continued to be mounted at the front of the locomotive. This was of an air-cooled evaporative type that was assisted with a steam-turbine driven fan. This arrangement probably worked well in forward motion, but the condenser cooling would have probably been very poor when running in reverse. With the condenser at the front, the boiler (and chimney) were located at the back. The cab was positioned in the middle. Due to the lack of a blast pipe, a fan was also located in the large chimney to provide a fire box draught.

The rebuilt locomotive first appears at the British Empire Exhibition at Wembley in 1924. It may not have been complete at this stage because trials do not appear to have started until 1926. Recorded trials operated between Glasgow and Edinburgh from March 1926 to April 1927. The initial trial failed with problems in the condenser pumps, but railway officials did comment that there was an "almost entire absence of vibration, oscillation, and rail pounding". A second trial suffered with axlebox problems followed by a turbine failure. There is some doubt as to whether it ever ran again after this. The Reid-MacLeod stood at the back of the North British Locomotive Works until it was finally scrapped in about 1940. 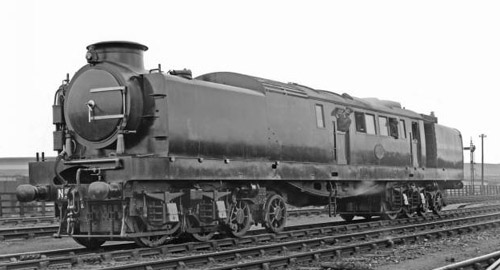 At first sight, it appears the Reid-MacLeod was quickly abandoned with only a few trials. Details are sketchy and it is possible that there were further problems and trials which have not been recorded. One major problem involved the type of work that it could do. The turbine worked best at continuous high speed. This would have suited an express locomotive, but the total power of 1000 hp would have been insufficient. The turbine wasted large quantities of water at start up, so it would have been unsuitable for stopping trains or yard work. It may have performed better with long distance slow freight trains, but adhesion may have been a problem. Reverse-running performance was probably very poor, and the whole arrangement (and especially ancillary equipment) was probably vulnerable to vibration, rough track, and soot that were found in contemporary railway operations. 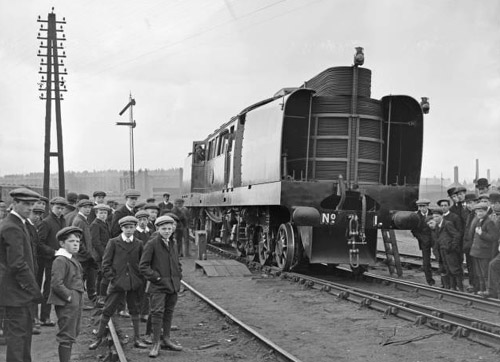 The Reid-MacLeod steam turbine was scrapped in about 1940. 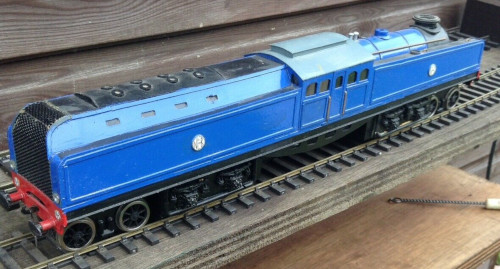 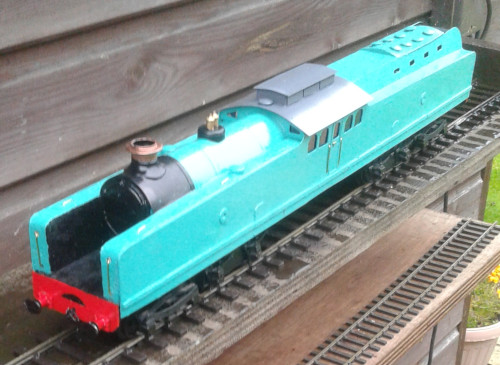 I am not aware of any kits or ready-to-run models of the Reid-MacLeod steam turbine in any scale.

John Perkin has built models for both Gauge O (1:45) and Gauge 1. Both are pictured.

British Pathe have a 9 minute film of the Reid-Macleod steam turbine locomotive at the British Empire Exhibition.

Thank you to Mike Morant for the photograph of the Reid-MacLeod Steam Turbine at Springburn on 3rd August 1926.

Thank you to Malcolm Peirson for the cover image of Model Engineer, 14th Dec. 1961.

Thank you to Alan Soward for some useful explanations of railway turbine operations, especially relating to the Pathe film.

Thank you to John Perkin for the photographs of his Gauge O and Gauge 1 models of the steam turbine.