The Colne Valley & Halstead Railway (CV&HR) became a part of the LNER on 1st July 1923, and brought with it the unserviceable CVHR No. 1 and these three locomotives. Nos. 2 and 3 were built by Hawthorn, Leslie & Co. in 1887 to the specifications of George Copus, then General Manager. No. 4 was built seven years later in 1894. Originally, all three ran with their works numbers and were named "Halstead", "Colne", and "Hedingham" respectively. In about 1902, the works numbers were replaced with the CV&HR numbers 2, 3, & 4; and the nameplates had been removed before their entered LNER ownership.

Between 1896 and 1903, all three were given new boilers. Both the original and the new boilers were built from "barrels" connected by rings. The original boilers had three rings with the dome on the centre ring, whilst the new boilers had two rings with the dome on the front ring. All three locomotives were originally fitted with stovepipe chimneys, but copper-capped chimneys were substituted at a later date. As overhauls were usually performed by the Great Eastern Railway (GER) at Stratford, all three acquired occasional GER parts such as safety valve casings, and dome covers.

These engines worked the CV&HR, pulling passenger trains from Haverhill to Chappell. At Chappell, through coaches to Colchester were attached to GER trains. After LNER ownership, these locomotives were gradually replaced by F7 and J65 locomotives. The last F9, No. 8312, was withdrawn in 1930.

These are the technical details of the three F9s when they entered LNER ownership with the two-ring boilers. From before 1923, No. 8312 ran with safety valves at 150psi. These were set back to 140psi in 1927.

The last F9 was withdrawn in 1930, and none survived into preservation. However, the CV&HR has re-opened as a preserved railway!

I am not aware of any kits or ready-to-run models of the F9s in any scale. However, Terence C Woodward has built a 5inch gauge model, show below: 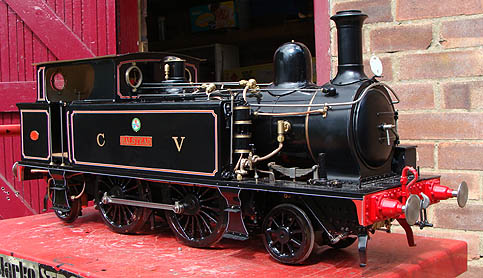 No. 4 was withdrawn in 1923, before it could receive an LNER number. The other two locomotives received their LNER numbers in 1924.