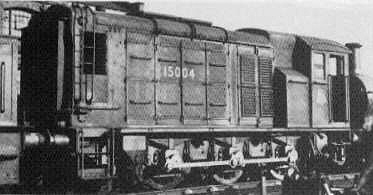 Shortly after the four DES1 engines were completed, the construction of a fifth engine was authorised. Brush supplied the diesel-electric system, rather than English Electric (who had worked on the DES1s). This change can be explained by the fact that the LNER Chairman was Sir Ronald Matthews, who was also Chairman of Brush at that time.

It was completed by November 1947, and was reclassified with the BR classification of DEJ2 in October 1954. Numbered 8004 by the LNER, the DES2 never actually carried this number. It became BR No. 15004 in May 1949. It worked at a number of yards, including Stratford and Whitemoor. During 1951 it ran trails pulling short freight trains in the London area. Afterwards, it worked at Woodford, and then New England before being withdrawn in 1962.

The main difference from the DES1s was that the engine was slightly more powerful diesel engine which was of a four-cylinder two-stroke, compared to DES1's six-cylinder four-stroke type.

The DES2 diesel shunter did not survive into preservation, although a number of BR 0-6-0 diesel shunters with similar bodies and designs do survive.

I am not aware of any models of the DES2 in any scale, although it should be relatively easy to modify a Class 08 or similar shunter.