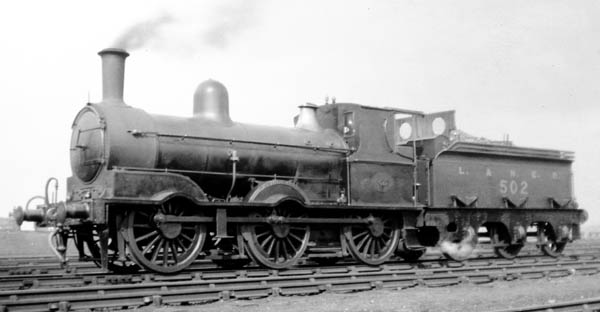 Fletcher operated the North Eastern Railway (NER) locomotive department with what appeared to be a 'loose' management style, and his locomotives showed very little standardisation. This management style was probably beneficial immediately after the Stockton & Darlington merger, but the lack of standardisation was beginning to become a major problem for the growing NER when he retired. Fletcher's successor was McDonnell, who became the new Locomotive Superintendent in 1882. The NER Directors almost certainly chose McDonnell due to his standardisation success at Inchichore on the Great Southern & Western Railway (GS&WR) of Ireland. McDonnell clearly disliked the chaos and diversity present on the NER. After existing orders were completed, he quickly initiated a reorganisation plan and started on two standard designs. These were the '38' Class 4-4-0 express passenger design, and the '59' Class (LNER J22) 0-6-0 mixed traffic design.

The last '398' was finished in February 1883, and a start was made on the first J22. This quickly appeared in September 1883. A total of 44 J22s were built between 1883 and 1885. The first 32 were built in four batches of eight at Darlington. The last four were delayed whilst the urgent Tennant E5 2-4-0s were built. The reorganisation of the Darlington and Gateshead works resulted in reduced output, and the last twelve were built by Robert Stephenson & Co.

McDonnell resigned in 1884 before the Stephenson locomotives were delivered. The existing J22s had already proved unsatisfactory in a number of respects and the NER paid for various alterations. The frames were slightly longer and had a 6in overhang at the front end. The Stephenson boilers also had 193 tubes, compared to 190 in the original Darlington engines. The tenders were also different. The Darlington J22s had a new tender design similar to a tender that McDonnell had designed for the GS&WR. The Stephenson J22s had tenders similar to those built for the '38' Class. Most examples of both tender types had coal rails fitted at a later date.

Designed for mixed traffic duties, the J22s were built with Westinghouse brakes. Steam heating apparatus was later fitted to all of the J22s.

McDonnell was disliked amongst NER railway men for introducing a number of non-Fletcher design features. One of the most contentious changes was the use of left-hand drive. Most of the J22s were eventually rebuilt with right-hand drive, but a few were withdrawn still in their original left-hand drive condition.

W.Worsdell rebuilt all of the J22s between 1896 and 1904, with his own design of steel boiler. These had similar dimensions to the original boilers, although the water spaces were increased and the grate area was reduced slightly.

Although the J22s were much larger than anything McDonnell had designed for the GS&WR, they were not as powerful or robust as the existing '398' Class. The fitting of Worsdell boilers to both types, merely accentuated these differences.

The J22s were initially used for mixed traffic work and secondary passenger services. Due to their relative lack of power, they did not displace the '398' engines to lesser duties. Instead, both classes were displaced from main line traffic by T.W.Worsdell's compound Class C 0-6-0s and non-compound Class C1 (LNER J21).

It is interesting to note that although McDonnell has a reputation for standardisation, the J22s were built in three main variants. These were due to two different builders, and two different wheel sizes.

None of the J22s survived into preservation.

I am not aware of any models of the J22s in any scale.

Thank you to the Mike Morant Collection for the photograph of J22 No. 502 at Carlisle.