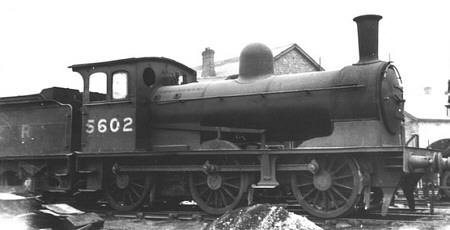 Wilson Worsdell succeeded his brother (T.W.Worsdell) as the Locomotive Superintendent of the North Eastern Railway (NER) in October 1890. T.W.Worsdell remained at the NER as a consultant for a further two years, during which time his successful J21 (NER Class C) mineral engine continued to be built. These were built as compound locomotives with Joy valve gear. Neither of these features found favour with W. Worsdell, who also considered the J21's 5ft wheels to be too large for a mineral engine. After T.W.Worsdell's final departure, he was able to amend the order for the final two batches to use simple expansion. The Joy valve gear and wheels had already been ordered, and these were kept. These last J21s were built in 1892 and early 1893.

By 1894, W.Worsdell had full authority to produce his own mineral locomotive design. He could have modified the J21 design to use Stephenson valve gear, simple expansion, and smaller driving wheels; but this would have resulted in a locomotive more powerful than the NER's requirements. Therefore he designed a smaller 0-6-0 mineral locomotive using the 10ft 3in long, 4ft 3in diameter boiler already in use on the F8 2-4-2T (NER Class A), D23 4-4-0 (NER Class G), and J73 0-6-0T (NER Class L) locomotives. This design became NER Class P, and later LNER Class J24. A total of seventy J24s were built between 1894 and 1898 in six batches. Gateshead built five batches of ten each, and Darlington built the last batch of twenty.

The choice of the smaller boiler on the J24 proved to be a good one. This allowed the J24 to efficiently meet the NER's immediate needs. As power requirements increased, the J24 design was modified in 1898 to take the J21 boiler, producing the J25.

The only significant rebuilding experienced by the J24s was the fitting of piston valves and superheaters. The opportunity was taken to fit superheaters at the same time as the piston valves. Twenty boilers with Schmidt superheaters were built between 1914 and 1916. These were fitted to J24s between 1914 and 1920, as they required new cylinders or valves. By 1920, it was decided that superheaters could not realise significant improvements in efficiency for the kind of short and intermittent work performed by the J24s. The fitting of superheaters stopped, but piston valves would be fitted to two further J24s in 1923-4. Over time, many of the J24s lost their superheaters as boilers were replaced or swapped. However in 1932-3, nine J24 boilers were built with Robinson superheaters. Superheated J24s could be identified by their longer smokebox (3ft 7.25in vs. 2ft 7.75in).

Unlike many NER types, the J24s fitted within the LNER Composite Loading Gauge and did not have to be cut down.

The J24s were built with Ramsbottom safety valves contained within a brass trumpet. As with virtually all other classes, the LNER eventually replaced these with Ross pop valves. Initially these had a casing, but the casing was later removed.

Designed as short-haul mineral locomotives, the J24s proved to be a good complement to the J21s which hauled the faster and more important freight. With their smaller wheels, the J24s could start heavy loads more easily, and keep them moving. They were initially allocated hauling the heavy coal trains between the Durham and Northumberland collieries and the local ports. By Grouping (1923), sixty of the J24s were still allocated to this work. The exceptions could be found at Selby (3), Blaydon (3), Northallerton (2), York (1), and Whitby (1).

During 1924, ten of the J24s were allocated to the Scottish area to replace the local J36s hauling local mineral traffic on lightly-laid branch lines. The J24s had a lighter axle loading which proved advantageous for this work. These ten were allocated to Haymarket (4), Parkhead (3), and Dunfermline (3). The Scottish enginemen did not have a high opinion of the J24s, although they appreciated the J24's powerful steam brake. The Scottish allocation of J24s remained in place, and five would still be working the Scottish branches at Nationalisation (1948).

The NE Area J24s continued their mineral haulage throughout the 1920s. The first significant re-allocations occurred in the late 1920s when the Cleveland Hills ironstone mines closed, causing the Rosedale J24s to be moved to Saltburn.

By the early 1930s, the trade depression was hitting heavy industry badly and many of the J24s were found to be surplus to requirements. The first withdrawals started in 1933, and fourteen were quickly withdrawn before the end of 1935. The rate of withdrawals slowed, and nine withdrawn in 1939 were brought back into service to meet wartime shortages. Withdrawals restarted in 1942, leaving only 34 to survive into British Railways (BR) ownership (1948). BR quickly withdraw the last J24s, with the last two being withdrawn in December 1951 from St. Margaret's and Newport.

Two J24s were sold to private owners. No. 1953 was withdrawn in May 1939 and sold to Harton Coal Co. Harton renumbered it No. 7, and eventually scrapped it in 1946. No. 5626 was sold to the National Coal Board (NCB) in November 1948 for use at Boldon Colliery. It was never renumbered by the NCB, and was scrapped at Whitburn Colliery in July 1956.

None of the J24s survived into preservation.

Furness Railway Wagon Co have a 7mm (O gauge) model of the J24 in development.

Thank you to Malcolm Peirson for the photograph of No. 5602.