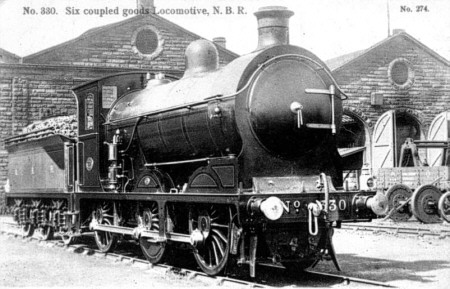 Reid appears to have been initally content with the numerous and sturdy J36 goods locomotives built by his predecessor, Holmes. However in 1905, the North British Railway (NBR) directors decided that it was time for a range of more powerful locomotives. This resulted in the introduction of the C11 4-4-2, D32 4-4-0, and J35 0-6-0 locomotives in 1906. Although smaller than the passenger C11s, the new J35 goods locomotives still managed to cause a sensation due to their larger size and higher boiler pitch compared to the J36.

The first two locomotives built at Cowlairs were built with fireboxes that were four inches shorter than the other J35s. They also had a different boiler tube arrangement that resulted in a greater heating surface. These two engines also had piston valves and were classified as J35/2 by the LNER. The remaining piston valve engines were classed as J35/1, and the slide valve engines were all classed J35/3.

One of the J35s (probably No. 329) was fitted with an experimental Phoenix smokebox superheater in 1911. The trial also included D29 'Scott' 4-4-0 No. 897. The trials were unsuccessful, and both locomotives had their superheaters removed.

The J35s were initially allocated to long distance goods duties, and could be usually found at the main terminal sheds. Over half were allocated to St. Margaret's, Eastfield, Carlisle, and Dundee. From 1914, the J35s were displaced from the best goods duties by J37s. From this time, the J35s were used increasingly for coal traffic and pick-up goods. During the summer, they could also be found on some main line passenger duties, especially between Edinburgh, Glasgow, and Fife.

Withdrawals started in 1946, but only six were withdrawn before Nationalisation (1948). By the time of British Rail (BR) ownership, the J35s were being used on local goods and mineral workings. BR paused the withdrawal programme until 1958. Withdrawals were much more rapid this time, and the last J35 was withdrawn in December 1962.

None of the J35s survived into preservation.

DJH produce a whitemetal kit of the J35 for OO gauge (4mm scale).

Thank you to Malcolm Peirson for the photograph of NBR No. 330.