Gresley designed the Great Northern Railway (GNR) Class J23 (LNER J51) 0-6-0T in 1913 for working the steeply graded lines in the West Riding. Designed to replace the J3, J4, and J7 tender locomotives, an 18.5in cylinder diameter was chosen to produce a greater power output. Also, as most of the work involved shunting and short trip workings, Gresley chose a tank engine design. The tanks increased the adhesive weight, which was particularly useful on intended steeply graded lines. Traditional Doncaster saddletanks were rejected in favour of full-length side tanks. These tanks were sloped forward to avoid obstructing the driver's view. Apertures were also provided to enable easy access to the motion. The long side-tanks would inspire the nickname "Submarine".

The first thirty J51s were built between 1913 and 1919 in three batches of ten locomotives each. These initial locomotives used 4ft 2in diameter boilers that were displaced from Ivatt Class R1 0-8-2Ts. In fact, much of the original J51 design was based around the size of these surplus boilers. The first batch had a short bunker and was classified J51/1 by the LNER. The prototype J51 had a poor weight distribution. This was solved by blanking off the front of the side tanks, and compensating for the lost water capacity with a new tank in the base of the coal bunker. This reduced the coal capacity, hence a longer bunker design was used on the second and third batches. These long-bunker J51s were classified as J51/2.

The prototype J51 (No. 3167) was also experimentally fitted with a 16-element Robinson superheater. Coal savings amounted to only 3.7%, and no further J51s or J50s were fitted with superheaters. The superheater was removed in 1930 when No. 3167 was rebuilt as a J50 (see below).

At about Grouping (1923), two more batches of ten each were built. Both batches were fitted with 4ft 5in boilers with shorter fireboxes. These boilers were surplus after withdrawals and re-boilerings of D4, J4, and J7 locomotives. The first ten were built in 1922 just before Grouping, and the second ten were built in 1924. Although the GNR classified locomotives with both boiler sizes as "Class J23", the LNER divided them into two classes. The locomotives with the wider boilers became Class J50.

The newly-formed LNER adopted the J50 as a Group Standard design, and between 1926 and 1939 a total of 52 more J50s were built. The Group Standard J50s had a slightly different cab profile to fit the Composite Gauge. Minor standardisation of parts also occurred, and they were switched from left-hand drive to right-hand drive. All of the Group Standard locomotives were built with steam brakes except for the last fourteen which reverted back to vacuum brakes.

All of the J50s and J51s were built at Doncaster except for the last fourteen locomotives. These were built in two batches between 1938 and 1939 at Gorton. In the 1930s there had been a general short-fall in medium sized shunting locomotive construction. Although the LNER kept planning new J50s, cancellations due to the Depression and various financial crises led to no new J50s between 1930 and 1938. Even though the fourteen Gorton J50s were built at the end of the 1930s, the problem was not solved until the immediate post-war period when the LNER purchased 75 'Austerity' J94 0-6-0STs.

In 1923, it was found that the axleboxes on the J50s and J51s tended to run hot. A survey in the last quarter of 1923 found that 31.2% of the locomotives ran too hot! This was traced to the axlebox journals that were the same size as those on the lighter and less powerful J52s. In January 1925, it was decided to fit five J50s with new driving wheels and axles with 7.75in diameter journals that were 7.5in long. Although the original bearings were kept on the leading and trailing axles, the larger bearings on the central axle proved sufficient to solve the problem. All new locomotives were built with the new bearing arrangement, and the existing locomotives were amended accordingly. 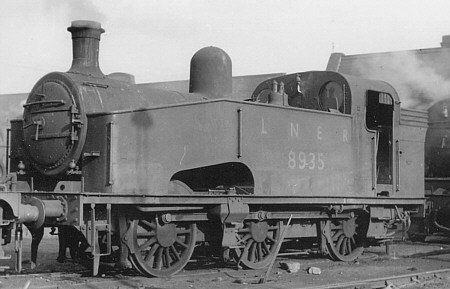 Intended for the West Riding, the initial J50 and J51 allocations were to Ardsley, Bradford, and Copley Hill. These engines were used for local goods and coal workings, with shunting at intermediate yards. There were also used for shunting the larger West Riding marshalling yards. During the 1920s, they were also occasionally used for passenger work, and for banking duties. 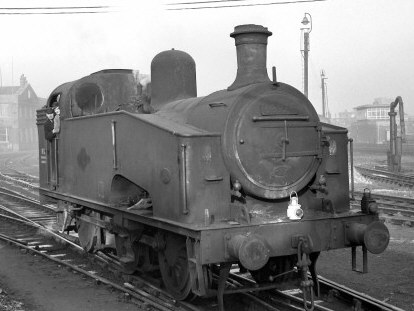 All of the J50s survived to Nationalisation (1948), when the allocations were to Ardsley, Bradford, Copley Hill, Doncaster, Colwich, Frodingham, Stratford, Woodford, Annesley, Sheffield, St. Margaret's, and Eastfield. Most were still allocated in the West Riding, with lesser numbers further afield.

In 1952, thirty J50s were allocated to Hornsey to work transfer trips to the Southern Region. These engines also occasionally worked on empty coach workings between Hornsey and Kings Cross. 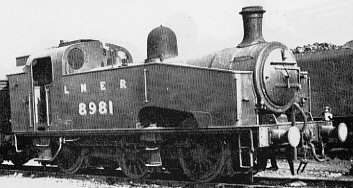 Finney and Smith produce a 3mm scale kit of the J50. A white metal kit is also available from 3SMR.

DJH produces a whitemetal kit of the J50 for OO gauge (4mm scale).

Thank you to the Mike Morant Collection for the photograph of J50/3 No. 68976 (Departmental No. 16) at Doncaster Works.