These three classes were closely related saddle tanks initially designed by Stirling for the Great Northern Railway (GNR). The J15 (LNER J54) locomotives were the GNR's first saddle tanks. The J17s (LNER J56) were a smaller version of the J15s; and the J16s (LNER J55) were rebuilt from J15s and J17s with domed boilers by Ivatt. There is often confusion between these three classes due to different boiler re-builds and the mis-classification of a number of locomotives by both the GNR and LNER.

Ten J17s (LNER J56s) were built between 1876 and 1877. These were very similar to the J15s but had shorter frames, firebox, and wheelbase. The boiler remained 4ft 0.5in in diameter, and continued the Stirling tradition of being domeless.

The LNER further sub-divided Class J54 according to the cab type. Class J54/1 indicated the original Stirling design with open cabs and 4ft 0.5in diameter boilers. Class J54/2 indicated locomotives with enclosed cabs. After Grouping (1923), many of these were fitted with 4ft 2.5in diameter domed boilers. 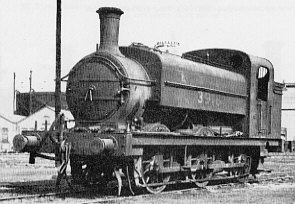 The J54s, J55s, & J56s were allocated throughout the GNR network. By Grouping (1923), the heavier shunting duties had been taken over by the Stirling J53 & Ivatt J52 0-6-0ST shunting locomotives and the West Riding duties had been taken over by the first of the Gresley J50 & J51 0-6-0T locomotives. Hence, they were relegated to lighter shunting duties, and were often allocated to smaller provincial sheds.

The withdrawals started as early as 1902. By Grouping (1923), eleven J15s, two J16s, and three J17s had been withdrawn. These were either scrapped or sold. At least one of these locomotives was recorded as surviving until 1956: No. 601A made its way to the NCB Wellesley Colliery, Fife and was eventually scrapped in May 1956.

Thank you to Malcolm Peirson for the photograph of J56 GNR No. 855.