The Great Northern Railway (GNR) had begun superheating experiments in 1908, and by 1911 had developed enough experience to justify the construction of standard superheated boilers. These boilers would become LNER Diagram 7, and were initially used on fifteen goods locomotives intended to replace older "Standard Goods" engines (LNER J4). These locomotives were the final development of the Ivatt 0-6-0 goods locomotive, and followed a traditional Doncaster outline. As well as introducing superheaters, these were the first GNR goods locomotives to use piston valves. Despite these innovations, the GNR classified them as Class J22 - the same as the earlier slide valve engines (LNER J5). The LNER recognised the superheated engines as being different, and gave them the classification of J6.

Ivatt retired at the end of 1911, but construction of the J6s was continued by Gresley until 1922. The Gresley locomotives had their boilers set slightly further back, making the fireman's job easier. The rear axle horn blocks had to be redesigned to allow this re-positioning of the boiler; and a shorter cab was fitted. The sandboxes were moved from below the running plate, to above it. A total of 95 Gresley J6s were built in ten batches at Doncaster. A final order for ten J6s was placed in 1922, but this was replaced by an order for N2 0-6-2Ts instead. Including the earlier Ivatt engines, a total of 110 J6s were built.

The first twenty five J6s were built with 18-element Schmidt superheaters. Six J6s were fitted with 'Doncaster straight tube' superheaters in about 1913. These boilers had separate saturated and superheated headers which were connected by six vertical headers that secured the elements. The Robinson superheater was also used for five locomotives in 1913. All three superheater types had identical tube arrangements and hence identical heating surface figures. They only differed in the manner that the elements were secured to the header. A fourth design was also introduced in 1913. No. 563 was built with the Gresley 'twin tube' superheater. This design had only seventeen elements, but a 10% increase in superheated heating surface. No. 563 received a 'triple tube' design in 1915. Despite all these trials, all later J6s reverted to 18-element superheaters. Nine were of the Schmidt type, and the remainder used the Robinson design. The LNER chose the Robinson superheater as a Group Standard, and started to standardise the J6s from 1927. By January 1930, all of the J6s were fitted with 18 element Robinson superheaters. 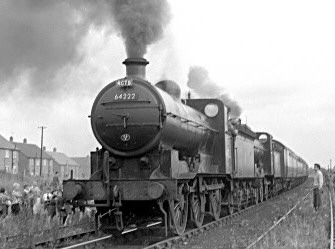 All of the J6s were fitted with Ramsbottom safety valves, but the LNER gradually replaced these with Group Standard Ross pop safety valves.

To improve conditions when reverse-running, four J6s received weatherboards in 1956. These weatherboards were taken off withdrawn J52 0-6-0STs.

The J6s were mainly used in the GNR's provincial districts, especially from New England, Colwick, and Doncaster. They were used for a wide variety of duties. Initially, they worked express goods trains until they were displaced from these duties by the introduction of K1 & K2 2-6-0s. Another early duty, was the working of coal trains from Colwick to Hornsey.

The J6s acquired the nickname of "Knick-Knacks" due to the noise that they made when running with the steam shut-off.

By Grouping (1923), the J6s were rarely seen on main line duties. Instead, they found work hauling a wide variety of short distance goods and coal trains. In 1923, the J6s were allocated to Colwick (40), Doncaster (29), New England (16), Trafford Park (8), Boston (7), West Riding District (3), Grantham (3), London District (2), Hitchin (1), and Lincoln (1). The Nottingham J6s were noted for their versatility, where they were equally at home hauling heavy coal, beer from Burton, or speedy passenger excursions to the Lincolnshire coast. For locomotives designed principally for freight traffic, the J6s were surprisingly fast at hauling passenger traffic. On a number of occasions they were recorded reaching 66mph. They were also scheduled on the tightly timed Grantham to Nottingham to Derby passenger services, before the arrival of the Thompson L1 2-6-4Ts.

World War 2 did not disperse the J6s as much as some classes. However, they were occasionally seen in unusual places, such as Tyneside and Haymarket. Seven were moved to the North East Area (Neville Hill and York) in 1940 to replace J25s which had been loaned to the Great Western Railway (GWR). All were returned before the end of 1942.

All of the J6s survived into British Railways ownership (1948), and withdrawals did not begin until August 1955. Withdrawals were initially slow, but accelerated after 1958. The last two J6s were withdrawn in June 1962.

None of the J6s survived into preservation.

The 3mm Society produce a kit of the J6 for 3mm scale.

Fourtrack Models sell a kit of the J6 in O gauge. The picture to the right shows this kit constructed by Steven Rowe. ACE Products also sell a kit.

Thank you to the Mike Morant Collection for the above J6 images.