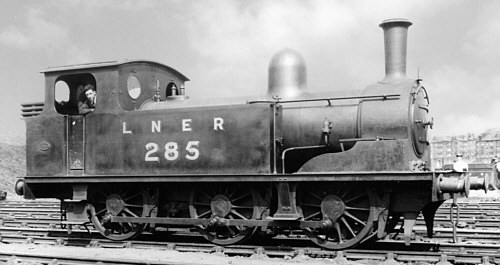 When T.W. Worsdell arrived at the North Eastern Railway (NER) in 1885, he was faced with a significant backlog in boiler repairs and replacements. This was partly because the boiler shops at Gateshead were being reorganised. It was also partly due to the large numbers of locomotives built during the early 1870s coming up for boiler replacements. Many of these locomotives were short-coupled saddletanks such as the '44' Class locomotives, which found little favour with T.W. Worsdell. Therefore T.W. Worsdell introduced a replacement standard shunting engine in 1886. Unlike his other standard types, the new Class E (LNER J71) engines lacked Joy valve motion and compound expansion. Therefore they were really a side tank development of the existing '44' locomotives.

The J71s proved to be a good standard shunting engine for the NER's needs, and 120 were built between 1886 and 1895. Production only ceased when W. Worsdell (T.W. Worsdell's brother) took over and fitted smaller wheels and larger cylinders to produce the J72 (NER Class E1).

Some second-hand material was used during the building of the first batch of ten J71s. Nine of these had 4ft wheels instead of the class standard 4ft 6in wheels. It appears that eight received the correct 4ft 6in wheels before they were withdrawn, although records are patchy.

Another variation on the early locomotives, was that of the frame ends. The first eighteen J71s had square-cut frames which ended below the buffer beams. Angle brackets were fitted to hold vertical oak planks. These planks acted as buffers when moving the NER's characteristic cauldron wagons.

The same boiler design was used on the J72, and boilers were swapped indiscriminately between the two classes after Grouping (1923). The thickness of the butt-jointed barrel plates was increased from from 3/8in to 7/16in before Grouping (1923). 1/2in thick plates were fitted after 1936. The earlier boilers were fed through clack boxes on the side of the boiler barrel ahead of the side tanks. Later boilers were fed via the faceplate. Ramsbottom safety valves were initially fitted, but Ross pop valves were fitted after 1914. Escaping steam from the pop valves could obscure visibility during shunting, so many crews fitted covers around the valves. This was eventually recognised by the workshops, and 'official' Ramsbottom-style covers were fitted from about 1938.

The J71s used for pilot duties in the Newcastle and Gateshead areas, had a red spectacle glass mechanism fitted. A lamp was fitted on a special bracket on the right side of the smokebox, and the red spectacle glass could be turned in-front of this. The glass was operated by a rod that passed into the cab. Hence, the driver could change the lamp colour to red without leaving the footplate. This was fitted before Grouping, and remained in use until after Nationalisation (1948).

The J71s had steam brakes as standard. Some of the J71s also had vacuum brakes fitted for passenger pilot duties after 1909. A small number of J71s were dual fitted with Westinghouse brakes. At Grouping (1923), most of the J71s had single steam brakes, although all combinations of dual braking also existed.

Many of the J71s were allocated to the coastal ports served by the NER. The J71s were well suited to the sharp curves and weight restrictions found in most docks. Many were also used for local trip work to and from the freight depots and wharves. The J71s were also a familiar sight as station pilots on the East Coast route. Two (Nos. 237 and 1167) were specially maintained for passenger pilot duties, and served at York for over sixty years. Another two (Nos. 263 and 1142) were used for towing dead engines at Darlington Works. The wagon shops at Shildon also used J71s to move crippled wagons.

By Grouping (1923), the 120 J71s were allocated to 22 sheds, and they continued their NER-era duties into LNER ownership. Despite their wide usage by the NER and LNER, Heaton was the only shed north of the Tyne to received J71s. After Nationalisation (1948), Tweedmouth would also receive one J71.

The locomotives fitted with 16.75in diameter cylinders had a tractive effort of 13,300lb. 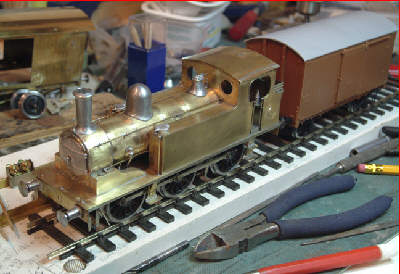 None of the J71s survived into preservation. 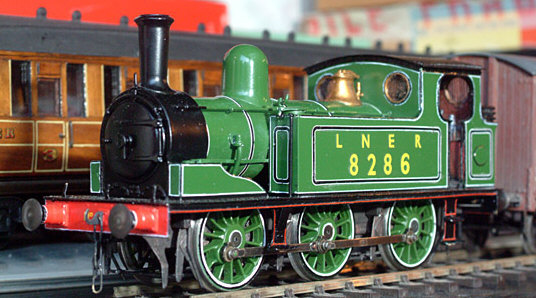 Finney and Smith produce a 3mm scale kit of the J71.

Jim McGoewn of Connoisseur Models sells and etched kit of the J71 for 7mm scale (O gauge). In the past he has produced a 4mm version, but this has been discontinued.

Thanks to Geoff Byman FRPS who provided the above pictures of his Connoisseur Models O gauge J71 and Parkside 10 ton fish van.