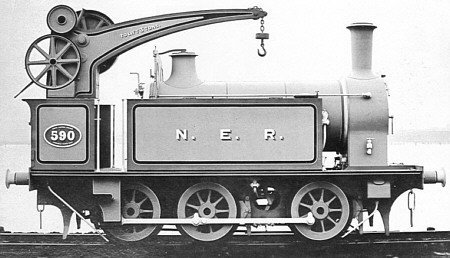 These two crane engines were built by the North Eastern Railway (NER) in 1888 for use at their Gateshead Works. Based on the existing Y7 0-4-0T design, the J78s had their rear ends modified to take an extra coupled axle. This axle provided increased stability for the 3 ton steam crane which was fitted at the rear. Both the boiler and the entire front section of the locomotive was identical to that of a Y7.

Both J78s were built with low weatherboards, but these had been replaced with half-cabs before Grouping (1923). Another pre-Grouping change, was the lengthening of No. 590's jib from a working radius of 10ft 6in to 12ft. This resulted in a corresponding reduction in working capacity by 50cwt. Both engines had their safe working capacities clearly marked on their crane arms.

Both J78s were built for use at Gateshead Works, and No. 995 served most of its NER and LNER days at Gateshead. By 1907, No. 590 was working at West Hartlepool, where it would stay until 1920. Between 1920 and 1924, No. 590 was seen at a number of locations including Darlington Works, Percy Main Works, and Springhead Works. Its final allocation was to York North Shed to act as the shed pilot. A shed pilot did not require a crane, and by this point in time the LNER rarely used the cranes on either of the J78s.

Both J78s were loaned to the Admiralty for 3 months in 1918. During this time, they saw service at Immingham Docks.

Neither of the J78s survived into preservation.