As with many older North Eastern Railway (NER) types, the '1001' classification was used to cover a range of similar locomotives. The class started life in 1852 when the Stockton & Darlington Railway (S&D) ordered six locomotives from Gilkes, Wilson and Co. of Middlesbrough. At the time, these engines were known as the 'Hippopotamus' Class, and they were followed by many more engines built by a variety of different manufacturers. Although the S&D merged with the NER in 1863, locomotive management remained separate for a long period of time, and construction of new '1001' locomotives continued until 1875. There is some evidence that the original batch of six engines suffered some significant problems. Two were withdrawn after only eleven years, and the others were substantially rebuilt. Later batches experienced less rebuilding, and the rebuilding history of No. 1275 (see below) was typical.

The '1001' class was one of Bouch's "long boiler" 0-6-0 designs. These locomotives had the entire weight of the engine on the six driving wheels. The boiler was notably long, but the fire grate was small - especially when compared to later design principles. This basic design concept was perpetuated on the S&D for a long time, and was decidedly old-fashioned in its later years. Despite this, the design actually suited typical S&D mineral workings. These workings were generally short and involved lots of waiting for signals or loading. The waiting allowed the locomotive time to build up pressure in its large boiler. The short workings meant that boiler pressure could be sustained long enough for the working to be completed. Hence the small grate did not provide a significant limitation, but actually contributed to economic running. 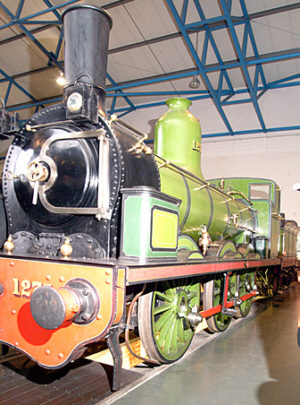 A McDonnell-pattern boiler was fitted in August 1883. This boiler was 4ft 1in diameter and had 190 tubes. This was followed by a standard W.Worsdell boiler in June 1896. This new boiler had wider water spaces than the earlier McDonnell boiler. When No.1275 entered LNER ownership, it was still fitted with a Worsdell boiler, although this was a secondhand one that was fitted in July 1906 (from No. 1014).

The S&D used the '1001' locomotives for the majority of its mineral workings for a very long time. By the 1870s, when No. 1275 was introduced, they saw extensive use hauling Durham coke to Barrow via Stainmore Summit. They also hauled haematite ore from Whitehaven to Kirkby Stephen via the Cockermouth Keswick & Penrith line and the Eden Valley.

By 1906, many were still being used on the steep lines in the Loftus area. Although they were still held in very high esteem, they were used for less arduous work during their later years. A clear exception was the exposed Rosedale branch. Here, a number of '1001's were used to haul ironstone to the head of the Ingleby incline. Nos. 1255 and 1286 survived on this duty until 1921 when they were replaced by J24s. In these later years, No. 1275 was allocated to Malton and was used to haul local goods services to Whitby. The Malton shed is noted for keeping No. 1275 in a very clean condition, and O.S. Nock described his first-hand experience of the pride that the Malton enginemen had for what was already an antiquarian engine.

No. 1275 entered into LNER ownership with an official mileage of 908,984 miles. Still in its NER livery, it was quickly withdrawn on 16th February 1923. It was restored ready for the 1925 Stockton & Darlington Centenary celebrations, where it was also steamed. The restoration attempted to bring No. 1275 back to its original condition but the Worsdell boiler was retained. No. 1275 survives in this condition at the National Railway Museum, York.

No LNER drawing was produced, and the following details are from the final drawings for the Dübs batch of 1874. 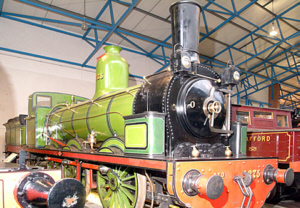 No. 1275 was the only member of the '1001' Class to enter LNER ownership. The LNER quickly withdrew it and restored it for the Stockton & Darlington Centenary. Although the W.Worsdell boiler was kept, many of the original fittings were re-fitted. No. 1275 is now a part of the National Collection.

Thank you to Malcolm Peirson for the photograph of NER No. 2259 in original condition.

Thank you to Geoff Byman FRPS of the photographs of No. 1275 in the National Railway Museum.