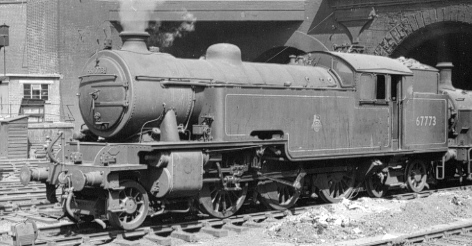 The Great Northern Railway (GNR) and LNER both had a number of plans for a heavy passenger 2-6-4T tank engine. These plans were cancelled in favour of the N2 0-6-2T, and a 1927 Stratford scheme were cancelled after the Southern Railway experienced a series of 2-6-4T derailments.

Thompson became the CME in 1941, and quickly produced a standardisation programme that listed the existing V3 2-6-2T as the standard heavy passenger tank engine, replacing the A5 4-6-2Ts, N2 0-6-2Ts, and some N5 0-6-2Ts. Later, the V3 requirement was replaced with a new 2-cylinder 2-6-2T with smaller wheels and a tractive effort of 32,080lb. It was noted that this new locomotive might have to be a 2-6-4T. By January 1943, the Running Department had requested a modern version of the LPTB L2 2-6-4Ts. All orders for the V3s were cancelled or postponed, and plans were prepared for the new 2-6-4T. The boiler was based on the V3 but with a larger firebox and longer water tanks.

Attempts to widen the boiler diameter were made, but this proved impossible without reducing the water capacity. A tapered boiler design was prepared, but was quickly rejected by Thompson. A 5ft parallel boiler was used instead.

For the pony trucks, Thompson departed from Gresley's preference of a double swing link suspension. Instead, he chose a design using helical control springs copied from the LMS-designed O6 2-8-0. A similar spring design was fitted to the V2 2-6-2s after poor maintenance of their double swing link suspension mechanisms caused a series of derailments. The bogie design was similar to that of A1/1 Great Northern which was also being rebuilt at the same time. The cylinders were of the same design as the The B1 cylinders.

Thirty of these new L1 locomotives were authorised in April 1944, and the first locomotive (No. 9000) was completed in May 1945. This was the only tank engine built by the LNER that was painted in lined apple-green livery. The LNER's 1945 Modernisation Plan included a total of 110 locomotives, including No. 9000. Although the first order was placed in 1944, No. 9000 would remain the only L1 in service until Nationalisation in 1948. In 1948, Darlington built the remaining twenty nine locomotives from the original order of thirty. The plan for 110 was eventually reduced to 100, with the remaining 70 built by the North British Locomotive Co. and Robert Stephenson & Hawthorn, between 1948 and 1950.

No. 9000 was completed in May 1945, and immediately started a comprehensive series of trials that continued into early 1947. These trials are thought to be the most extensive ever arranged by the LNER for a tank engine, and included everything from express passenger services to heavy shunting. Initial trials were based at Stratford and included suburban services out of Liverpool Street. It also ran trials on express passenger services and stopping passenger services. It easily performed these duties and recorded lower coal consumption figures than the various comparison locomotives. The GE Section also reported that the L1 rode better than any other class that they were using, and the view from the cab when running backwards was an improvement over that of the V3. The GN and GC Sections also ran passenger trials with No. 9000 with similar results. For freight workings, No. 9000 was trialed on duties usually performed by J50 0-6-0Ts, K3 2-6-0s, O4 2-8-0 RODs, and Q4 0-8-0s. The GN Section O4 and Q4 duties were handled satisfactorily, but No. 9000 had severe problems holding heavy trains on gradients on the GC Section. This is not surprising, as a heavy goods locomotive with tender such as an O4 typically had about double the braking capacity of an L1 tank engine.

The L1 axleboxes also tended to overheat. One reason for this is thought to be the sharp curves at the end of the platforms at terminal stations, placing undue stresses on the frames. Water from the leaking side tanks is also thought to have contributed to axlebox wear. In an attempt to reduce axlebox wear, five of the Neasden L1s had liners fitted to their cylinders in May 1951. These liners reduced the cylinder diameters from 20in to 18.75in and the tractive effort from 32,080lb to 28,180lb. The first appeared to be successful, but the other four L1s continued to suffer from axlebox problems. The experiment was not deemed a success, but the liners were not removed. In March 1953, Neasden converted five L1s to run at 200psi rather than 225psi. This was another attempt to reduce the piston load and hence the axlebox wear. This experiment was also a failure and by 1955 some of the L1s were described as being in a 'deplorable' condition with a whole host of problems associated with axlebox wear. This second experiment was finished in October 1955 and all five locomotives switched back to 225psi.

After the trials, No. 9000 ran for a few months in the Edinburgh area before entering service at Stratford. The first batch of twenty nine product L1s were allocated to Stratford, Neasden, and Botanic Gardens (Hull). Six of the next seventy were allocated to Eastfield for use in Scotland. However, their routes were restricted by electrification in the Glasgow area and they were sent to Eastfield in exchange for V1 and V3 2-6-2Ts. After all one hundred L1s were delivered at the end of 1950, they were concentrated at Stratford, Neasden, and Ipswich; with smaller numbers at Kings Cross, Hornsey, Hitchin, Norwich, Lowestoft, Darlington, and Botanic Gardens. This would be the basic distribution until the first diesel multiple units were introduced in 1955.

The L1s generally hauled passenger services in the areas operated by these sheds. Suburban and stopping passenger services were the most common, but occasionally they would haul express services, as well as some freight and colliery traffic. Over time they would replace older tank locomotives such as F5 2-4-2Ts, F6 2-4-2Ts, C12 4-4-2Ts, and G5 0-4-4Ts; and were in turn displaced by diesel multiple units and electrification.

Withdrawals started in 1960 and were quick. The last L1 was withdrawn in 1962. Their quick withdrawal was forced by the rapid introduction of diesel multiple units, rather than perceived design deficiencies.

The last Thompson L1 was withdrawn in 1962, and none survived into preservation.

Thank you to the P.H. Groom collection for permission to use the above photograph of BR No. 67773 at Kings Cross.

Thank you Malcolm Peirson for the photograph of LNER No. 9000.