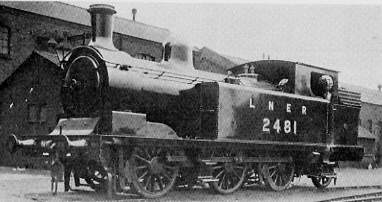 After a very poor start for its first fifteen years, fortunes were looking up for the Hull & Barnsley Railway (H&BR) at the beginning of the 20th Century. Coal traffic was growing, new pits were being sunk in its area, and the new Wath Branch was due to open in 1902. Although the H&BR had twelve 0-6-0 engines for shunting, these were the oldest locomotives owned by the H&BR. The H&BR urgently needed new locomotives for shunting and assembling coal trains. This was solved by an immediate purchase of these five 0-6-2Ts from Kitson in 1901, and by Matthew Stirling designing nine more 0-6-2Ts (H&BR Class F2, LNER Class N12).

The five N11s were initially built by Kitson & Co for the Lancashire Derbyshire & East Coast Railway (LD&ECR), but the order was cancelled due to an inability to pay. One was actually delivered but never entered service before being returned. The existing LD&ECR N6 0-6-2Ts were virtually the same as the N11s, but the LD&ECR rebuilt their locomotives with Belpaire fireboxes whilst the N11s kept their original round-topped boilers. Hence the LNER gave the two groups different class designations.

The N11s were very different to the existing H&BR locomotives, having domed boilers, square-topped cabs, and squat built-up chimneys. By Grouping (1923), the chimneys had been replaced with the H&BR cast type.

The boilers were over twenty years old and in need of replacement, when the North Eastern Railway (NER) took control of the H&BR. Darlington designed a new domed boiler based on the saturated boiler used on the D17 4-4-0. Unfortunately they were not able to make the boilers interchangeable due to changes in size, and only five new boilers were built. The entire class was re-boilered in 1923-4. The N11s were built with Ramsbottom safety valves, but all of the new boilers were fitted with Ross pop safety valves.

The N11s were initially used as bankers on the branch line from Wrangbrook Junction to Denaby. This branch was built to carry coal, but it also carried passenger services until 1903. To handle the passenger services, the N11s were equipped with vacuum brakes. Occasionally they worked through trains to Cudworth and on short goods trains to Hull.

With the introduction of Q10 0-8-0s on the coal trains, the N11s were moved to marshalling yard duties. By Grouping (1923), they were allocated to Cudworth and Springhead for shunting. No. 2479 shunted the timber yards at West Hartlepool between 1930 and 1936. Otherwise, the N11s spent the rest of their lives working these marshalling yards, and hauling occasional trip workings to the docks.

The last N11 was withdrawn in 1946, and none survived into preservation.