Parker introduced the 0-6-2T arrangement to the Manchester Sheffield & Lincolnshire Railway (MS&LR, later GCR) in 1889 as the N4. The basic design proved successful, and in 1891 he revised the design to produce the LNER N5. The MS&LR would classify the N5s as 9F, and used class 9C and 9O for two variants (see below). The revision replaced the original Joy valve gear with Stephenson link motion. He also replaced the round-topped firebox with a Belpaire firebox. In fact, the N5 prototype MS&LR No. 7 was the first locomotive built for a British railway to use the Belpaire design. The neighbouring Beyer Peacock & Co had been using them for a few years, but all of these locomotives were built for export.

Due to the experimental nature of No. 7's firebox, eleven months elapsed before the second locomotive (No. 47) was built. This was followed shortly afterwards by a third, No. 171. This experimental batch of three became class 9C. This length trial period appears to have proved useful because a weakness in the valve gear layout was identified. The valve rods were supported by tubular slide bars fixed to the motion bracket, with the motion bracket positioned in-front of the rocking shaft. All of the production locomotives had a slightly different arrangement and were classified 9F. These had suspension links fixed in-front of the motion plate, supporting the valve rods. The rocking shaft was also behind, and this gave an indirect drive to the valve via a spindle link. This arrangement proved highly successful and was used on virtually all subsequent MS&LR/GCR locomotives and Gresley's J38s and J39s.

The design was also ordered by Parker's successors, Pollitt and Robinson, resulting in a total of 131 N5s being built between 1891 and 1901. A total of twelve batches including the experimental batch were built.

Four of these locomotives worked with other railways. Nos. 754-5 were sold by the MS&LR to the West Lancashire Railway in 1894 and painted purple. The Lancashire & Yorkshire Railway took over the West Lancashire Railway in 1897 and retired the two 9Fs in 1914. The other two were ordered by the Wrexham Mold & Connah's Quay Railway (WM&CQR) in 1896, and were numbered 17 & 18. The Great Central Railway (GCR) absorbed the WM&CQR in 1905 and renumbered these two engines 409 &. 410 respectively. This brought the GCR's total roster to 129, all of which entered LNER ownership in 1923. It should also be noted that the WM&CQR hired three further 9Fs from the MS&LR/GCR between 1896 and 1901. 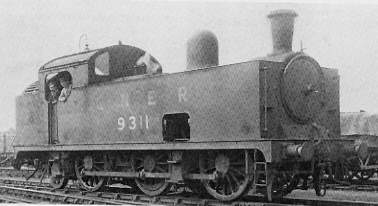 With construction occurring over eleven years and twelve batches, they were built with a number of boiler of variations. The main trend was a general reduction in the heating surfaces of the boilers. The last six locomotives were built with what would become LNER Diagram 21. This boiler design was eventually fitted to all of the N5s. This boiler was one of the first that Robinson experimented with superheating, and a total of ten N5s had superheaters fitted between 1915 and 1923. All of the superheaters would eventually be removed. The last was removed in 1943, although No. 5410 was withdrawn in 1936 before its superheater was removed.

The first N5 to be superheated was No. 771 (LNER No. 9311) in November 1915. This was also rebuilt to increase the coal and water capacity. The smokebox was extended to take the new superheater, but the side-tanks were also extended to be inline with the front of the new smokebox. The tanks had openings to allow maintenance of the valve motion. The sides of the coal bunker were raised, and the back was curved at the top. The radial trailing axle was replaced by a pony truck, allowing tighter curves to be negotiated. When the superheater was removed in 1930, the extended bunker, tanks, and smokebox were retained. The GCR classified No. 771 as 9O, and the LNER gave it the sub-class of N5/3 in 1938. It is thought that the modifications were to allow No.771 to haul a shuttle service between Chester and Connah's Quay. However, it only worked this service for fourteen months before being re-allocated and never hauled another passenger service.

In common with most of the GCR locomotives, the original chimneys were replaced with shorter chimneys and domes to fit within the LNER Composite Loading Gauge. Unmodified locomotives were given the sub-class of N5/1, whilst the modified locomotives became N5/2. These modifications occurred between 1925 and were completed in 1938. The N5/2 designation was eventually dropped.

The N4s and N5s became the GCR's standard shunting and trip working locomotives. After finishing the last N5, the GCR only built specialised shunting locomotives, e.g. for dock and hump shunting. At Grouping, the N5s were distributed amongst twelve sheds, with large allocations at Gorton and Mexborough. Shortly after Grouping (1923), the LNER purchased large numbers of ROD O4 2-8-0s which displaced older J11 0-6-0s onto the Mexborough trip working duties. This dispersed Mexborough's N5 allocation throughout the GC system. The displaced N5s tended to take over J58 and J59 saddletanks which were being withdrawn at the same time.

In the late 1930s, the J11s also displaced many of Gorton's N5s to other duties. Some moved to Trafford Park where they hauled passenger services, and replaced J10s on their shunting duties.

N5s were scarce in the Sheffield and Staveley areas of the GC network until they started to replace the first N4s withdrawals.

During the 1940s, a number of N5s were allocated to the GN Section. N5s allocated to Bradford hauled passenger trains to Halifax via Queensbury. Copley Hill had an allocation that acted as the Leeds Central station pilot, but also hauled a number of local services during World War 2. Retford and Newark also had allocations for shunting work.

The first withdrawal occurred in 1936, but only eight had been withdrawn by 1945. The remaining 121 locomotives all survived into British Railways ownership (1948). The rapid introduction of diesel shunting locomotives during the 1950s took their toll and withdrawals of the surviving N5s in the late 1950s was rapid. Many were stored during this time. Two of these stored locomotives were moved to Tyne Dock for banking duties, but this appears to have been unsuccessful as they were moved to New England after a few months.

Sheffield (Darnall) had the last large allocation, and these were replaced in 1959 by diesel shunters. Nineteen N5s survived at the beginning of 1960, and all were withdrawn before the end of the year. The last N5 was withdrawn from Gorton in December.

No. 5771 differed from the following details having 18.5in diameter cylinders, and a tractive effort of 19,842lb. The Full Weight was officially quoted at 62tons 18cwt, but was probably closer to 66 tons. The adhesive weight was quoted at 50tons 18cwt and the maximum axle load was 18 tons.

The last N5 was withdrawn at the end of 1960, and none of these pioneers of the Belpaire firebox survived into preservation. 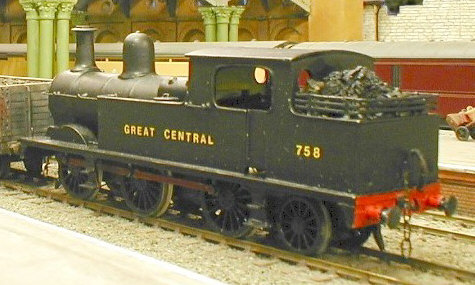 South Eastern finecast produce a 4mm scale kit for the N5. Judith Edge kits also produce a series of 4mm scale brass etches for the N5. Millholme and McGowan have both also produced kits of the N5 for OO gauge (4mm scale), but the current availability of both kits is unknown.

Haywood Railway sell a kit of the N5 for 7mm scale (O gauge).

Thank you to 'Colombo' (from the forums) for the photograph of Arnie Buxton's 4mm N5 model running on his York layout.